Background: Presence of macro and microdisease in the neck in cases of Oral carcinoma is a major barrier in full recovery of the patient. Conventionally the problem has been handled by Neck dissection popularly referred to as Radical Neck dissection and its many variants like Modified neck dissection and supraomohyoid dissection. The surgery assumes that removal of the fat containing lymph nodes is effective in spread of the disease. The major stumbling block is presence of extra nodal spread in enlarged lymph nodes. Percutaneous lymph node laser ablation (PLALN) is becoming more popular in many centers for necrosing the lymph nodes effectively without the neck dissection. There are obvious advantages and disadvantages to this procedure. This study was aimed at verifying the effectiveness of the procedure and aimed to understand the reason for success and failure if any. Attempt has also been made to understand the Anatomy of Neck Lymphatic system and understand the cellular structure of lymph nodes which would make the procedure effective.

Patients and Methods: 46 patients were of oral carcinoma were included in this observational study. These patients were having Metastatic lymph nodes on Ultrasonography and MRI scans prior to the procedure. The primary tumours were handled by Laser ablation and PLALN was carried out as a part of the procedure.

Conclusion: PLALN is an effective procedure for handling of Metastatic lymph nodes in early stages.

Thermal ablation is gaining popularity in destruction of tumours in various centers of the world. (Emiliano). Laser ablation is now a recognized procedure approved by USFDA for soft tissue tumours [1].

Main methods of laser Ablation include [2].

Laser offers a controlled thermal ablation with real time visualization under sonography control. In all recent studies therefore laser is becoming increasingly popular in multiple clinical conditions for soft tissue tumours namely Liver, Lung, Thyroid, Oral malignancies [3-7]. Laser ablation for Unresectable Mesentric lymph nodes has been performed with promising results [8]. Lymph nodes are present in a majority of oral cancer patients. Enlarged lymph nodes present as swelling in the submandibular region (Figure 4). In late stages of Carcinoma of oral cavity lymph nodes more than 2.5 cms were present. Most of these lymph nodes had a breach of capsule (Figure 10). Conventionally Lymph nodes in operable cases are handled by neck dissection. The extent of dissection may vary depending on the severity of the case [9]. PLALN was a part of procedure of ablation of Primary Carcinoma through laser ablation [6]. To understand the efficacy of PLALN one must take a look at the anatomy of a lymph node and the lymphatic system. The neck lymphatic system is divided into lymphatics and lymph nodes draining into subclavian vein. Metastatic cells traverse the lymphatics to reach the lymph nodes. Important observation is that they do not multiply in the lymphatics since there is no blood supply inside, but serve only for transit passage for the lymph nodes. The lymph node has an afferent artery and lymphatic vessels and efferent veinule and lymphatic vessel. It is covered by the capsule (Figure 1). 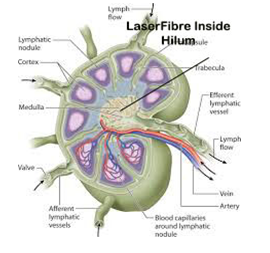 Figure 1: Anatomy of Lymph Node with laser fiber in Hilum.

Any increase in volume due to metastasis is reflected in the following way (Figure 8).

Destruction of fatty hilum by laserising it effectively devasucalrises the lymph node and leads to necrosis of the lymph node. (Figure 9). This causes a direct and indirect necrosis of the metastatic cells. Over a period the necrosed lymph node is reabsorbed (Figures 5, 6 and 7). The Radical neck dissection (RND) in late stages of Oral carcinoma has a high recurrence rate especially in enlarged lymph nodes [10]. The recurrence rates in stage 4 lesions are ranging from 30 to 70% [11, 12]. There is however no significant survival noted in the extent of RND [11]. On examining through the literature we could not find any reference as to the reason for recurrence after RND and nature of recurrence.

Our group postulated the reason for metastatic deposits as thus below

46 patients were included in the study (Figure 2) The procedure was explained in detail to the patients. The procedure was carried out under General anaesthesia. All patients had a primary oral carcinoma which was handled by Laser Ablation. The PLALN was a part of the procedure. The lymph nodes were visualized under sonography control and an 18 No needle was manipulated percutaneously to the center of the lymph node (Figures 3, 8). The fiber was activated and the center of lymph node was laserised including the surrounding upto the capsule. Larger lymph nodes had laserisation upto and including the capsular area. The result was a hyperechogenic lymph node (Figure 11).

All patients tolerated the procedure well. There was no intraoperative complications. 8 patients had a hematoma which was managed by compression. Most lymph nodes showed a full regression in 2 months (Figures 4-7). Results have shown that efficacy of the procedure is inversely proportional to the size of the lesion due to extracapsular spread in larger lymph nodes (Figure 3). 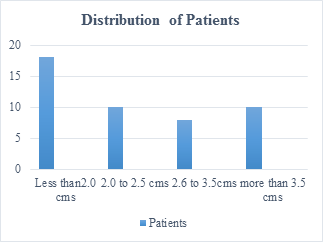 Figure 2: The distribution of patients with size of lymph nodes. 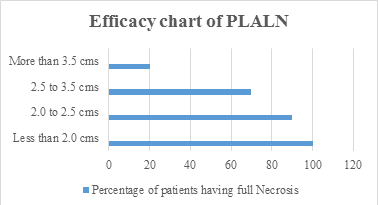 Figure 3: Percentage of patients having 100% necrosis grouped by size of Lymph Nodes Visualized on sonography after 4 weeks. 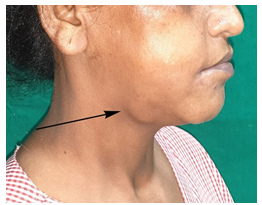 Figure 4: Lymph Node swelling with Arrow pointing to the swelling. 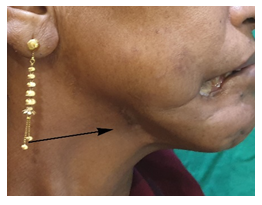 Figure 5: Arrow pinting to resoluton of Lymph Node. Oral deformity due to Laser ablation at angle of mouth involvement. 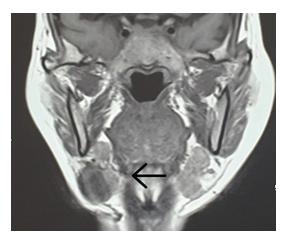 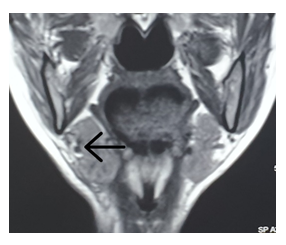 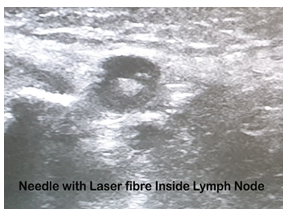 Figure 8: Needle with Laser fibre inside Lymph Node. Note round shape and lack of fatty hilum. 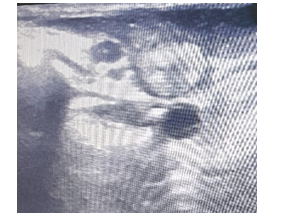 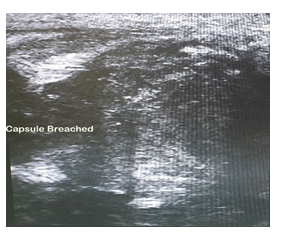 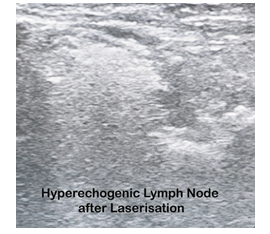 With rapid development of imaging technology, Surgery is becoming more focused and minimal. Laser ablation is playing a very important part in this regard [1, 6, 14]. The most common methods used are Radiofrequency and laser for ablation techniques [7]. Laser ablation of lymph nodes is being practiced in select centers due to different skill sets requirements from conventional surgery. The laser destruction of tissue including tissue protein denaturation, coagulative necrosis, tissue liquefaction, vaporization, and carbonization occurs instantaneously [15]. Lymph node management especially in inaccessible or areas close to major vessels has always been difficult to treat with conventional surgery. Many studies have used Laser for Lymph nodes in neck for thyroid carcinoma and Mesentric lymph Nodes. The easy application of sonography and appropriate laser makes it a worthwhile alternative for inoperable patients. The results have been encouraging from all quarters. Presence of Lymph Node places the patient in stage 3. Enlarged lymphnode or multiple lymph nodes places the patient in stage 4 [16]. The ability to laserise the enlarged lymph nodes adds to the survival period of patients [4, 6, 7, 14, 17].

Funding and Conflict of Interests

The authors declare that they have no funding and there is no conflicting interests.