Introduction: Breastfeeding is the benchmark for feeding infants during the first months of life, regardless of their birth weight. The objective of our study was to compare the weight growth of a cohort of low birth weight (LBW) newborns in the first 6 months of life according to the type of breastfeeding adopted by the mother.

Methodology: It was a prospectiveand analytical study of a cohort of newborns from LBW. It took place over a period of 17 months at the level of a reference structure in Dakar. We have included all newborns born “in-born” weighing less than 2500 g with a threshold of 1000 g. The data was analyzed with SPSS version 17 software.

Results: The average birth weight of newborns was 1821.8 g with extremes ranging from 1000 g to 2400 g and the median weight of 1840 g. The majority of our population had a birth weight ≥ 1500 g (83%) with more than half of them being premature (58.9%). Depending on the type of breastfeeding adopted by the mother, 33/112 newborns were on exclusive breastfeeding (EBF). During the first 6 months of life, the average weight gain was significantly better in infants on EBF (747.9 g) compared to infants on mixed breastfeeding (728.9 g) and artificial breastfeeding (676.6 g).

Conclusion: Better awareness of mothers should be made during hospitalization and during follow-up consultations for newborns of LBW to encourage the continuation of the EBF which remains the best food for this infant population.

Low birth weight (LBW) is defined as a birth weight less than 2500 g [1]. Its prevalence remains very high worldwide. In 2015, 20.5 million children were born with a LBW, or around one in 7 births worldwide. Almost 90% of these births take place in low- and middle-income countries, particularly in South Asia and sub-Saharan Africa [2]. In Senegal, its national prevalence is estimated at 12% of live births [3]. These figures are certainly underestimated and the prevalence of LBW poorly evaluated since in many developing countries, there are still a large number of home births which escape national statistics and even when these births are counted, the birth weight is not always known, thus generating considerable missing data [2, 4]. At the level of referral hospital structures, the prevalence of LBW seems even higher with rates sometimes approaching 30% [5]. LBW represents an increased risk of morbidity and neonatal mortality worldwide [6]. In addition to these immediate complications, there is the risk of developing metabolic and cardiovascular diseases in adulthood, as shown by the work of Barker [7]. The occurrence of these short- and long-term consequences depends very much on the quality of the infant's initial nutrition. Breastfeeding is the benchmark for infant feeding during the first months of life. It promotes the physical and emotional growth of the child, favors the mother-child bond and strengthens the immunity of the child. Breast milk contains all the nutrients that an infant needs during the first six months of life to ensure satisfactory growth and protect him from disease [8]. Therefore, all newborns and infants, including those with low or very low birth weight, should be fed their mother's milk [9]. Despite everything, for various reasons [10] (lack of information, lack of lactation, resumption of professional activity, hospitalization at birth, etc.), the rate of exclusive breastfeeding (EBF) remains low worldwide. In fact, only 43% of infants under the age of six months are fed exclusively with breast milk worldwide; this rate is 42% in Senegal [3].

The objective of our study was to compare the weight growth of a cohort of newborn infants in the first 6 months of life according to the type of breastfeeding adopted by the mother.

It was a prospective, observational, descriptive and analytical study of a cohort of low birth weight infants. It took place over a period of 17 months from October 2016 to March 2018 at the Center National Hospital of Pikine. This hospital represents a benchmark public health structure with a large influx of people from the Dakar suburbs. With a capacity of 12 beds including 4 incubators, the neonatology service receives an average of 1000 newborns per year. The populations admitted to it often have low incomes. We have included all newborns born “in-born” weighing less than 2500 g with a threshold of 1000g. Out-born LBW as well as those with severe birth defects were excluded from our study. The parameters studied were the age of the mother, profession, parity, maternal pathologies during pregnancy, monitoring of pregnancy and gestational age. In the newborn we studied gender, birth weight, type of low birth weight, type of breastfeeding adopted by the mother, monthly weight gain. Data were collected from hospital records and follow-up of low birth weight infants. The gestational age in weeks of amenorrhea (WA) was determined from the date of the last period recorded on the health book or from early ultrasound. Otherwise, the calculation of the BALLARD neuro-morphological score was used [11]. During the follow-up, the weight was collected with an electronic balance with a precision of 10 g.

Our study involved a cohort of 112 newborns of LBW out of a total of 3,399 live births at the hospital maternity, a prevalence of 3.33%. The majority of mothers were between the ages of 18 and 35. They had no professional activity (95%) and were poor in the majority of cases (32.1%). The sex ratio was 0.78. The average birth weight of newborns was 1821.8 g with extremes ranging from 1000 g to 2400 g and the median weight of 1840 g. The majority of our population had a birth weight ≥ 1500 g (83%) with more than half of them being premature (58.9%). Table 1 shows the characteristics of mothers and newborns at birth. Depending on the type of breastfeeding adopted by the mother, 33 newborns were on exclusive breastfeeding (EBF), 75 on mixed breastfeeding (MB) and 4 on artificial breastfeeding (AB) or 3.57% (Figure 1). During the first 6 months of life, the average weight gain was 747.9 g in infants on EBF, 728.9 g in infants on MB and 676.6 g in infants on AB (Figure 2). Regarding the growth of newborns, we noted a better growth of newborns on EBF with superimposable growth of the 3 curves during the first month than a nearly linear trend in the weight curve of infants under exclusive breastfeeding whereas the growth of infants on mixed and artificial breastfeeding was less regular (Figure 3).

Table 1: General characteristics of mothers and newborns at birth. 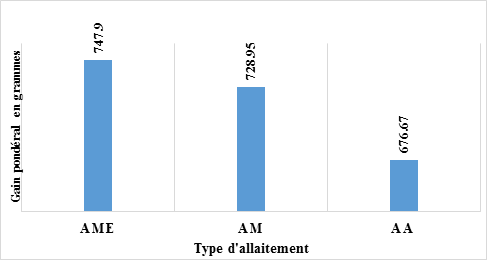 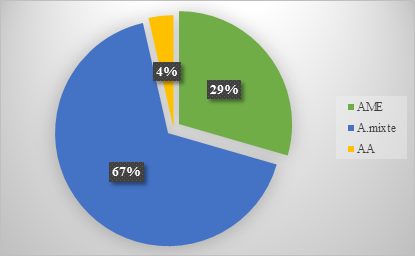 Figure 2: Distribution of LBW by type of breastfeeding. 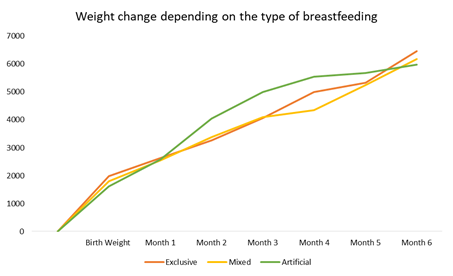 Figure 3: Evolution of the weight gain curve according to the type of breastfeeding.

LBW is one of the leading causes of morbidity and neonatal mortality in the world [12]. Its prevalence is low in our service compared to hospital data at the national and African level [5, 13]. The systematic transfer of our structure to other reference hospitals in the Dakar region of certain high-risk pregnancies, particularly very low birth weight (BW <1000 g) could explain this low prevalence. In our cohort, we noted a clear predominance of women. This result is reported by several authors [14, 15]. It could be linked to the higher rate of female births in the world. LBW is often associated with mild or moderate prematurity. Globally, 80% of premature births are moderate with a weight greater than 1500 g [2]. This very high proportion of light to moderate prematurity justifies the adoption, in low-income countries, of certain simple, effective and inexpensive strategies such as the Kangaroo method of care which, in addition to protection against hypothermia promotes the initiation and continuation of exclusive breastfeeding [16-18]. Breast milk regardless of birth weight is the benchmark for infant feeding during the first 6 months of life. It strengthens its immunity and promotes its physical growth [8]. The prevalence of LBW in Senegal from 2010 to 2017 increased from 39% to 42%, which proves that a lot of efforts have been made to raise awareness of EBF [3, 19]. In our work, only 29% of children have benefited from an EBF. It should be noted that there is sometimes a very long delay between birth and the time when feeds become effective in newborns of LBW. Also, the success of breastfeeding is sometimes more complicated in EBF infants, especially when they are hospitalized at birth, as is often the case in this population [20]. So in developed countries, faced with the need to feed these infants with human milk, the choice was made to set up milk banks. In our countries with limited resources, given the high cost of donor milk and the logistics necessary to manage such structures [21], the best alternative seems to be the development of mother-child kangaroo units which encourage the pursuit of breastfeeding throughout the child's hospital stay [16-18].

In our series, EBF was associated with better weight gain compared to MB and AB with growth that is more stable and more regular. These results confirm the results reported by Li Yong-Wei [22] on the benefits of breastfeeding compared to artificial breastfeeding on weight growth of premature infants in neonatal intensive care unit. Indeed, although the amount of protein in breast milk is much lower compared to cow's milk, the proteins in breast milk benefit from better bioavailability with optimal absorption thus allowing better growth of the child [8]. In addition to these weight-gaining benefits, in hospitalized LBW newborns, there is a significant reduction in the risk of ulcerative enterocolitis, a shortening of the time for complete enteral feeding and the length of stay, a reduction in the burden of staff work and the cost of hospitalization [23]. However, this better growth of children under breast milk is not found by some authors. Indeed, Quigley et al. [24], in a meta-analysis, which compared infant formula with mother or donor milk, found better growth in weight, size and head circumference of children under formula. The digestive tolerance of infant formula was also lower with a significant increase in the risk of developing ulcerative necrotizing enterocolitis. The poor growth of infants on exclusive AB could be explained by the difficulty of implementing this food method and its cost. It should be noted that in our context AB is rarely chosen by mothers.

Exclusive breastfeeding remains the best LBW infant food in our context. Thus, a better awareness of mothers should be made during hospitalization and during follow-up consultations for newborns of LBW to encourage the continuation of EBF which remains weak in our country.