This paper proposes developing a wireless sensor for heartbeat and respiration rate monitoring for the sportsman. The developed wireless sensor, includes an accelerometer sensor, a processor and a transceiver which operates in Industrial, Scientific and Medical (ISM) band and the frequency of 2.54 to connect with a central node for transmitting the measured data. In order to evaluate the accuracy of the presented sensor, the different experiments are carried out on several volunteers and the resultant data are compared to a gold standard for respiration rate and also heartbeat as a reference. As the outcomes illustrate, the root means square error (RMSE) and the standard deviation of the error (SD) are calculated less than 2.8 and 1.43 beats per minutes as well as 1.01 and 0.85 breaths per minutes for the heartbeat and respiration rate, respectively. Therefore, the sensor can account a good alternative for cardiorespiratory system monitoring for sporty application, due to low-cost, portable and also availability.

Currently, there are many elderly people, who suffer from poor health. According to this, the long-term attention to them is considered a very important issue for their health. In other words, identifying and tracking daily physical activity is a key factor in assessing the health and quality of life. Thus, continuous monitoring of the health status of patients can prevent injuries and also ensure their social life. For example, cardiovascular signals are important indicators for evaluating the health of patients due to the rapid growth of cardiovascular deaths [1]. Recently, a large number of cardiovascular monitoring systems have emerged in medical centers in recent decades to reduce these deaths [2]. Continuous cardiovascular monitoring techniques can be divided into three measurement methods: devices that measure movement and tissue changes, devices that measure the flow of air, and devices that measure

changes in the blood. One of the biggest problems patients suffer is the wasting time and cost to visit the clinics, especially in remote areas [3]. Additionally, the patients experience the drawbacks when visiting these places. Recently, telemedicine has emerged benefiting advances in communications technology and telecommunication in order to offer the patients a variety of home-based systems at home using wearable sensors [4-7].

Figure 1: A variety of cardiorespiratory system monitoring and our method.

The wearable sensors can record the patients vital signs in smart homes and then transmit the information to medical centers and clinics through the Internet [8]. There are ample wearable commercial systems that are commonly used for cardiovascular systems monitoring, including electrocardiogram (ECG) [8], phonocardiogram (PCG) [9] and seismocardiogram (SCG) [11] (Figure 1). An ECG device measure and record the electrical activity in the heart. When a heartbeat is made, the heart emits a series of electrical discharge spikes that can be recorded using electrodes on the surface of the body. An ECG tracing is affected by patient motion. Another problem for the device is a stress on the patient [10]. In another system, namely PCG, are based on recording and detecting heart sounds, which are made by the various cardiac structures pulsing and moving blood and also are caused by the acceleration and deceleration of blood and turbulence developed during rapid blood flow. However, the PCG is produced from the bloodstream and cannot cover frequencies below 25 Hz [12-13]. Today, the seismocardiogram (SCG) emerge to alleviate the disadvantages associated with ECG and PCG systems [14]. The chest makes variations during the heart and respiration activities that the vibration can be recorded by placing a microelectromechanical (MEMS) accelerometer on the sternum while the patient lies supine [15-16]. The MEMS accelerometer sensor can accurately measure the acceleration of three-axis length, width, and height [17]. Indeed, the SCG systems can be employed to measure the produced accelerations of the chest wall by a myocardial movement [14]. Recently, the SCG system is recommended for health-care instead ECG and PCG due to be comfortable, non-bulky and non-intrusive.

In this paper, a system for vital signs of cardiorespiratory system monitoring based on accelerometer sensors is presented. The system includes a microcontroller, a motion sensor, and a transreceiver. The developed sensor records heart and lung movements that will obtain heartbeat and respiration rate after using high and low pass filter, respectively. Compared to other SCG systems [18-19], this system can estimate the heart rate with more accuracy. So that the mean square error for heart rate is 2.8 beats per minute and for breathing 1.01 breaths per minute. In addition, it has a smaller hardware system and lower weight than [18-19].

As Figure 2 shows, cardiovascular systems result in the small movements in the chest. The movements can be converted into two movements: short and long-term, which are supposed as a heart rate and respiration, respectively. Accordingly, the movements can be extracted from the chest using equation 1. 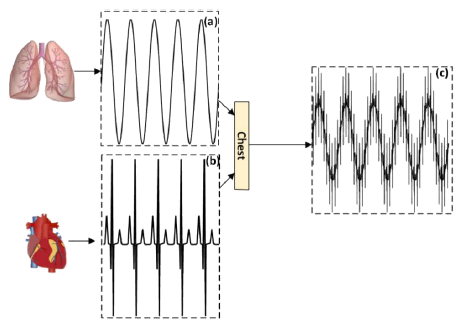 Figure 2: The proposed mechanism, (a) respiration rate; (b) heartbeat and (c) total lung and heart activities.

Where DL is associated with lung activities or with low frequency movements (Figure 2a). While DH is movements with higher frequencies for cardiac activity (Figure 2b). Also, DT is the sum of the two previous movements that are obtained from the chest (Figure 2c). In order to obtain this DT, a motion sensor can measure both short and long-term movements of the chest and abdomen. For this purpose, an accelerometer is used.

The developed system for heart rate and respiration rate estimation includes a wireless motion sensor, a central node and a personal computer for displaying data (Figure 3). The wireless motion sensor, including an accelerometer sensor, a microcontroller (AVR-Atmega 32), and a transreceiver operating ISM band and at a frequency of 2.54 GHz (Figure 4a). The microcontroller is communicated with the accelerometer sensor through the I2C protocol for taking the updated data. Then, the data are sent to transreceiver through SPI protocol. The transreceiver wirelessly transmits the data to the central node. It should be noted that the sensor node is designed and is mounted on a small PCB and its voltage supply with a 3.7-volt lithium polymer battery.

port (UART protocol). The obtained data are recorded and saved in the Personal Computer (PC) for further processing. The central node's components are mounted on another PCB and its voltage are supplied through USB voltage. In fact, the central node is the main controller for connecting to the computer which is used to store data at a sample rate of 50 Hz. One of the important features of the developed system is more reliable for transmitting data wirelessly. Other feature of the transreceiver consists of low cost, and high send and receive rates. The transreceiver has a power consumption of 0 dB and the rate of information transmitter 1.8 Mbps.

Figure 3: The measurement setup for estimation of heartbeat and respiration rate. 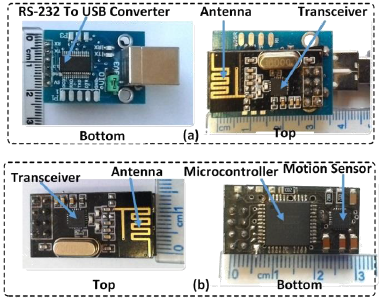 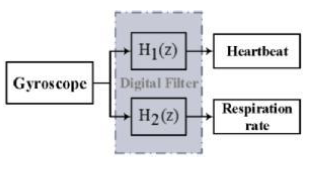 Figure 5: Digital signal processing for separation of the heartbeat and respiration rate.

And the low-pass filter is as follows:

As previously mentioned, using a patient-monitoring system at home can be very effective due to the death rate associated with cardiovascular systems is severely rising. Although there are many systems in the market for this purpose, a system can be used at home that has been features such as high accuracy and low cost as well as portability. 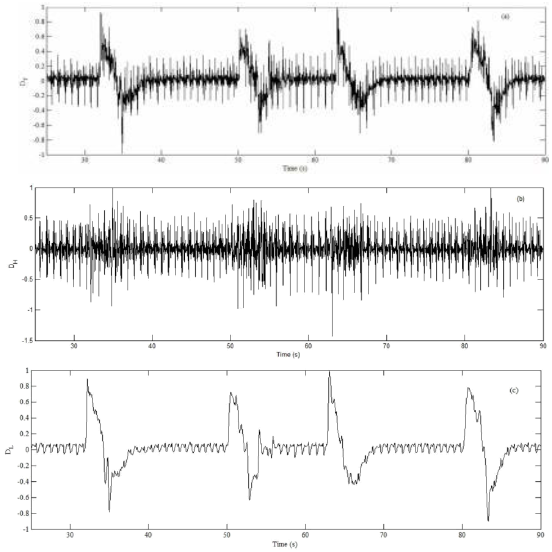 Figure 6: The obtained result of the holding breath test for (a) raw signal; (b) the heartbeat and (c) the respiration rate.

In order to investigate the accuracy of the presented system, an ECG device, similar to [20], is mounted on the patient's chest along the developed sensor for comparison of the heart rate of the presented sensor with a reference (gold standard). This ECG device is a single-mode ECG that measures the typical ECG data and can transfer those data through a USB port to the computer to evaluate the data. Also, a belt around the abdomen, like in [21], is used for evaluating the precision of the respiration rate in the proposed system.

In the first test, the volunteer is asked to hold his breath in a lying condition and take a deep breath after a few seconds. The volunteer repeatedly performed this test within 3 minutes. These results averagely indicate the respiratory rate is 5 per minute and the heart rate is 68 per minute for this period while the gold standards show respiration and heartbeat 5 breaths per minute and 69 beats per minute, respectively. The snapshot of the results have been selected and shown in Figure 6a, 6b, and 6c for raw data, after using the high pass filter and low pass filter, respectively. In another test, while the volunteer lies his face upward (supine), the developed sensor averagely measured his heart rate 76 breaths per minute and respiration rate 29 breaths per minute for 3 minutes. The gold standard also indicates that the mean values 30 and 74, respectively, for respiration rate and heartbeat. The results of this test, which are related to the raw data of the developed sensor and passing through the high pass and low pass filter, are shown in Figure 7a, 7b, and 7c in turn.

Also, the Bland-Altman plot for heart rate are derived from two mentioned tests with 90 pairs measurements of the developed system and the reference system in [20] and are shown in Figure 8 (II). In this case, the average error is 0.24 beats per minute with a 95\% compatibility range between -2.23 and 2.71 beats per minute. With the help of this Bland-Altman plot, other valuable information can be obtained. For example, the mean squared error and standard deviation for respiration rate are 1.43 and 0.85 breaths per minute, respectively, as well as for heart rate 2.8 and 1.01, separately. Accordingly, very good compatibility between the proposed system and the ECG reference system [19] as well as the abdominal belt for the reference system in [21] of respiration is obtained. Finally, the results of this sensor reveal that the developed sensor is an ideal candidate for monitoring heart rate and respiration. Also, it can be a good alternative to the other works because of good accuracy, portability, and affordability. 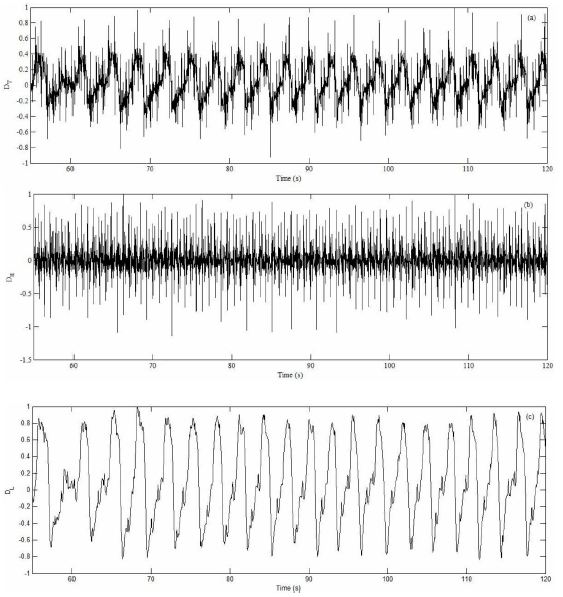 Figure 7: The obtained result of the supine test for (a) raw signal; (b) the heartbeat and (c) the respiration rate.

Figure 8: The Bland-Altman plot for (I) respiration and (II) heartbeat. The plot is based on the obtained data of the developed sensor and a gold standard.

In this paper, developing a motion sensor based on SCG for measuring heart rate and respiration was described. This sensor was made with the help of a very small and low weight PCB. To investigate the accuracy of the sensor, two tests were performed and the heartbeat and respiration rate values obtained from these tests and then, were compared with a commercial ECG device as well as a commercial respiratory diagnostic device for reference. The results showed that the proposed sensor measures heartbeat and respiration rate with mean square errors of 2.8 and 1.01 beat per minute, respectively, while the standard deviations are 1.43 and 0.85, separately. As a consequent, this sensor can be an appropriate alternative to monitor the vital signs of the cardiorespiratory system for a long time.