Hamstring injuries are the most common muscle strain injury in footballers and other sports where quick accelerations are required [1, 2]. The most common location affected is the long head of biceps femoris myotendinous junction however, the presence of central tendon injury is more clinically significant as it is associated with a prolonged rehabilitation interval [3-5]. Whilst there is no clear consensus on indications for surgery following acute hamstring injury, it has been proposed that operative management should be considered in displaced bony avulsions, proximal tendinous avulsions involving all 3 tendons, proximal 2-tendon avulsions with retraction of > 2cm or persisting pain [2, 6, 7]. These injuries are now increasingly being treated surgically [8, 9].

The results from surgical management of hamstring injuries appear promising, especially when the repair is performed acutely [6, 9, 10]. One of the complications following surgical repair includes sciatic nerve injury, although the true incidence of this complication is unknown and the etiology uncertain [10, 11]. We describe a case of sciatic neural tethering post mid-hamstring tendon repair, and propose percutaneous neurolysis as a viable therapeutic intervention. 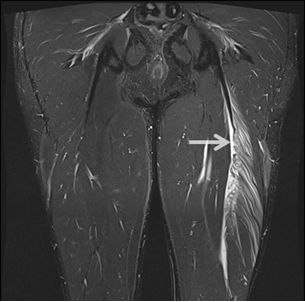 He recovered well post operatively and completed rehabilitation successfully with a return to play time of 68 days. However, he sustained a further grade 2C4 injury to the more distal left biceps femoris musculotendinous junction and central tendon which required a further 5-week rehabilitation period.

Post re-injury, the patient continued to experience ongoing mid-belly and distal hamstring pain, affecting strength and function. His clinical picture was confounded by his known background of bilateral hamstring syndrome, which had previously responded well to percutaneous neurolysis at the ischial tunnel. However, posterior thigh pain and symptoms of sciatica persisted following neurolysis at the hamstring origin. Subsequent ultrasound of the left mid hamstring muscle belly in the region of surgery showed a band of echogenic perineural fibrosis tethering the nerve to the biceps femoris muscle at the repair site that was visible on previous MRI (Figures 2 and 3a). 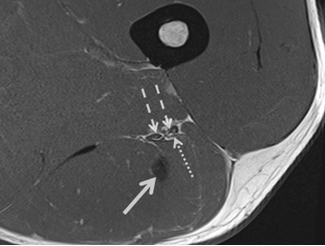 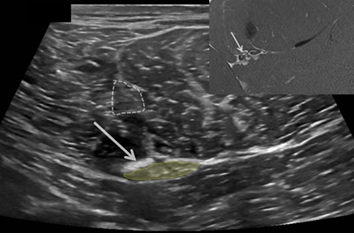 Percutaneous neurolysis was performed at both the hamstring origin and tendon repair site with 80cc of normal saline and 40mg of triamcinolone acetonide (Figure 3b), and he was able to return to play in 6 days. The patient experienced mild recurrence of mid-thigh symptoms 6 weeks after the previous procedure, and percutaneous neurolysis of the sciatic nerve from the focal area of scarring at the previous site of hamstring tendon repair was performed with 20cc of saline and 5.7mg Betamethasone acetate. Again, he was able to resume playing competitively 5 days after this procedure. The patient underwent further neurolysis of the sciatic nerve again 7 weeks later with 20cc of saline and 2mg dexamethasone, and again a dense posterior band adhesion at the site of previous surgery was hydrodissected from the nerve. The patient had an excellent response to this procedure, with final resolution of symptoms at 6 months post-injury. He has no recurrence of hamstring symptoms at the 2-year mark. 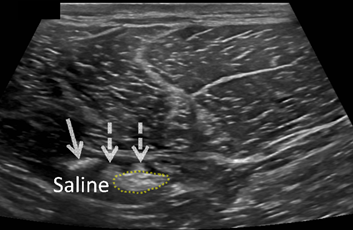 Figure 3b: Transverse ultrasound of the left proximal to mid hamstring muscle at the site of surgical repair during percutaneous neurolysis. Note displacement of the band adhesion (arrow) from the sciatic nerve (yellow dotted line) with some less echogenic peri-sciatic adhesions also evident. There is anechoic or black fluid within the peri-sciatic space post hydro-dissection.

Due to the prolonged rehabilitation interval associated with biceps femoris central tendon injury and high rates of recurrence, there is a shift in the management protocol of elite athletes to early surgical repair of these tendon injuries [5, 12]. Although literature on surgical intervention remains limited, it has been suggested that non-operative management of proximal hamstring avulsions are associated with ongoing chronic pain, weakness, decreased endurance, reduction in function and difficulty with running [13]. There is even less data for management of mid-tendon injuries however, assuming that there is clinical overlap between proximal and mid-tendon injury these complications of conservative management are unacceptable in the elite sports setting. Therefore, complete biceps femoris central tendon rupture generally mandates surgical repair in many elite athletes and consequently we can expect an increase in the incidence of hamstring surgeries.

Given the proximity of the sciatic nerve to the biceps femoris muscle, the sciatic nerve is at risk both at time of hamstring injury as well as during surgery. There have been various reports of distal sciatic nerve symptoms that develop both acutely and chronically following hamstring avulsion [14, 15], but the incidence of sciatic nerve involvement remains unclear. Literature regarding sciatic nerve injury following hamstring surgery remains exiguous, but it has been suggested that the true incidence of sciatic nerve involvement is likely to be high [11]. In a recent study by Subbu et al., on 112 operative cases, the incidence of local sciatic nerve symptoms was 11%, with 1 patient requiring revision surgery for exploration and neurolysis [10]. Wilson et al proposed the risk of developing new sciatic nerve-related deficit to be 7.5%, with nerve related pain being the most common at 4.5%, and motor weakness (3.0%) and sensory loss (1.5%) being less so [11]. Entrapment of nerve by scar formation following surgery has been theorized as a possible etiology for the postoperative symptoms, although it has never been confirmed [11]. A similar case of nerve entrapment by scar tissue has been published previously, albeit in the setting of repetitive injury rather than surgery, and open surgical release was required for resolution of symptoms [15].

Other causes of sciatic nerve injuries apart from hamstring conditions have been reported in literature, with common entrapments within the deep gluteal space including fibrous bands, piriformis syndrome, ischiofemoral pathology and gluteal disorders [16]. Apart from surgical neurolysis of the sciatic nerve endoscopically [17] or through open surgery [18], image guided injection with corticosteroid has also been proposed as a useful intervention [19, 20], although most articles describe injection to the muscle, with limited studies describing a targeted perineural approach [21, 22] . A recent study by Burke et al, described 38 cases of ultrasound guided perisciatic hydrodissection, and they reported immediate relief of symptoms in 84% of the cases, with 47% of cases reporting sustained relief up to follow up of 33.6days [21]. Ultrasound guided percutaneous hydrodissection has also been described for neurolysis of the lateral femoral cutaneous nerve [23], saphenous nerve [24], and carpal tunnel syndrome [25] to good effect with minimal complications. In a randomized, double-blind control trial on hydrodissection for carpal tunnel syndrome, the authors found improvement in symptoms, and they suggest a cumulative effect of hydrodissection with repeated injections, and possible advantages for postoperative adhesions [25]. For the elite sporting population, percutaneous neurolysis is an appealing choice for intervention, given its effectiveness, low risk profile, and short return to play time, as compared to traditional surgery, which requires a longer recovery period for wound healing and post-operative rehabilitation.

Clinicians should have a high suspicion of sciatic nerve tethering due to perineural band adhesions in patients presenting with persisting local and referred pain following hamstring tendon repair. Percutaneous neurolysis can be a useful first-line therapeutic intervention which allows for rapid return to play at the usual level.