Discal calcifications can be an etiology of back pain in adults. It is a clinical entity well described in children but rarely reported in adults. Therefore, current knowledge of this entity is based on the pediatric population and rare literature exists regarding the natural history and management of this condition in adults. It is generally self limited and only requires symptomatic treatment. Imaging plays an important role in the diagnosis of this entity helping the patient avoid further invasive investigational and therapeutic procedures. We report two new cases of symptomatic disc calcification, occurring in the thoracic spine of a 61 year-old-patient and in the lumbar spine of a 79-year-old-patient. In both cases, the final diagnosis was based on radiological findings and certified by clinical evolution of the symptoms.

Symptomatic disc calcification is an entity rarely described in adults with very few reported cases in medical literature. It is usually a self limiting disease requiring only conservative treatment and physical rest. Thus, it should be well diagnosed in order to avoid unnecessary interventions. Radiologists are at the center of the decision making for the diagnosis and management of this entity. We hereby report two new cases of symptomatic disc calcification diagnosed on Xray, CT-scanner and MRI with clinical findings and evolution in favor of this diagnosis.

A 61 year-old diabetic female patient complained of low thoracic back pain, of recent onset, exacerbated by movement. There were no associated neurologic symptoms, history of trauma or preceding infection and past medical history was unremarkable. On physical examination, we found tenderness on palpation of the spinous processes at the lower dorsal spine whereas neurologic examination was normal. Blood tests were normal with a C- reactive protein level of less than 3.08. Dorsal spine radiographs showed severe narrowing of the discal space at T11-T12 level with significant destruction of the adjacent vertebral endplates, suggesting acute spondylodiscitis (Figure 1). A past chest X-ray done few years ago showed a dense disc calcification at T11-T12 level without endplates destruction. 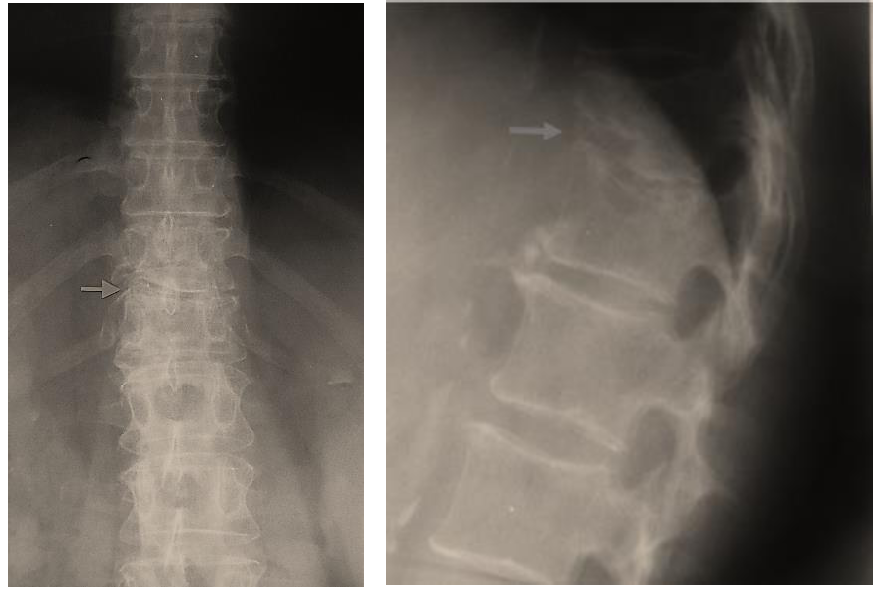 Figure 1: Case 1- Lateral and frontal dorso-lumbar spine radiographs showing severe narrowing of the discal space at the level of T11-T12 with significant destruction of the adjacent vertebral endplates (arrow). 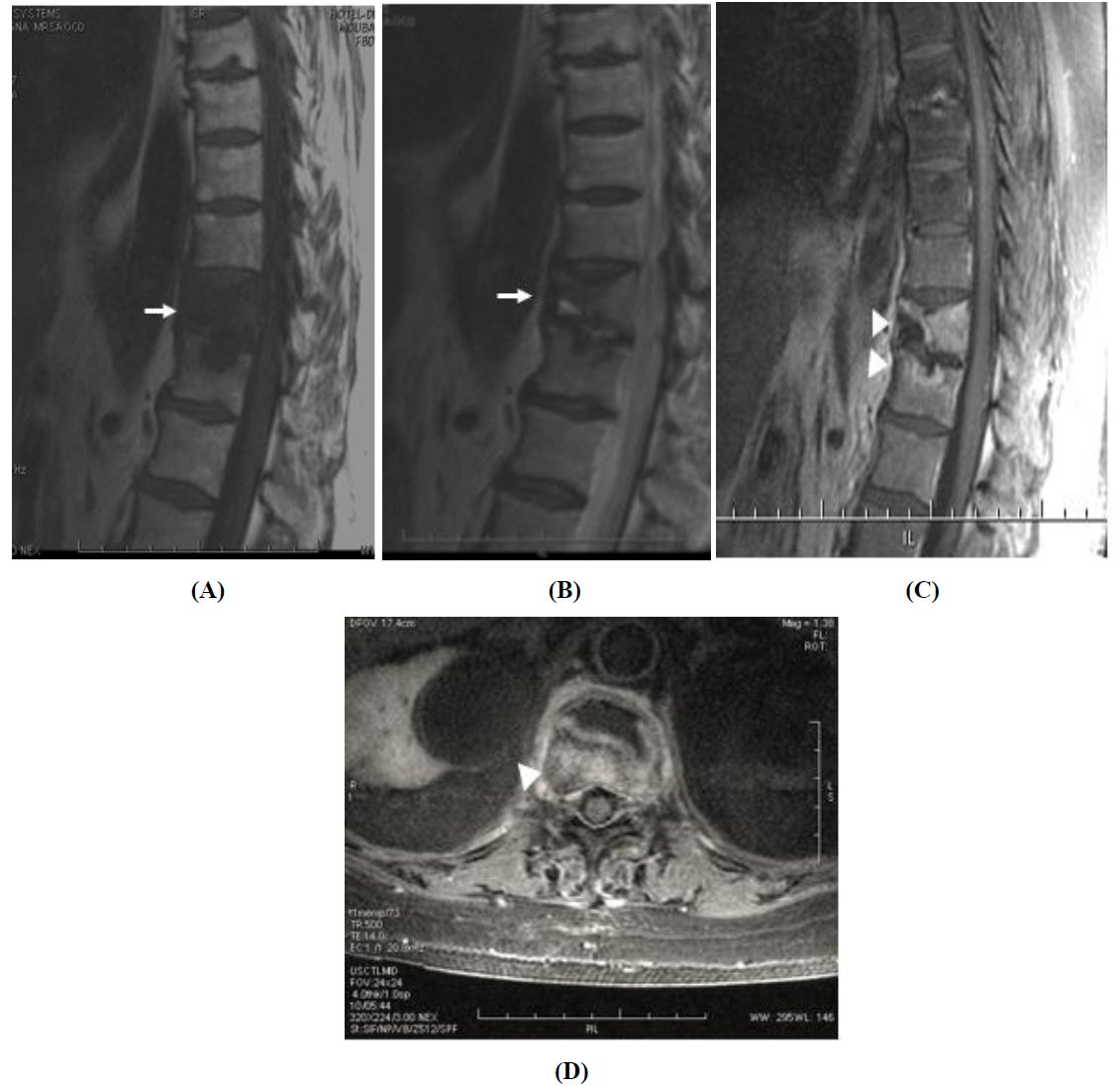 CT scan confirmed the presence of erosions and destruction of the vertebral endplates, and showed small calcifications within the discal space, most probably residual from the large discal calcification described on prior Xrays (figure 3). We also described a disc vacuum phenomena. 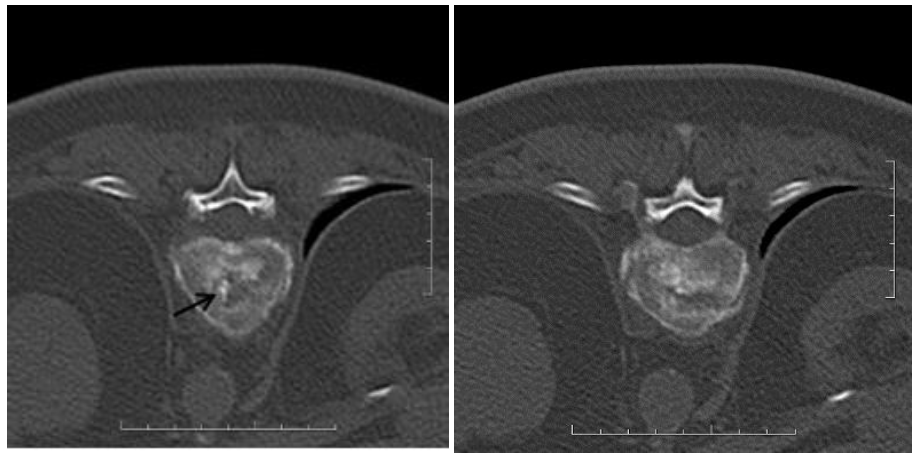 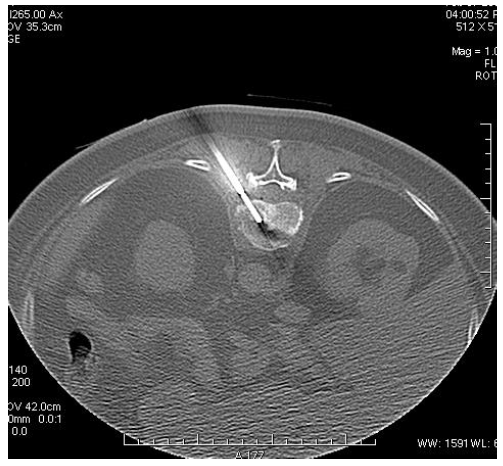 The diagnosis of acute calcific discitis was therefore retained. The patient was released under pain-killers. She improved completely after two months. Follow-up MRI 1-year later, showed complete resolution of inflammation with sequellar disco-vertebral changes at the T11-T12 level (Figure 5). 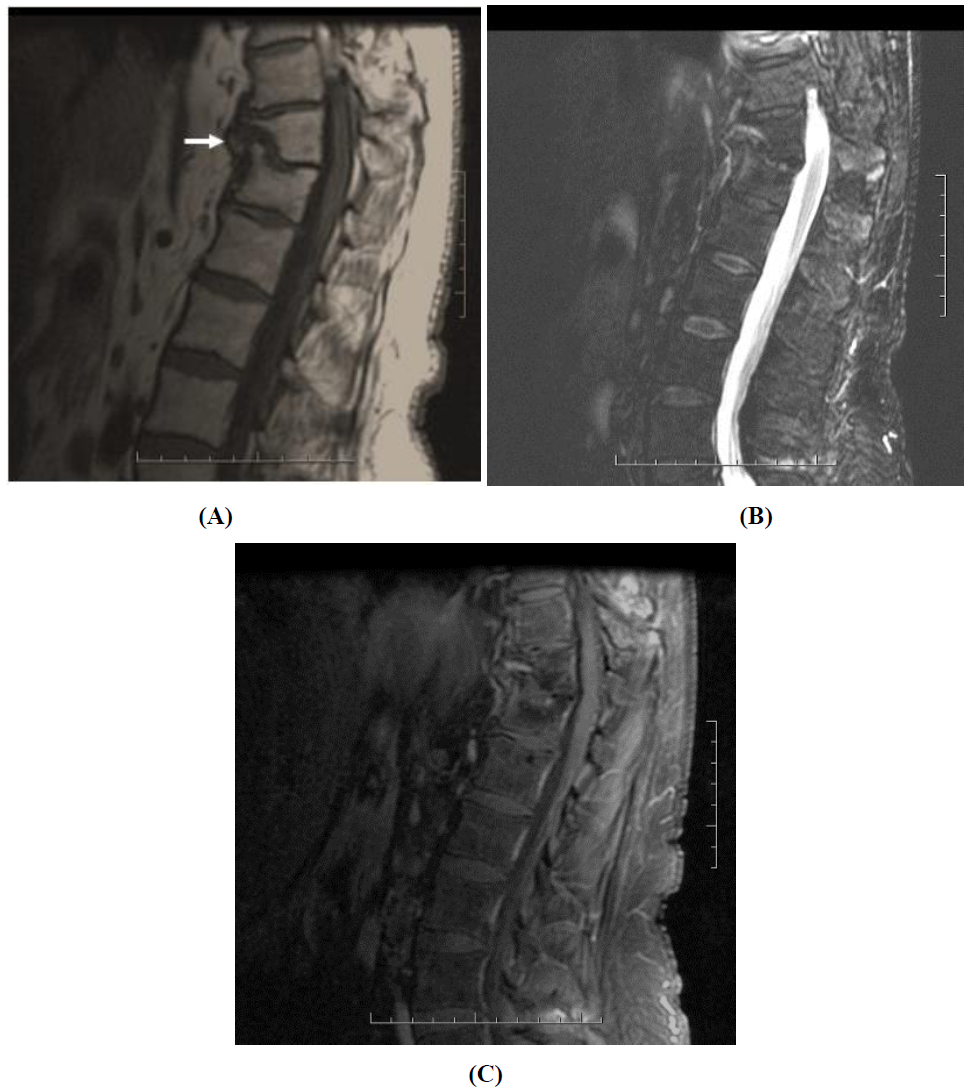 A 79-year-old male patient known to have dyslipidemia, hypertension and severe arterial disease admitted to the hospital for a disabling right lower limb pain. Lower limb arteriography showed a significant stenosis of the right iliac artery and a stent was therefore deployed (Figure 6). 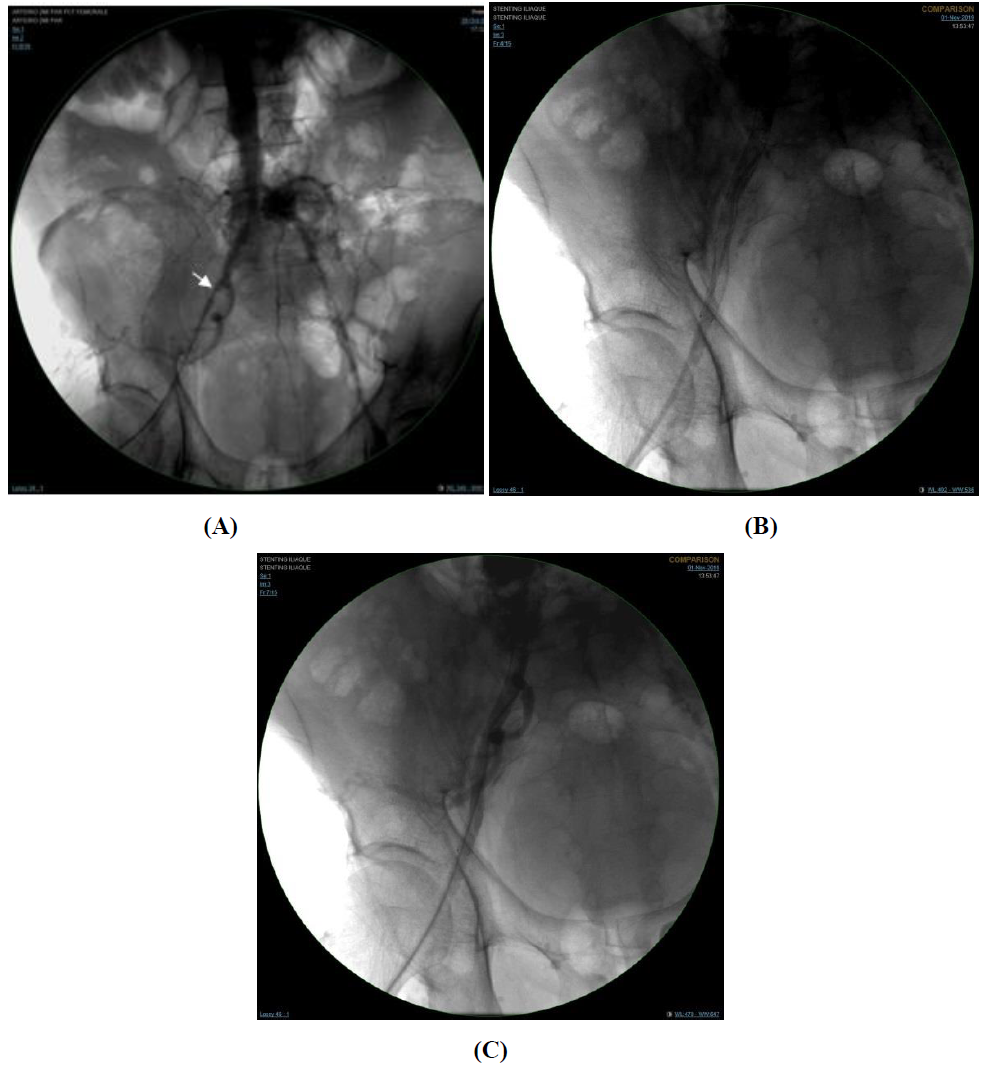 However, the patient’s symptoms didn’t resolve. A lumbar x-ray was performed in order to rule out a disco-vertebral pathology. It revealed the presence of an old shrapnel located at L4-L5 discal space with adjacent diffuse discal calcifications protruding into the lumbar canal (Figure 7). 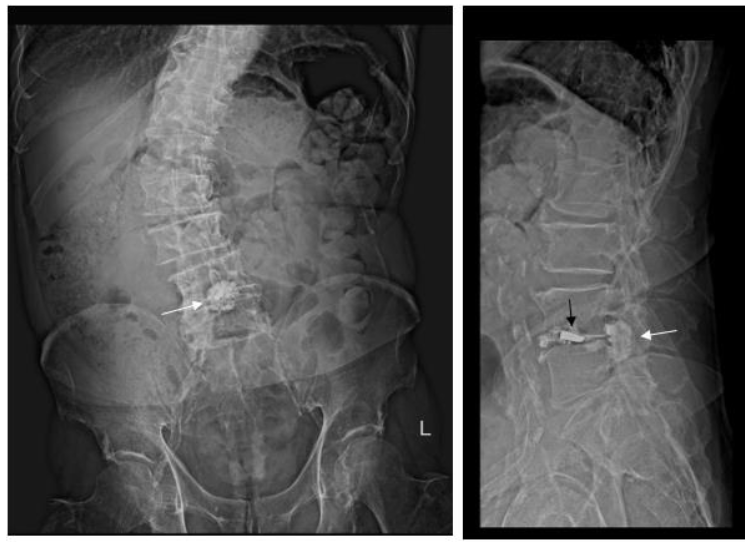 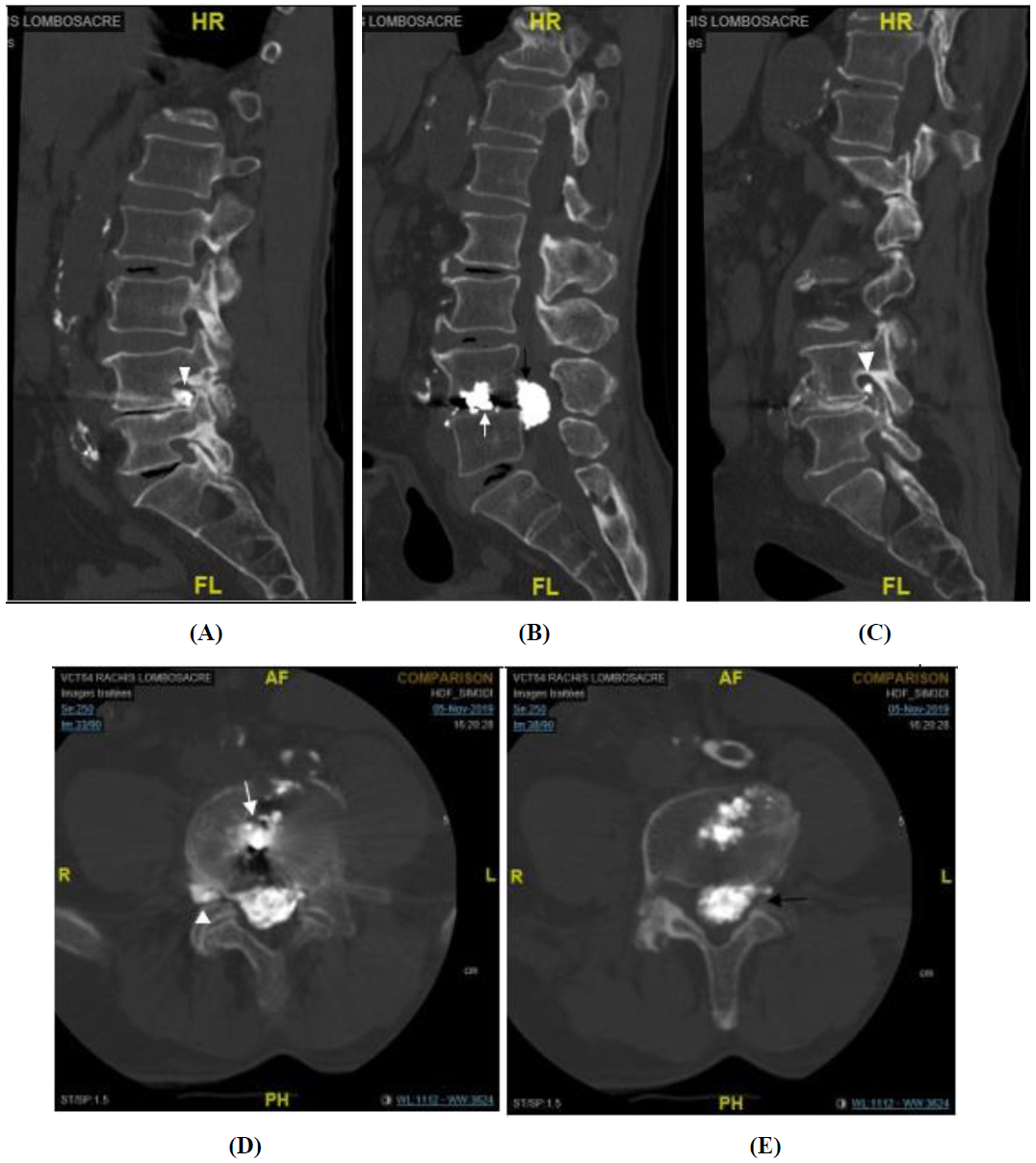 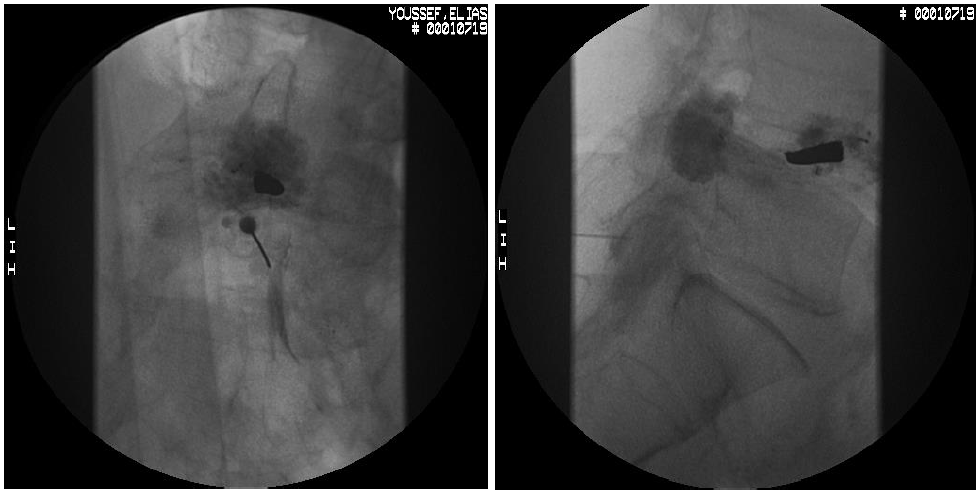 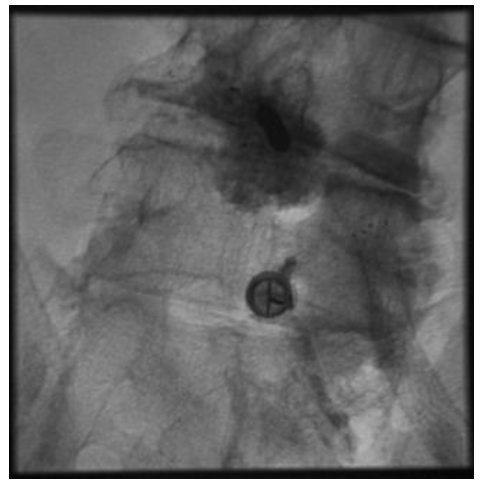 We report here two new cases of symptomatic discal calcifications in two adult patients. Symptomatic discal calcifications have been reported in pediatric population but is a rare entity in adults (12 cases) [1, 2]. It was first described in 1994 by Baron in a 12-year-old boy and it typically occurs in children between 5 and 10 years-old [1, 3-5].

In children, discal calcifications are almost always idiopathic. It is especially located in the cervical and upper thoracic spine, almost exclusively central in the nucleus pulposus [3]. Reported cases of acute calcific discitis in children manifested as intense pain of lower cervical spine, stiffness, torticoli, fever, with a reported case of posterior discal herniation with medullar compression and another case of anterior herniation leading to dysphagia [3].

In adults, discal calcifications are incidentally found in 5% of chest radiographs, 6% of abdominal radiographs and 70% of post- mortem examinations [1]. Their prevalence increases with age and discal space thinning and it is more frequent in men than women [6]. It is more frequently located in the lower thoracic and lumbar spine, 10 times more frequent in the annulus fibrosus than the nucleus pulposus [3]. These are sometimes idiopathic but may also be associated with systemic diseases such as alkaptonuria, hemochromatosis, chondrocalcinosis, ochronosis, hyperparathyroïdism, acromegaly, amyloïdosis and conditions resulting in immobilisation or fusion of the spine such as poliomyelitis, ankylosing spondylitis, juvenile chronic arthritis and vertebral fusion from surgery or local trauma [1, 2, 6-9]. In those cases, discal calcifications will involve multiple levels and will not be limited to the central nucleus pulposus [1, 7].

In adults, discal calcifications are most often asymptomatic. Very few cases of symptomatic discal calcifications were reported in the littérature (9 cases) [1], with thoracic spine being most frequently involved, followed by cervical spine [10]. The most frequent symptom in adults is minor back pain. However, there were some cases of spinal cord injury with myelopathy secondary to compression of dorsal medulla [2, 5]. Acute calcific discitis is often accompanied by a mild inflammatory syndrome with fever, leukocytosis, increased ESR and C-reactive protein level. Spine Xrays will show a dense round, oval or fragmented central calcification of the affected intervertebral disc. On MRI, the disc appears typically swollen, with a high signal T2 and a possible discal herniation. When the calcified disc herniates into the adjacent vertebral body, it causes an inflammatory response of the vertebral body and soft tissues which enhance with contrast, mimicking an infectious spondylodiscitis.

Calcification signal on MRI can vary depending on its composition, being most frequently low on standard spin-echo T1- and T2-weighted sequences. A susceptibility-weighted sequence may be useful in distinguishing between disc calcification and the normal low signal intensity of the end-plate [1]. The CT will show calcifications of the disc with sclerosis of the adjacent end plates suggesting an osteoblastic reaction in the marrow [1]. There is typically no end-plate destruction in calcific discitis, whereas it is a major feature of bacterial spondylodiscitis. However in our first patient, resorption of the calcification was associated with intense inflammatory reaction leading to an important destruction of the adjacent vertebral endplates. Comparison between old and new radiographs and identification on the CT of residual calcifications and vacuum phenomena in the disc space showed the diagnosis of calcific discitis over infectious spondylodiscitis and was confirmed by biopsy results.

In fact, radiologists should not mistaken benign calcific discitis for more sinister pathology such as infectious discitis in order not to proceed to further unnecessary imaging or invasive procedures. Prognosis of calcific discitis is generally very good with complete resorption of the calcification within few months in 90% of cases [12] and resolution of symptoms with only symptomatic treatment and activity restriction. For cases of spinal cord compression with neurological impairment, or in cases where conservative treatment fails, we proceed to surgical decompression [5].

Symptomatic disc calcification is a rare entity manifesting most frequently with back pain, with few cases of neurologic compression. This entity affects very rarely the adults and is more frequent in children. It may clinically and radiographically mimic infectious spondylodiscitis but the evolution of the symptoms and the presence of residual calcifications in the intervertebral space will help us distinguish between those two entities. Acute calcific discitis has a good prognosis with resolution of symptoms under conservative symptomatic treatment. Few cases of neurologic compression will need surgical treatment.

The authors received no specific funding for this work.

All authors declare that they have no conflict of interest.

This case contains a vertebral biopsy performed after documented oral and written consent of the patient.

Authors’ Contribution to the Manuscript