The Multiple Molecular Signatures in Gallbladder Carcinoma: from Basic Studies to Clinical Application

Gallbladder carcinoma (GBC) is a malignant tumor in gastrointestinal system. In this review, we mainly focus on three molecular levels to illuminate the potential molecular mechanisms in gallbladder carcinoma. First, we review genes with mutation and methylation associated with occurrence and development of GBC. Second, we review non-coding RNA and key differential genes at the transcript level, especially for their interactions. Third, we review crucial proteins in GBC. Moreover, we also discuss the challenges of these molecular signatures in clinical applications. Finally, we discuss potential application of these crucial genes in prevention, diagnosis and treatment of GBC.

Gallbladder carcinoma (GBC) is the most common biliary tract malignancy and has a poor prognosis, frequently presenting at an advanced stage. Prevalence rates of up to 7.5 per 100,000 for men and 23 per 100,000 for women have been reported from Andean-area populations, North-American Indians, Mexican Americans and inhabitants of Northern India [1]. Fewer than 10% of GBC patients survive more than 5 years after treatment [2]. GBC is hard to detect in the early stage, and most patients cannot be cured by surgery after detection because of the invasion of cancerous cells. For dozens of years of clinical practice, surgery was the only effective way to treat GBC. However, surgery usually cannot cure patients because the pathogeny of GBC has not been completely disclosed and the invasive cancerous cells cannot be eliminated surgically. Therefore, novel methods may be important ways to cure GBC, such as targeted therapy, which has broad application [3].

In this review, we focus on the detection and treatment signatures of GBC with the goal of illustrating the crosstalk among DNA, RNA and protein levels (Figure 1), and we expect that this review will provide useful information for the clinical diagnosis and treatment of GBC. 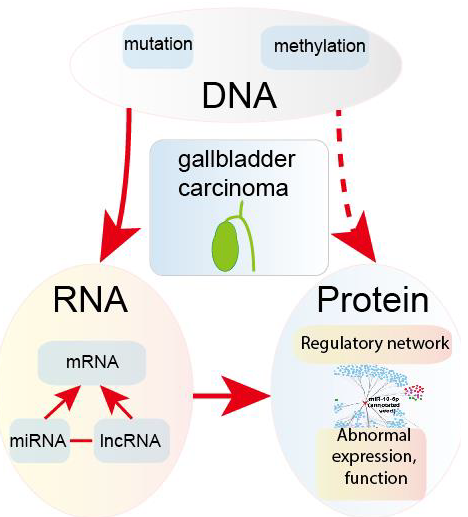 Here, the molecular signatures at DNA level mainly include mutation and methylation. The mutation of coding genes provides great advantages in the diagnosis and guidance of treatment. Research in Chile showed that allele-specific mutations could affect the incidence of GBC [4]. Inherited rare germline mutations had been proved to be related to GBC [5] and epidermal growth factor receptor mutations may have advantages for the treatment of gallbladder cancer [6]. Furthermore, some key genes, like P53, K-ras, Keap1, PIK3CA, EGFR, P16 and B-raf, have been explored. For example, P53 mutation in exons 5-8 were found in GBC patients and K-ras in codon 12 was important in the early stage [7, 8]. Mutation of Keap1 was found in C249Y and S338L led to the loss of Nrf2 repression activity [9]. Moreover, PIK3CA mutation in exons 9 was found specifically and may be effective in targeted therapies [10]. EGFR mutation in exons 19-21 could sustain survival and proliferation of GBC cells [11] and high percentage of B-raf mutations in exon 15 was found [12]. Therefore, gene mutation in GBC is meaningful for the understanding and treatment of GBC (Table 1).

The methylation of DNA also greatly contributes to diagnosis and therapy. A recent study showed that the patterns of gene promoter methylation allowed them to be considered biomarkers for the early detection, diagnosis, prognosis and therapeutic selection [13]. Furthermore, gene-specific DNA methylation (such as APC, CDKN2A, ESR1, PGP9.5 and SSBP2) had the same function [14]. Another study in north-central India proved D4Z4 and DNF92 subtelomeric sequences to be hypermethylated and hypomethylated, respectively [15]. Aberrant hypermethylation of promoter regions was an early, progressive and cumulative event in GBC [16]. One study on the methylation profile of GBC showed that the methylation profile was different from that in a healthy individual, which proved that methylation was an early event [17]. MYC hypomethylation was only detected in tumoral samples and was associated with its protein expression (p=0.029) and MYC mutations were detected in 80% of GBC samples [18].

Table 1: The study of some key mutation genes in GBC.

3. Crucial mRNAs and ncRNAs in GBC

The most effective way to cure GBC is to diagnose the cancer in the early stage, but the disappointing reality is that GBC remains difficult to diagnose preoperatively. Furthermore, extension of the disease beyond the mucosa predicts a poor chance of long-term survival [19]. Increasing studies have shown that miRNAs, mRNAs and long non-coding RNAs are very effective in the diagnosis of GBC. mRNAs in GBC greatly affect physiological and pathophysiological conditions. Among these, human telomerase reverse transcriptase (hTERT) mRNA, a catalytic subunit of telomerase, had been determined to be effective for diagnosing the nature of the polypoid lesion in the gallbladder [20], which can help to diagnose GBC. Survivin, an inhibitor of apoptosis, played a possible role and was associated with poor prognosis [21]. SUMO-1 mRNA may be an interesting target in the diagnosis and treatment of GBC based on the differences expression in carcinoma of gallbladder, gallbladder tissues surrounding GBC, adenomatous polyp of gallbladder [22]. In addition, research on the positive expression of CD-146 [23], VEGF, Flt-1 and KDR [24] were also related to the incidence of GBC.

miRNA is involved in the initiation and progression of GBC (Table 2), and miRNA expression profiling can be used to identify signatures associated with diagnosis, staging, progression, prognosis and response to treatment [25]. miRNAs participate in a variety of regulatory pathways, and the expression level of miRNAs is closely connected to survival of patients with GBC. For example, patients with a high miRNA-155 expression level had distinctly shorter overall survival than patients with a low miRNA-155 expression level [26]. In addition, high miR-155 expression was related to aggressive GBC, and it may be a potential prognostic marker and therapeutic target [27]. miR-146b-5p inhibited growth of GBC by targeting epidermal growth factor receptor [28]. miR-335 may be associated with aggressive tumor behaviors and reduced expression of miR-335 may be a useful indicator for clinical outcome and could be a therapeutic target for primary GBC [29]. miR-29c-5p, a tumor-suppressive miRNA that may serve as a potential prognostic biomarker or therapeutic target for GBC, suppressed GBC progression by directly targeting CPEB4 and inhibiting the MAPK pathway [30]. Moreover, miR-133a-3p acted as a tumor suppressor by directly targeting the recombination signal-binding protein Jk (RBPJ) in GBC [31]. Another miRNA, miR-26a, may contribute to GBC proliferation by directly targeting HMGA2 and might be a prognostic factor and therapeutic target for GBC patients [32].

Table 2: Some abnormal miRNAs in GBC and their target mRNAs.

Through recent research, long non-coding RNAs also have been determined to play important roles in GBC pathogenesis [33]. Long non-coding RNA SPRY4-IT1 promoted GBC progression and may serve as a candidate target for new therapies in human GBC [34]. In addition, CRNDE was found an important contributor to GBC development as a scaffold to recruit the DMBT1 and c-IAP1 and affect PI3K-AKT pathway [35]. Furthermore, upregulation of HOXA-AS2 promoted proliferation and induced epithelial-mesenchymal transition in GBC, and it could be as a potential therapeutic target to inhibit GBC metastasis [36]. Another study showed that UCA1 promoted GBC cell proliferation and metastasis in vitro and suppressed the transcription of p21 and E-cadherin by recruiting an enhancer of the zeste homolog [37]. Moreover, lncRNA-H19 was a novel prognostic factor for GBC and might play important regulatory roles in the epithelial-mesenchymal transition (EMT) process [38]. Overexpression of lncRNA-LET conferred a proliferative advantage to tumor cells under hypoxic conditions. The ectopic expression of lncRNA-LET led to promotion of cell cycle arrest at G0/G1 phase and induction of apoptosis under hypoxic conditions. Abnormal expression of lncRNA-LET also suppressed gallbladder tumor growth, and lncRNA-LET was determined to a potential prognostic marker and therapeutic target for GBC [39].

Table 3: Some examples of the relationship between lncRNAs and micRNAs/mRNAs in GBC. 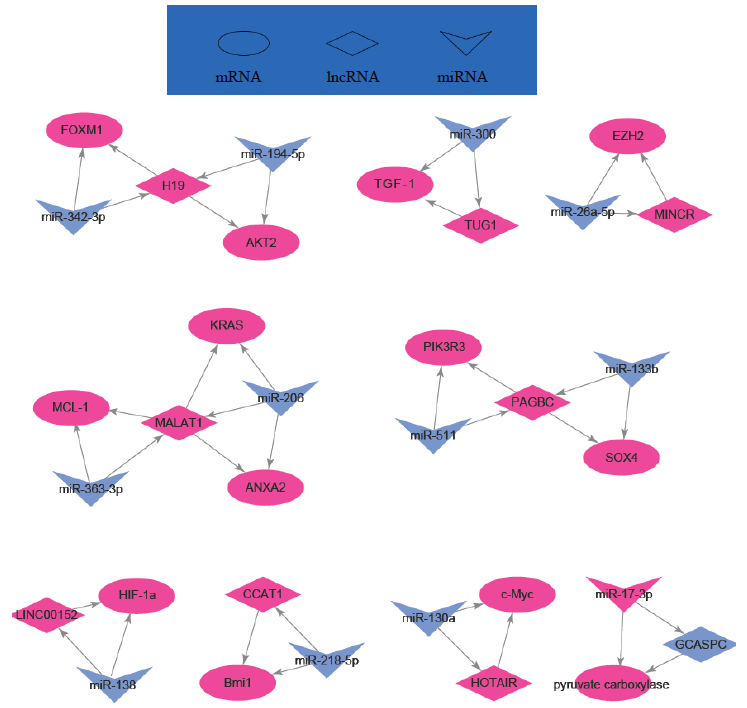 Figure 2: Regulation network of some lncRNAs, mRNAs and miRNAs in GBC.

Compared with molecules above mentioned, crucial proteins also contribute to diagnosis and treatment of GBC [65, 72]. The modification of proteins, mainly including protein phosphorylation and acetylation, may contribute to abnormal expression and/or function. Many proteins impacting on GBC have been reported (Table 4).

Table 4: Some key proteins in GBC.

Phosphorylation also contributed to diagnosis and treatment of GBC [76]. For example, CD133 had a role in the migration of GBC cells through phosphorylation [74] and MUC4 interacted with ErbB2 to cause tumor growth, which was related to the hyperphosphorylation of ErbB2, MAPK and Akt [73]. Research on cirsimaritin showed that the pro-apoptotic effect of cirsimaritin could be reversed by down-regulating the phosphorylation of Akt [77] and affected the GBC-SD cell line. In addition, the protein phosphatase PHLPP was found to help treat GBC by inhibiting survivin phosphorylation [78]. Rise of CCK1 receptor expression is associated with the increase of protein lysine acetylation [79], showing that GBC can be treated by using histone deacetylase inhibitor [80].

Although many factors are related to GBC, but GBC still cannot be diagnosed accurately in clinical settings. A clinical experiment in the Queen Mary Hospital, University of Hong Kong showed that 61% of patients had an inaccurate diagnosis [81], which showed that diagnosis is difficult in the early stage. Operative resection is still the only way to cure GBC, but unfortunately, only 38% of patients have been eligible for resection during the last 20 years. Furthermore, one report showed that none of the patients without surgery survived more than 5 years [82]. Therefore, the challenges of treating GBC are serious because only surgery in the early stage can cure GBC, but most patients are diagnosed at the intermediate or advanced stage.

Because of the current challenges and problems in the diagnosis and treatment of GBC, new methods for treating GBC must be developed. To this end, targeted therapy may be an effective way to cure GBC. Targeted therapy has been proved to affect GBC in clinical trials in the Clinical Center for Targeted Therapy at the MD Anderson Cancer Center [83]. GBC still cannot be readily cured by targeted therapy, especially in the advanced stage, and almost all patients who do not have surgery currently die within 1 year following clinical treatment [84]. Chemotherapy is another adjuvant therapy for GBC in clinical settings. During a randomized controlled study, patients who underwent chemotherapy after surgery had a higher 5-year survival rate than those with surgery alone. However, adverse drug reactions, such as anorexia and leukopenia, were usually associated with chemotherapy [85].

Research on the pathogenesis and prognosis of GBC has made great progress, and genes have been determined to be possible markers for prognosis. Lupeol in the EGFR/MMP-9 pathway was proved to induce apoptotic cell death in GBC, which can be used as a potential treatment method [86]. Long non-coding RNAs of LINC00152 and CRNDE in the PI3K-AKT pathway contribute to process of GBC carcinogenesis, and PI3K/AKT may be a potential therapeutic target for GBC [75, 85].

Taken together, in this review, the multiple molecular signatures in GBC were concluded. We hope that these potential signatures can provide some references for diagnosis and therapeutic of GBC.

This work was supported by the National Natural Science Foundation of China (No. 61771251), the key project of social development in Jiangsu Province (No. BE2016773), the National Natural Science Foundation of Jiangsu (No. BK20171443), Sponsored by NUPTSF (Nos. NY215068 and NY217100), the Qinglan Project in Jiangsu Province, and the Priority Academic Program Development of Jiangsu Higher Education Institution (PAPD).