The Efficacy of Doppler Indices in Third Trimester of IUGR Pregnancies

Objective: To identify the usefulness of Doppler indices in the third trimester for intra-uterine growth- restricted pregnancies.

Materials and Methods: It was an observational case-control study of singletons with intra-uterine growth restriction (fetal weight <10th percentile). Intra-uterine growth restricted fetuses (cases) and normal (controls) were examined for the umbilical artery. Time intervals between progressive Doppler abnormalities and configurations of worsening were related to umbilical artery Doppler status and gestational age. This study was conducted from August 2015 to January 2016 at Gilani Ultrasound Center Lahore Pakistan. A total of 60 pregnant females were studied with normal and abnormal umbilical artery Doppler ultrasound.

Intrauterine growth restriction is a sonographic estimated fetal weight which is <10th percentile for gestational age [1]. Bloodstream in the umbilical cord is typically high flow and low resistance with the increased end-diastolic flow as gestational age advances [2]. Color Doppler evaluation plays an imperative role in pregnancy and widely acknowledged functional methods of evaluating fetal wellbeing. Flow velocity waveforms provide essential information from the early stages of pregnancy to term. Umbilical arterial Doppler waveforms reflect the status of the placental course, and an increase in end-diastolic stream that is seen with advancing gestation is a direct result of an increase in the number of tertiary stem villi that takes place with placental maturation [3]. Diseases that obliterate small muscular arteries in placental tertiary stem villi result in a progressive decrease in end-diastolic flow in the umbilical arterial Doppler waveforms until absent, and then reverse flow during diastole is noted [4]. Reversed diastolic flow in the umbilical arterial circulation represents an advanced stage of placental compromise, and is associated with more than 70% of placental arterial obliteration [5]. The absent or reversed end diastolic flow in the umbilical artery is commonly escorting with severe intrauterine growth restriction and oligohydramnios [6]. The cerebral circulation is normally a pronounced impedance circulation with the continuous forward flow throughout the cardiac cycle [7]. The middle cerebral artery is the most accessible, cerebral vessel to ultrasound imaging in the fetus, and it brings more than 80% of cerebral blood flow [8]. In fetal hypoxemia, central redistribution of blood flow occurs, resulting in increased blood flow to the brain, heart, and adrenals, and a lessening inflow to the peripheral and placental circulations. This blood flow redistribution is known as the brain-sparing reflex, and plays an important role in fetal adaptation to deprivation [9]. Arterial Doppler abnormalities, at the level of the umbilical and middle cerebral arteries (brain-sparing reflex), confirm the presence of hypoxemia in intra-uterine growth restriction fetuses, it represents early cautioning signs [10]. The aim of this study was to Doppler velocimetry has enhanced our diagnosis that the occurrence of such abnormal late stage changes of vascular adaptation by the (intra-uterine growth restriction) fetuses appears to be the best predictor of perinatal mortality, and morbidity independent of gestational age and weight.

Study was conducted after approval from institutional review board. 60 cases of normal and suspected intra-uterine growth restriction visited us during study interval were included. Toshiba Nemio-30 with convex transducer having frequency 3. 5-5 MHZ used for scanning the patients. Before the examination procedure was explained to each patient and informed consent was obtained. The abdomen-o-pelvic area was uncovered, transmitting gel was applied. The transducer was placed over the Para uterine region and free-floating umbilical cord was found on real-time gray scale ultrasound then applied color Doppler and Pulsed Doppler. The superlative setting was pragmatic on pulsed Doppler to avoid aliasing. The sample volume was selected at mid cord level and the waveform was gained at least 2-3 times per patient. Doppler indices were deliberate. Pregnant ladies with singleton pregnancies in the third trimester of pregnancies with certain last menstrual dates were recruited. All fetuses with differences of less than 3 standard deviations in their biometric parameters were included. The indices (PI, RI and SD ratio) were recorded and diastolic flow on the spectral waveform as decreased, absent or reversal of flow. Collected information was entered into the statistical package of the social sciences for analyzed.

In this study total 60 pregnant females were recruited and Doppler indices measurements were obtained.

Table 2: Normal and IUGR cross tabulation with G. A. 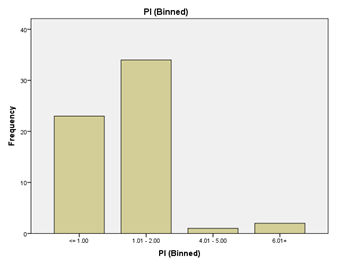 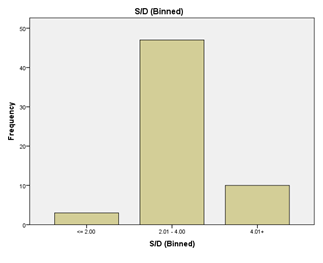 This study has provided evidence that Doppler indices (PI, RI, and S/D ratio) in intra-uterine growth restricted fetuses are directly proportional to gestational age while in normal fetuses they are inversely proportional. The findings of this study are similar to previous studies. These findings will help to reduce mortality and morbidity in IUGR suspected fetuses by timely diagnosis and management.