Stabilization of Visual Field With Intravitreal Triamcinolone in Cancer-Associated Retinopathy: A Case Report and Review of the Literature

A 53 year old male with leukemia presented with optic disc pallor, attenuated retinal vessels and peripheral visual field loss confirmed on formal testing. Anti-retinal antibodies were detected by immunohistochemistry confirming the diagnosis of cancer- associated retinopathy (CAR). Hematology continued systemic chemotherapy but did not recommend systemic immune suppression as a safe treatment for the paraneoplastic eye disease. The patient received a single injection in the more severely affected eye of intravitreal triamcinolone and had initial improvement then ultimately stabilization of the visual field loss and optic nerve pallor without any side effects from the intraocular steroid injection. This case demonstrates that intraocular corticosteroid can be a safe, efficacious, local treatment option for cancer associated retinopathy.

1. Introduction
Cancer-associated retinopathy (CAR) is a challenging clinical entity with often delayed diagnosis and difficult prognosis. The condition occurs in patients with typically known systemic malignancy but can precede cancer diagnosis. The clinical phenotype is varied, but typically includes optic nerve pallor, retinal vascular attenuation and visual field loss in the absence of obvious peripheral retinal abnormalities. Diagnosis is typically confirmed by serologic testing for anti-retinal antibodies. Numerous treatment options including systemic immune suppression with intravenous corticosteroids, intravenous immunoglobulins (IV Ig), and plasmapheresis have been used with mixed results. Even with treatment of the systemic malignancy, the prognosis typically involves worsening visual field loss. Anecdotal reports of intravitreal (intraocular) steroid injections have been able to demonstrate stability of visual field loss. This case report details the course of a patient with serologically confirmed cancer- associated retinopathy who showed initial improvement and later stabilization of visual acuity, optic nerve structure and function after a single intravitreal steroid injection in one eye.

3. Case History
A 53 year old male with leukemia presented with small intra-retinal hemorrhages and mild optic disc pallor. Visual acuity was 20/25 in the right eye and 20/50 in the left eye. Blood pressure was well controlled and work up for diabetes mellitus was negative. Systemic chemotherapy was being administered and blood counts were responding appropriately. After a few months, the hemorrhages resolved but the patient described loss of peripheral vision. Examination at that time revealed stable visual acuity, but more pronounced optic disc pallor, attenuated retinal vessels without hemorrhages (Figure 1) and peripheral visual field loss confirmed on formal testing (Figure 2). Retinal nerve fiber layer OCT (RNFL-OCT) showed thinning of both optic nerves (Figure 3). Intraocular pressure and gonioscopy were normal and there were no intracranial, chiasmal, or intraorbital lesions on Magnetic Resonance Imaging (MRI). In the absence of other detectable causes of these findings, cancer associated retinopathy was suspected and anti-retinal antibodies in the serum were detected via immunohistochemistry. 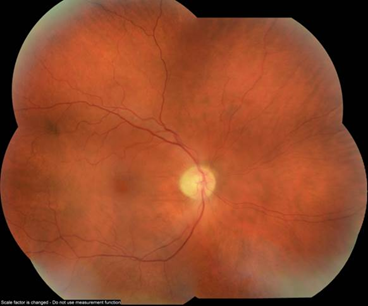 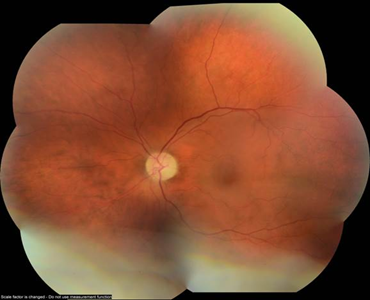 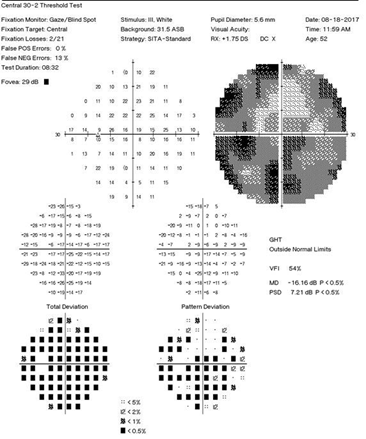 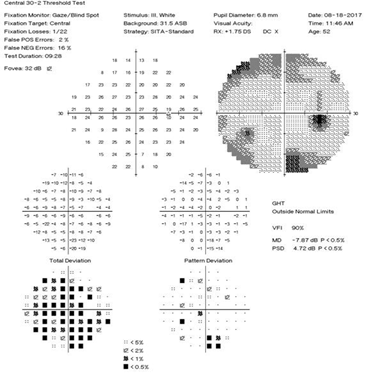 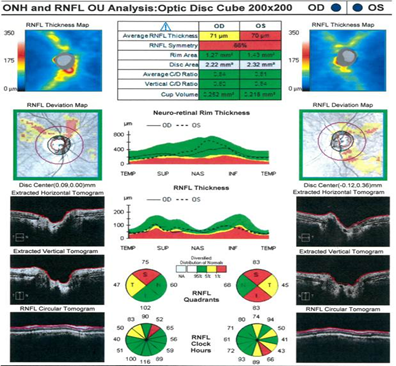 4. Treatment and Results
Alternative treatment options for cancer-associated retinopathy were reviewed with the patient and included intraocular corticosteroid injections as used previously in anecdotal case reports [1, 2]. The patient elected to receive an injection of preservative free intravitreal triamcinolone acetonide (Triescence, Alcon) 4mg/0.1mL in his more severely affected left eye. Over the next several weeks, he demonstrated improvement in the visual field defect in the left eye as (Figure 4) well as the retinal nerve fiber layer OCT (Figure 5). The patient did not develop elevated intraocular pressure or cataract in the treated eye. The patient was advised to consider an intravitreal triamcinolone injection in his right eye, but he elected to hold off on treatment in his more mildly affected right eye. 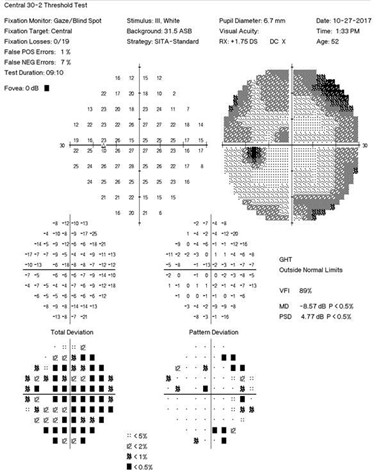 Over the next several months, the patient had improved systemic health requiring less frequent intravenous immune globulin infusions for his hypo-gammaglobulinemia. He did not receive any further intraocular corticosteroid injections and ultimately had only mild regression of visual field loss in the treated left eye (Figure 6) with maintained visual acuity to near baseline (20/30 in the right eye and 20/50 in the left eye). This case demonstrates the utility of intravitreal triamcinolone injections as a treatment option for cancer-associated retinopathy but also a reminder of its finite duration of action. 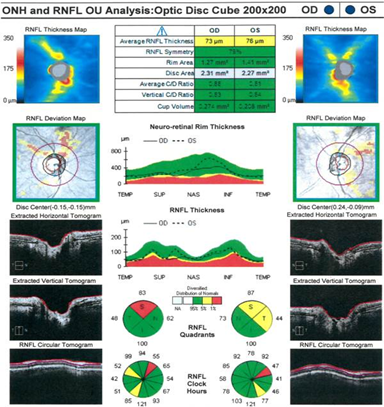 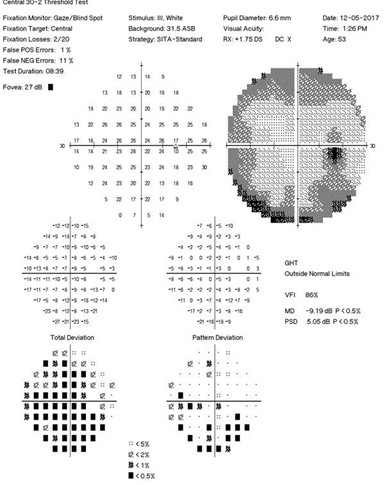 5. Discussion
Currently, no effective treatment regimens exist for cancer-associated retinopathy. Treatment of the underlying malignancy with chemotherapy, radiation or surgical removal does not improve vision or affect the course of the ocular disease [1,3]. Cancer-associated retinopathy therapies typically include long-term immunosuppression with oral or intravenous steroids, intravenous immunoglobulin (IV Ig), azathioprine, mycophenolate mofetil, cyclosporine, infliximab, and various combinations of these immunosuppressive medications [1, 4]. However, in many patients like ours, long-term immunosuppression may not be advised as it may inhibit the innate immune response to the underlying malignancy. As a result, more localized ocular treatment options are needed.

In recent years, localized corticosteroid treatments have been explored for CAR. Huynh, et al demonstrated restoration of photoreceptor anatomy on optical coherence tomography and visual field improvement in a single patient treated over 31 months with serial intravitreal injections of triamcinolone without side effects from the repeated steroid injections [1]. The authors suggest that the initial visual acuity improvement could have been partially attributed to the resolution of cystoid macular edema (CME). However, once the CME resolved, the patient experienced fluctuations in visual acuity without CME. These changes did respond to repeated intravitreal triamcinolone injections, although the number of injections and treatment interval was not disclosed [1].

Periocular (sub-Tenon’s) corticosteroid injections have shown functional benefits of maintained visual acuity and/or improved visual fields [2, 3, 5]. Another group, Maeda et al, demonstrated anatomic benefit in a murine model of CAR with a trend toward improved survival of outer nuclear layer cell bodies following subconjunctival injection of triamcinolone. In this report, however, functional electroretinography (ERG) did not improve [6]. Clearly, intraocular or regional corticosteroids can be used in cancer associated retinopathy, but structural and functional results are variable.

This single patient case review of preservation of a visual field constriction and visual acuity after intravitreal triamcinolone (Triescence) demonstrates that it can be a safe, efficacious local therapy for cancer associated retinopathy, particularly in patients in whom systemic immune suppression may not be well tolerated. While these results may not be generalizable to other patients with CAR, they do demonstrate a measurable albeit finite treatment effect due to the half-life of the intravitreal steroid. It can be presumed, although not definitely known, that another intravitreal steroid could have produced a similar benefit.

It is unclear if the same result would have been repeated if the patient’s fellow eye would have received the same therapy. It is interesting that as the patient’s systemic health improved over the months after the initial intravitreal steroid treatment, that the visual field and retinal nerve fiber layer studies showed stabilization in both the treated and untreated eye. As the patient was receiving intravenous immunoglobulins (IVIg) as a primary immune boosting therapy rather than a treatment specifically for cancer associated retinopathy, it is also notable that he received these treatments less frequently as the study period progressed. IV Ig is regarded as one of the systemic treatments for cancer associated retinopathy, but perhaps receiving the infusions less often allowed for intrinsic development of antibodies against the anti-retinal antibodies, allowing stabilization of the cancer associated retinopathy. As the assay for anti- retinal antibodies is qualitative rather than quantitative, it is unlikely that repeating the serum immunohistochemistry would yield additional information which would affect the course. The patient will continue to be followed and his course monitored.