Background: Cardiogenic shock (CS) is the clinical representation of circulatory failure with a state of critical end-organ hypoperfusion due to primary cardiac dysfunction. A severe cardiogenic shock can present with clinical complications such as arrhythmias, ischemia and organ failure and even today is associated with a high mortality of 40-50%. Extracorporeal life support (ECLS) by veno-arterial extracorporeal membrane oxygenation (VA-ECMO), Impella® and other mechanical circulatory support systems can reduce the acute circulatory failure and therefore constitute an important treatment option in the management of severe CS as a bridge to long-term strategies.

Case summary: We present the case of a 38-year-old woman with an acute heart failure due to a coronary artery disease who underwent emergency coronary artery bypass grafting and intraoperative implantation of a veno-arterial extracorporeal membrane oxygenation (VA-ECMO). Over the next 4 months, a multidisciplinary team-approach bridged the patient using first a left ventricular (LV) support system (Impella), then additionally a right ventricular (RV) Impella and finally a temporary paracorporeal continuous flow left ventricular support (Rotaflow). Following a promising neurological recovery, a long-term left ventricular assist device (LVAD) was implanted in a bride to transplant (BTT) concept.

Discussion: The addition of LV Impella and RV support by Impella (BiPELLA) on top of VA-ECMO may support survival of patients with refractory cardiogenic shock. In complex biventricular heart failure, an expert center must be able to provide an early multi-modular intervention with elaborated mechanical circulatory support due to a multidisciplinary expertise.

Cardiogenic shock (CS) is the clinical presentation of circulatory failure with multiorgan dysfunction complicated by hemodynamic, cellular and metabolic abnormalities [1, 2]. The most frequent cause of CS is acute myocardial infarction (AMI) accounting for 80% of cases in registries [2]. In the treatment of severe CS temporary mechanical circulatory support such as ECMO or Impella® can be used as a bridge to recovery (BTR), as a bridge to an implantation of a left ventricular assist device (bridge-to-bridge, BTB), as bridge to decision (BTD) or sometimes as a bridge to transplantation (BTT) [1, 3, 4, 5]. Few studies have shown that the addition of an Impella® device to a VA-ECMO (´ECPELLA´ or ´ECMELLA´) was associated with improved survival of patients with refractory CS [6, 7]. There are small series with different proposals of unloading not only the LV Impella as an ECPELLA or ECMELLA concept, but also with a LV and a RV Impella (BiPELLA) or a prolonged Impella (PROPELLA) with improved survival outcomes [8]. In view of the increasing therapeutic options, a multidisciplinary expert-team approach to patients in cardiogenic shock becomes highly important [9, 10].

A 38-year-old woman was referred to our institution from a peripheral hospital with progressive dyspnea for months with aggravation in the last three weeks, and bilateral pleural effusions (Table 1; Figure 1); no symptoms of angina, negative family history, risk factor of moderate smoking for many years. Echocardiography revealed a severely reduced left ventricular function with an ejection fraction of 10% with global hypokinesia and apical akinesia and a moderately reduced right ventricular function. Moderate mitral and tricuspid regurgitation were documented. Initial hemodynamic support with dobutamine and noradrenaline was stopped driven by a beginning ischemia of the feet. Under the suspicion of an incipient pneumonia, blood cultures were collected and an antibiotic therapy initiated. Cardiac catheterization revealed a severe three-vessel coronary artery disease. 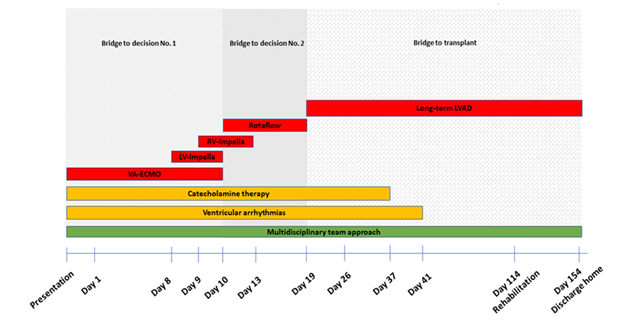 Extensive laboratory screening for vasculitis and rheumatologic causes revealed no abnormalities. However, a dyslipidemia with significantly increased lipoprotein (Lp) (a) was detected. Postoperatively the patient developed acute kidney injury with the need for continuous renal replacement therapy (CRRT).

During the next days, the patient suffered repeated episodes of malignant ventricular arrhythmias requiring defibrillations and multiple antiarrhythmic therapies including magnesium, amiodarone, lidocaine, ajmalin and propranolol. LV- function remained poor and reduction of ECMO flow failed. Following a prolonged episode of refractory ventricular arrhythmias on the 7th postoperative day the decision to unload the left ventricle by implantation of a left ventricular Impella (Impella CP®, Abiomed) was made.

Compromised right heart function led to implantation of a right ventricular Impella (Impella RP®, Abiomed) to prepare the implantation of a LVAD-system in a bridge to transplant concept (Figure 2). Spontaneous left sided hemothorax due to thrombocytopenia and severe hemolysis under dual Impella therapy demanded a strategy change. Due to the inconclusive neurological status we were reluctant with a permanent LVAD support at this point. Hence, a temporary paracorporeal left ventricular assist in terms of a 36F inflow cannula inserted via the left ventricular apex, a centrifugal pump (Rotaflow®, Gettinge, Solna, Sweden) and an 19F outflow cannula inserted into a 10 mm Dacron-Prothesis that was anastomosed to the ascending aorta was implanted. Simultaneously, the hemothorax was drained and the LV- Impella as well as the femoral VA-ECMO cannulas were explanted (Figure 3).

3 days later the RV-Impella was weaned and explanted. Under stable hemodynamic conditions the sedation was reduced, the patient remained adynamic but could move her extremities. Furthermore, a cerebral CT showed no evidence of hypoxic sequelae or intracranial bleeding. Thus, a permanent LVAD (HeartMate 3TM, Abbott, USA) was implanted on the 19th day of her stay (Figure 4). Subsequently the patient gradually recovered, was responsive, opened her eyes and adequately moved her extremities. 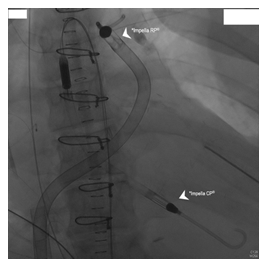 *Impella CP® - Left ventricular Impella was inserted on the 8th day through a standard catheterization procedure through the femoral artery, into the ascending aorta, across the aortic valve into the left ventricle.

*Impella RP® - Right ventricular Impella was inserted on the 9th day thought a standard catheterization procedure through the femoral vein and into the right atrium, across the tricuspid and pulmonic valves into the pulmonary artery. 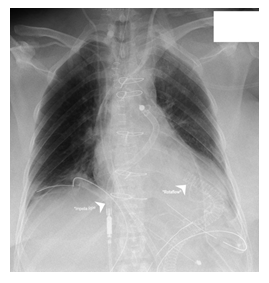 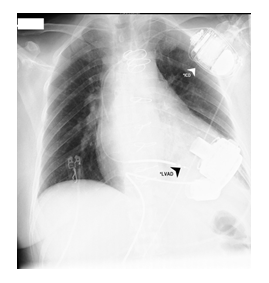 On the 23rd day the computer tomography of the brain showed no focal abnormalities and the patient was extubated. On the 35th day the patient suffered of malignant ventricular arrhythmia for nearly 20 minutes with re-intubation and mechanical ventilation requiring 12 defibrillations, multiple antiarrhythmic therapies and cardiopulmonary resuscitation for 20 minutes. Coronary angiography showed open venous coronary artery bypass grafts but occluded LIMA graft. The hemodynamic situation improved during the next days and the patient was successfully weaned and extubated again.

On the 41st day she was resuscitated for approximately 30 minutes following sudden hypotension, bradycardia and respiratory failure. Intubation and successful resuscitation bronchoscopy revealed severe lower airway obstruction by blood clots most likely due to epistaxis. Percutaneous tracheotomy was performed on the next day and cerebral CT scans showed no pathological findings.

On the 59th day the patient was successfully weaned and decannulated. Temporary right sided hemiparesis that had been observed following the resuscitation gradually resolved under intensive physiotherapy. Renal function also recovered so that renal replacement therapy was discontinued.

On the 72nd day an implantable cardioverter-defibrillator (Medtronic Evera MRI S VR SureScan) was implanted. High-dose vasopressor therapy had led to pronounced acral necrosis of both feet. After initial conservative therapy with provision of temporary ortheses and frequent wound management, amputation of the I/IV digits of the left foot were performed in addition to an extensive debridement of necrotic tissue of both feet.

Frequent psychosomatic treatments focusing on strengthening resources, disease acceptance, disease insight, coping with acute somatic events and separation from the family were provided. She was transferred to a qualified rehabilitation facility with only minor neurological residues (limited mobility of the right leg) without any cognitive dysfunction after a total of 114 days after initial admission. She was discharged home on day 154.

We report a case of a young woman with cardiogenic shock following severe coronary artery disease. Assumingly, the well-balanced combination of different options for ventricular support in early response to the individual course of the patient guided by an interdisciplinary team was the key to successful management of this extraordinary case (Table 1; Figure 1). Mortality in cardiogenic shock is about 40% [2]. In patients with acute heart failure and hemodynamic instability (INTERMACS level 1 und 2) short-term mechanical circulatory support (MCS) may be used to stabilize the patient, to gain time for further decisions on definitive therapy [1]. In a cohort of patients with cardiogenic shock in myocardial infarction Thiele [11] identified a subgroup of 15-25 % that will possibly survive by a MCS device, while 50-60 % will survive without a MCS and 25-35 % will die with or without a MCS (e.g. brain death, sepsis).

Different options for MCS are currently available. However, for a positive outcome the right choice of the device as well as proper timing for initiation as well as for escalation or de-escalation appear to be of paramount importance [5]. VA-ECMO provides complete cardiopulmonary support and is widely used in cardiothoracic surgery [5]. It is independent from the patient´s rhythm and even in malignant arrhythmias will show no flow alterations [2]. However, VA-ECMO in it’s peripheral (femoral) form may cause LV distension due to high afterload. LV distention in turn can exacerbate myocardial ischemia, trigger arrhythmias and may lead to pulmonary edema. Truby [12] found 7% of patients to have a high and 22% to have considerable LV distension on VA-ECMO. In the literature there are suggestions for LV unloading not only by inotropic support, but also by IABP, Impella and other surgical techniques [13].

A retrospective study by Pappalardo et al. [6] showed a significantly lower in-hospital mortality (40% vs. 74%) and a higher rate of a successful bridging to long-term strategies or recovery (62% vs. 30%) in patients treated with concomitant VA-ECMO and Impella® as compared to treatment with VA-ECMO alone. In the largest US-based retrospective study, VA-ECMO (n=36) vs. ECPELLA (n=30) in patients with refractory cardiogenic shock, the combined treatment with Impella® and VA-ECMO was associated with lower all-cause 30-day mortality, lower need for inotropic support and a comparable safety profile [7]. A metanalysis of 17 observational studies published in 2019 showed a lower mortality with different forms of LV unloading (54% vs. 65%), but in patients with additional Impella markedly more hemolysis was noted [14]. Therefore, the combination of VA-ECMO and Impella should be restricted to a limited period of time. LV and RV Impella (BiPELLA) could be indicated in patients with a biventricular failure and contraindications to VA-ECMO. A simultaneous initiation of support with BiPELLA can be associated with improved survival outcomes [8]. A further research is required to provide evidence of the effectiveness of BiPELLA and an implantation of BiPELLA on top of a VA-ECMO.

The implantation of a temporary extracorporeal left ventricular assist device (e.g. Rotaflow®) can bridge over a longer time period to a permanent device in unclear conditions. In the literature one case with a bridge to recovery is reported, in our case it was a bridge-to-bridge concept [15]. The most frequent complications are bleeding, thromboembolism and vascular complications, followed by neurological and respiratory problems [3]. A multidisciplinary heart-team (including cardiothoracic surgeons, cardiologists, anesthesiologists, intensive care specialists, and perfusionists) should join expertise to select and rapidly intervene on patients with severe cardiogenic shock [9, 10]. Tehrani et al [10] suggested the implementation of a multidisciplinary standardized team approach. In their observational study a standardized team approach could significantly increase 30-day MCS survival from 47 to 77% [10]. We highly recommend the additional implementation of psychological and psychosocial support for the patient, the family and the team as well as access to ethical advice and palliative care as proposed in the European Guidelines and in the scientific statement of the American Heart Association [1]. In conclusion, the addition of LV Impella (CP®) implantation and RV support by Impella (RP®) (BiPella) on top of VA-ECMO may support survival outcomes in refractory cardiogenic shock. In uncertain situations a paracorporal (short-term) LVAD (Rotaflow) can be used as a ´second bridge´ to long-term mechanical support with LVAD.

The authors confirm that written consent for submission and publication of this case report including images and associated text has been obtained from the patient in line with COPE guidance.