Trastuzumab is a humanized monoclonal antibody directed against the human epidermal growth factor receptor 2 (HER2). The combination of trastuzumab with chemotherapy has been shown to improve survival in both the metastatic and adjuvant settings [1,2,4].

Thrombocytopenia induced by trastuzumab is a very rare incident, we report one case of this severe and potentially life-threatening complication associated to trastuzumab biosimilar.

Several trastuzumab biosimilars are gradually entering the mondial market. These biosimilars represent an important opportunity for society in terms of cost savings and for patients by opening up treatment access. The different trastuzumab biosimilar candidates have followed diverse pathways in their clinical development, with differences in clinical trial design, these differences in approach in phase 3 testing must be viewed in the totality of evidence demonstrating biosimilarity [3].

A 64-year-old woman was diagnosed with hormone receptors-positive, HER2- positive breast cancer in March 2019, she underwent patey's operation for left breast.

Histopathological examination showed invasive ductal carcinoma, with grade SBR III, size 3 cm, ductal carcinoma in situ and lymphovascular invasion were found, she had 23 lymph nodes removed from the right axilla and one of them was positive, diagnosis of stage II B (p T2N1M0) was made.

During the first infusion of trastuzumab, she presented an allergic reaction: dyspnea and hot flashes, with stable hemodynamic et respiratory parameters, infusion was interrupted, she was given 100 mg IV hydrocortisone and 5 mg IV dexchlorphéniramine. After 30 min, the symptoms had resolved and the infusion was restarted, the rest of infusion of trastuzumab was uneventful until 6 hours after infusion, and the patient was planned to receive the taxane the next day.

The next day, the patient turned to the department of oncology with generalized petechiae and oral hemorrhagic blisters (Figure 1). She was afebrile and cardiovascularly stable, Investigation revealed a hemoglobin level of 7.7 g/dL, white blood cell count of 9.2 × 10*3/ ‎mm3, and platelet count of 2 × 10*3/ ‎mm3. She was hospitalized and multiple platelet transfusion was administered. On the next day, her platelet count was 37×10*3/ ‎mm3. 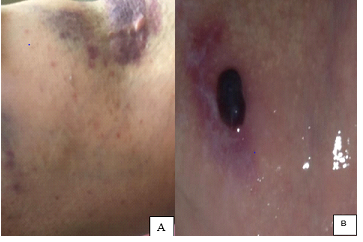 Figure 1: purpuric rash covering the entire body (A) and oral hemorrhagic blisters (B)

She was treated with intravenous corticosteroids (Methylprednisolone 2mg/kg dialy) for 5 days.

The platelet counts were recovered 10 days later, their number was within normal limits (Figure 2). 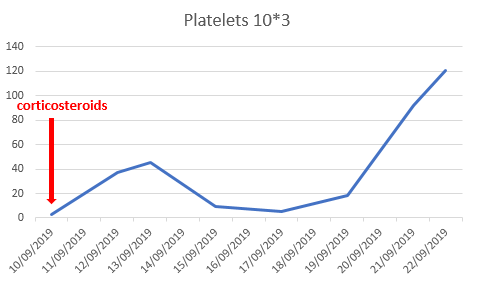 In view of her complete recovery of platelets, she did not undergo a bone marrow investigation.

Diagnosis of trastuzumab-induced thrombocytopenia was made, we proposed the patient re-exposure to trastuzumab while explaining the risk benefit and she accepted.

The patient was re-exposed to trastuzumab using the reference product subcutaneously without a change in the platelet count.

Based on these criteria it is apparent that the thrombocytopenia was probably a result of the loading dose of trastuzumab.

This is a rare incident with trastuzumab, in the Hannah study, only one patient had thrombocytopenia with febrile neutropenia in population with subcutaneous trastuzumab, who died with septic shock [13], and the final analysis of this trial published on april 18, 2019 at jama oncology did not noted an unexpected safety signal [14].

The demonstration of similar immunogenicity is a critical requirement for the demonstration of similarity between a biosimilar candidate and the respective reference product. The clinical development of a biosimilar includes head-to head clinical studies to assess potential differences in immunogenicity between the two products.

The development and validation of Anti-drug Antibodies ADA assays  to assess the immunogenicity of a biosimilar should follow the same guidance set by the FDA and EMA for any therapeutic protein. However, during assay development and subsequently the assay validation, the originator should also be tested in select experiments to ensure the assay’s similar ability to detect antibodies against biosimilar and originator, and similar reactivity of the two drug products with the positive control [16,17].

Trastuzumab biosimilar used in our patient have been tested in phase 3 trial, and the equivalence in efficacy, immunogenicity and safety was comparable to Herceptin [18].

The immunogenicity profile was low, similar between the 2 products and consistent with published data with trastuzumab showing a low immunogenic potential. Baseline positivity for antidrug antibody in a small number of patients is expected.

Given the increasing use of this agent, it is important that clinicians are aware of this rare toxicity.