Objective: To assess the role of endometrial scratching in implantation failure cases.

Conclusions: The local injury caused by endometrial scratching though result in local inflammation and angiogenic environment in uterus but it does not improve the pregnancy rate. Further studies are needed to prove the efficacy of endometrial scratching with larger sample size. This is one of the few studies done in South Asia that showed scratching has no role in implantation failure.

Embryo implantation is an essential well-coordinated event which require multiple steps and signals between the embryo and endometrium. Successful implantation depends on many factors like egg quality, sperm quality, high quality embryo, receptive endometrium, and perfect embryo transfer technique [1]. Endometrium is very important for embryo implantation and the endo-metrial thickness is the marker of receptivity of the endometrium. It is used as a prognostic factor in embryo transfers [2, 3]. The receptive endometrium requires proliferation and thickening of the endometrium, syn-chronization of the micro architectural changes of the endometrium with the stage of embryo development and the presence of a proper cytokine environment [4]. In most of the cases it can be achieved by using estrogen and progesterone. But in some cases, in spite of all types of medications including hormonal medications, vasodilators, blood thinners, implantation failure occurs. In 2003, Barash et al showed that local injury of the endometrium caused by endometrial scratching (ES) increases the incidence of implantation in IVF failure [5]. The basic concept of ES involves injury to endo-metrium lead to acute inflammatory reaction, followed by repair, resulting in the release of cytokines and growth factors known to promote implantation. Local stimulation of endometrium induces decidualization with inflammation which significantly increases the level of macrophages, dendritic cells, and proinflam-matory cytokines, including TNF-α, growth-regulated oncogene-α, and macrophage-inflammatory protein-1B (MIP-1B) Scratching during the preceding cycle may suppress proliferation and thus optimize synchronicity between the endometrium and the embryo to be transferred [6]. In this study, we assessed the role of endometrial scratching in implantation failure cases.

The study was conducted at Advanced fertility and gynaecology center, New Delhi from July 2019 to December 2019. Patients with primary infertility between the age group of 23 to 35 years were included in the study. We had evaluated 60 infertile females with at least one IVF failure. In the group 1 of 30 females, endometrial scratching was done between Day 21 to 25 of previous periods and in the group 2 of 30 females, endometrial scratching was not done. Controlled ovarian stimulation (COH) was started from day 2 of next period in all subjects with the antagonist protocol. 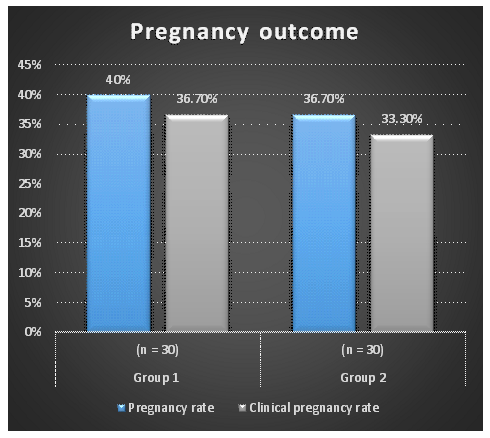 Implantation is rate limiting step in process of IVF. As per proposed mechanism, local injury caused by endo-metrial scratching result in local inflammation and angiogenic environment in uterus which improves the implantation in IVF failure cases. But as we know number of other pathologies may be responsible for implantation failure which should be corrected on being diagnosed. Many studies were conducted to assess the role of endometrial scratching in repeated implantation failures. Most of the studies had relatively small sample sizes with heterogeneity in statistical analysis. Shohayeb A and El-Khayat W conducted a prospective rando-mized controlled trial on two-hundred infertile women with a history of repeated implantation failure and showed that single endometrial biopsy regimen (S-EBR) performed during hysteroscopy had statistically signify-cant higher implantation rate, clinical pregnancy rate and live birth rate than hysteroscopy without endome-trial scraping. The implantation rate in scratching group (group A) was 12% while in non-scratching group (group B) it was 7% (p=0.015), the clinical pregnancy rate was 32% in group A while it was only 18% in group B (p=0.034) and the live birth rate was 28% in group A while it was 14% in group B (p=0.024) [7]. Olesen MS et al revealed that women with three or more previous implantation failures had a significant increase in clinical pregnancy rate (31.1% vs. 53.6%; relative risk = 1.72; confidence interval [1.05–2.83]) after scratching [8].

Günther Vn et al reviewed the role of scratching in IVF and found that it is less beneficial in unselected sub-fertile women but scratching appears to be successful in women with repeated implantation failure. Scratching is convenient, easy to perform, and associated with very little pain. So, scratching can be offered to patients with recurrent implantation failure in order to try to enhance pregnancy and live birth rates after informing about the heterogeneous data of results [9]. Lensen S et al conducted a pragmatic, multicenter, open-label, rando-mized, controlled trial on 1364 women who were under-going IVF in next cycle and showed no significant between-group differences in the rates of ongoing preg-nancy, clinical pregnancy, multiple pregnancy, ectopic pregnancy, or miscarriage and concluded that scratching does not result in a higher rate of live birth than no intervention among women undergoing IVF [10]. Van Hoogenhuijze NE et al did meta-analysis of fourteen RCTs involving 2537 participants concluded that it remained unclear that endometrial scratching improves the chance of pregnancy. So, it should not be offered in daily practice and large and well-designed RCTs and an individual patient data analysis should be available for further assessment [11]. Moustafa S et al also reviewed the role of scratching in implantation failure and stated that it can be a part of diagnostic evaluation with hysteroscopy or endometrial biopsy but as therapeutic tool more RCTs are needed [12].