4Academy of Medical Sciences of the Serbian Medical Society, Serbia

Membranoproliferative glomerulonephritis (MPGN) is characterized by mesangial cell proliferation and structural changes in glomerular capillary walls and double-contoured glomerular basement membrane (GBM). Usually, it is connected with cryoglobulinemia which is defined by the presence of a circulating, a cold-precipitating immunoglobulin. The chemical and immunological features of the cryoglobulins are used to define three types of cryoglobulinemia. In this report we describe the third case of MPGN type II with essential cryoglobulinemia without HCV infection, which is usually defined in the literature as MPGN type II. Here, we present 61-years old woman previously diagnosed with MPGN in 2012 at another institution. At that time, she was not examined in terms of cryoglobulinemia. Initially she was treated with pulses of methylprednisolone, then oral corticosteroids until cessation when complete remission was achieved. Meanwhile, she had two relapses of the disease. In October 2020 we re-evaluated her and found out positive cryoglobulins in repeating testing. Serological studies for anti-neutrophil cytoplasmic antibodies (ANCA), myeloperoxidase and proteinase 3, anti-double stranded DNA antibodies, anti-hepatitis C antibodies, anti-HIV antibodies and anti-hepatitis B surface antibodies were all negative. Serum M protein or monoclonal IgM were not detected. Percutaneous renal biopsy was compatible with the diagnosis of MPGN. Based on clinical, laboratory and histological evaluation, it was concluded that the patient had a MPGN with essential cryoglobulinemia. Therapy with mycophenolate mofetil had a beneficial effect on the course of disease and the patient achieved partial remission and stabile renal function for the last 3 months of follow-up. Since the therapy for MPGN with essential cryoglobulinemia is not standardized, further research in the field is needed.

In this report, we describe the third case of MPGN type II with essential cryoglobulinemia without HCV infection which is usually defined in the literature as MPGN type II.

A 61-year old woman was hospitalized at our department in November 2020. for reevaluation and second renal biopsy. She was previously diagnosed with MPGN in 2012 at another institution when clinical manifestation of disease included nephrotic proteinuria and hematuria without renal failure (proteinuria 5g/24h, urine: 15-20 red blood cells/high-power field). At that time, the patient was not examined in terms of cryoglobulinemia. Initially she was treated with pulses of methylprednisolone, then oral corticosteroids in a dose of 40mg until cessation when complete remission was achieved. In October 2017, immunosuppressive therapy (cyclophosphamide and prednisone) was reintroduced due to disease relapse (proteinuria 6g/24h, creatinine 162umol/L), until complete remission was achieved in October 2018. Thereafter, she continued with small doses of corticosteroids until September 2019, when she stopped therapy. She suffered from hypertension and hypothyroidism-both well regulated with medications.

Percutaneous renal biopsy was performed, and pathohistological analysis revealed: out of 6 glomeruli, one was completely sclerotic, but in others the lobulation was emphasized with a pronounced thickening of GBM which in some segments has a duplicated appearance. Mesangial segmental proliferation was present as well as rare mononuclear cells with altered surrounding interstitium. Groups of atrophic tubules with edematously altered interstitium and permeated mononuclear infiltrate in one part formed a larger aggregate. Blood vessels experienced wall thickening. Immunofluorescence microscopy: IgA-, IgG+, IgM-/+, C1q+, C3+-C3++ staining in all specimens. The finding was compatible with the diagnosis of MPGN (see Figure 1). 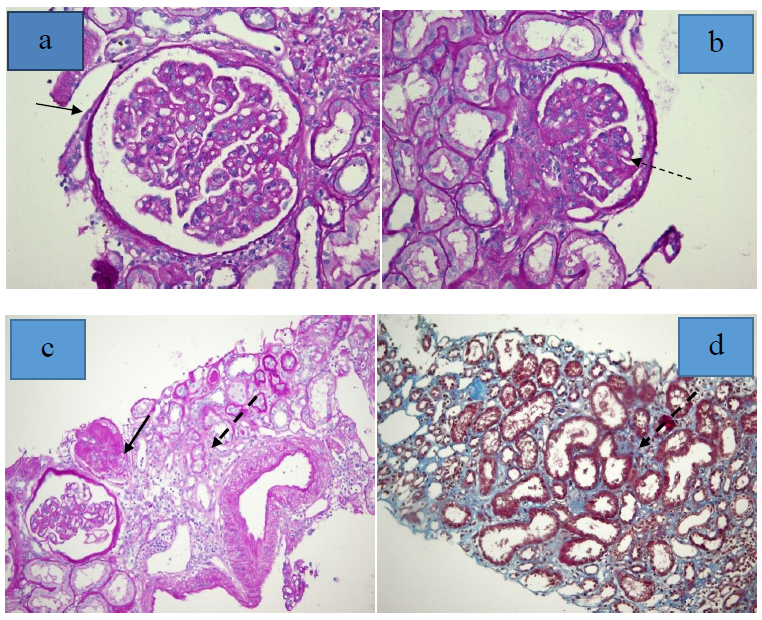 Based on clinical, laboratory and histological evaluation, it was concluded that the patient had a MPGN with essential cryoglobulinemia. Since she had previously been treated with cyclophosphamide and prednisone, we commenced treatment with mycophenolate mofetil (2g/24h) divided into two doses. This therapy had a beneficial effect on the course of disease and the patient achieved partial remission and stabile renal function for the last 3 months of follow-up.

There are not many cases of essential mixed II cryoglobulinemia and MPGN described in the literature, especially in the absence of hepatitis C virus infection. Namely, in available literature we found only two cases: Taiwanese authors presented female patient of the same age and with very similar clinical presentation as our patient, but they confirmed cryoglobulinemia-monoclonal gammapathy afterward. Male patient presented by Indian authors was younger (34 years) and his laboratory findings have shown significantly higher levels of urea and creatinine, while urine analysis was very similar to that of our patient.

Initially, our patient was treated in another institution when she was diagnosed as MPGN but cryoglobulinemia was not considered at that time. Crioglobulinemia was diagnosed after eight years, in October 2020, at our institution. In November 2020 the presence of cryoglobulins was confirmed for the second time and a re-biopsy was performed. Serum cryoglobulin testing involves a manual qualitative method. The test is based on the properties of cryoglobulins to group and precipitate in the cold, but dissolve at the high temperature. Negative results should be checked in 7 days. If cryoglobulins are present, additional testing is required that involves characterization and typing of the cryoglobulins. According to this, we repeated the test twice (both time positive), but more precise analysis of cryoglobulins was not available at that time. Still, considering the clinical presentation of disease, associated glomerulonephritis, typical histological finding, and absence any relevant ethiological factor linked to cryoglobulinaemia, we characterized her to have most likely essential cryoglobulinemia. In the further follow up of our patient, we should think about finding specific cause of cryoglobulinemia.

Apart from renal involvement, no other manifestation of EC was present. MPGN is the most frequent histologic finding in patients with essential cryoglobulinemia with subendothelial deposits. On immunofluorescence, deposits of immunoglobulin and complement are always present [8]. Immunofluorescence shows subendothelial and mesangial deposits of IgM, IgG, C3 and frequently C1q [8] like in our patient. Renal disease at presentation of cryoglobulinemia is apparent in less than 25% of patients, but develops in about 50% over time [8]. More than a half has proteinuria and/or hematuria. Nephrotic syndrome is diagnosed in 20% of patients and acute nephritic syndrome in 20% [7]. In our patient the disease was manifested by mild renal insufficiency with subnephrotic proteinuria. No standard treatment for essential cryoglobulinemia associated with MPGN treatment was suggested and decisions should be made purely on the basis of clinical experience. Acute nephritic and/or severe vasculitis flare-ups may be treated with high-dose of intravenous steroid pulses followed by a short-term course of oral prednisolone and cytotoxic drugs [8]. Patients who develop progressive renal disease are candidates for dialysis or transplantation. This patient had three partial remissions and last one was achieved by the protocol with mycophenolate mofetil. Still, we need longer follow-up period to establish the effect of such therapy and the course of disease. Since the therapy for MPGN with essential cryoglobulinemia is not standardized, further research in the field is needed.