Questioning the Axiom: Is Hyperflexed Scaphoid a Common Occurrence in South Indian Population? - An Observational Study

Background: Scapholunate Angle SLA greater than 80° is one of the indicators of surgery for carpal instability. The normal SLA is between 30-60°. This is based on studies which were conducted several decades ago in the western part of the world. The SLA of Indian population has never been measured before. The knowledge of normal SLA in each population becomes imperative because it lays down the guidelines for surgical and non-surgical management of wrist fractures and instability in that population. In this study, we aim to measure the SLAs in asymptomatic volunteers of South Indian origin and compare the results with existing data.

Methods: An observational study was done in a tertiary care hospital in South India. Lateral radiographs of the wrist of asymptomatic volunteers were taken. The SLA was measured using software in the PACS system. The relation of SLA to gender, age, left and right sides and handedness was compared. These were compared to pre-existing global data available on SLAs.

Results: The SLA of 202 radiographs with 47 males and 54 females were studied.
• The average SLA was 51.33° and the range was between 29° and 74°.
• The average SLA of males was 51.8° and females 50.8°. There was no significant difference between the two.
• Similarly, there was no significant difference between the SLA of right and left sides in right handed and left handed subgroups.
• However, there was an increasing trend in SLA among females with age. But no similar pattern was seen among males.
• Interestingly, 39 out of the 202 radiographs (19.3%) had a SLA above 60°.

Conclusion: This study suggests the normal SLA in South Indians may be higher than the previously established reference values. This study serves as a pilot project and a reference for further studies on SLA.

Anthropometry is the measurement of living human individuals to understand the range of normal human physical variation [1]. To achieve accurate sex and age determination of normal values, every population should have its specific measurements [2]. The normal ranges of wrist measurements vary with race and ethnicity. The scapholunate angle plays an important role in the decision making of management of certain carpal bone and scapholunate ligament injuries [3]. With perilunate, wrist and hand injuries accounting for nearly 28% of all injuries [7], it is interesting to know what is the normal range in different ethnic groups.

The present study is the first to measure the Scapholunate Angles (SLA) of healthy South Indian population. The normal range of Scapholunate Angle (SLA) is between 30-60° [4-6]. This is based on studies which were conducted several decades ago in the western part of the world. The SLA of Indian population has never been measured before. The knowledge of normal SLA in each population becomes imperative because it lays down the guidelines for surgical and non-surgical management of wrist fractures and instability in that population. In this study, we aim to measure the SLAs in asymptomatic volunteers of South Indian origin and compare the results with existing data.

A descriptive observational study was conducted in a tertiary care centre in South India between January 2021 and July 2021. The aim was to measure the SLA in a normal, asymptomatic South Indian population and analyse any correlation with age, gender, between right and the left sides and handedness. Statistical analysis using average, standard deviation and range, significance of correlation of SLA with the different variables were calculated using the null hypothesis. Institutional ethical clearance was obtained before starting the study (CSP-MED /21/SEP/71/129). Inclusion criteria were patients above 20 years but less than 60 years with no specific complaints in upper limb, who were clinically normal and healthy volunteers. Exclusion criteria included children (in whom fusion of epiphysis is not yet complete), patients with acute or chronic wrist pain, recent or previous injury to the wrist, hand or forearm. Congenital conditions affecting the hand or wrist bones, infections and tumours of the hand and those with associated systemic condition causing hypercalcaemia or hypocalcaemia were also excluded from the study. Standard lateral radiographs of both wrists were taken.

The scapholunate angle was measured using the software in PACS. These lateral radiographs were taken in standard Zero position with the arm adducted against the trunk, the elbow flexed 90° with the forearm in neutral rotation (no supination or pronation), and the wrist in neutral position (no radial or ulnar deviation, and no flexion or extension) [7]. We attained this using a below elbow thermoplastic splint as shown in Figure 1. It is similar to the Meyrueis’ technique, where a wooden board was used to maintain the forearm in a strict lateral position [8]. Rotational malalignment alters carpal bone measurements and by using this easy technique we attained the neutral wrist position [9]. Scapholunate angle was measured using the software in our PACS (Figure 2). 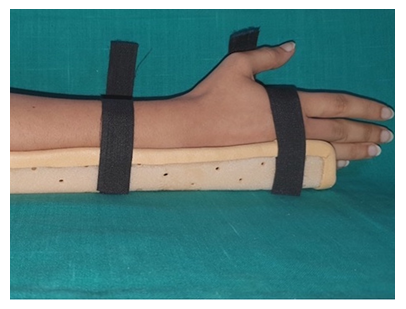 Figure 1: Thermoplastic splint aiding in keeping the wrist in neutral position during the radiograph. 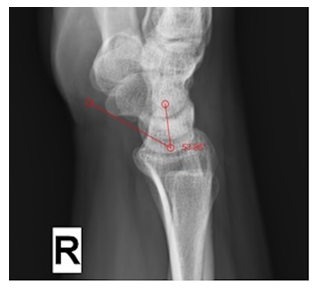 Figure 2: Scapholunate Angle (SLA) subtended between the longitudinal lunate axis and the axis of the scaphoid attained by the tangential method.

The mean SLA of the 202 lateral radiographs was 51.3° with a standard deviation of 8.87°, ranging between 29° to 74° degrees. The average SLA of female was 51.8° and males 50.8° (Table 1). There was no significant difference between the two as indicated by the p-value. There was an increasing trend in the average SLA with age (Table 2). 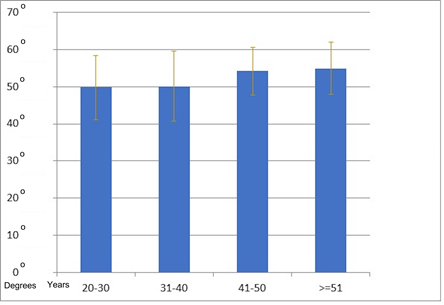 Table 3:  Comparison of Scapholunate Angle (SLA) with other age groups.

3.1 Variations among sides and dominance:

101 sets of right and left sided wrist radiographs were compared without taking gender or handedness into consideration. When SLA was compared, gender difference was not statistically significant (Table 4). Similarly, on comparing the handedness, there was no significant difference of SLA between dominant and non-dominant hands (Table 5).

Table 4: Difference of Scapholunate Angle (SLA) between Right and Left side.

The scapholunate angle reflects the condition of scapholunate junction and is used to evaluate carpal bone alignment lateral radiographs [10]. On comparing the data of this study with other international literature available, the mean and range of SLA was in concurrence with study by Sarrafin et al [10], Larsen et al. [7], Jafari et al. [11]. But the range was much narrower in the data by Linsheid et al. [4], Schuid et al. [12] and Tang et al. when compared to our study (Table 6).

Table 7: Comparison of Scapholunate Angle (SLA) in genders among the different studies.

On comparing the SLA with age, there was no significance association in the study by Schuind et al. [12] and Jafari et al. [11], with the present study (Table 9). But an incidental finding in this study was that in case of females, the older women (>40years) had a significantly wider SLA than younger women (20-30years). This was not the same case with men. Another finding in this study was that 39 out of the 202 (19%) radiographs had SLA more than 60° which is considered as the normal upper limit which ranged from 61° to 74°. All of the 39 subjects were asymptomatic and none of them had an increased scapholunate gap. These interesting observations need further research and evaluation. It is beyond the scope of this paper to explore the reason behind it, but it definitely sparks a question of possibility if it is a common occurrence in many populations which has been missed so long.

5. Limitation of the Study

Further research on Scapholunate Angle (SLA) is needed in many parts of the world to establish a wide consensus. The follow-up of the individuals especially those with a higher SLA might prove useful, to observe if they are more prone to Scaphotrapeziotrapizoidal (STT) arthritis in the later part of their lives. The significant increase of the SLA in female with age might also be a normal occurrence which has been unnoticed. But again, this needs to be addressed and confirmed with a multicentric study.

This research paper serves as a pilot study and as a reference for further studies on SLA angle in Indians. Though it is in concurrence with the previous articles on SLA pertaining to range, average and relation to age sex and handedness, it points out that further research and multicentric studies might be needed to redefine the normal range of SLA. The association of higher SLA with STT arthritis and the significant increase in SLA with age in women require long term cohort studies. The study might also influence designing of implants of carpal bones in the future.

The authors declare no conflicts of interest regarding the publication of this paper.

This research did not receive any specific grant from funding agencies in the public, commercial or not-for-profit sectors. Written informed consent was obtained from all the volunteers of this study. None of their identities were revealed in the study

This study was approved by the Institutional Ethics Committee (CSP-MED /21/SEP/71/129).