Ying Zhang and Fangfang Dou contributed equally to this work

Background: Quercetin and its derivatives are the most widely distributed flavonoids, which have many pharmacological activities, such as anti-oxidation, anti-aging and anti-inflammatory, Quercetin inhibits the occurrence of atherosclerosis (AS) due to its antioxidant activity, but the mechanism is unknown.

Quercetin and its derivatives are the most widely distributed flavonoids found in all plant, which is widely distributed in plant flowers, leaves and fruits, it is also the most important bioflavonoid in the human diet. Recent studies found that quercetin have many pharmacological activities, such as anti-oxidation, anti-inflammatory, anti-hypertensive, anti-platelet aggregation, anti-cancer, anti-aging, anti-mutation and anti-AS. Some research indicated that the role of anti-aging, anti-mutation and anti-AS of quercetin were all related to the antioxidant effect [7, 8]. It has been reported quercetin could reduce the hydrogen peroxide content of normal human neutrophil, its antioxidant activity was related to the number of hydroxyl [9]. Quercetin can also prevent daunomycin-induced oxidative damage in rat myocardial mitochondria, decrease the secretion of adenylate cyclase and glutathione reductase which induced by daunomycin, at the same time, quercetin can prevent the decline of glutathione peroxidase [10]. Therefore, we observed whether quercetin inhibits plaque formation by protecting endothelial cells in in vivo and in vitro models of AS.

60 ApoE-/- C57BL/6 mice were randomly divided into 4 groups of 15 mice each. Mice of control group were fed with normal feed, and the remaining mice are all fed with high-fat diet (normal mouse feed +21% lard +0.15% cholesterol) (SLAC, China) for 12 weeks. 100 μg/ml quercetin was dissolved in DMSO, on the day of AS model preparation, 100 μg/ml quercetin and 400 μg/ml α-tocopherol were intragastrically administered to mice everday. The mice in the control group and the model group were given the same dose of sterilized double distilled water for gastric gavage for 12 weeks respectively.

2.2 HE staining and endothelial cell immunofluorescence in left ventricular outflow tract of mouse

Paraffin sections of the left ventricular outflow tract were made from 4% paraformaldehyde-perfused mice. After deparaffinization and antigen retrieval of the sections, the blocking solution was blocked at room temperature for 30 minutes, mouse CD31 antibody (Abcam, USA) was diluted with primary antibody dilutions (Beyotime, China) and incubated overnight at 4°C, the goat anti-mouse 546 fluorescent secondary antibody (Beyotime, China) was incubated for 1 hour at 37°C after sections were washing with PBS for 3 times at room temperature, finally, the tissue was covered with a DAPI dye-containing sealing agent (Beyotime, China). After dewaxing and antigen retrieval, tissue sections were also stained with hematoxylin and eosin (Beyotime, China), and the morphology and number of endothelial cells were observed under a fluorescence microscope.

HUVECs were purchased from Beijing Qinyuanhao Biological Technology Co., Ltd (Beijing China). HUVECs were cultured in 10 cm dishes with EBM-2 (Lonza, USA) at 37°C in a humid 5% CO2 atmosphere, the culture medium was replaced every other day and cells were passaged when cells density was more than 90%. In order to observe the hydrogen peroxide (H2O2) damage and the protective effect of quercetin to HUVECs, we seeded HUVECs in 6-well dishes, 10 μM quercetin or 200 μM α-tocopherol was added into the culture system after 24 hours, and then cells were exposed to 100 μM H2O2 for 4 hours to detect HUVEC injury and related markers.

2.4 Examine the level of EPCR, TM, vWF in peripheral blood of AS model

EPCR (Yanke, China), TM (R&D, USA), vWF (Abcam, USA) and ICAM-1 (Abcam, USA) were detected by corresponding Elisa kits, detailed experimental steps refer to the corresponding operation manual. Briefly, the obtained fresh mouse blood was stored in a heparin-containing anticoagulant tube, the upper serum was aspirated after centrifugation at 12000 rpm at 4°C for 20 minutes, and serum can be stored at -80°C for assay at the end of reaction. Dilute serum samples into sample diluent NS according to the different concentration, and the final absorbance at 450 were measured by microplate reader, the final concentration of the sample is calculated based on absorbance and standard concentration.

The culture medium of H2O2-treated HUVECs was removed and washed once with phosphate buffered solution (PBS) (Gibco, USA). Cells were fixed with 4% paraformaldehyde for 30 minutes at room temperature, after paraformaldehyde was removed and washed twice with PBS, PBS containing 0.3% Triton X-100 was added and incubated for 5 minutes at room temperature. Prepared TUNEL test solution was added and cells were incubated at 37ºC for 60 minutes in the dark. After two washes in PBS, the cell staining was observed under a fluorescence microscope.

2.6 Chemokine and inflammatory factor level in mouse and cell model

We detected the chemokine level of CXCL1, CXCL8, CXCL4 and CXCL10 in the atherosclerotic mouse model and cell model, the elisa kits of chemokines all purchased from Abcam company. Inflammatory factor including tumor necrosis factor-α (TNF-α), interleukin 1β (IL-1β), IL-6 and IL-12 of aorta were detected by corresponding Elisa kits (R&D, USA). Detailed experimental method also reference to protocol booklets, serum of AS mouse or supernatant of HUVECs were collected, aorta tissue was cut into small pieces by eye scissors, then put the tissue in saline for homogenization and sonicate, collected sample can be stored at -80°C for assay at the end of reaction. The final concentration of the sample was measured at 450 nm.

Transwell assay of Raw264.7 cells (Chinese Academy of Sciences Cell Bank, Shanghai, China) was measured using a transwell chamber with 6.5 mm polycarbonate membrane (8 μm pore size) (Cornning, NY, USA). Normal Raw264.7 (2 × 104 cells/well) cells plated on the upper chamber, HUVECs (5 × 104 cells/well) with fresh medium containing 100 μM H2O2 or 100 μg/ml quercetin and 400 μg/ml α-tocopherol plus H2O2 plated on the lower chamber. The Raw264.7 cells were loaded at to the upper chambers and allowed to migrate for 24 hr at 37°C. Then the cells were fixed with 4% paraformaldehyde for 10 minutes before washed with PBS for 3 times,  migrated Raw264.7 cells were stained with crystal violet for 1 hour at 37°C, non-migrating cells on the upper surface of the membrane were removed using a cotton swab. The migrated Raw264.7 cells were counted under the microscopy (CX43 Biological Microscope, Olympus, Japan). Lastly, we calculated the average of 10 fields in each group and compared differences between groups.

Statistical analysis was performed with SPSS 17.0 software (SPSS Inc., Chicago, USA). Data are presented as mean ± SD of five independent experiments. Student’s t-test for unpaired variable was used to determine statistical significance of differences between groups, and a P-value less than 0.05 was considered statistically significant.

In order to detect the protective ability of quercetin on HUVECs with H2O2 injury, we examined the inhibition ability of quercetin on endothelial cell apoptosis, annexin V and propidium iodide (PI) staining was used to observe the number of apoptosis cells (Figure 2A). Then, we separately counted the number of annexin V positive cells with PI negative cells and annexin V / PI double positive cells, we found that H2O2 promoted early apoptosis of HUVECs which were stained by annexin V only, quercetin reduced the number of early apoptotic cells; similarly, quercetin also reduced annexin V / PI double positive staining of late apoptotic cells (Figure 2B). Therefore, we hypothesize that quercetin protects vascular endothelial cells by inhibiting apoptosis of HUVECs.

3.3 Regulatory effect of quercetin on chemokine secretion of HUVECs

After clarifying that quercetin inhibits apoptosis of HUVECs, we examined the effect of quercetin on the secretion of chemokines. Different types of chemokines play different funcitons on regulating the formation of blood vessels of vascular endothelial cells. We examined the chemokines CXCL (Chemokine (C-X-C motif) ligand) 1 and CXCL8 that promote angiogenesis, as well as the chemokines CXCL4 and CXCL10 that inhibit angiogenesis, our results showed that the levels of CXCL1 and CXCL8 in the serum of the model group were significant lower than those of the control group, and the levels of CXCL4 and CXCL10 were significantly increased contrast to the control group. Compared with the model group, quercetin significantly promoted the serum levels Of CXCL1 and CXCL8 and inhibited the serum levels of CXCL4 and CXCL10 (Figure 3A). We also got the same conclusion in HUVECs cultured in vitro (Figure 3B). These results indicate that quercetin protects vascular endothelial cells and promotes angiogenesis. Since vascular endothelial cells are the first line of defense to protect blood vessels from damage, protecting vascular endothelial cells plays an important role in preventing atherosclerosis.

3.4 Quercetin reduces the recruitment of macrophages by vascular endothelial cells

Based on the above findings, we would further confirmed that quercetin have the effect of preventing atherosclerotic plaque formation. At the first, we used Transwell assay to observe the chemotaxis of HUVECs to macrophages, we found that when HUVECs were administered with hydrogen peroxide damage, a large number of macrophages were induced to migrate to HUVECs, while quercetin plus hydrogen peroxide were both added to the supernatant of HUVECs, the number of macrophages chemotaxis to HUVECs was greatly reduced (Figure 4A). The above results indicate that the damage can promote the migration of a large number of macrophages to endothelial cells, thereby promoting the formation of atherosclerotic plaques. Quercetin delays the migration of macrophages by inhibiting endothelial cell damage, thus delaying atherosclerosis formation. Macrophages that migrate to the injury site release a large amount of inflammatory factors, exacerbating inflammatory response. Accordingly, we detected the inflammatory cytokines levels of aorta tissue and cultured HUVECs, the level of TNF-α, IL-1β, IL-6 and IL-12 were all increased in ApoE-/- mice with high-fat diet (Figure 4B) or HUVECs stimulated by hydrogen peroxide (Figure 4C), and quercetin similarly inhibited the expression of inflammatory cytokine. The above results showed that quercetin could protect vascular endothelial cells by inhibiting apoptosis and inflammatory response, and these results also indicated that quercetin further protected endothelial cells from atherosclerotic plaque by protecting vascular endothelial cells, reducing chemokine release, and inhibiting macrophage migration. 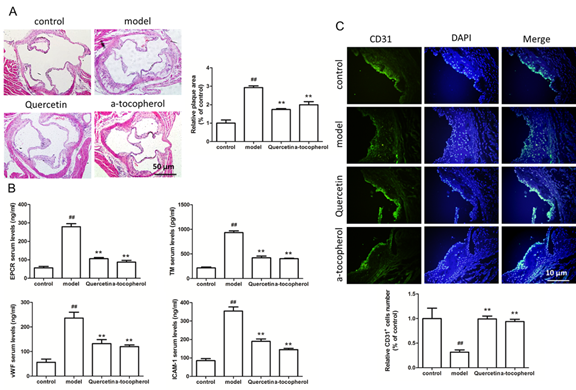 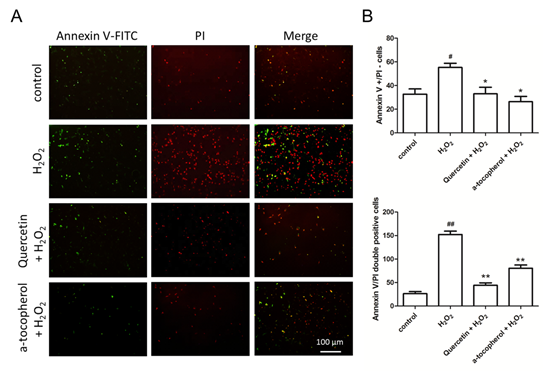 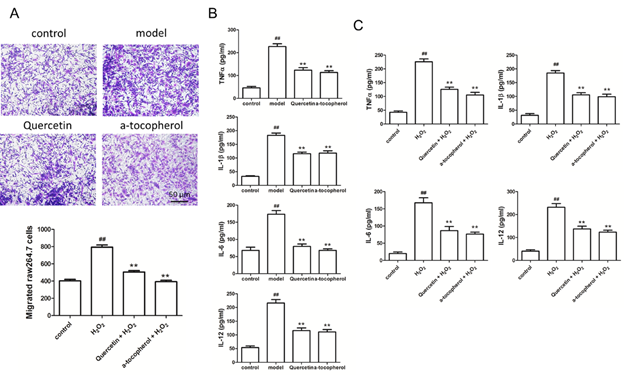 Figure 5: Effect of quercetin on the expression of apoptosis and inflammatory regulatory protein. (A) Real-time PCR examins the level of Bax, Bcl2, IκBα and p65 at mRNA level; (B) Western blot detects the expression of Bax, Bcl2, phosphorylated IκBα and phosphorylated p65 at protein level. Data represent the mean ± SD from 5 independent experiments (#, * p<0.05, ##, ** p<0.01, #: vs control, *: vs model).

Endothelial cell injury is the initiating factor of atherosclerotic lesions. Studies confirm that there is endothelial dysfunction in the subclinical stage of atherosclerosis [11]. Therefore, inhibition of endothelial cell injury, or protection of damaged endothelial cells is of great importance for the delay of the occurrence and development of AS. Quercetin is widely found in vegetables, fruits and botanicals, such as onion, honey and wine, and quercetin is easy to extract, separate and detect. In recent years, the research of quercetin is increasing in domestic and foreign pharmaceutical region. It was found that quercetin have many pharmacological activities, including anti-oxidation, anti-inflammatory, lowering blood pressure, anti-platelet aggregation, anti-cancer, anti-aging, anti-mutation and anti-atherosclerosis [12, 13]. Therefore, we firstly observed whether quercetin could inhibite the formation of atherosclerotic plaque, and whether the role of preventing atherosclerosis of quercetin was realized by protecting vascular endothelial cells. Since quercetin has antioxidant function in vascular endothelial cells, we continued to investigate whether quercetin inhibited apoptosis of HUVECs, results showed that quercetin does reduce the number of apoptotic cells in HUVECs induced by H2O2. Some studies have found that quercetin can effectively improve mouse experimental colitis through anti-inflammatory and anti-oxidation mechanisms [14]. Studies have shown that quercetin improved tunicamycin-induced endoplasmic reticulum stress by regulating the stress response genes glucose regulated protein 78 (GRP78) and C / EBP homologous protein (CHOP) [15]. Therefore, quercetin could inhibit oxidative stress in different ways and protect cells from damage.