Material and methods: This hospital based cross-sectional study assessed adults aged 18 years and above who attended public dental clinics in Dar-es-salaam, Tanzania. Prevalence of DH was clinically assessed in relation to age, sex, tooth type, presence of tooth wear (TW) and gingival recession (GR). Analysis of data used the SPSS program with level of statistical significance set at p<0.05.

Conclusion: This study demonstrates that prevalence of clinically diagnosed DH among subjects was common (46.4%) with first molars in lower jaw being most affected (63.5%). DH had a statistically significant increase with age, tooth wear and gingival recession however, logistic regression indicated that those without tooth wear or gingival recession were less likely to have DH.

Dentin hypersensitivity (DH) [1] also known as dentine sensitivity [2] or cervical sensitivity/hypersensitivity [3] is characterized by “pain derived from exposed dentin in response to chemical, thermal tactile or osmotic stimuli which cannot be explained as arising from any other dental defect or disease”[4].  It has been demonstrated as a common problem in clinical dentistry [5, 6] and is likely to become more frequent in the future because of expected increases in longevity of the natural dentition  [7]. Worldwide  prevalence of DH reported was 1.34%  in Nigeria [8] 11% in Kenya [9], 52.6%. in Saudi Arabia [10] and 67.7% in Hong Kong [11]. An even higher prevalence of 72-98% was reported among patients attending specialist periodontology departments [12, 13]. DH can affect

patients of any age and while some studies report that most affected patients are in the age group of 20-50 years, with a peak between 30 and 40 years of age [14] other studies report a first peak in 20 to 30 year olds and then another peak later in the 50s [15, 16]. Although the general consensus is that DH tends to be commoner among females [14] few studies [8, 17] report a higher prevalence among males and some studies report no gender difference [18].  Furthermore, DH has been linked with tooth wear [9, 19] and gingival recession [20, 21] and common tooth type reportedly affected by DH are premolars and canines [15, 16] with molars being least affected  [6, 22].  Considering that DH is a diagnosis of exclusion [23] and the effected person is required to report the pain, omission of any reference to that person encourages the mistaken belief that the diagnosis of DH is objective [7]. Most of the reported studies on DH have been carried out using a patient questionnaire with no subsequent clinical examination [24]. However, clinical investigations of dentin hypersensitivity is claimed to be subjective as it depends on the individual reaction of the examined patients to different stimuli [25].  Information on the prevalence of clinically assessed DH is necessary for comparative studies worldwide and for recommending and planning of appropriate diagnosis and treatment modalities within the country.

This hospital based cross sectional study was conducted in Dar-es-salaam, one of the highly populated  cities of Tanzania with a population of 3.207 million  people from all over the country [26]. One public hospital in each district (Kinondoni, Temeke and Ilala) and the only consultant referral hospital in the region were purposively selected based on the number of attending patients. The estimated sample size of 384 was calculated using a 50% proportion (p) of dentine hypersensitivity with a 95% confidence interval of 1.96 and margin of error of 5% (0.05).  Based on the attending patient population at each hospital, proportion of participants at each selected hospital was determined.

At each facility, the study was introduced to patients awaiting dental treatment on a daily basis and a total of 345 participants aged 18 years and above who consented and fulfilled the inclusion criteria were recruited into the study. Those excluded from the study were the very ill, mentally challenged, on anti-inflammatory or analgesics prescriptions or desensitizing therapy, with dental caries or tooth/root fracture, having filled or root canal treated tooth/teeth, or with fixed or removable prosthesis or orthodontic appliances. The clinical assessment of DH was conducted by seating subjects in a dental chair having an overhead light. Prior to determining presence or absence of DH using the tactile stimulus response [27] all tooth surfaces were gentle dried with cotton gauze by one of the authors who was calibrated (AAM).  The tactile stimulus test using a World Health Organization probe was performed on all permanent teeth except third molars by using an initial low scrubbing force (equivalent to 5 gram force) followed by gradual escalation to the threshold level (not exceeding 20 gram force). Respondents were instructed to describe the extent of the pain/discomfort experienced while probing by using a five numerical verbal rating scale (VRS) from 0 to 4. Zero signified no discomfort/pain while mild discomfort/pain =1, moderate discomforts/pain= 2, severe pain only during application of stimulus= 3 and severe pain persisting after removal of stimulus=4. Patient’s responses for each tooth were recorded in the clinical record form and those who scored zero (0) for all teeth were considered as not having DH while those who scored 1 to 4 for any tooth were considered to have DH. TW was scored (0=no tooth wear; 1= tooth wear) when either attrition, abrasion, abfraction or erosion were observed [28] while GR was diagnosed when there was apical migration of the gingival attachment with any amount of root exposure (0=no gingival recession; 1= gingival recession). Age was grouped into 18-33 years =0 and 34-72 years =1 while sex was grouped as males =0 and females = 1. Validity of clinical assessment of DH, TW and GR was done at the Muhimbili University dental clinic and intra examiners consistency was assessed by requesting 10% of randomly selected subjects to repeat the clinical examination. Measures of agreement of the various scores ranged from Kappa 0.705 to 0.934.  Analysis of data was performed using SPSS version 20. Frequency distribution and bivariate analysis was done and results with p-value of less than or equal to 0.05 was considered statistically significant. Multivariate analysis was performed to take care of the confounding factors of DH.  Ethical clearance to conduct this study was granted by Muhimbili University of Health and Allied Sciences (Ref.No.MU/PGS/SAEC/Vol.VI/) while permission to conduct the research in respective dental clinics was obtained from the administrative authorities. Signed consent forms by participants ensured understanding of the study and right to participate. 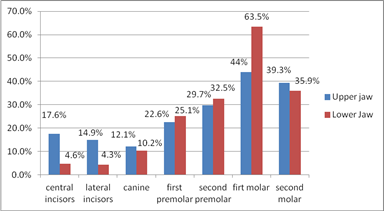 This hospital-based cross-sectional study aimed to provide base line data on the prevalence of DH among adult dental patients aged 18-72 years in Dar-es-salaam, Tanzania in relation to age, sex, tooth type, presence of tooth wear (TW) and gingival recession (GR). Purposeful selection of hospitals was based on accessibility of the residents from different localities and served as a representation of participants from all over the country. Obtained baseline data on the magnitude of DH cannot be generalized as it involves patients presenting to dental clinics within the country and provides basis for comparative studies worldwide. Clinicians however are made aware of the prevalence of DH and its relationship to age, sex, tooth type, presence of tooth wear (TW) and gingival recession (GR). Clinically diagnosed  prevalence of DH of 46.4% in this study was similar to the reported 42.4% in Saudi Arabia [10] and was within the prevalence range of 3% to 57% reported in other studies [29, 30]. Contrastingly, a higher prevalence of 68% was reported among patients attending a dental hospital in Hong Kong [11] and an even higher prevalence of 72-98% was reported among patients attending specialist periodontology departments [13, 12]. Differences in the reported findings could be related to patient selection and diagnostic methodology employed. In accordance with most studies [31-33], prevalence of clinically diagnosed DH was reported to be statistically significantly higher in the older age group of 31-72 years. In disagreement, some studies report a first peak of DH in 20 to 30 year [15, 16] while another study reported that DH can affect patients of any age [14]. The difference in reported findings could be related to the categorization of age groups, and further studies are needed to determine the possible cumulative effect of DH with age. The general consensus is that DH tends to be commoner among females [34] however, Bamise et al. [8] reported a male predominance in clinically diagnosed DH. Similar to findings from this study, other studies [18, 35] also found no statistical significant difference in the prevalence of DH among males or females. The possible reason for the lack of gender difference in this study could be related to similarities by both males and females in dietary and oral hygiene practices. Participants clinically diagnosed with DH in this study had statistically significantly more TW and GR in comparison to their counterparts. Similar significant associations were reported by West et al. [18]. Inadequate level of knowledge and practices on oral health that cause enamel or cementum loss and gingival recession could explain the reported differences. Most studies agree that DH is common in premolars and canines [29, 36] and that molars are least affected  [6, 22]. Contrastingly this study found that molars were more affected by DH.  While in Hong Kong lower incisors were the most commonly affected teeth [11] this study found lower incisors least affected by DH. Prevalence of affected teeth by DH in this study can be explained by the consumption of abrasive foods unlike in developed countries where most types of foods are processed. Studies have demonstrated that acidic foods and drinks can soften enamel leading to significant tooth wear, particularly when combined with mechanical cleaning [3] and in line with other studies [37] findings from this study report that persons without tooth wear are less likely to have DH. In addition, similar to findings of this study, another study [38] reported that participants without gingival recession are less likely to have DH.

This study demonstrates that prevalence of clinically diagnosed dentine hypersensitivity among subjects was common with first molars in lower jaw being most affected.  DH had a statistically significant increase with age, tooth wear and gingival recession however, logistic regression indicated that those without tooth wear or gingival recession were less likely to have DH.

Ministry of Health, Community Development, Gender, Elderly and Children, Muhimbili University of Health and Allied Sciences, authorities of the dental facilities and participants.

The authors declare that there is no conflict of interest regarding the publication of this paper.

No supplementary material has been provided.