Pneumatocele in a 33-Year-Old Ghanaian Woman: A Case Report

A 33-year-old female baker presented to our facility with a chronic cough of 7-month duration, difficulty in breathing, and tachypnea and had been on anti-tuberculous treatment for the past six months prior to her referral. A chest radiograph revealed huge thin-walled rounded hyper luscencies with smooth inner margins and without vascular markings and fluid in both upper zones subsequently diagnosed as bilateral pneumatoceles with mild compressive effects towards the left. Her condition was stable and subsequently improved after passage of chest tubes. The ability to differentiate pneumatoceles from other conditions like pneumothorax, giant bullae, and cavities is crucial since an error in diagnosis may affect the management ultimately.

Pneumatoceles are thin-walled air filled cystic lesions that develop within the lung parenchyma [1]. Most often, they occur as a sequela to acute pneumonia, commonly caused by staphylococcus aureus and other infectious bacteria such as streptococcus pneumonia and hemophilus influenza [2]. Pneumatoceles also occur from other noninfectious agents such as hydrocarbon ingestion, trauma and positive pressure ventilation [3]. Typically asymptomatic, pneumatoceles are generally observed soon after the development of pneumonia and may not require surgical intervention [4]. Because the lesion generally resolves spontaneously and patients rarely die during the acute illness, the precise pathogenesis and pathologic anatomy are in most instances uncertain [5]. In adults, this condition can be misdiagnosed as cavitating lung mass. Pneumatoceles are seen in all age groups but are often common in children and rare in adults [6].

We report a case of a 33-year-old female baker who presented at the chest clinic of the Cape Coast Teaching Hospital (CCTH) with a history of chronic cough of 7-month duration. The cough was unproductive but persistent and associated with chest pains and dyspnea. She did not have fever on examination. She was tachypneic with a respiratory rate of 24 breaths per minute with reduction in chest movements bilaterally. The trachea was shifted to the left. The percussion notes were hyper resonant worse on the right upper zone. Breath sounds were reduced bilaterally with lower zone crackles. Her temperature was 36.5 degrees Celsius, pulse-92beats per minute (bpm) and a blood pressure of 120/76 mmHg was recorded. Heart sounds were present and normal. The gastrointestinal system and musculoskeletal system were unremarkable. The patient had been on anti-tuberculous treatment for the past six months prior to her referral to CCTH. A provisional diagnosis of atypical pneumonia with pneumothorax was made for further investigation. The patient was asked to do a chest X-ray (CXR), erythrocyte sedimentation rate (ESR), sputum culture and full blood count (FBC). The ESR was markedly raised (204 mm per hour), sputum culture was negative and FBC showed leukocytosis with predominant lymphocytosis. The CXR revealed huge thin-walled rounded hyper luscencies with smooth inner margins and without vascular markings and fluid in both upper zones. The lung fields visualized in both middle zones showed diffuse reticulonodular shadows with a reduction in the lung volume on the left. The trachea was shifted to left. A radiological diagnosis of bilateral pneumatoceles with mild mediastinal shift to the left side secondary to tuberculosis was made (Figure 1). The patient was managed with continuation of the anti-tuberculous treatment and thoracotomy was done after admission at the chest ward. She was followed up till the respiratory rate became 13 breaths per minute. A repeat chest radiograph (CXR) showed significant improvement four weeks after admission. The cough and dyspnea improved markedly. She was discharged and enrolled into the chest clinic. She is currently well. 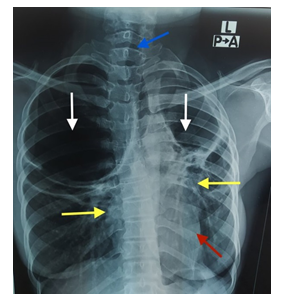 Figure 1: A PA chest radiograph of a female showing huge thin-walled rounded hyper luscencies with smooth inner margins and without vascular markings and fluid in both upper zones (Pneumatoceles) as shown by the white arrows. The trachea (blue arrow) and heart (red arrow) are displaced to the left. Both middle zones show diffuse reticulonodular shadows (yellow arrows) with a reduction in the lung volume on the left.

The formation of pneumatoceles has been advanced from three theories to better understand its mechanism but till date the exact mechanism in the formation of pneumatoceles remain unknown. One theory postulates that, the respiratory valve is obstructed and it caused by inflammatory exudate within the airway lumen leading to the distal dilatation of the bronchi and alveoli [7]. Another theory suggests that, the focal collection of air in the pleura dissects down the corridors to the pleura and forms pneumatoceles [8]. Finally, a third theory suggests that, after the initial drainage of the necrotic lung parenchyma, subsequent enlargement of the pneumatocele is caused by check-valve bronchiolar obstruction, resulting from a pressure from the adjacent pneumatocele or intraluminal inflammatory exudate [9]. The majority of pneumatoceles resolve spontaneously. In children, the development of tension pneumatocele commonly occurs as a result of severe complications of pneumococcal infection and bacterial pathogens like streptococcus pneumonia and staphylococcus aureus. Development of tension pneumatocele is rare in adults. Tension pneumatoceles can rupture and cause pneumothorax or bronchopleural fistula [10]. The clinical presentation may vary depending on the stage of the pneumonia. The symptoms are often initially subtle and nonspecific. The patient may be asymptomatic or present with some additional underlying pathology [11]. Pneumatoceles can be single but are more often multiple and size can vary from greater than 1 cm in diameter to occupying entire hemithorax, with walls less than 4 mm and are of uniform thickness. In a report by McGarry et al on pneumatocele formation in adult pneumonia, all three adults were severely ill and two expired [11]. Tension pneumatocele enlarges significantly compressing adjacent lung and mediastinum resulting in cardiovascular collapse. Our patient had multiple pneumatoceles and were confined at the upper zone and presented with chronic cough associated with chest pains and dyspnea. The diagnosis of pneumatoceles are usually done with the aid of CT scan and X ray examination but are rarely observed on initial chest radiographs. Between these two modalities, CT scan has a relatively high sensitivity in terms of early detection and differential diagnosis. Despite the low sensitivity of X-rays, they are still used as the first imaging modality [12]. Different forms of imaging guided treatment modalities such as the percutaneous drainage, tube drainage, compression, and catheter drainage have been described as the effective treatment modalities for single tension pneumatocele [13]. In our case, the patient was managed on her anti-tuberclous treatment and chest tube drainage was done at the chest ward successfully.

Different forms of pulmonary infections are encountered in everyday clinical practice and deciding on the most likely diagnosis may be challenging. Pneumatoceles can be confused with giant bullae, cavities, and pneumothorax and treatment of these conditions may vary, hence the ability to identify pneumatoceles which is rare in adults will prevent an error in diagnosis and treatment.

A written informed consent was obtained from the patient. The patient was assured of confidentiality and anonymity. Ethical clearance was not required for this study.

We are grateful to the 33-year-old woman for allowing us to report this case.

The authors have no conflict of interest to declare.

All authors contributed equally to the concept, design, data collection, drafting and revision of the manuscript before submission.

No funding secured for this study.