Phytochemical Screening and in vitro Antioxidant Evaluation of Ajuga iva

Oxidative stress was associated with several diseases. Many epidemiologic studies showed that antioxidant supplementation decreases the state of oxidative stress. The present work aims to study the in vitro antioxidant activity of different parts of Ajuga iva aqueous extract (AIE) simultaneously with a phytochemically analyze. The antioxidant activities of AIE were evaluated in terms of total antioxidant capacity evaluated by the phosphomolybdenum essay and the 2,2-diphenyl-1-picrylhydrazyl (DPPH) free radical method, as well as the ferric ion reducing power (FRP) and ferrous ion chelating (FIC) assays. All extracts showed a potent antioxidant activity and a powerful scavenging capacity in comparison with the ascorbic acid (AA) used as reference molecule. Importantly, Ajuga iva leaves exhibited the highest activity in comparison with stems and roots.

Antioxidant therapy has gained immense importance. Antioxidants are considered as a first line therapy that protect organisms from highly reactive free radicals, especially oxygen derived ones called ROS (Reactive Oxygen Species), which are capable of oxidizing biomolecules causing human diseases [1]. Electron acceptors, such as molecular oxygen, react rapidly with free radicals to become radicals themselves. A series of free radical-mediated chain reaction processes are also associated with lipid peroxidation, which leads to several types of biological damage [2]. Therefore, many investigations directed toward finding naturally occurring antioxidants of plant origin. The selection of natural products, such as plants used in ethno medicine, and the screening of their pharmacological activity may provide identification of newer drugs for the treatment of various diseases.

Ajuga iva (Ai) is one of the largest genera of the Lamiaceae family with 301 species all over the world [3].  Ajuga species are used in traditional medicine all over the world against some illness such as antitumor [4-6], neuroprotective effects [7], anti-inflammatory [8], antioxidant [9,10], psychotropic [11] , antidiabetic [12]  , antibacterial [13] analgesic [14], antioxidant [15,16], hypoglycemic [17] and vasorelaxant [18] activities among others biological effects. Ajuga genus contains many important bioactive compounds like anthocyanins, diterpenoids, sterols, ionones, iridoids, phenylethanol and flavonoid glycosides [19-21]. Even though, several bioactive compounds have been well studied on some Ajuga species, there is not enough data on their phytochemical and biological activities. To the best of our knowledge, although Ajuga species are well mentioned in the literature for their wide range of pharmacologic activities, Ajuga iva has been less evaluated. Therefore, we report in this study, the phytochemical analyze (phenolic contents, flavonoids and proanthocyanidins) and evaluate the in vitro antioxidant activity of the different AIE.

All reagents were purchased from Sigma Aldrich, (St Louis, US-MI). Solvents were from Panreac (Barcelona, ES), Carlo Erba, Strada Rivoltana (Rodano, IT) and were of the highest analytical grade. The Folin-Ciocalteu reagent was from Merck (Darmstadt, DE).

2.2. Plant material and preparation of the extract

75 µl of AIE was added to 125 µl of Folin-Ciocalteu reagent and, then, to 500 µl of ddH2O water. The mixture was shaken and stabilized for 3 min before adding 1250 µl of Na2CO3 (7%) and adjusting the final volume with ddH2O to 3 ml. After incubation for 90 min in dark, the absorbance was measured at 760 nm [22]. Results were expressed as mg of Gallic Acid Equivalent /g Dry Weight of the AIE (mgGAE/gDW AIE).

The proanthocyanidins content was determined according to the method of Falleh [22]. 50 µl of AIE were mixed with 3 ml of vanillin (4%, w/v). Then, 1.5 ml of hydrochloric acid (12 M) was added to the mixture. After incubation for 15 min at 25°C, absorbance was measured at 500 nm. Results were expressed as mg Catechin Equivalent/g of Dry Weight of the AIE (mgCE/gDW AIE).

Total antioxidant capacity can be calculated by the method described by Prieto [23] 0.1 ml of sample solution at different concentrations (0.01-1 mg/ml) was combined with 1 ml of reagent (0.6 M of sulfuric acid, 28 mM of sodium phosphate and 4 mM of ammonium molybdate). The tube is capped and incubated in a boiling water bath at 95°C for 90 min. After cooling the sample to room temperature, the absorbance of the aqueous solution is measured at 695 nm against blank in UV spectrophotometer. A typical blank solution contained 1 ml of reagent solution and the appropriate volume of the same solvent used for the sample and it is incubated under same conditions as rest of the sample. For samples of unknown composition, antioxidant capacity can be expressed as:

The DPPH radical scavenging assay employed here is as described by Braca [24]. The reduction capability of DPPH radical is determined by the decrease in absorbance at 517 nm induced by antioxidants. Ascorbic acid (AA) is the reagent used as standard. The sample is able to reduce the stable radical DPPH to the yellow-colored diphenylpicrylhydrazine [25]. Experimentally, various dilutions of the methanolic solution extractor standard (0.01-1 mg/ml, in triplicate) were added to DPPH solution (0.035 mg/ml). The absorbance of the mixture was taken at 517 nm with methanol as blank. A control sample with no added test compounds was also analyzed. Radical scavenging activity was expressed as a percentage and calculated using the formula:

The superoxide anion scavenging activity of the plant extracts can be measured as described by Robak and Gryglewski [29]. The superoxide anion is generated in 3.0 ml of Tris-HCl buffer (16 mM, pH 8.0), containing 0.5 ml of nitro blue tetrazolium (NBT) (0.3 mM), 0.5 ml of NADH (0.936 mM) solution, 1.0 ml of extract and 0.5 ml of Tris-HCl buffer (16 mM, pH 8.0). The reaction is initiated by adding 0.5 ml of phenazine methosulfate (PMS) solution (0.12 mM) to the mixture, incubated at 25°C for 5 min and then the absorbance is measured at 560 nm against a blank sample. The percentage of O2°- scavenging was calculated from the equation:

The reducing power of the extract was determined according to the method of Oyaizu [30] and compared with AA. Experimentally, a methanolic solution of the extract (1 ml) at various concentrations (0.01-1 mg/ml) was mixed with phosphate buffer (0.2 M) and potassium ferricyanide (1%). The mixture was incubated at 50°C for 20 min. Aliquots of trichloroacetic acid (10%) were added to the mixture, which was then centrifuged at 3000 rpm for 10 min. The upper layer (2.5 ml) was mixed with distilled water and a freshly prepared ferric chloride solution (0.1%). The absorbance was measured at 700 nm. Ascorbic acid was used as standard. A control sample was prepared without adding standard or extract.

The FIC ability of the extract was determined according to the method of Singh and Rajini [31]. A methanolic solution of the extract (1.0 ml) at various concentrations (0.01-1 mg/ml) was added to 1.0 ml of FeSO4 (0.1 mM) and 1.0 ml of ferrozine (0.25 mM). The tubes were shaken well and left to stand for 10 min. The absorbance was measured at 562 nm. The ability of each sample to chelate ferrous ions was calculated relative to the control consisting of only iron ferrozine, using the following formula:

In the second part of this work, we focused our efforts to study the effect of Ajuga iva aqueous extract as an antioxidant agent by measuring the IC50 in mg/ml. It is important to mention that all Ajuga iva organ antioxidant activities are significant lower than that of AA considers as reference. 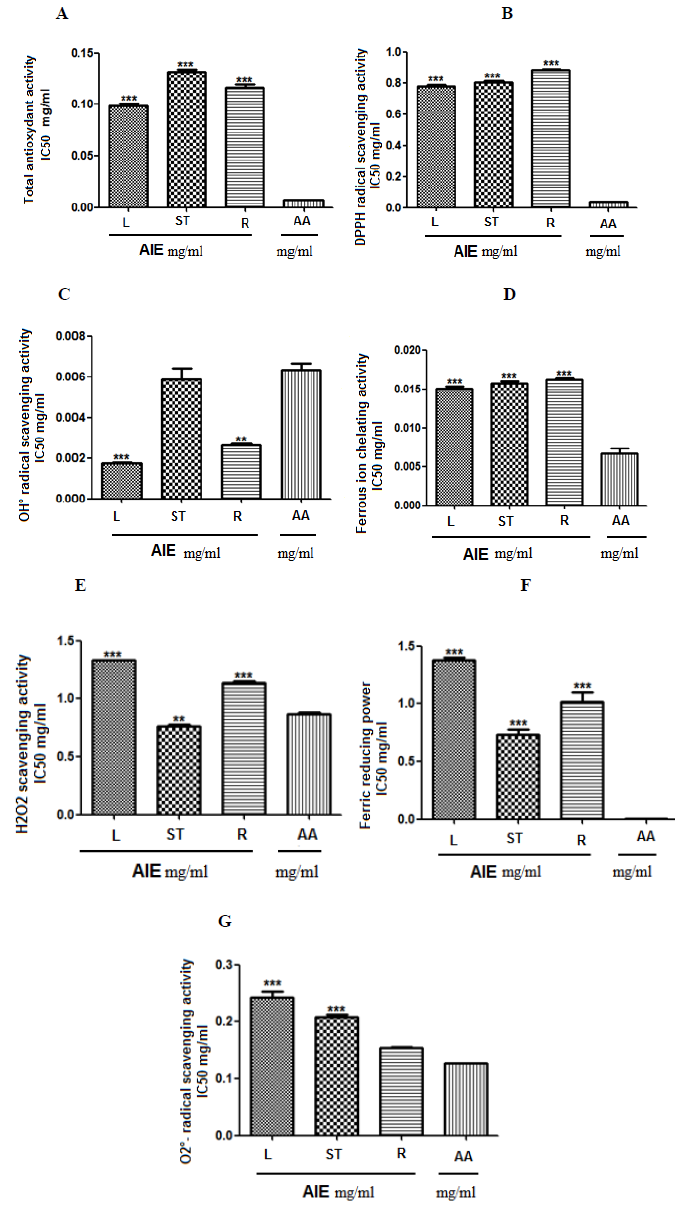 In our study, the phytochemical analysis of AIE showed the presence of several flavonoids. Since flavonoid have been reported to present antioxidant activity [45,46] it may be suggested that the antioxidant activity of Ai might be related in part to these compounds. Indeed, it is well established that flavonoids act as free radical scavenger [47] and that tannins have also antioxidant effects [48]. Moreover, the superoxide anion and hydroxyl radical could induce deleterious effects [49,50]. The present study showed the efficacy of the AIE to reduce oxidative stress parameters in vitro, due essentially to their richness of flavonoids and tannins, since it is well known that polyphenol compounds are potent natural antioxidants [51-53]. Our findings are confirmed by other investigations. Thus, Taleb-Senouci et al. [34] reported a high antioxidant effect of lyophilized AIE which is able to reduce the oxidative stress and prevent lipid peroxidation in vivo [15,35].

With regard to the mechanism of antioxidant activity, one can speculate that Ajuga iva extracts act as direct antioxidant agent by the scavenging ROS which may be attributable to their hydrogen-donating ability [54,55]. Moreover, AIE as iron chelators, exert a secondary antioxidant effect by chelating the bivalent iron necessary for the formation of hydroxyl radicals in the Fenton reaction [56].

These results suggested that AIE exhibit antioxidant activity may be exerted by both chelating metal transition ions as well as by scavenging free radicals. Observed biological activities could be also attributed not solely to the studied phenolic contents, but might be attributable to other unidentified substances or to synergistic interactions between identified ones.

The current study is the first to investigate various AIE for their phenolics composition and antioxidant activities in vitro. It gives scientific bases for use of this species as a potent source of natural antioxidant agents. Our results further made the link between phytochemically composition of plant organ extracts and their antioxidant capacity. Our results also emphasize the ability of AIE leaves, as scavenger and iron chelators, to exert a direct and secondary antioxidant effect by preventing the Fenton reaction.