Patent Ductus Arteriosus and Hypotension in a Preterm Infant: Fluids or Furosemide?

Hypotension is common in preterm infants. A gestational age-based BP range has been published but the definition of “normal” blood pressure (BP) in preterm infant has not been established. The use of gestational age as surrogate of mean arterial BP is discouraged. Preterm infants are at risk of low blood flow and low BP due to many factors. Patent ductus arteriosus (PDA) is one of the factor that leads to diastolic hypotension because of the diastolic run off of blood flow into the pulmonary vascular system from left-to-right shunt. Hypotension with is often difficult to treat. The dilemma is restricting versus liberalizing fluids. At one end we have fluid overload on left atrium while at the other end we have pulmonary edema. We present a case in brief, followed by the discussion on how one should approach such a situation.

The definition of “normal” blood pressure (BP) in preterm infant is not established. Observational study with limited data has been published providing a gestational age-based BP range (Table) [1]. In preterm infants the most common cause of diastolic hypotension is a patent ductus arteriosus (PDA). This occurs because of diastolic run off into the pulmonary vascular system from left-to-right shunt [2]. Due to the shunting and increase flow in the pulmonary vasculature, fluid overload occurs in the lungs leading to edema. Further venous congestion increases the preload on the left atrium. Therefore, decision regarding giving fluids or furosemide is not easy. Many factors play a role in the management of hypotension with PDA. Here we present a case of preterm infant who had hypotension and PDA. The case presentations is followed by literature review on the approach to treatment of hypotension with PDA.

This male infant is born at 265/7 weeks of gestation to a 29-year-old G2P0010 mother. The pregnancy was complicated by class B diabetes, omphalocele and two- vessel cord. Antenatal screen were negative for any chromosomal abnormalities (FISH and Microarray negative). Mother received cerclage for short cervix. She presented to the labor unit complaining of leaking fluid. She received antibiotics, steroids, and magnesium sulphate. Next day, on examination, the fetal heel was found to be protruding from the cervix and mother was taken for C-section due to fetal malpresentation and omphalocele.

At delivery, infant was immediately intubated and omphalocele was covered with the sterile gauze. He was dried, stimulated, & bulb suctioned. Apgar scores were 2 and 5 at one and five minutes, respectively. In NICU he was placed on the oscillator ventilator. On day 4 of life, he developed a loud murmur and was noted to have low blood pressures. Echo showed mildly decreased left ventricular (LV) systolic function with ejection fraction (EF) of 50-55%, small to moderate patent ductus arteriosus (PDA) with left to right shunt (peak gradient across shunt <10 mmHg) and patent forman ovale (PFO) vs small secundum atrial septal defect (ASD) with left to right shunt. The management of hypotension was started.

While treatment of neonatal PDA remains controversial, symptomatic management of concomitant hypotension is a clinical challenge. The question posed in this paper is about using fluid versus furosemide in dealing with hypotension in a preterm infant that happened to have a significant PDA. The usual supportive argument in favor of using furosemide is to treat the pulmonary edema secondary to left to right shunt overflowing the pulmonary vasculature. However, the potential cardiac effect of using furosemide is relaxing the PDA by activating renal prostaglandin E2 [3-5]. Also, by decreasing the preload, the cardiac output is compromised, which could accentuate hypotension further. The argument against fluid bolus is overloading the heart with extra fluid accentuating pulmonary edema. So, the question is how can we balance the treatment of hypotension in preterm infant with PDA?.

The answer lies in the complete clinical assessment of the infant. What is the respiratory status (e.g. requiring persistent mechanical support)?, are there any signs of heart failure?, or large left-to-right ductus shunt with evidence of hemodynamic compromise (echocardiogram findings)?, any signs of ductal steal phenomenon whereby descending aorta blood flow is compromised?, any oliguria or rising serum creatinine concentration? [6].

As noted in figure 1, there were no definite signs of severe pulmonary overload. The chest x-ray showed right upper lobe atelectasis and pulmonary interstitial emphysema without significant haziness. However, Figure 2a demonstrated significant PDA with left to right shunt and Figure 2b showed dilated left atrium suggesting pulmonary overflow. In the same picture (Figure 2c), however, showed a low left ventricular diastolic volume. In summary, with the mix echocardiographic findings, one cannot make a concrete decision on fluid versus furosemide. 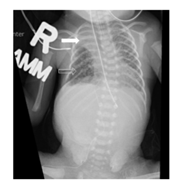 Next assessment should be to look for systemic signs of hypoperfusion. The infants had extremities edema and capillary refill was < 2 seconds. The blood gas showed a pH of 7.28, pCO2 of 53, pO2 of 60 with HCO3 of 22 and -0.9 base access. Serum creatinine was 0.7 mg/dL with normal electrolytes. The fluid assessment showed an appropriate input and output (Figure 3). For persistent low BP, the infant received blood (hemoglobin of 12 g/dL) followed by dopamine infusion (Figure 4). Fluid bolus should not be given without complete clinical assessment. Ewer et al [7] have concluded in their study that unless there is clear evidence of hypovolemia, clinicians should exercise caution when prescribing volume expansion. They showed that aggressive fluid bolus administration of or greater than 30 mL/kg  to be associated with increased mortality in neonates of 27-28 weeks' gestation. 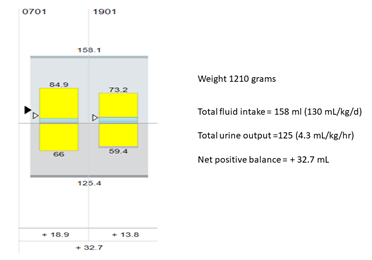 Figure 4: 24-hour Blood Pressure Readings obtained from indwelling radial artery catheter (arrows pointing at the time of use of blood and dopamine).

The other argument is the definition of hypotension in preterm infants and using a gestational age-based mean arterial pressure (MAP). Batton et al [8] have argued against the use of MAP less than or equal to the infant’s GA. Similarly, despite ongoing clinical use, literature is sparse on the comparative studies on the use dobutamine, epinephrine, norepinephrine, vasopressin or milrinone in neonatal hypotension [9]. Also, among the different vasopressors, there is no agreement on the superiority of one over other, however, dobutamine use has been down from the second to fourth vasopressor in neonatal hypotension (Figure 5) [10].

In conclusion, when encountered with hypotension in preterm infant with concomitant PDA, one must look at many factors to decide on the fluid chase or giving diuretics. Figure 6 summarizes these steps. A comprehensive assessment of the respiratory status, perfusion and urine output should be coupled with an echocardiogram and looking at blood gases, serum creatinine and electrolytes. 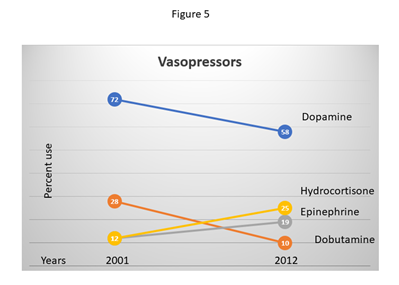 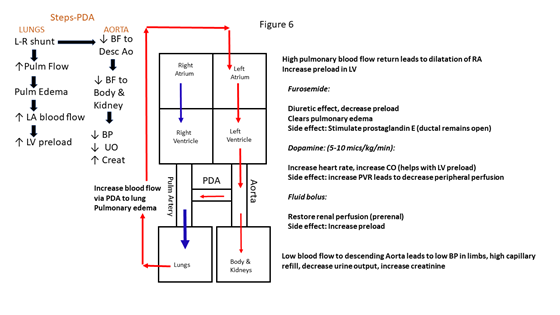