Citation: Serghei A. Baranov, On the Size Dependence of the Surface Tension for Micro- and Nanocylinder. Journal of Analytical Techniques and Research 3 (2021): 39-45.

The theory of surface phenomena in the production of micro- and nanocylinder for important cases is considered. The case of a nanocylinder is considered, when its diameter is greater than, equal to, or less than Tolman's length. We found a correspondence between the Gibbs – Tolman – Konig – Buff and linear Van der Waals theories. But for a nonlinear theory, this correspondence is absent.

Recently the demand for much attention has been devoted to nanomaterials, which is related to their wise use in rapidly developing nanotechnology. An important role in these technologies is assigned to the study of surface phenomena.

The surfaces energy [1–5] appears in many equations of nanotechnology physics. The surfaces tension determines such parameters and phenomena as the capillary pressure, wetting (contact) angle, saturated vapor pressure, adsorption, capacitance of the double electrical layer, work spent on the formation of critical nuclei, length of capillary waves, etc. We will consider isothermal processes.

In 1949 Tolman [6], on the basis of the Gibbs thermodynamics description, obtained the formula (also see below form (6)). 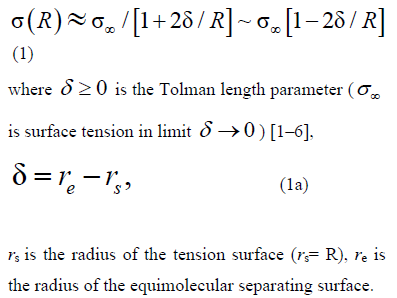 The surface tension acts on a separating surface. Excess pressure is provided by the Laplace equation [1-5]:

To determine the surface tension, let us apply the Gibbs equation that can be written in the form of

parameter characterizing the thickness of the interfacial layer (the Tolman length in (1) – (1a)) is used as a parameter δ which is equal to the distance between the surface of tension and equimolar surface. The numerical values of parameter δ are in the range from 0.1 to 10 nm (see [1-10]). When writing the equation (3) we have taken into account that the differential for the chemical potential and the Gibbs adsorption are

difference in interfacial phases. Equation (3) holds for any smooth interfacial phase irrespective of its geometrical shape. In what follows we assume the Tolman length parameter,δ, does not depend on the curvature radii. This assumption is considered acceptable if the curvature of the surface is not too large compared with 1/δ [1-10]. Substituting (2) into (3) we can obtain the equation ( ) 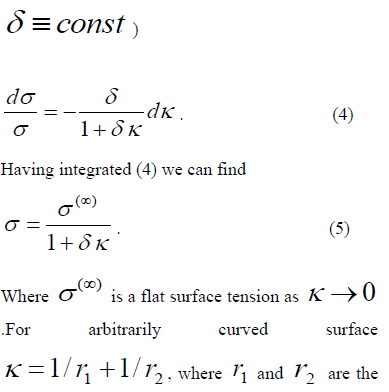 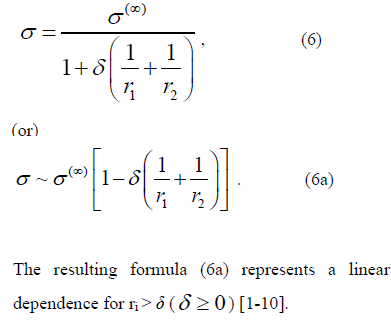 2.1 The equation Gibbs–Tolman– Konig–Buff for microwires A Small Long Cylinder

The radii of the equipotential (R) and equimolar (R + δ) surfaces should play an important role in obtaining the equation Gibbs–Tolman– Konig–Buff (GTKB) for micro- and nanowires. By using auxiliary functions that involve these radii, one can calculate the formula for the energy of surface tension. We introduce these auxiliary functions (see [7] for more details):

1). The geometric characteristic of nanoparticles (NPs) [7]:

The geometric characteristic of nanoparticles also determines form factor K that can be estimated from expression [7]:

2). The adsorption level (associated with geometric considerations) can be determined through the following function [7]: 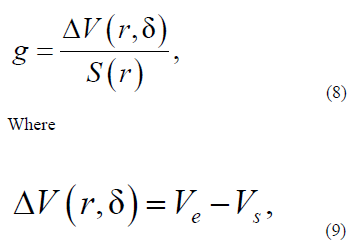 is a quantity directly dependent on the Tolman parameter?

Using these characteristic functions based on the Gibbs theory [1–6], one can obtain the GTKB equation in the most general form (for the derivation of the equation in more detail, see [7]):

The formal solution of this fairly simple-looking equation can also look quite simple. However, the formal solution is not informative without specifying auxiliary functions because in the concrete calculation of an integral, it is always necessary to take into account the form of polynomials that arise from the form of characteristic functions. This is connected with the fact that it is necessary to find an analytical branch that corresponds to the required physical solution.

The auxiliary functions for cylinder the have the following functional dependencies:

where R and L are the radius and height of the cylinder.

In well-known monographs [1–5], and fundamental works [6–10] it is stated that the surface tension must decrease upon decreasing microwires radius. Let us consider this problem in greater detail.

where R is the microcylinder (microwires) radius,

δ≥0(The Tolman length) is a non-negative parameter characterizing the thickness of the interfacial layer. In surface thermodynamics the Tolman length is used as a parameter which is equal to the distance between the surface of tension and equimolar surface. The numerical values of parameter are in the range from 0.1 to 10 nm. 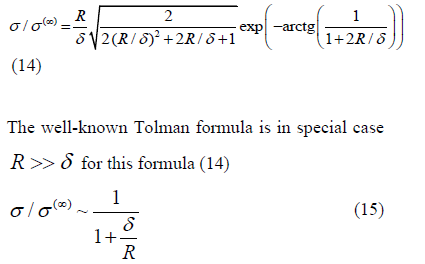 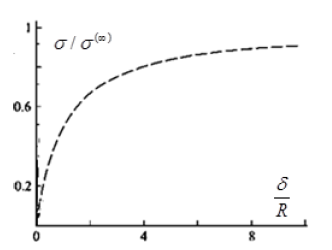 The articles [11 - 17] have considered a general approach to the relationship between the GTKB theories and Van der Waals theories. It is proposed, at first, to solve an equation for the introduced order parameter, similar to the Lagrange–Euler equations (LEe) that can be presented in the following form:

where L is the dimension of space (or the number of components of the order parameter, in case cylinder L=2), whereas the indicated polynomial F[(a,p)] represents an analytic function that is determined for each specific case.

Parameter a=r-1cc that is, it is a parameter that determines the size of NPs. Equation (16) can be obtained based on the most general principles [11 - 17].

The basic equation of the linear Van der Waals theory of an inhomogeneous medium can be written in the form:

where n (x) is the function when proportional to the volume density N(x) (x = r/δ, no=const.).

The physical solution to Eq. (17) has the form: 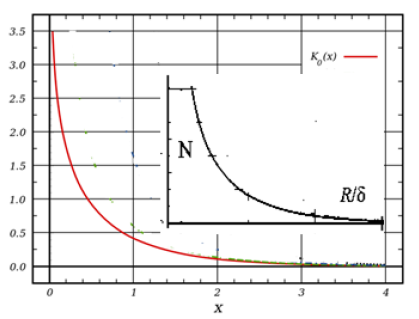 We will accept for the volume density function, N(r/δ). We get:

Substituting solution (18a) into expression (18b) and integrating, we obtain:

Solution (19) can be used for calculating adsorption, which is defined as the excess number of atoms or molecules in the surface layer of the nanoparticle per unit area:

Taking into account adsorption (20), we obtain the differential equation. 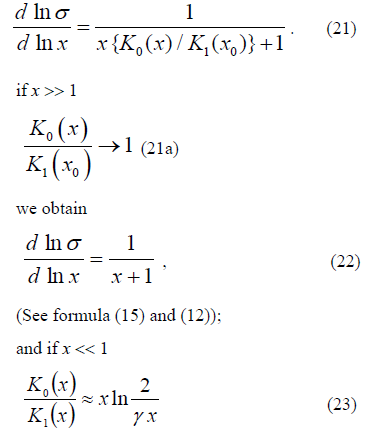 This equation is integrated numerically. 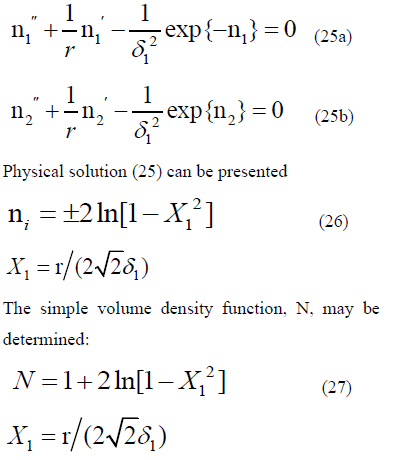 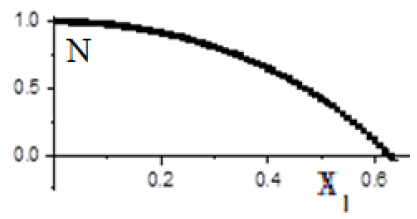 The results obtained have a physical meaning only as long as the function N is positive.

(i) If equations (25a, b) can be compared with its linear analogue (17), then solution (25a, b) is not reduced to linear analogs. The solution has a highly non-linear character. This nonlinearity cannot be described by perturbation theory, starting from a linear result.

(ii) If the formation of nanoparticles is determined by nonlinear processes, then there is a suspicion of an incorrect description of it within the framework of the classical theory of nucleation.

This work was supported by the Moldavian national project and the Shevchenko Pridnestrov'e State University project.