Methodology: A prospective observational study was conducted in Department of Physical medicine and Rehabilitation in SVNIRTAR, Odisha, India from July 2017 to Dec 2018. Sample size was 55 and incomplete spinal cord injuries in ASIA B-E, neurological level C5 and below, age >10 yrs were included. Patients were classified into 2 groups of posterior column sparing and spino-thalamic sensory sparing. Patients were evaluated using ASIA scale, Neurological examination by ISNCSCI and functional improvement by SCIM III.2 groups were reassessed after 6, 9, 12 months.

Results: Pure posterior column sensory sparing patients were 6 out of 55 and 50% belonged to C6 vertebral level. All 6 remained in ASIA B after 1 yr while 9 of ASIA B converted to C,10 from ASIA C to D and 1 from ASIA D to E. There were significant changes in motor and sensory scores of 2 groups which were statistically significant. SCIM score in Group A increased by 9.7 points after 1yr while there was 31.1 increase in Group B.

Spinal cord injury is complex and common causes include motor vehicle accidents, falls, violence, sports injuries, degenerative spinal lesions [1]. Report of International Conference (Spinal Injuries Management, New Delhi, 1995), states the incidence of spinal injury was estimated at 15 new cases per million per year in India.SCI in India occurs mainly due to fall from height and road traffic accidents forms the second in list [2]. The devastating nature of spinal cord injury (SCI) presents physical, psychologic, social and economic changes to affected individuals, families, and society. Early identification of precise location and severity of each patient’s neurologic impairment can provide improved understanding of the patient’s prognosis. Complete SCI constitutes the most severe form, with only 2% to 3% of such patients recovering to American Spinal Injury Association (ASIA) grade D status at 1 year after injury. Incomplete injuries have variable prognosis. They are found in only 10.3% of SCI cases per year [3], and are studied less thoroughly than other groups. Examining patients according to the Standards yields several classification variables and scales. The ASIA motor scores have been most often used in describing recovery after SCI or response to interventions. Sometimes motor recovery is reported by subgroups based on AIS grade, such as complete (AIS grade A) versus incomplete (AIS grades B, C, and D) [3] or by level of injury (tetraplegia or paraplegia) [5-8]. Most important determinant of long term prognosis is whether the injury is complete or incomplete [2]. The clinical function of posterior columns of spinal cord and injury of these structures had been a matter of debate for years [11]. Fine touch, vibration, joint position and movement and discriminative touch is served by posterior column and medial lemniscus. The prognosis of preservation of spinothalamic tracts in the functional recovery in SCI patients was studied widely [1, 3-9] Evidence in the reviewed literature suggests that the mode of sensory sparing, specifically pinprick preservation, may be an important factor in predicting recovery in persons with motor complete, sensory incomplete SCI [4-6]. Following SCI, adaptive reorganization of neural pathways occurs after injuries that act to restore some of the lost function. This is known as neuroplasticity. This is the basis for rehabilitation and final prognosis of the patients. Understanding and establishing prognosis at the earliest is central to the delivery of effective and efficient rehabilitation following traumatic spinal cord injury. This study tries to evaluate the importance of preservation of posterior column in final prognosis of spinal cord injury.

Patients were sub classified as:-

Both groups of patients were assessed in detail of neurological level, autonomic function and functional status. The 2 groups were reassessed after 6 months, 9 months and 12 months. In each session they will be evaluated for any progress in ASIA Impairment scale, neurological level and functional improvement (using Spinal Cord Independence Measure SCIM III). The ASIA Motor Score uses a standard six point manual muscle testing system to assess strength in five key upper extremity muscles representing the five consecutive neural segments between C5 and Tl, and in five key lower extremity muscles representing neural segments between L2 and S 1. The total possible upper extremity motor score (UEMS) is 50 points, and the total lower extremity motor score (LEMS) is 50 points. Thus, an individual with no neurological deficit would have an ASIA Motor Score (AMS) of 100 points.

Data was entered in Microsoft excel and was analysed

3.3 Comparison of outcome at the time of examination

Table 1: Percentage distribution of the sample according to age. 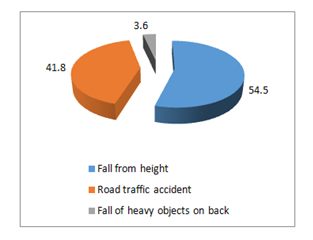 Table 2: Percentage distribution of sample according to anatomical level of injury.

Table 3: Comparison of ASIA scale based on sensation in S4-S5 dermatome at the time of examination.

Table 4: Comparison of SCIM score based on sensation in S4-S5 dermatome at the time of examination.

Table 5: Comparison of percentage increase in SCIM based on sensation in S4-S5 dermatome.

Many studies have been conducted worldwide on spinal cord injury, of its etiology, demographic factors, factors affecting prognosis, clinical assessment variables, outcome measures reliability and validity and lot more. This study is intended to observe the prognostic importance of posterior column sensation sparing in the ultimate recovery in Spinal cord injury patients. There were 6 patients in 1st group and 49 patients in 2nd group, a consistent finding evaluated world wide of incidence of Anterior cord syndrome. These 2 groups were evaluated separately of their change in neurological status, ASIA scale, motor scores, sensory scores and SCIM scores at 6m, 9m and 12 months. The whole study is discussed here in following headings.

4.1 Demography and etiology of injury

The mean age at time of injury in our study is 24.7 ± 9.6 yrs. Several state registries outside India have produced relatively comparable age specific incidence rates. In India Chacko et al [2] have similar mean age group. The male gender incidence is 6.8:1 closely relating to the Indian studies and NSCISC/ Shriner Hospital SCI database and with population based registries such as in Oklahoma where 80 % of SCI occurred among men. The 6:1 ratio remained consistent over time despite significant trends in age at injury, ethnicity and etiology of injury. Fall from height forms the major etiology of injury constituting 54 % of the study group while road traffic accident caused 40 % placed at 2nd major cause. This is consistent with all Indian studies and studies from developing countries [34, 35]. The order of etiological factor is different in all studies from developed countries which have RTA and sports injuries forming the major cause [26]. Of the total 55 cases 42 cases were operated within 2 months while 13 cases were not operated. There was no significant relation between the neurological function and the surgical status. In 2017 Deepak et al [6] found that 38% of patients who have undergone early decompression improved by 1 ASIA grade by 1 yr while neurological improvement in non operated was 27 %.

The anterior cord syndrome involves a lesion that affects the anterior two thirds of the spinal cord while preserving the posterior columns. Schneider (1955) felt that the syndrome of anterior spinal cord injury was the result of acute anterior spinal cord compression by a dislocated bone fragment or herniated disc material, or actual destruction of the anterior portion of the spinal cord. Usually patients with an anterior cord syndrome have only 10% to 20% chance of muscle recovery, and even in those with some recovery, there is poor muscle power and coordination. The sparing of pain sensation below the level of injury is significant because it is associated with a higher incidence of useful motor recovery. This can be explained by the anatomical proximity of the spino-thalamic and cortico-spinal tracts in the lateral columns of the spinal cord. Partial preservation of the perception of painful stimuli indicates some integrity of the spino-thalamic tracts; it ensures that parts of the cortico-spinal tracts which lie posterior to the spino-thalamic tracts in the lateral funiculi may have escaped damage from trauma to the anterior part of the spinal cord. The preservation of the function of the sacral segments has been regarded as an important factor to predict the degree of functional recovery after spinal cord injury. Waters et al reported the intactness of sacral neurology in the definition of complete spinal cord injury [12]. This series of patients without sacral sparing, the incidence of motor recovery in the lower limbs (four out of eight) was significantly higher (P = 0.002, Fisher's exact probability test) than in the series of patients with complete injury where only one out of 40 patients recovered to Frankel C. In our study the total incidence of pure posterior column sensory sparing lesions are 6 in 55 patients which correlates well with the total incidence pattern of 1.6 %. This low incidence may be due to rarity of the mechanism of injury. The preservation of posterior column sensation alone compared to spino-thalamic sparing was studied in detail and was concluded that there was just 10% to 20% chance of motor recover, and even in those with some recovery, there is poor muscle power and coordination.

4.3 Neurological level and extend of injury

In the present study we had 54.7 % of injury at thoracic spine level followed by 23.6 % at lumbar and least injury of 21.8% at cervical level. This may be consistent with the mechanism of injury in causing the trauma. The study group of posterior column sparing patients were 3 having C6 level,1 in T1,1 in T4 and 1 in T 12 level. In earlier studies in India Chacko et al [2] found that injury at lumbar region was found at higher percentage (59.1%) followed by thoracic and cervical. Roop Singh et al [6] in a study in Haryana found a higher incidence of thoraco lumbar injuries.

Gradation of increase in motor sub scores were recorded and graphed of the 2 groups. In group A motor scores increased from 31.5 to 37 by end of 1 yr, A n increase of 5.5 motor points. In Group B patients motor score increased from 48.3 to 62.5 by end of 1 yr, A change of 14.2. The increase in motor scores are directly related to the functional recovery as stated by several studies. Our study results were comparable to those study done by Katoh and El Masry and those done by Folman et al and Poynton et al which states that spinothalamic sparing patients had mor ambulatory and functional outcome due to increased motor functional level.

SCIM is the specific outcome measure used in spinal cord injury [38]. The SCIM score in 2 groups were calculated and recorded. In group A the SCIM score increased from 20.3 -30 by end of 1 yr\, a total of 9.7 point increase. In group B the SCIM score increased from 35.2-66.3 by the end of 1 yr which is 31.1 point increase, a greatly significant value. The SCIM scores were compared on each follow up and every values are significant statistically at time of examination, 6m, 9m and 12m. The p value at the time of examination was 0.027, 6m p=0.000, 9m p=0.000, 12 m p=0.000 (Figure 3). According to Scivoletto et al [36] An improvement of at least 4 points of the total SCIM is needed to obtain a small significant improvement and of 10 points to obtain a substantial improvement. In Group A patients the point increase in SCIM score is 9.7 and we can say that SCIM had just a small significant improvement, while in Group B patients there was a 31.1 point increase for which we can say that there has been a substantial improvement (Table 5). 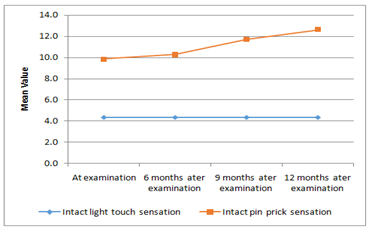 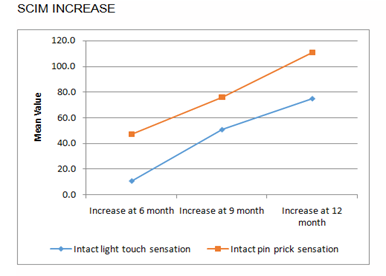