In the prone radiograph, a left pneumothorax may outline part of the upper descending aorta with a sharp interface (similar to the sharp edge of the lateral cardiac margin seen in supine radiographs). The sign is illustrated in a 2 month-old male infant with considerable bilateral lung disease.

Pneumothorax is a frequent respiratory tract complication in newborn infants. Radiographic perception of pneumothorax is well known for the supine image (sharp edge of the heart and the anterior hemidiaphragm); and on the upright image, it is found superiorly and laterally interfacing with lung. In the less frequent situation of a prone radiograph of an infant or older subject, recognition of a sharp edge of the upper descending aorta may permit a diagnosis of left pneumothorax.

A 2-month old male with left pneumothorax on prone radiographs is shown to illustrate the sharp edge of aorta as a sign of pneumothorax.

A left pneumothorax is seen on Figure 1, where a sharp edge interface of air in the pleura abuts the sort tissue of the descending aorta. The subject died the following day. This is a sign apparently not previously reported - in my 50 years of radiology practice I have not recognized the sign in any other child. 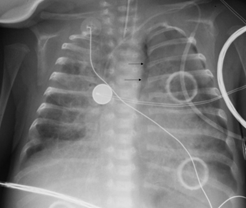 Figure 1: Two month-old boy with bilateral lung disease; prone chest radiograph. The arrows indicate the sharp outline of the lateral upper descending aorta, a “sharp edge sign”. A stripe of lucency lateral to that interface represents responsible the posterior pneumothorax in this prone position. Further pneumothorax is noted at the lateral left hemithorax.

Many clinical reasons for prone position are known, including open dysrhaphism in an infant and attempts to improve oxygenation in patients with hypoxemic respiratory failure [1]. Many signs of pneumothorax are well known for the supine and upright positions; analogous to the current sign is the sharp edge of the heart margin on the supine radiograph [2]. However, the radiographic recognition of pneumothorax in a prone position has not been well described.

A sharper edge than normal appears when an x-ray beam is parallel to an interface between a soft tissue structure (such as the heart or the aorta) and pure air (as in pneumothorax), as opposed to less lucent usual lung air which contains also bronchi, blood vessels, and other lung contents. Such a sharp edge interface is the opposite of the silhouette sign in which an expected lung-soft tissue interface is lost because of soft tissue interfacing with soft tissue. The sharp edge of the right heart (and thymus) border from an anterior pneumothorax on a supine chest is illustrated by Figure 2 and is explained by diagrams in reference [2].

A lung that is diseased tends not to collapse completely when pneumothorax is present. In supine position a pneumothorax rises anteriorly. 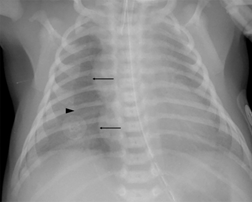 Figure 2: Two day-old boy following surfactant administration for surfactant deficiency disease with increased respiratory distress and oxygen desaturation; supine chest radiograph. A right anterior pneumothorax in indicated by the sharp edge of the heart and thymus (arrows). The arrowhead indicates the less sharp lateral margin of the pneumothorax. Note that the left heart margin is far less sharp than the right. The right anterior hemidiaphragm is also more sharply seen than the left, due to the anterior pneumothorax. The pneumothorax was confirmed by a left side down lateral decubitus image.

Our subject shown in Figure 1 had bilateral lung disease and died the day after the demonstrated prone image was obtained; no autopsy was obtained. His chest radiograph serves to illustrate a vagary of the sharp edge sign and we offer it as a new sign of posterior pneumothorax potentially seen on prone patient radiography.