Methods and Material: A 23-year old male presented with right femoral subtrochanteric fracture and ipsilateral open tibial and fibular fracture. He had been suffered IPH from childhood and his laboratory test results was too poor to undergo invasive surgery. Minimally invasive treatment fashions were selected, including skeletal traction, external fixation and autograft skin coverage.

Results: At follow-up of 8 months, he regained full weight bearing function and was satisfied with the result.

Conclusions: Selection of minimally invasive treatment options in case of multiple trauma concomitant with severe systemic lesion like IPH is mandatory to avoid massive and critical invasion, and to recover limb’s function properly.

The management for multiple trauma patient is not simple and requires application of various modes and steps according to area, property, severity and type of existing injury. Furthermore, if there is trauma which requires invasive operation, but it accompanies a pre-existing systemic lesion, it makes the management very difficult [1-3].

Idiopathic portal hypertension (IPH) is the lesion that is characterized by the presence of portal hypertension in the absence of liver cirrhosis [4-9]. The key issues in the management of patients with IPH are related mainly to management and prevention of variceal hemorrhage. If severe trauma accompanies this lesion, invasive surgery is contraindicative [4, 6, 9]. The patient in the case had been suffered IPH from childhood and had several times of intervention to treat it. Unfortunately he injured in traffic accident and suffered right femoral subtrochanteric fracture and ipsilateral open tibial and fibular fracture. Both injuries needed invasive operations, but his liver condition didn’t allow it, thus we sought minimally-invasive alternative to recover injured limb’s function and treated him for 47 days. At 6-month follow-up after discharge the patient regained ambulatory function for full weight bearing and was satisfied with the result. We experienced that correct selection of minimally-invasive fashion in multiple trauma patient concomitant with systemic lesion which is contraindication for major open surgery could recover function of injured limb and yield comparatively fair result. 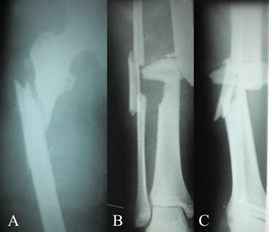 On endoscopy finding of his stomach there was esophageal varix grade III, erosive gastritis.In consultation with internal medicine department he was diagnosed idiopathic portal hypertension (IPH). The patient was concomitant with IPH and poor liver function, in addition there was esophageal varix on endoscopy, otherwise ORIF for right femoral subtrochanteric fracture, and secondary debridement, pedicle flap transplantation and external fixation for open tibial fracture were appropriate. Unfortunately he was not suitable for indication for invasive ORIF, and large operative invasion might threaten his life critically. We selected skeletal traction for right femoral subtrochanteric fracture; external fixation and epithelial skin grafting for open tibial fracture and soft tissue necrosis. The skeletal traction weight for right femoral subtrochanteric fracture was set to 9kg that was about 15% of patient’s body weight at the outset, and was reduced to 6Kg 7 weeks later.

Immediately after secondary debridement of the wound of open tibial fracture, external fixation was applied. There was partial necrosis of the wound 17 days following trauma, and after resection of it, proximal and distal ends and some part of fragment were exposed. A few days later partial decortication of exposed bone, drilling of free fragment and epithelial skin grafting were done. (Figure 2). There was angulation deformity of tibial fracture on postoperative 5-day X-ray finding, which needed correction.Laboratory tests 6 days after operation were RBC 3.08T/L, ESR 37mm/h, ALT 119/L, AST 94U/L.There was no systemic or local abnormal hemorrhage. Because union of subtrochanteric fracture was identified 8 weeks after trauma, skeletal traction was removed; we encouraged knee motion. The area of tibial wound was reduced to about 1cm×1cm and he discharged (Figure 3). 8 months after trauma his wound was nearly healed and the patient visited our department on his foot; at this time there was radiographic finding of union at the open tibial fracture and full weight bearing; we removed external fixation, and he was satisfied with the result (Figures 4 and 5). 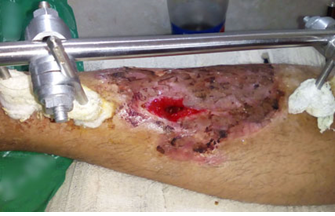 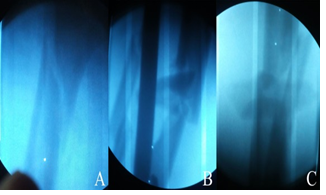 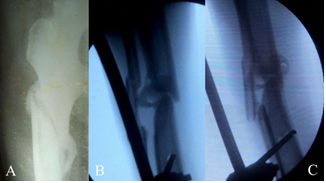 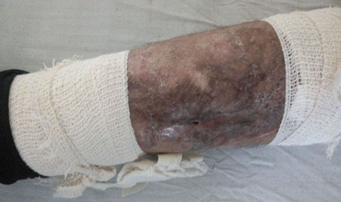 Because of preserved liver function, the prognosis of patients with IPH is better than that of patients with cirrhosis who have a similar degree of portal hypertension. However, a subgroup of IPH patients progresses to develop advanced hepatic insufficiency, eventually requiring liver transplantation [4-6]. The key issues in the management of patients with IPH are related mainly to management and prevention of variceal hemorrhage [4, 8]. Multiple trauma concomitant with IPH is rare, and if invasive surgery is expected it could result in critical outcome without considering condition of liver and effect to the system [4, 7, 9]. The patient in the case had been suffered IPH from childhood and had several interventions for it. Unfortunately he injured in traffic accident and suffered right femoral subtrochanteric fracture and ipsilateral open tibial and fibular fracture. Both injuries needed invasive operations, but his liver condition didn’t allow it, thus we sought minimally-invasive alternative to recover limb’s function. Eventually we applied minimally-invasive fashions like skeletal traction for femoral subtrochanteric fracture, external fixation and epithelial skin grafting for open tibial fracture; thus found relatively fair result. Though skeletal traction and external fixation for fracture treatment are relatively conventional and conservative fashions [1-3, 10], we experienced that proper combination of these methods are minimally-invasive and effective when patient’s condition is bad or concomitant with a lesion not allowing major surgery invasion. In addition, we confirmed again that relatively large butterfly fragment which is partially exposed should not be removed and managed carefully; then it could play a positive role in fracture union.

We consider that proper application of minimally-invasive methods such as skeletal traction or external fixation in multiple trauma patient concomitant with IPH like this case can result in fair result.