A 50-year-old male presented with a non-tender mass on the left eye upper lid that gradually increased in six months. There was no history of trauma, other tumor or surgery. With clinical diagnosis of giant chalazion incision drainage and curettage was performed. Tumor recurred at the same place after 3 months. Meibomian gland carcinoma was suspected, excised in Toto and lid was reconstructed. Histopathology of biopsy material revealed adenocarcinoma of Meibomian gland. This rare presentation of adnexal malignancy could be missed and therefore author recommend biopsy of all lid lesion when operated.

Chalazion is a chronic granulomatous inflammation occurring commonly and presenting as nodular swelling in lids. It is a smooth hard swelling with normal overlying skin and intact cilia [1]. Meibomian gland carcinoma (MGC) or eyelid sebaceous gland carcinoma (SGC) is life threatening condition and therefore must be differentiated from chalazion. MGC is a hard tumor with irregular surface. Overlying lid skin and margin shows vascularization and cilia in that are absent [2]. On incision there is gritty hard feeling and there hardly any granulation and cheesy material which is quite common in chalazion. MCG is a highly malignant tumor with high tendency to spread. As sebaceous glands are present in entire length of tarsal plate as well as at caruncle, malignant changes in these glands could be multifocal. Unlike the radial spread of BCC and SCC, SGC spreads in superficial plane referred to as Pagetoid pattern [3]. .

A 56-year-old male patient was referred to us with chief complain of painless progressive swelling on the left upper eyelid in last six months (Figure 1a). The lids of fellow eye were normal. On his systemic examination, we did not find any other swelling, diabetes or hypertension. Complete mechanical ptosis was present due to the large mass. The uncorrected distance visual acuity (UCVA) was measured using ETDRS chart held at 6 meter distance from patient and in the left eye, it could be assessed after lifting the drooping upper lid and was 6/12. Pain and tenderness were absent. Prominent cutaneous blood vessels were seen on the regular smooth surface of the mass. Trans-illumination test was positive suggestive of cystic lesion. Lid margin showed presence of cilia. Our clinical diagnosis was a giant chalazion. Standard chalazion surgery was performed from the conjunctival side and gush of fluid (around 5 cc) came out. It was followed by cheesy material which was scooped out from it supporting our diagnosis of a giant chalazion. Chemical cautery by 10% trichloracetic acid application using swab stick was carried out inside wall of the cavity. The swelling totally collapsed and there was no palpable residual mass. Post-operative treatment consisted of topical framycetin 0.5% + dexamithasone eye drops (Sanofi, India). Oral Ibuprofen 600 mg, three times a day for three days and Amoxicillin 500 mg, three times a day for five days. 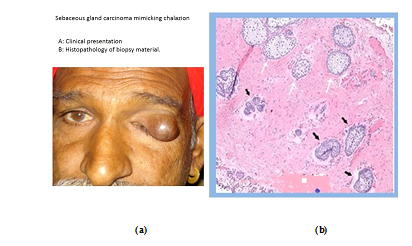 Figure 1: (1a ) Image of upper eyelid with giant size lesion having lobulated mass, smooth surface, and visible cilia at lid margin under the tumor. (1b) Histopathology slide of upper eyelid tumor mass with Hematoxylin and Eosin staining.

The patient presented to us after 3 months with a mass at the same location. It had an irregular surface and a hard consistency suggesting it to be malignant. Trans-illumination test was negative. Cilia were absent and surface vessels were present. Pre-auricular lymph nodes were not enlarged and the systemic examination was normal. Patient underwent re-surgery and the mass was excised with 4 mm of clear margins and lid reconstruction was done by Cutler Beard procedure [4]. Mass was sent for histo-pathological examination. It showed the cells in irregular lobular masses with distinctive invasiveness (Figures 1b). The cytoplasm was pale, foamy and vacuolated .Nuclei was hyperchromic [5, 6].

Chalazion is a common condition characterized by slow growing painless tumor of eyelids. Lid surface on the tumor is smooth and regular with presence of normal cilia. Variable amount of ptosis is present depending upon its size. As against the occurrence of chalazia in younger age, MGC has peak occurrence is in elderly patients (50 to 70 years of age) although, youngest patient recorded was 3.5 years old [7]. Meibomian gland carcinoma is commoner in Asian population than BCC according different studies to different studies [8]. But some meibomian gland carcinomas masquerade as a benign condition and delay the prompt excision resulting in metastasis [9]. Any unusual or recurrent case of proposed chalazion should be sent for histopathological examination even if the clinical picture suggests a benign etiology. In our case, the initial presentation showed presence of cilia and a regular surface which suggested a benign etiology. Meibomian gland carcinoma has a tendency to metastasize to periocular lymph nodes. As the first and second case scenarios were different, we might assume that it was a giant chalazion in the first place but chances are always there suggestion the former to be a rare presentation of meibomian gland carcinoma.

This case report aims to display unique clinical picture of meibomian gland carcinoma in which a giant cyst was presentation. To the best of our knowledge has not been mentioned in literature. Presentation as abscess was reported by Bacron et al. [10]. Cyst formation along with the malignant etiology is thought to be due to obstruction of the serous glands. Initially the tumor mass itself was very small making it rather impossible for us to diagnose it as a malignancy. Though cilia were not affected and had a regular surface, it turned out to be malignant. So we can say tumor extends beyond what is clinically evident Normally this presentation is not suggestive of malignancy and the further histopathology study is not routinely advocated but it is wise to send each and every uncanny appearing “chalazia” for histo-pathological examination to avoid undesirable outcomes like recurrence or malignancy and eventual metastasis.

In present study when giant chalazion was presented for the first time, we did not perform biopsy. It could be clinical misjudgment or it could be that carcinomatous changes occurred after 1st successful surgery for chalazion. The lesson oculoplastic surgeon should learn is to always perform biopsy of any lesion of upper lid and rule out malignancy and not wait for presentation of patient with recurrence of lesion.

We thank Priyadarshi Asnani of Deesa, Gujarat for providing the photos of the patient.

The authors certify that they have obtained all appropriate patient consent forms. In the form the patient has given his consent for his images and other clinical information to be reported in the journal. He understands that his name and initials will not be published and due efforts will be made to conceal her identity but anonymity cannot be guaranteed.