of Saudi Board of Endodontics, Dammam Medical Complex, SaudiArabia

This clinical report presents and describes both the endodontic and periodontal treatment of a mandibular first premolar exhibiting three root canals presented with perio-endo infection. Mandibular first premolars usually have a single root and a single root canal. The incidence of three root canals in this tooth is quite rare. Knowledge of root canal morphology, proper clinical examination, correct radiographic interpretation, using dental operating microscope, and careful tactile examination of the root canals are important in detecting the presence of the multiple canals and in treating the endodontic and periodontal lesions.

Successful endodontic treatment can be achievable with accurate diagnosis & treatment planning, along with having the knowledge of root canal morphology and its frequent variations [1]. It is generally recognized that the incomplete shaping and cleaning of root canals will lead to endodontic failure [2,3]. Amongst all the teeth, Slowey reported that mandibular premolars are the most difficult teeth to treat endodontically due to wide variation in root canal morphology [4]. The internal anatomy of a canal system may demonstrate fins, isthmuses, accessory canals, or diverse canal shapes. Ingle reported that root canals in mandibular first premolars as ovoid at the cervical level, round or ovoid at the mid-root, and round in the apical level. Mueller described the shape of the canals were usually quite round and conical, but inclined to be ribbon- like in the cervical third of the root [5,6]. Mandibular first premolars are known to have a single canal. A thorough understanding of root canal morphology is required for achieving high levels of success in endodontic treatment. Weine categorized the root canal system into four basic types [7]. Vertucci found numerous complex canal systems and identified eight pulp canal configurations and he described five different types of canal configuration for mandibular first premolar [8]. Pineda and Kuttler found 0.9% three root canals in mandibular first premolars radiographically [9].Vertucci using a transparent method found 25.5% of 400 mandibular premolars had two apical openings and 0.5% of the teeth had three apical openings [10]. On the other hand Walker reported 34% southern Chinese had two canals and 2% had three canals radiographically [11]. The fact that both periodontium and dental pulp are anatomically interrelated by virtue of apical foramen and lateral canals creates pathways of exchange of noxious agents between the two tissues [12]. Moreover resorption processes of the root surface, root perforation during endodontic treatment and opening of the dentinal tubules during periodontal treatment establish, yet ,another pathway across the body of the tooth structure [13]. A classification of these relationships was proposed by Simon et al. into Primary endodontic lesion, Primary periodontal lesion, Primary endodontic lesion with secondary periodontal involvement, Primary periodontal lesion with secondary endodontic involvement and True combined lesion [14]. The inflammatory lesions in the periodontal tissue induced and maintained by root canal infection often have a limited extension around the root apex, moreover, pulpal tissue may be significantly inflamed and yet exert little or no effect on the periodontium as long as the pulp remains vital [15,16]. Necrosis of the pulp, however, can result in loss of the periodontal support to the extent that apical marginal communication emerges especially if there is existing periodontal disease [17]. In accordance it seems that periodontal rarely jeopardizes the vital pulp function and retrograde pulpits through periodontal ligament rarely occurs [18]. Neither irreversible pulpits nor pulp necrosis had been reported in histologic studies of teeth extracted because of sever periodontitis [19]. However at the terminal stages, when the plaque microbiota has reached the main apical foramina, pulpal necrosis may result [20]. Occasionally endodontic and periodontal lesions may affect the same tooth and the two lesions may be completely separated or in few situations there is no obvious demarcation between them appearing clinically and radiographically as one lesion (combined lesion defect) [21]. A key consideration in diagnosis and treatment of cases with simultaneous periodontal and pulpal lesions is the extent to which the periodontal lesion contributes to the bone loss [17]. While the part of the lesion sustained by root infection can usually resolve after proper endodontic treatment, the periodontal component is a more difficult problem with little or no regeneration expected after the periodontal treatment [12]. This suggests that the if the majority of bone loss is due to periodontitis, regardless to the predictability of the endodontic therapy, the tooth may have a questionable, poor or even hopeless prognosis [22]. Therefore the proposed treatment strategy should be first to focus on the pulpal infection with debridement and disinfection of the root canal system. After successful endodontic treatment the residual periodontal lesion can be more predictably managed using a varity of treatment options including scaling, root planning or periodontal surgical modalities [23]. This case report describes both endodontic and periodontal treatment performed on a first mandibular premolar with three root canals, two buccal and one lingual, situated in one root, diagnosed with primary periodontal disease with secondary endodontic involvement (Class IV Simon classification), and exacerbation of acute periapical abscess. 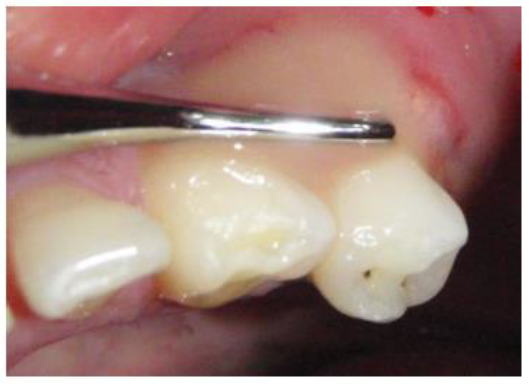 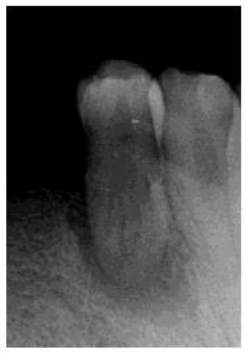 Based on the clinical and radiographic evidences, tooth #44 was diagnosed as necrotic pulp with exacerbation of acute periapical abscess, due to primary  periodontal disease with secondary endodontic involvement (Class IV Simon classification). The first visit was an emergency visit where After local anesthesia (local nerve-block) with 2% lidocaine HCL with 1:100,000 epinephrine (Lidocaine; Cook-Waite Laboratories, Inc, New York, USA), the tooth no #44 was isolated with rubber dam and clamp (Hygenic, Coltene Whaledent, USA).The access cavity was initiated with a round high speed diamond bur (Dentsply Maillefer, Ballaigues, Switzerland), under the DOM (Opmi Pico, Carl Zeiss, Oberkochen, Germany), at a lower magnification. Initially two canal orifices were located and patency was ascertained using a size 10 K file. After careful inspection under higher magnification, third canal orifice was located. Access cavity refined using Endo Access bur number A0164 (Dentsply Maillefer, Switzerland) and ultrasonic tips (CPR, Dentsply Maillefer, Switzerland). Working length was established with the use of an Apex locator (Root ZX, J. Morita Inc).The three root canals (MB,DB and L) were cleaned and shaped using Profile NiTi system (Dentsply Maillefer, Ballaigues, Switzerland) in crown down technique to a size 35/04 for the buccal canals, and 40/04 for the lingual canal (apical preparation), The canal were sequentially irrigated using sodium hypochlorite (Chloraxid 5.25%, Cerkamed, Poland) and 17% EDTA during the cleaning and shaping procedure. The canals were dried with sterile paper points, and Calcium Hydroxide (Ultracal, Ultradent.com) was used as intracanal medicament for two weeks, then a thorough superficial scaling was done allowing drainage through the pocket using ultrasonic and hand scalers. Irrigation was done using normal saline. An regimen of Augmentin one gram (Glaxo Smith Kline) and Ibuprofen 400 mg  (Ibuprofen Spimaco) was prescribed.

In the second appointment after two weeks, patient swelling subsided and the tooth was asymptomatic. The calcium hydroxide dressing was removed using (EDTA 17% solution) and NiTi hand K-files. The canals were irrigated again, dried with sterile paper points and the gutta-percha master cones (size 40, 4% taper for the lingual canal, size 35, 4% taper for buccal canals) were then cemented into the corresponding root canal with AH 26 sealer (Dentsply Maillefer, Ballaigues, Switzerland). The pulp chamber was temporary sealed with layer of Cavit (3M ESPE Dental AG, Seefeld/Oberbay,Germany), and light- cured glass ionomer filling material (Fuji II, GC, Japan). Final radiographs were taken to evaluate the quality of the performed endodontic treatment (Figure 3), and finally the tooth restored with amalgam restoration (Figure 4). The periodontal treatment was initiated three weeks after endodontic treatment, at this stage the acute inflammation was subsided and the gingiva appeared healthier and more easily handled. No significant changes were revealed in neither probing depth nor attachment level with no pus oozing. The tooth was Grade II mobility. 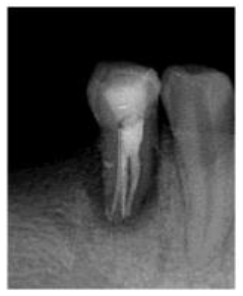 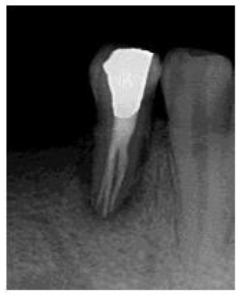 After long block local anesthesia a modified Widman flap was initiated from the area of the lower right first molar till the distal surface of the lower right canine according to the technique presented by Ramfjord and Nissle 1974 [25]. In this technique an scalloped initial inverse incision was done 0.5 mm away from the gingival margin to the alveolar crest, the gingival flap was reflected followed by crevicular incision was made from the bottom of the pockets to the bone. A third incision was made in the interdental space using Orban knife to remove a triangular wedge of tissue containing the pocket lining. Tissue tags and granulation tissue was removed with area specific curettes. The root surfaces were scaled and planned. DuraDox 100 mg capsule (Doxycline Julphar industries) was mixed with Oraxine mouthwash (0.2% Chlrohexidine Gluconate Riyadh Pharma) and topically applied on the exposed root surfaces and left for 10 minutes. Irrigation with normal saline was done followed by suturing using interrupted direct sutures done at each interdental space using non-resorbable black braided silk 3-0 (Mersilk Soie Ethicon) suture wire. Periodontal packing using surgical pack (Coe-PAK.GC America inc.) was done. DuraDox 100 mg was started 2 days preoperative and continued for 8 days postoperative according to Slots et al [26]. Ibuprofin 400 mg was used as anti-inflammatory agent for 5 days with Oraxine mouthwash twice daily for 3 weeks. The patient was seen after one week pack and sutures removed followed by irrigation using hydrogen peroxide with superficial scaling to remove food debris. The patient was asked to do gentle brushing of the area using soft toothbrush. The patient was seen weekly in the first month postoperatively then every 3 months thereafter for 1 year (Figure 5). At the follow up visits probing depth, attachment level and degree of mobility were within normal limit. 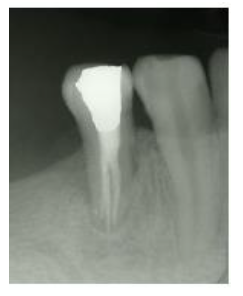 In conclusion it is essential to know that in perio- endo lesions, the endodontic treatment is the more predictable treatment, however, the success of such therapy is dependent on the completion of periodontal treatment and complete adequate management of both aspects is essential for successful long term results of such case.