Infective endocarditis is one of the most important complications in hemodialysis patient due to vascular access, mainly in patients with central venous catheter (CVC) and arteriovenous (AV) graft. Infective endocarditis is associated with a high mortality for this category of patients. We present the case of a 56-year old male in hemodialysis treatment since 2015. He had a thrombosis of the native arteriovenous fistulas, which was corrected using an arteriovenous graft prosthesis. After a period of several months, the graft was thrombosed and a percutaneous thrombectomy of thrombosed hemodialysis graft was performed. Three months later the patient was identified with an infection of the graft, and also developed secondary bacteremic staphylococcal pneumonia and further aortic valve endocarditis. Infective endocarditis is a complex disease with a high mortality. A particular attention to this complication is required for hemodialysis patients who are using an AV graft because immediate diagnosis and treatment it is associated with a successful management of the infective endocarditis complication. Prevention strategies on following strict asepsis protocols, from placing the access to its manipulation during dialysis sessions, would lead to a significant reduction of this life-threatening complication in patients with hemodialysis.

Chronic Kidney Disease (CDK) is a major health problem worldwide. The number of patients with end-stage renal disease (ESRD) that require renal replacement therapy treatment (RRT) is on the rise. This increase is a result of annually growing number of new cases combined with a decreased mortality rate among hemodialysis patients [1]. According to USRDS Annual data report, 63% of patients with ESRD in USA are treated with hemodialysis, 7% with peritoneal dialysis and 29.6% with renal transplantation (Renal 2). A well-functioning vascular access is a mainstay for patients treated with hemodialysis. There are three main types of access: arteriovenous fistula (AVF), arteriovenous graft and central venous catheter (CVC). The infections are the most common complications of vascular access. Recent studies have shown that the incidence of infections caused by the hemodialysis vascular access is highest when it is a central venous catheter and lowest when it is a native arteriovenous fistula used. For this reason, the nephrologists always recommend "fistula first, catheter last". Nevertheless, choosing the type of vascular access depend on the patient, as every patient has its own distinctive characteristics and the nephrologist in collaboration with the vascular surgeon should decide the best option for him/her. Infective diseases, including infective endocarditis (IE), are most the serious complications of hemodialysis patients [3]. They are described as one of the main causes of morbidity and mortality, after cardiovascular diseases [4]. The incidence of IE is estimated to be more than 300 cases per 100,000 people in hemodialysis, compared to three to nine cases per 100,000 in the general population [5]. Chronic hemodialysis patients have a significant risk for IE. The main sign and symptom in nearly 90% of cases is fever, usually accompanied by shivers, anorexia and weight loss. Fever in IE patients may vary, but patients are characterized by persistent bacteremia, regardless if they have fever or not. Others symptoms usually include: weakness, cephalic myalgia, arthralgia, dyspnea and night sweat [7]. Cardiac pathological noises are found in about 85% of the patients, while petechiae in 20-40% of cases. Septic embolism occurs in nearly 25% of causes, causing infarctions in the kidney, spleen, lungs, etc. Metastatic infections such as vertebral osteomyelitis, septic arthritis, psoas abscesses. Neurological complications occur in up to 40% of cases, including embolic strokes, intracranial hemorrhage, cerebral abscess, etc. Diagnosis is based on clinical data, hemoculture, and echocardiography. The management of infective endocarditis involves early diagnosis, antimicrobial therapy, and surgical treatment in more complicated cases [8].

Male patient, 56-years old, without significant past medical or family history was diagnosed in December 2015 with end stage renal disease after a hypertensive crisis. Under emergency conditions, the patient was immediately dialyzed for pulmonary edema and renal failure using the DEX Central Venous Catheter and thereafter a brachiobasilic arteriovenous fistula was placed. For almost two years the patients was hemodialyzed via arteriovenous fistula which was later complicated with a thrombosis of the proximal segment of the basilic vein. Reparation of thrombotic AV fistula was done with prosthetic arteriovenous (AV) grafts from the distal brachial artery to cephalic vein. Three months from its placement, graft was thrombosed again and thrombectomy was performed. Due to frequent thrombosis, the coagulation cascade was evaluated and excluded any pathology. In October 2018, the patient was presented for his hemodialysis session with fever, rash and mild edema in the area of the venous puncture of the AV graft. The patient was treated with antibiotic therapy (vancomycin) and the AV graft was not punctured. In his next session, the patient arrived in a deteriorated condition, complaining for chest pain, a productive cough and pain of the AV graft area. An immediate computed tomography (CT) was performed confirming the diagnosis of pneumonia which was due to staphylococcus aureus recording to hemocultures. Meanwhile, the AV graft function continue to deteriorate, the surrounding area developed abscess which was drained and antibiotic therapy was continued. A transesophageal echocardiogram (TEE) was performed to rule out endocarditis. As clear endocardial imaging for endocarditis were not found, the patient was scheduled for a reassessment depending on his clinical progress. The patient was treated with IV antibiotics for three weeks and was released from hospital with oral antibiotics for another week. Two days after, the patient presented in outpatient setting for dyspnea, discomfort and fatigue. During the second hour of the hemodialysis session, he started complaining of severe chest pain. Vital signs showed a heart rate of 95 beats/min, blood pressure of 135/67 mmHg, and a respiratory rate of 23 breaths/min, with a mild to moderate increase in cardiac enzymes in blood chemistry. In chest auscultation tachycardia was revealed, but no murmurs, rubs or gallops were appreciated. Electrocardiogram showed sinus rhythm with ST-wave depression in leads V4-V6. Echocardiography demonstrated diffuse moderate hypokinesis with decreased ejection function: EF = 45% with mild mitral valve regurgitation (Table1). Patient was taken to the coronary care unit for further examination. Coronary angiography revealed pathology of the secondary vessels. A Trans-Esophageal Echocardiogram (TEE) the day after revealed a 12 × 7.2 mm thickening on the aortic surface, consistent with vegetation of the aortic valve (Figure 1). 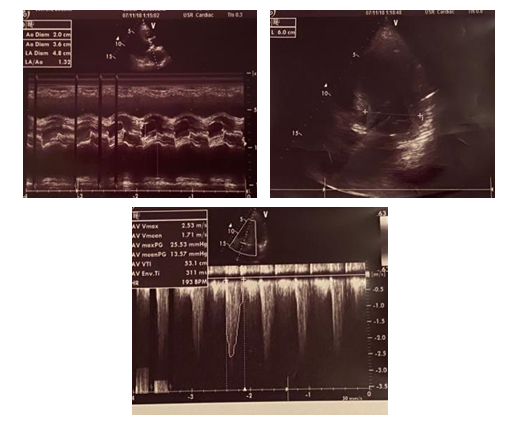 Based on the findings of TEE a cardiothoracic surgery consult was made and the patient was considered a suitable candidate for cardiac surgery. He underwent aortic valve replacement with a mechanical valve. The patients was in good condition following surgery and continued dialysis sessions throughout post operatory period with a jugular central venous catheter, while an arteriovenous (AV) fistula was performed on the other arm. The patient was discharged with oral anticoagulation. On follow-up, after one year, echocardiogram showed preserved EF (57%) and normally functioning mechanical prostheses. Currently, the patient continues to be in good clinical condition and in waiting list for the renal transplant.

Infective Endocarditis (IE) is a life-threatening complication in patients being treated with hemodialysis. The studies have shown that IE mortality of these patients is 30-60%, significantly higher compared with general population [9]. Dialysis patients are in a high risk of developing infections, especially in cases when they are using a central venous catheter (CVC) or arteriovenous (AV) graft as vascular access.

The location where the central line is placed is also related to a risk for endocarditis.

Figure 3: The progressive risk increase for IE according to the place where the catheter located

The source of bacteremia can be endogenous, the microbial flora of the patient's own skin, or exogenous, through the hands of personnel, materials and equipment used for development of the dialysis session. Predisposing factors include vascular access, valve calcifications and immune system of the patient. It has been shown that patients with central venous catheter and those with AV graft are at higher risk of bacteremia and IE, compared to patients with AV fistula [6]. The most common pathogen is Staphylococcus aureus (MSSA) with 33% of cases, of which 25% are Staphylococcus aureus methicillin resistant (MRSA). The left heart is the most frequent location of IE compared to the right side in hemodialysis patients. Our patient showed from the beginning an AV graft infection, and as a result was urgently treated with antibiotics and for staphylococcal pneumonia as well. Meanwhile, due to the high incidence of these cases complicated with endocarditis, TEE was performed since the first week of treatment but no data were initially found consistent with IE. However, the patient was under particular attention for this complication. In previous cardiac echocardiograms, the patient had no evidence of previous sclerotic-valve damage, regurgitation or stenosis, which would increase the probability of endocarditis. TEE was repeated again on day 5 as the patient was presenting deterioration of the general condition, after the continuous suspicion for the complication of the situation with the endocarditis, which subsequently confirmed vegetation on the aortic valve. The case was soon referred for surgery after he developed advanced aortic regurgitation, acute heart failure. According to the recommendations of the American Heart Association (AHA), indications for early surgery include cardiac valvular dysfunction which cause signs and symptoms of heart failure, patients who have developed aortic valve abscess or destructive penetrating lesions (fistula), perivalvular abscess, patients that due to IE have pathogens are difficult to be treated, such as fungi and multidrug-resistant organisms, patients with a persistent high fever even after a week of starting therapy with the appropriate antibiotics, large vegetation over 10 mm [10]. As infectious endocarditis is such a major complication, the prevention measures are quite important. Hand hygiene, seemingly the simplest habit, is considered practically the most important for reducing the chance of vascular access infection. Putting on gloves in no way should overlook proper hand hygiene. A 2% chlorhexidine solution is preferred for skin cleansing of vascular access. It is recommended to avoid the placement of the femoral catheter as a potentially high-risk source for infections, creating a stable team with standardized knowledge in terms of vascular access to dialysis, performing nasal cultures for Staphylococcus aureus in all young patients starting hemodialysis and use nasal mupirocin when indicated [11]. Performing an echocardiogram for new cases starting hemodialysis to rule out past cardiac pathologies. Patients with cardiac problems should be taking in consideration for closer monitoring [11]. The diagnosis of infectious endocarditis should be suspected in all patients with hemodialysis who have a fever, especially in those who have prosthetic graft or central venous catheter as vascular access.

Infective endocarditis (IE) is a complex disease with a high mortality rate. Careful attention of this complication in patients undergoing AV graft hemodialysis, early diagnosis and timely treatment, lead to a successful management of infective endocarditis in hemodialysed patients. International guidelines are of grade value in prevention strategies and following strict asepsis protocols, from creating the access to its manipulation during dialysis sessions, would lead to a significant reduction of this life-threatening complication in patients with chronic hemodialysis.