Ostrich (Struthio camelus) is a species belonging to the Struthionidae family of Struthioniformes order that does not have the flying ability among birds. The aim of this study was to make a subgross investigation on anatomical structures of middle ear in ostrich and to determine the morphometry of the columella.

In the present study, 4 adult ostrich heads were used in the study. Tympanic cavity and the formations inside are removed from the skull by protecting the cranial roof. Subgross examinations of tympanic cavity, columella and other anatomic structures were then performed, and morphometric measurements of columella and some anatomical structures were performed using a digital calliper.

It was determined that tympanic cavity, surrounded by ear capsule (os oticum), had a conical shape and was covered with mucosa that was tightly adjacent to the periosteum. Tympanic membrane, columella and osteochondral structures, ligaments, a branch of external ophthalmic artery and the presence of chorda tympani were detected in tympanic cavity. It was observed that columella was placed diagonally in tympanic cavity. The vestibular (proximal) end having a circular shape was found to have a large basis and annular ligament which ended up with thickened, small columns.

Ostrich is a kind of animal that does not have the flying ability among the birds [1]. Its classification was done by Linnaeus in 1758 and the name of the species is named as “Struthio camelus’’ [22]. The systematics of ostrich is identified as Phylum: Chordata, Class: Aves, Order: Struthioniformes, Family: Struthionidae, Genus: Struthio, Species: Struthio camelus birds [1] .

The organ of balance and hearing, known as vestibulocochlear organ in birds, have two distinct functions as in mammals. Membranous labyrinth, which contains the receptors responsible for regulating balance, muscular tonus, and hearing, is surrounded by ear capsule, which corresponds to petrous part and tympanic part of temporal bone in mammals. In the birds with well-developed sense of hearing, the ear is composed of three parts as external ear, middle ear and internal ear [8,12]. External ear is surrounded by a colourless white or acoustic disc and consists of a short external auditory meatus, which starts at external auditory canal and ends at tympanic membrane. Middle ear consists of tympanic cavity in the shape of a funnel that extends between tympanic membrane and internal ear [6,8]. Tympanic cavity filled with air is associated with pharynx also via pneumatic areas and auditory tube in cranial bones. Air flow is provided to the skull bones via the extensions from middle ear [6,8,12]. This modulation in middle ear balances the pressure between the atmospheric pressure and tympanic cavity, which is essential for the function of the tympanic membrane for conducting sound [6,8]. In order to the birds to adapt quickly to high pressure, auditory tube is short-formed according to the other living creatures and it directly opens to the pharynx via the infundibular cleft [15].

Morphometry is a research method which examines the shape differences and the correlations of these differences with other variations. Morphometry is a quantitative way of using mathematical shape analysis to reveal the variation in shape [4,16]. Conventional morphometry is the multiple variance statistical analysis application performed with quantitative (length, width, height) variables. Conventional morphometry is used to identify the variation of shape between and within the groups by using multivariate statistical tools with linear length measurements [10,21]. The differences in the development of the living being can be easily revealed by morphometric studies [20] .

In the literature review, a limited number of data regarding the morphology of middle ear in an ostrich has been found [2,9,17,19]. However, there are studies in which anatomical data and morphometric values regarding the auditory ossicles are determined in different animal species [5,7,11,13,14,18,23].

Studies of the anatomy of the middle ear in the ostrich are insufficient. In the studies performed in the middle ear of the ostrich, it was found that the morphometric values of the columella and cartilaginous extracolumella were restricted. Therefore the purpose of the this study is to make a subgross investigate on anatomical structures of middle ear in ostrich and to determine the morphometry of the columella and cartilaginous extracolumella.

Four adult and healthy ostrich heads were obtained from the poultry farm. The procedure of the study was approved by the Ethics Committee of Selcuk University Faculty of Veterinary Medicine (09/03/2017, 2017/27). In the research laboratory, the blood in the vessels was removed by giving 0.9% NaCl solution to the heads. Then, 10% formaldehyde solution was injected and the heads were kept in a formaldehyde pool for 15 days. After the fixation process, the skin and soft tissue were removed. Then, tympanic cavity and the formations inside were removed from the skull by protecting the cranial roof.

Tympanic cavity, columella and other anatomic structures were revealed by a stereo microscope (Nikon- SMZ-2T) and their subgross examinations were done.

Three protrusions in columella and osteochondral section were revealed and imaged. Also ascending ligament on the side of tympanic membrane facing external auditory meatus; basis connecting columella to oval window (fenestra vestibuli) in medial and annular ligament surrounding it circularly were revealed and imaged. After these processes, below mentioned morphometric measurements were performed by using the digital calliper (Showa 0-150 mm x 0.01 mm).

Anatomic terms used in this study were written by taking Nomina Anatomica Avium as a reference [3].

It was found that an ostrich did not have an auricula in the structure of its external ear and it has a short external auditory meatus. It was observed that the middle ear (tympanic cavity) was separated by tympanic membrane from the external ear. It was determined that tympanic cavity surrounded by ear capsule had a funnel-like shape and it was covered with mucosa that is adjacent to periosteum (Figure 1). 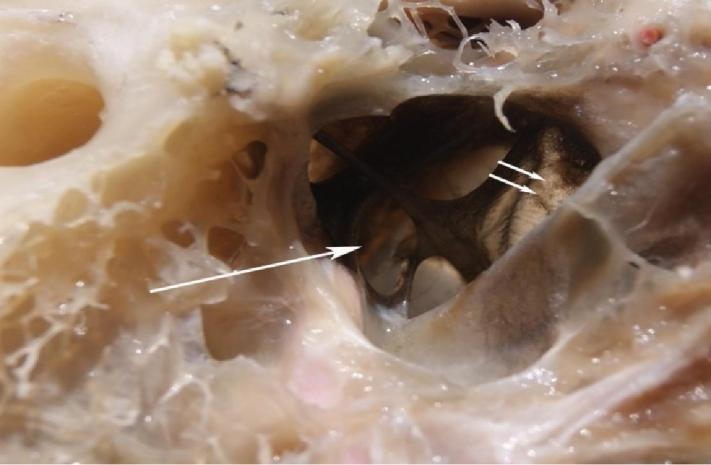 It was seen that ear capsule was bonded with lateral part of occipital bone, parietal bone and basisphenoid bone. It was found that osseous and osteochondral structure of columella, ligaments, a branch of external ophthalmic artery and chorda tympani are present within tympanic cavity. Columella corresponding to stapes bone in mammals was determined to be located in tympanic cavity in ostrich, have an osteocartilaginous structure, and to be only ossicle. It was observed that columella was placed diagonally in tympanic cavity. It was determined that the bone had Platner’s and ascending ligament and cartilaginous extracolumella providing the connection of the conical shaped tympanic (distal) end to tympanic membrane (Figure 2). 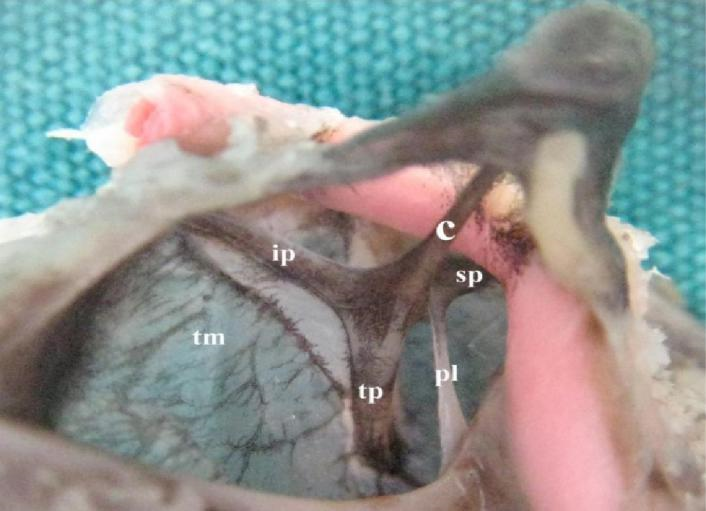 The vestibular (proximal) end having a circular shape that hung on oval window was found to have a large basis and annular ligament which ended up with thickened and small columns (Figure 3).

It was determined that the cartilaginous extracolumella, which connects columella to tympanic membrane, has three processes as tympanic process, superior process and infracolumellar process. These three processes were not included when measuring the length of the columella (Figure 4). It was determined that ascending ligament was clearly seen when tympanic membrane was viewed from lateral side and Platner’s ligament from the medial side. 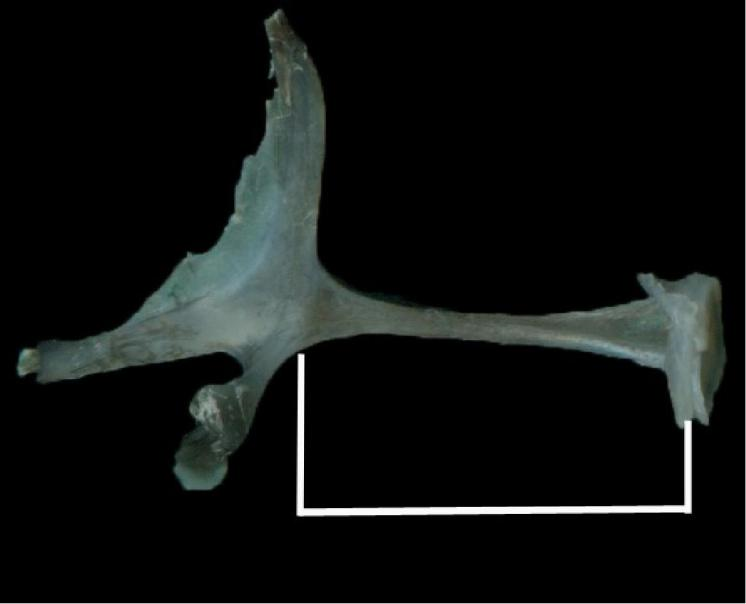 Figure 4: Measurement of the osseous section of columella.

Table 1-2 shows LC, LTP, LSP, and LIP values of the columella that was measured by a digital calliper in the study.

According to the results, it was determined that the infracolumellar process was the longest among three processes of cartilaginous extracolumella. It was observed that right and left columella length averages and min-max values were close to each other. In addition, it was resolved that the maximal difference between the right and left averages belonged to the tympanic process.

Ostrich is a kind of bird that does not have flying abilities among the birds [1]. Middle ear of birds consists of tympanic cavity in the shape of a cone that extends between tympanic membrane and internal ear [6,8].

In the study, it was determined that tympanic membrane, ligaments, three osteochondral structures, a branch of external ophthalmic artery and chorda tympani were present in tympanic cavity. Also, it was observed that columella was diagonally placed in tympanic cavity. It was found that the tympanic (distal) end of columella had a conical shape and had two ligaments and an cartilaginous extracolumella providing its connection with tympanic membrane. It was observed that the vestibular (proximal) end that hung on oval window of columella had a circular shape and a wide basis that ended with small columns and an annular ligament. It was seen that cartilaginous extracolumella has three processes as tympanic process, superior process and infracolumellar process. Arechvo et al expressed that ostriches had a single columella consisting of two sections and this was attached to tympanic membrane with three osteochondral processes. Similar to the present study, it was observed that tympanic process and superior process of the extracolumella ended in tympanic membrane but infracolumellar process penetrated tympanic membrane, left middle ear cavity, and ended in soft tissue in external auditory meatus. Similar to the results of the study, as stated by Deeming [6], an ostrich has a short external auditory meatus, and a rounded and oblique tympanic membrane. As specified by Saiff [17], external ophthalmic artery that is separated from internal carotid artery was detected in the medial of external auditory meatus. In the present study, it was revealed that a branch of external ophthalmic artery entered in tympanic cavity posteriorly and then it continued in the dorsal of columella.

Valdezate et al [19] expressed that distal end of columella in an ostrich was supported by a tripodal structure supported by tympanic membrane. In the present study, it was observed that the said tripodal structure was present at both the distal and proximal end of the columella. The same researchers specified that the total length of columella was 12 mm. In this study, osseous length of right-left columella was determined as 7.13 mm and 7.36 mm, respectively.

As a result, it can be stated that middle ear in an ostrich has similarities to other bird species and right-left mean length values of morphometric measurements were very close but it is necessary to conduct further studies by considering the gender and age factors. It is thought that the numerical data obtained in this study will eliminate the deficiency in this field and also be a resource for future studies in terms of determining the measurement parameters of columella.

A portion of this study, the abstract was presented in “1st International Veterinary Anatomy Congress of Turkey”.

Author’s declare no conflict of interest.