Lipoma-like Pleomorphic Adenoma of the Trachea

Endotracheal pleomorphic adenoma is an extremely rare disease. A 67-year-old Korean woman, who had complained of progressive dyspnea and wheezing presented with an endotracheal mass in the upper trachea on a chest CT scan. The tumor was removed by rigid bronchoscopy with diode laser ablation at the base. From histologic examination, the mass consisted of extensive mature fat tissue (about 80% of tumor volume) and strips of usual pleomorphic adenoma with diverse histology. Nuclear atypia or mitotic activity of epithelial cells was not identified. Therefore, it was diagnosed as lipoma-like pleomorphic adenoma. Lipoma-like pleomorphic adenoma arising in the trachea is an extremely rare condition. To the best of our knowledge, this is the first such trachea case reported in the English literature.

Pleomorphic adenoma is ‘‘a circumscribed epithelial tumor which consists of clearly recognizable epithelial tissue that is intermingled with mesenchymal tissues of mucoid, myxoid, and chondroid.” [1]. The term “pleomorphic” refers to both the histogenesis and histology of the tumor. As the term “pleomorphic” shows, the tumor is characteristic of the diversity of the histology. Lipomatous component focally can be included in pleomorphic adenoma. Extensive lipomatous change of the tumor is, however, a very rare finding in pleomorphic adenoma, and only a few such cases have been reported in the literature [2-5]. These all arose in parotid glands, and lipomatous changes are often observed in the normal parotid glands of adults as they age. However, there is little fatty tissue in the trachea, so lipoma-like pleomorphic adenomas arising in the trachea are extremely rare. To the best of our knowledge, this is the first such trachea case reported in the English literature.

A 67-year-old Korean woman presented to her primary care physician with progressive dyspnea, productive cough, and wheezing during about 10 years. She had been treated for asthma. Her chest roentgenogram was unremarkable, except for evidence of inactive old tuberculosis on the right upper lobe of the lung and mild focal thickening of the right pleura. The patient denied personal tobacco use, but consumed alcohol and had longtime exposure to secondhand smoke. In her past significant medical history, she underwent low anterior resection of the left colon at another local university hospital 3 years ago due to sigmoid colon cancer. But there was no radiologic evidence of recurrence from a computed tomography (CT) scan of the abdomen. Otherwise, she was in no acute distress and had no labored breathing. No abnormal findings were evident from laboratory tests. On pulmonary function test, moderate obstructive pattern, normal lung volume, and mild reduction in diffusion lung capacity for carbon monoxide were noted. A CT scan of the thorax showed a tumor confined to the upper trachea, in its right lateral wall (Figure 1A). Flexible bronchoscopy performed under conscious sedation revealed a polypoid, hypervascular sessile tumor arising from the right lateral wall of the upper trachea occluding approximately 90% of its lumen (Figure 1B). To resolve the patient’s respiratory difficulty and her symptoms, we scheduled an immediate rigid bronchoscopy under general anesthesia to remove the endobronchial tumor. The tumor was resected with a mechanical debulking procedure using the sharp bevel of a rigid tube (Karl Storz, Tuttlingen, Germany). Thereafter, the base of the endobronchial tumor was ablated with a diode laser (Ceralas D50, Jena, Germany) to prevent recurrence. The removed endobronchial tumor was a 15 mm × 20 mm-sized oval-shaped mass (Figure 1C). 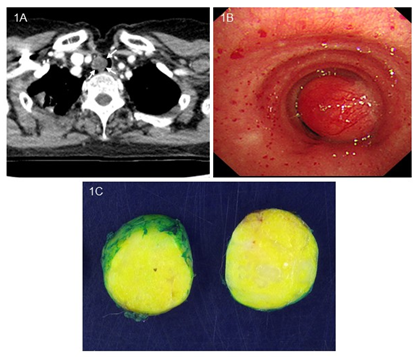 Figure 1: (A) Computed tomography scan of the chest revealing endotracheal soft tissue mass (white arrow), protruding into the lumen of the upper trachea. (B) Flexible bronchoscopy revealing a polypoid sessile tumor with a wide-based pedicle arising from the right lateral wall of the upper trachea. (C) Gross finding of the tumor (cut surface) showing about 2 cm-sized well-circumscribed tumor with a lipoma-like yellowish cut surface.

On histologic examination at low power view, the tumor consisted of a bland, basaloid epithelial proliferation against extensive fatty stroma and focal hyalinized fibrous tissue (Figure 2A). Proliferating epithelial cells were growing in orderly cords with multifocal areas of squamous differentiation, tubules, and frequent cribriform structures (Figure 2B), and they gradually merged into the surrounding mesenchymal tissues. At a glance, the cribriform structures were reminiscent of the growth pattern of adenoid cystic carcinoma. On high power view, cribriform nests were composed of two cell types; that is, cuboidal cells with eosinophilic cytoplasm and vesicular nuclei lining true ductal structures and small cells with scant cytoplasm and basophilic nuclei with finely stippled chromatin (Figure 2C). There was also no evidence of vascular or perineural invasion. Peripherally, the tumor showed focal involvement of the resection margin. Nuclear atypia or mitotic activity of epithelial cells was not identified. Adipocytes were univacuolar in shape, and neither lipoblasts nor malignant findings were identified. In some areas, the cells showed a transition with adjacent stromal myoepithelial cells (Figure 2D). 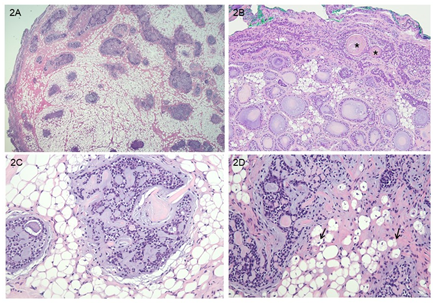 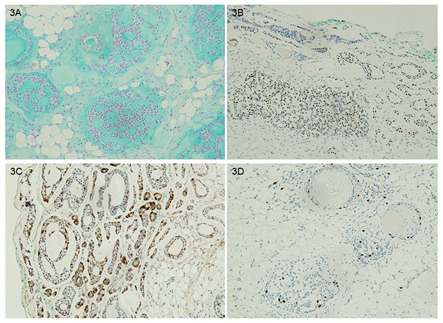 The postoperative course was uneventful, and the patient was discharged the second day after the procedure. Follow-up bronchoscopy with a biopsy 3 months later revealed a small scar-like area of tissue at the removal site. Its pathologic report showed it to be a residual pleomorphic adenoma that reflected a marginal involvement at the initial tumor resection. About 11 months later, the patient was well without evidence of recurrence.

Primary tumors of the trachea account for 0.2% of all airway neoplasms, affecting 0.1/100,000 individuals per year. Ninety percent of these lesions in adults are malignant, with squamous cell carcinoma and adenoid cystic carcinoma being the commonest [6]. So, benign tumors in the trachea, which include xanthogranuloma, pleomorphic adenoma, etc. are very uncommon, with an incidence of 0.26 per 100,000 population [7].

Pleomorphic adenoma, which is the most common benign tumor of the parotid gland, rarely develops in the trachea, with less than 50 patients being reported in the literature up to 2016. The average age of these patients was 48 years old (range, 26–71 years old) and the sex distribution was almost equal [8]. Nearly half of these tumors were located in the upper third of the trachea as in the present case, and 12% were located in the lower third. Like other tracheal tumors, pleomorphic adenoma often leads to obstructive symptoms such as dyspnea and wheezing. These symptoms mimic those of asthma and therefore may result in a delay of primary diagnosis, as in the present case [9]. Although extremely rare, tracheobronchial pleomorphic adenoma may present with great clinical significance due to its interruption of breathing [8]. Chest roentgenograms are not helpful because the tumors are rarely visualized [10]. CT and magnetic resonance images of the thorax have a diagnostic yield of up to 90% and also allow for the evaluation of near and distant structures, so play an essential radiological role in its diagnosis [9, 10]. Flexible bronchoscopy remains the gold standard for diagnosing tracheal tumors. A precise evaluation of tumor characteristics, localization, and extension can be made by a bronchoscopic examination, along with the possibility of biopsy sampling [11]. Thus, both CT and flexible bronchoscopy play a central role in diagnosis and treatment planning. Histologically, the tumor is characterized by neoplastic proliferation of parenchymal glandular cells along with myoepithelial components. It generally grows slowly and lacks a complete capsule [12]. The most interesting point in the present case was that a large part of the tumor parenchyma was replaced by lipoma-like fat tissue. Similarly, in 1999, Seifert et al. [3] coined the term lipomatous pleomorphic adenoma for an otherwise typical pleomorphic adenoma with adipose tissue components occupying more than 90% of the tumor. Fat contents of the present case were abundant, but the amount approximated less than 90% of the tumor. So, we named this case lipoma-like pleomorphic adenoma. Although foci of adipose tissue are sometimes encountered within the stroma of pleomorphic adenoma, extensive replacement by adipose tissue as in this case is regarded as a very rare finding. Differential diagnosis concerning lipoma (pure lipomatous tumor) in particular is essential. The existence of an epithelial or myoepithelial component is a diagnostic clue [13]. From a histopathological point of view, a correct diagnosis is not difficult, with presences of the islets of typical ductal and myxochondroid structures. However, diagnostic problems may arise when a bronchoscopic fine needle aspiration specimen contains only adipose cells, and the tumor thus may be misdiagnosed as a lipoma.

Because pleomorphic adenoma of the trachea, including the present case, rarely occurs, standard management has not been established. In general, endoscopic resection or surgical segmental resection is selected as a treatment on the basis of tumor status and physician preference. Endoscopic removal may be used when rapid respiratory symptom improvement or hemorrhage control is required. Segmental resection is the only curative treatment for this tumor, and can decrease the possibility of local recurrence [3, 16].

Lipoma-like pleomorphic adenoma of the trachea is considered an extremely rare tumor. In this benign tumor, we suggest that abundant fatty contents would be derived from lipocytic metaplasia of stromal myoepithelial cells. As with other tracheal tumors, obstructive respiratory symptoms could mimic asthma and may cause a delay in the diagnosis with ordinary anti-asthmatic treatment. At this point, CT and flexible bronchoscopy help in confirming the diagnosis and treatment planning. Surgical resection is considered a traditional treatment of choice; however, less-invasive rigid bronchoscopic resection with careful observation could also be a treatment option.

Contribution of the Authors

All authors have read and approved the final version of the manuscript.

This research was supported by a 2-year research grant from Pusan National University. The funder of the study had no role in the study design, data collection, data analysis, data interpretation, or writing of the manuscript.

Ethics Approval and Consent to Participate