Purpose: the goal of this paper is to share our experience with the use of mega knee-prosthesis as a treatment option for complex DFF in the elderly patient and do a review the literature.

Methods: we operated 4 patients with complex DFF using a mega knee-prosthesis. All patients were operated by one senior surgeon. No patients were lost at follow-up. One patient died 7 months after the surgery from flu. All patient were female and the average age at the time of the surgery was 79, 5. Clinical outcomes were measured through the WOMAC, Oxford knee score and pain NRS. Post-operative autonomy was measured using the Parker score. A follow-up radiographic analysis was performed independently by the surgeon and a radiologist.

Conclusion: The use of cemented knee mega-prosthesis for complex intra-articular distal femoral fractures is a viable treatment option in elderly patient with osteoporotic bone as it allows immediate full weight bearing and a rapid return to pre-operative functional status.

Distal femur fracture (DFF) account for 0,4% of all adult fractures and 3% of femoral fractures. The annual incidence is 4,5 per 100.000 adults with a male-to-female ratio of 1:2. They typically present in a bimodal distribution as either young male patients with high-energy trauma or elderly female patients with low-energy trauma related to osteoporosis [1]. Supracondylar fracture of the elderly can be very challenging to treat and total knee replacement is often not considered. Mega-prosthetic implants were first introduced in oncological orthopedic surgery as a treatment for tumors requiring massive bone resections [2]. Osteoporosis, comorbidities and lower pre-injury activity of the elderly alter the outcome of ORIF compared to a younger population [3-4]. The goal of this paper is to share our experience with the use of mega knee-prosthesis as a treatment option for complex DFF in the elderly patient and do a review the literature.

From September 2015 to October 2019, we operated 4 patients with complex DFF using a mega knee-prosthesis. All patients were operated by one senior surgeon. No patients were lost at follow-up. 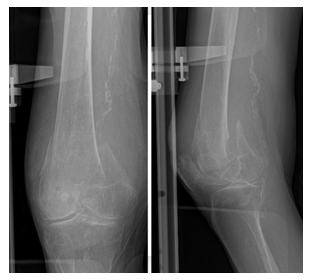 One patient died 7 months after the surgery from flu. All patient were female and the average age at the time of the surgery was 79, 5 (range, 69 to 95 years). The Arbeitsgemeinschaft für Osteosynthesefragen/Orthopaedic Trauma Association (AO/OTA) classification was used to classify the fractures [5]. All patients had computed tomography scan preoperatively that showed DFF AO33C3 with severe comminution (Figure 1). None of the knees were previously operated. All patients were autonomous pre-operatively and lived at home. All patients had osteoporosis and 2 patients had underlying knee arthritis.

The surgery was on average done 6,5 days after the trauma (range, 6 to 7 days). 3 patients were immobilized by an extension knee brace prior to surgery and one benefited from an external fixator of the knee on the day of the trauma. Clinical outcomes were measured through the WOMAC, Oxford knee score and pain NRS. Post-operative autonomy was measured using the Parker score. A follow-up radiographic analysis was performed independently by the surgeon and a radiologist.

The surgery was performed under general or spinal anesthesia combined with nerve blocks. A tourniquet was placed but not inflated. Patients received 1g of intravenous tranexamic acid 30 minutes prior to the incision. A standard midline incision and medial parapatellar approach were utilized for all surgical procedures. The implant used for all cases was the cemented OSSTM Orthopaedic Salvage System (Zimmer Biomet, Warsaw, Indiana, USA) (Figure2). 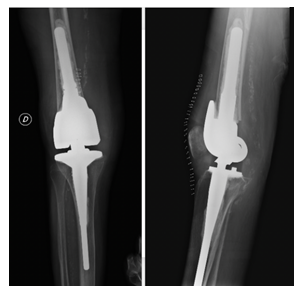 Figure 2: Postoperative plain radiographs of the right knee after treatment by knee mega-prosthesis.

Physiotherapy was started on the first day after the surgery, with mobilization of the knee in bed and walking as soon as possible. All patients were permitted to bear full weight postoperatively and had to use a walker during the hospital stay. All patients were instructed to take enoxaparine 40mg once a day for 30 days for postoperative chemoprophylaxis against venous thromboembolism. Clinical and radiographic evaluations were made at 2 weeks, 6 weeks, 6 month and 1 year after the surgery. For the purpose of this paper all patients were convoked for clinical and radiological assessment.

One patient suffered from a urinary tract infection treated with antibiotics. 3 patients had postoperative anemia that required blood transfusion. One patient was confused for 3 days following surgery. Neither mechanical nor implant related complication occurred to this day.

It has been accepted and demonstrated for quite some time that better results and fewer complications were achieved with surgical treatment for displaced DFF compared with conservative treatment as Butt and al. showed in 1996 [3]. Different fixation techniques such as plating, intramedullary retrograde nailing and external fixation have been described and validated for the treatment of DFF [6]. Locking plated inserted using a minimally invasive percutaneous plate osteosynthesis (MIPPO) approach is now the most common treatment method and shows better results for complications occurrence and union rates [7].

But the management of the elderly population with supracondylar fractures continues to pose a challenge compared to younger patients. A retrospective study by Henderson and al. analyzing the complications of locked plating for DFF showed 20% of non-union and 27% of re-operation for a population with a mean age of 60 [8]. The use of tumor endoprosthesis for DFF has been described for the first time in 1982 [9] and the first studies were published in 1992 [10-11]. To our knowledge just a handful of studies regarding the management of DFF of the elderly with knee mega-prosthesis have been published since. Pour et al. [12] concluded in their retrospective study that rotated hinged prosthesis should be considered as a salvage device and should be used primarily for the elderly and sedentary patients with complex knee problems.

We agree that their use in traumatology shouldn’t be routinized but this technique can also benefit active elderly patients for whom immediate full-weight-bearing could diminish a loss of autonomy and complications due to prolonged decubitus such as bedsores, thromboembolic disease, pneumonia, loss of autonomy and sarcopenia [3]. We used this technique for elderly autonomous patients with complicated DFF, osteoporotic bone and preferably with radiological signs of arthritis.

Osteoarthritis following ORIF of intra-articular DFF can occur in up to 50% of the patient at 6 years follow-up [13-14]. For this reason, the OSSTM could be used for DFF on knee without osteoarthritis. Freedman et al. [15] published a study on 8 DFF with a mean follow-up of 49 month. They reported similar results to ours with a good radiologic outcome and a mean range of motion of 114, 3 degrees. In a study published by Bettin et al. [16] the mean WOMAC score at 1.7 years follow-up on average was 23.1 which are similar to our results of 17.25. High rates of complications associated with the use of knee mega-prosthesis for nonneoplasic surgery are found in the literature with 22% of patellar instability [17], up to 20% of aseptic loosening and deep infections ranging from 14,5 to 19,2% [12, 17].

In our case series the only surgery related complication that occurred was postoperative anemia. However longer follow-up is needed to asses long-term complications such as aseptic loosening and deep infections. As Bettin et al. [16] rightfully mentioned in their article, the cost of the mega-prosthetic implant is significant but might still be cheaper that a failed ORIF requiring additional hospitalization and revision arthroplasty components. Limitations of this study included those inherent to its retrospective design, the low number of patients, the relatively short follow-up and the lack of control group for comparison. A prospective, randomized trial comparing the use of primary cemented knee mega-prosthesis and MIPPO locked plating is needed to address the merits of each method.

The use of cemented knee mega-prosthesis for complex intra-articular distal femoral fractures is a viable treatment option in elderly patient with osteoporotic bone as it allows immediate full weight bearing and a rapid return to pre-operative functional status. Because of the high rates of complication found in the literature, patients should be carefully selected.

The authors declare that they have no conflict of interest.

There is no source of funding.

This article does not contain any studies by any of the authors involving human or animal participants.

Informed consent was obtained from all individual participants included in the study.