Ischemic Stroke; A Severe Complication In Patients Admitted To Resuscitation

Stroke is a real public health problem because of its incidence and morbimortality. Ischemic stroke (AVCI) accounts for 80% of strokes. It is the third leading cause of overall mortality in industrialized countries, after heart disease and cancer, and the leading cause of physical disability acquired. The objective of our study was to describe the clinical characteristics, and factors of Cardiovascular Risk (LRIF) and the factors associated with death in patients admitted for stroke (AVCI) and them in a resuscitation ward.

Methods: Retrospective study over a 12-month period (between January 1, 2018 and January 1, 2019), conducted in the medical-surgical emergency room.

Conclusion: Ischemic strokes have a major public health impact in terms of mortality or morbidity because of the physical and psychological consequences they can cause. The management of cardiovascular risk factors, the first of which is the HTA, keeps its interest with the peculiarity of diabetic balance and the cessation of tobacco in combination with a diet. Cardiovascular assessment (ACFA, HAG, HVG) plays an important role in stroke management. Primary and secondary stroke prevention requires the prevention of thromboembolic accidents (ACFA) Stroke remains a challenge.

Stroke is a sudden onset focal neurological deficit (onset in less than 2 minutes) in relation to a brain parenchyma lesion by heart attack or hemorrhage secondary to a cerebral vascular pathology of arterial or venous origin the first cause of acquired motor impairment in the adult.The third leading cause of death after cardiovascular disease and cancer. On distinguish 2 type of stroke 1 stroke [1, 2, 3, 4]. schemic (85% of cases) composed of

And hemorrhagic stroke (15% of cases)

If the NIHSS score is 15: there is a high probability of having a poor prognosis in 3 months.

1.2.3Risk Factors: [5] The risk factors for IVUS differ from those of hemorrhagic strokes, although some of them are common both.It is classic to separate riskfactors into modifiable and non-modifiable factors.

Non-modifiable risk factors are generally common between AVCI and hemorrhagic.

1.3.2 Sex:[6] Male does not appear to be a major factor in the occurrence of a stroke unlike coronary heart disease, but the data are divergent.However, the incidence of stroke is higher in men than in women.However, because of the higher life expectancy for women, the absolute number of strokes is higher for women than for men.

1.3.3 Ethnic factors:Have also been identified.For example, the Manhattan registry showed twice as high an incidence of IC and CI in individuals of African and Hispanic descent as among Caucasians In addition, the incidence of HFCs is higher among Asian.Socio-economic and cultural factors may be responsible for differences in the prevalence of risk factors observed in these populations, as well as genetic variations that have yet to be identified. A paternal or maternal family history of strokedoubles therisk.Apart from the rare monogenic diseases, there may be complex interactions with sex, unexplained by conventional genetic transmission.For example, women with a transient IC or ischemic accident (TIA) were more likely to have a maternal than paternal history of stroke, while in men, maternal and paternal history had the same prevalence.

1.4.3 Hyper cholesterolemia:[9] HDL cholesterol is a very high protein fraction, especially ApoA1.There is an inverse relationship between HDL cholesterol levels and IC risk that may be higher in atherosclerosis-related accidents.

The role of female hormones in the occurrence of cerebrovascular pathology has also been studied.Thus, oral contraception is associated with an increased risk of ICwith a relative risk of between 2 and 4. For example, the risk of cerebral infarction due to atrial fibrillation also increases significantly with age, from 1.5% in subjects aged 50 to 59 to 23.5% in the 80-89age group.

This is aretrospective, descriptive study, conducted in the medical and surgical emergency room (UMC) over a 12-month period (January 2018 and January 2019).

Being hospitalized during the UMC study period for an ischemic stroke defined according to WHO criteria.

Descriptive data analysis is based on transforming variables: by grouping using either coding or conditional transformations for tabulation and analysis.

2.5.2 Bivariate analysis: It is used to find the association between two independent variables, or between a dependent variable (to be explained) and other independent (explanatory) variables. The tests used are: the ?² test for independence or homogeneity, corrected by YATES, the exact test by FISHER, the KRUSKALL-WALLIS test for two groups, with the determination of the significance levels. STUDENT's test for two independent samples and analysis of variance (ANOVA) were used for the comparison of variables continuing. For the bivariate analysis, the comparison of interrupts variables between groups was carried out by non-parametric tests, the conformity and homogeneity test for the search for statistical associations between two qualitative variables; Fisher's exact nonparametric test for comparison of small groups. We used Pearson's correlation tests to estimate the relationship between two quantitative variables. A relationship is considered significant.

3.2.2 The cardiac assessment has admission: Para clinical cardiac evaluation (electrocardiogram and echocoeur) objective a complete arrhythmia by atrial fibrillation (AC/FA) in 11.4% of cases, left atrial hypertrophy in 40% of cases and left ventricular hypertrophy in 79% of cases(Figure 5). 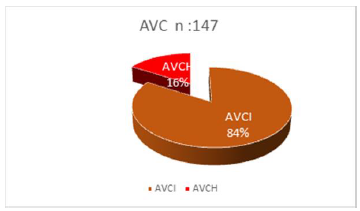 Figure 1: Distribution of patients by type of stroke. 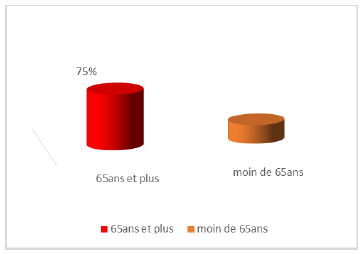 Figure 2: Distribution of patients by age. 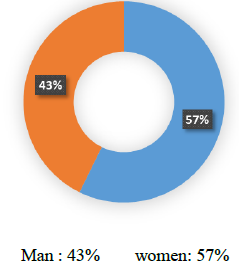 Figure 3: Distribution of patients by sex. 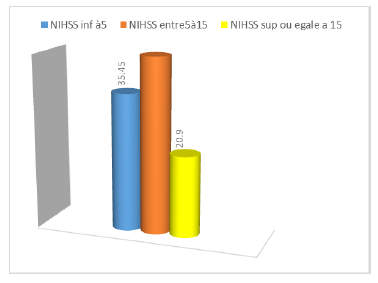 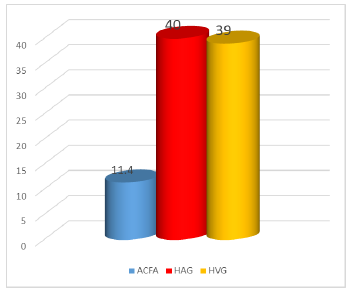 Figure 5: Percentage of patients by cardiac assessment at admission.

According to the literature, Elderly people are particularly vulnerable to stroke when atrial fibrillation

is present [13], the frequency of strokes after 65 years

The incidence of DALY was also higher in men than in

women, according to the literature [16, 17]. the majority

The main risk factors of our study were significant:

arterial hypertension, diabetes, cardiac embolism, for others the risk factors considered significant in several studies that we did not find such as, tabas, obesity, dyslipidemia, and alcohol. Hypertension as the main risk factor is described everywhere [19, 20].

In our study, the mortality was 20%. This is consistent with most studies which have reported that the disparity in this rate is significant around the world with figures ranging from 10 to 30% [1]. Three risk factors associated with the poor prognosis: NHISS - 15 (p - 0.0001), anisocoria (p - 0.006) and long stay in intensive care (p - 0.013) our results are consistent with the literature because several authors have observed that: Anisocoria is considered to be a potentially fatal bad factor reflecting brain engagement [16, 19]. The most reliable neurological parameter of mortality is the NIHSS awareness score by the NIHSS score. Indeed [21].

This prevention must be primary and secondary and involves the prevention of thromboembolic accidents. Anisocoria and depth of consciousness disorder predisposes to fatal evolution of AVCI

The authors do not declare any conflict of interest.