Is Clathrin Involved in Internalization of The Small Molecule Berberine by Primary Mouse Mast Cells?

The internalization and endocytosis of small molecules is a process that relies on either passive diffusion across the cell membrane or active transport through complex endocytic pathways such as pinocytosis. Using the fluorescent benzylisoquinoline compound berberine (BBR) as a tool, we analyzed the internalization of this small molecule by differentiated mouse bone marrow-derived mast cells. Our recent data showed that internalization of this compound was energy-and time-dependent and was increased when cells were treated with the differentiation cytokine, interleukin-3 (IL-3). In this commentary, we examine some of the possible mechanisms of internalization and provide further data to show that this process is partially dependent on clathrin-mediated endocytosis. Our hypothesis is that BBR internalization may utilize several pathways of internalization depending upon cell activation and proliferation.

Mast cells (MCs) are haematopoietically-derived secretory immune cells that release preformed as well as de novo synthesized inflammatory mediators in response to activation by several stimuli in a highly controlled process of exocytosis [1, 2].  Based on their role in inflammatory responses, MCs provide a convenient and effective target for anti-inflammatory therapeutic strategies. Since drug delivery applications to inflammatory cells is challenging and depends upon complex endocytic processes, it is imperative to better understand mast cell internalization of inhibitors or therapeutic drugs.

Berberine (BBR), a naturally occurring small 3.7 KDa benzylisoquinoljne compound, is anti-inflammatory, immune regulatory, hypoglycemic, lipid lowering and hepato protective in some in vitro and in vivo models [3-10]. Particularly in MCs, in addition to being utilized as a cost-effective method for staining MC-heparin [11, 12], it has been shown to have profound anti-inflammatory properties [13]. Despite having multiple pharmacological effects, the underlying molecular mechanism of BBR internalization into cells, especially allergic inflammatory cells such as MCs, has not yet been elucidated. In a recent study, we showed that BBR internalization by terminally differentiated bone marrow derived mouse mast cells (BMMC) was an energy-dependent process [14].

Our results showed that metabolically active BMMC internalized BBR but this internalization was significantly reduced when BMMC were fixed with methanol, suggesting that energy-dependent active transport is required for BBR to cross the cell membrane. By utilizing a variety of inhibitors of the receptor mediated endocytosis pathway, we further showed that BBR is internalized via phosphoinositide 3-kinase (PI3K) activation, a feature of the autophagy-associated endocytic pathway. One of the most unexpected observations of our study was that activation of BMMC by a hematopoietic growth factor, interleukin 3 (IL-3), further facilitated BBR internalization, suggesting that the process was dependent on actively dividing healthy cells. In this commentary, we add further data to suggest that this internalization process is only partially dependent on clathrin-mediated endocytosis and may be dependent upon other endocytic pathways.

2.1 Berberine’s endocytosis by BMMC may be partially dependent upon clathrin

In our recently published study [14], BMMC were treated with BBR for up to 45 hr, resulting in a time-dependent uptake of BBR and we characterized the mechanism of BBR internalization up to 24 hr. In this report, we further characterized the internalization process of BBR after 24 hr, showing significant internalization (Fig. 1A, 1B- upper panel) at 45 hr, but not when the cells have been fixed with methanol (Fig. 1B, lower panel), supporting our initial observations that this internalization process is not a passive process. And similar to our recently published data at 24 hr, internalization of BBR is still inhibited by inhibitors of actin polymerization (latrunculin B and cytochalasin B), phosphoinositide 3-kinase (PI3K, 3-methyladenine) and endolysosomal pH (chloroquine) (Fig. 1C, D) at 45 hr.

One of the ways in which compounds can enter cells is through clathrin-dependent endocytic pathways. Chloropromazine, a cationic amphiphilic drug that inhibits the function of one of the key adaptor proteins AP2 in clathrin mediated endocytosis [15], slightly decreases BBR internalization at 24 hr (Fig. 1E, F).

Although this decrease is significantly less (6.8%) than the inhibition of BBR internalization observed when BMMC were pretreated with 3-methyladenine or other endocytic inhibitors (86-91%) for 24 hr [14].  These results suggest that BBR endocytosis might be partially dependent upon clathrin-mediated endocytosis, but that the majority of BBR is entering the cells through a clathrin-independent mechanism such as pinocytosis. It is also possible that BBR (3.7 KDa) endocytosis is dependent on caveolin, since other small macromolecules such as insulin (5.8 KDa), albumin (66.5 KDa) and folate receptor (29.8 KDa) follow a similar process of internalization [16, 17]. Caveoles are involved in various receptor-mediated intracellular transport processes including potocytosis, transcytosis and endocytosis. Caveoles are cholesterol rich, hydrophobic membrane domains that are small uncoated plasmalemmal vesicles characterized by the presence of caveolin protein.

Our data shows that that methanol fixation of BMMC substantially reduces BBR internalization [14] even after 45 hr (Fig. 1B-lower panel). Since, methanol fixation extracts cholesterol, the integral structural component of caveole, from the plasma membrane, these results suggest that caveolin might be involved in BBR’s endocytosis. Future investigation by utilizing specific sterol binding agents such as filipin or nystatin and detergents such as digitonin that water solubilizes lipids, might shed more light into the involvement of caveole-mediated endocytosis of BBR into BMMC. Caveoles have been shown to play an important role in mast cell biology [18, 19]. Escherechia coli enters mast cells using a caveolin-dependent endocytic pathway [20]. This endocytic pathway precludes the possibility of fusion with the endolysosomes where the bacteria can be killed and degraded due to the acidic pH conditions. This is particularly important in the context of immune cells where pathogens can enter and seek refuge from the acidic endolysosomal compartments [21]. 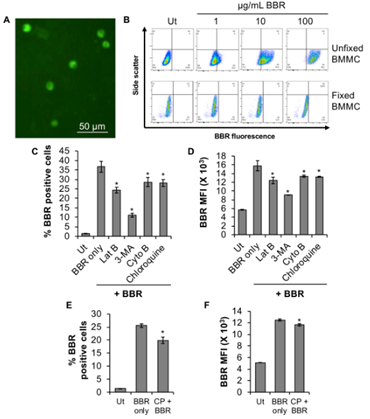 Figure 1: Berberine’s endocytosis in BMMC is partially dependent upon clathrin.

Our recently published data showed that IL-3, a hematopoietic stem cell differentiation factor, promotes BBR internalization [14] and we hypothesized that this many be dependent upon cell cycle progression. Although never shown directly on BMMC, IL-3 promotes cell cycle progression of C-63 cells [22]. C-63 is a primary erythroid/mast cell factor-dependent cell line developed from murine bone marrow as described by Wendling et al [23]. Therefore, it is possible that BBR internalization may be increased as cells enter the cell cycle.  The cell cycle plays a key role in endocytosis [24] and our understanding of endocytosis is biased towards actively dividing cells. As constant proliferation is not a physiologically sustainable process, the majority of the cells in an adult human body are not actively proliferating [25] and once a cell reaches full differentiation, it is thought to enter a phase of quiescence.

During differentiation, dividing cells exit the cell cycle either reversibly to become quiescent (G0 state) or irreversibly to become terminally differentiated. If they become quiescent, they may reach a state of senescence. It is possible that fully differentiated cells such as BMMC have reached a stage of partial quiescence and are therefore less likely to initiate endocytosis and are resistant to drug delivery via active-transport mechanisms. Activating BMMC with a growth factor to promote proliferation could re-engage these endocytic pathways. In our recently published study we found that IL-3 activation of fully differentiated BMMC enhanced BBR endocytosis [14], presumably by inducing a greater number of cells into the proliferative phase of the cell cycle. Proliferating cells progress through interphase and divide during mitosis [26]. In a typical asynchronous proliferating cell culture ~98% of the cells are in interphase while ~0.5-2% cells usually undergo mitosis [27, 28]. Endocytosis primarily occurs during interphase (G1, S and G2 phases of the cell cycle), although it might sometimes vary depending upon the cellular context [25].

Since BMMC are end-stage differentiated primary cells, only a small percentage of resting cells are likely to be in the S+G2/M phase at any one time, thus only a small population of cells is likely to be permissive to endocytosis of BBR. Our published data showed that IL-3 stimulation of mature BMMC proliferation augmented BBR endocytosis [14], suggesting that increasing the rate of proliferation, and thus pushing the cells into the proliferative stages of the cell cycle (likely the interphase), promotes BBR endocytosis. We hypothesize that IL-3 stimulation induces a greater proportion of partially quiescent BMMC into the proliferative stages of the cell cycle which are more permissible to active transport mechanisms such as endocytosis.

IL-3 is itself internalized when bound to the IL-3 receptor (IL-3R) via clathrin-dependent endocytosis [29]. Hence, it is possible that BBR uses this process as a Trojan horse to internalize into BMMC. If this is the case, one should expect that the percent BBR positive cells should increase with IL-3 treatment. However, our published data indicated that although BBR internalization increases in a sub-population of cells that likely are pushed into the proliferative stages of the cell cycle, the percentage of cells that had internalized BBR had remained the same [14]. In other words, the same population of cells that had internalized BBR without IL-3 treatment increased their uptake of BBR in response to IL-3 treatment by 24 hr [14].

Moreover, IL-3 was not found to potentiate BBR endocytosis by 3 hr [14]. It suggests that this process takes time and indeed, our data indicates that BBR endocytosis is not immediate and requires at least 4 hr to observe significant internalization (16.3% relative to untreated, Ut with a background BBR fluorescence of 1.17%, Fig. 2). This process is likely to require protein synthesis or structural reorganization within the cell, further supporting the observation that this is not an immediate process but requires time. Further analysis of this endocytic pathway is required, using specific knockouts of proteins involved in these processes, to better understand how small molecules such as BBR may be entering and trafficking throughout the intracellular compartments of mast cells.

It is likely that internalization of small compounds such as BBR by mast cells is dependent upon several different energy-dependent processes, and relies on a cell’s activation status and proliferative stage (Fig. 3). Our preliminary data suggests that internalization may be partially dependent upon clathrin (Fig. 3) and is significantly increased when BMMC is stimulated by a growth factor, IL-3. Further analysis of caveolin-dependent endocytosis or pinocytosis may determine whether BBR is internalized using these pathways. A better understanding of these processes may increase our knowledge of how small drug molecules enter mast cells and whether they encounter or escape endolysosomal digestion. Understanding these internalization processes is important since has profound consequences on a drug’s bioavailability and effectiveness. These studies will open new avenues for designing cell-targeted drug delivery technologies and therapeutics for mast cell disorders such as allergic inflammation. 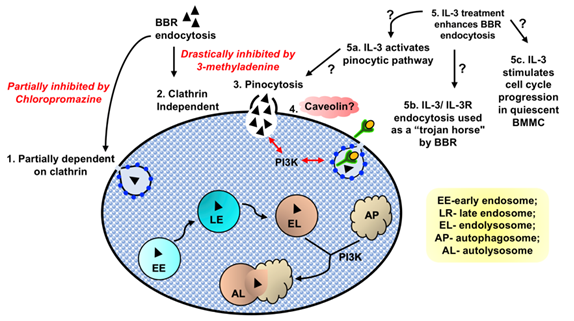 Our data shows that BBR endocytosis might be partially dependent upon clathrin (1). BBR endocytosis was drastically reduced by the PI3K inhibitor 3-methyladenine, that plays a prominent role in fusion of macropinosomes with the plasma membrane. Hence, we speculate that majority of BBR might utilize a clathrin independent (2) pinocytic pathway to internalize into BMMC (3). Methanol fixation that removes cholesterol, the integral structural component of caveole, substantially reduces BBR internalization into BMMC. Hence, further investigation to unravel the involvement of caveolin (4) in BBR’s endocytosis might be interesting. Our data showed that IL-3 treatment significantly enhanced BBR endocytosis in terminally differentiated, partially quiescent BMMC (5). We speculate that IL-3 might also: (5a) activate a specific pinocytic pathway and that in turn enhances BBR endocytosis or (5b) promotes the IL-3 receptor’s clathrin-mediated endocytosis that could perhaps be utilized as a trojan horse by BBR to internalize into BMMC or (5c) engage partially quiescent BMMC into the proliferative stages of the cell cycle.

Author contribution- SBA did the experiments and analyzed data. SBA and MK wrote the manuscript.

We thank Narcy Arizmendi, Feng Wang and Ashley Wagner for their technical support.

This work was funded by the National Research Council Canada.