Capsicum annuum L., an evergreen perennial originating from the Americas, is a widely cultivated crop from the Capsicum genus. The success of C. annuum as an economically important plant is attributed to its ability to be cultivated around the world as different varieties, contributing to distinct taste profiles, phenotypes, and colloquialisms (e.g. bell pepper, chili pepper, cayenne, poblano) [1].

Pepper cultivation is often influenced by various environmental factors, including temperature, drought, and salinity [2]. Of importance are drought and salinity, both of which contribute to osmotic stress. Osmotic stress, or osmotic shock, is a type of abiotic stress that induces decreased water potential in a plant. Sudden increases in solute concentrations in a plant’s environment, as observed in drought-affected and high-salinity environments, trigger movement of water out of the plant cell [3].

Global climate change, including severe droughts and increasing soil salinity, is introducing mounting challenges to food security [4]. Nonetheless, global warming poses as an imminent challenge for pepper development and maturation [5]. Although there have been recent advances in developing osmotic stress-resistant varieties C. annuum, the molecular mechanisms and gene regulation underlying response and resistance to osmotic stress is poorly understood [6, 7].

In this study, publicly available RNA-sequencing data of leaves from C. annuum experiencing osmotic shock were analyzed to investigate the transcriptional changes in the crop’s response to this abiotic stressor. This comparative transcriptomic analysis expands our knowledge and sets the stage for developing osmotic stress-robust varieties of C. annuum.

To confirm the quality of RNA-sequencing data, gene abundances of independent individual runs from each sample were compared (Figure 1B). Further quality checks provided gene density (Figure 1A) and a scatterplot matrix (Figure 1C). The percentage of mapped reads to the C. annuum genome was determined from HISAT2 alignment summaries (Figure 1D). These sequencing and mapping quality checks suggested that the data qualified for further analysis. 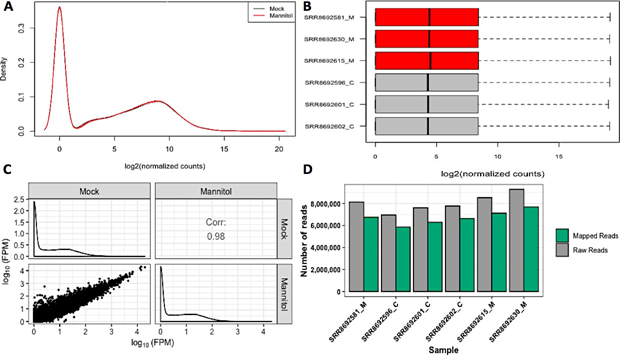 Panels A, B, and C show data amongst replicates in terms of gene density, distribution of read counts, and non-summarized read counts for all genes. Panel D displays mapped reads compared to raw sequencing reads where x axis indicates samples used in the study and y axis indicates number of reads.

Normalization resulted in 2879 genes that were differentially expressed between mock control samples and plants induced for osmotic shock (Figure 2B). Plotting the top two principal components revealed a clustering trend (Figure 2A). 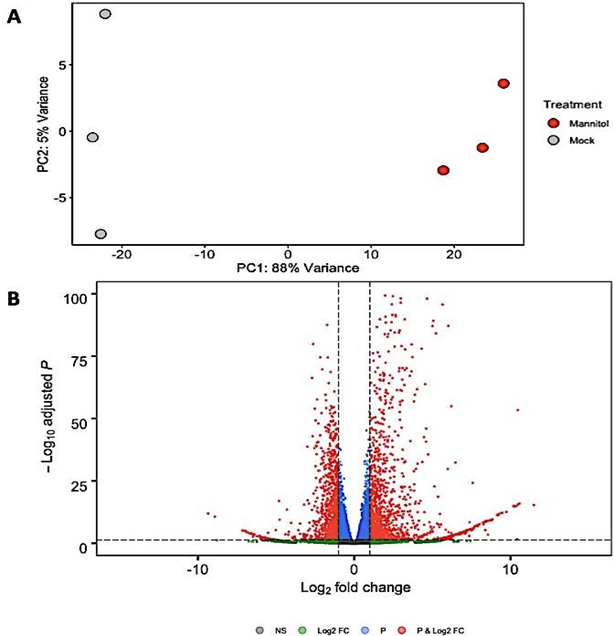 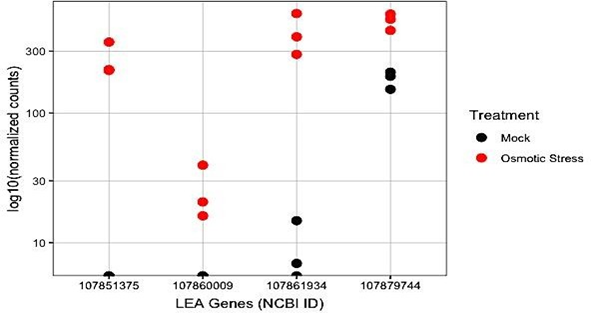 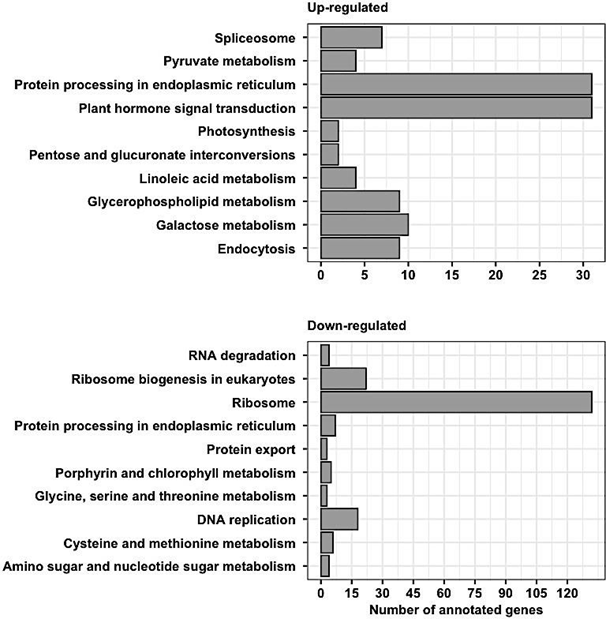 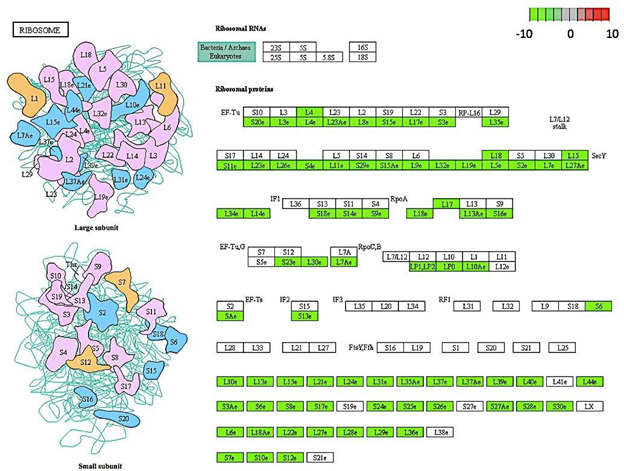 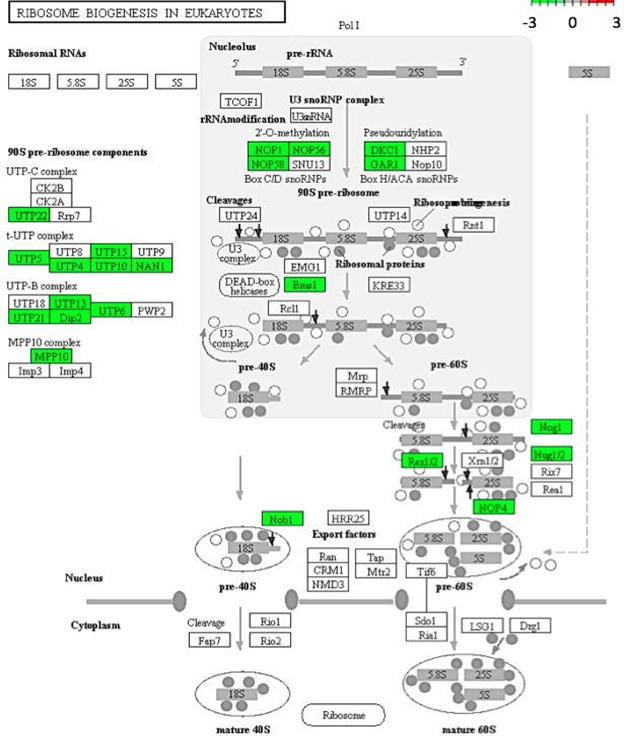 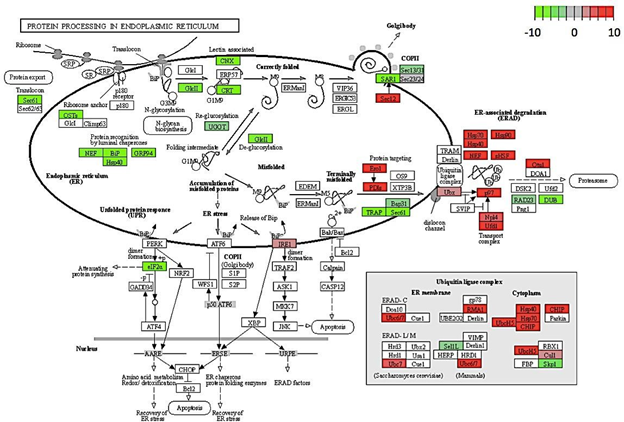 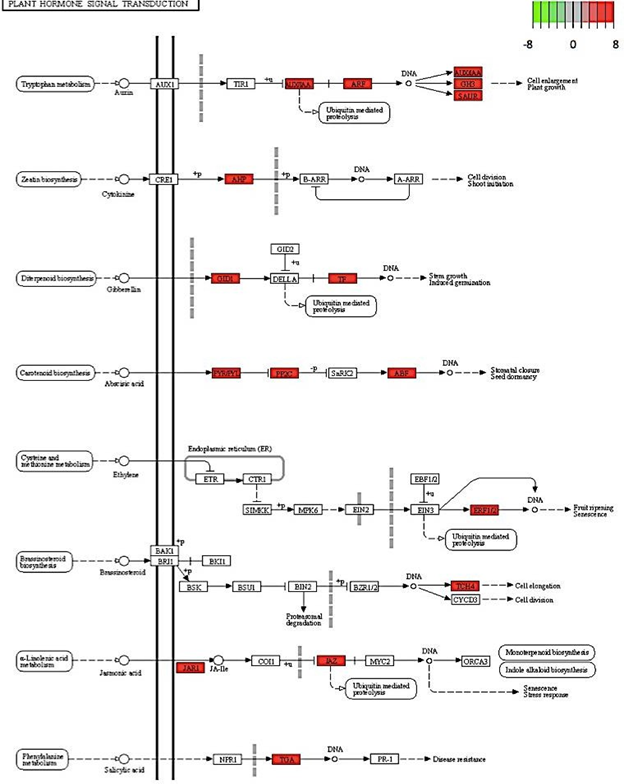 Scrutinizing up regulated genes in osmotic stress treatment group showed that numerous genes encoding late embryogenesis abundant proteins were significantly increased in their expression levels. LEA proteins were first characterized during the maturation drying process of embryo development. Many of these proteins have been classified as ‘hydrophilins,’ a family of hydrophilic proteins [20]. LEA proteins have been shown to accumulate in vegetative tissue of plants inhabiting water-deficit environments [20]. The have also been implicated with desiccation tolerant structures and stages of plant development [21,22]. Under water deficits, crucial enzymes suffer conformational changes that lead to decreased activity or denaturation. It is hypothesized that LEA proteins prevent the conformational changes of critical enzymes during these stress conditions [23, 24]. Genes encoding these proteins may serve as an attractive basis for developing varieties resilient in osmotic stress-affected environments.

Gene enrichment analysis was used to acquire a global view of gene expression perturbations. Of the top significantly down-regulated pathways, ribosomal proteins and ribosomal biogenesis were two that were annotated with the most genes (Figure 4). Although the literature focused on these pathways in plants under stress is limited, it has been documented in yeast that exposure to abiotic stress factors causes a reduction the ribosome abundance. This is thought to be a survival mechanism since the major source of toxicity derived from misfolding of newly synthesized proteins, such as ribosomes. Decreasing ribosomal production would decrease the amount of misfolded proteins and act as an effective stress response [25]. A similar mechanism may play a part in the response of C. annuum leaf cells against osmotic stress.

This hypothesis may be further supported by the fact that certain genes in the endoplasmic reticulum (ER) protein-processing pathway were up regulated (Figure 7). Genes encoding heat shock proteins (Hsp), such as Hsp70, Hsp90, and Hsp40, showed increased expression under osmotic stress. These proteins play important roles in proper folding and degradation of proteins [26].

In addition, several hormone-signaling pathways were up regulated, including carotenoid biosynthesis and tryptophan metabolisms. These findings are consistent with recent literature results. For example, in model plant species, Arabidopsis thaliana, carotenoid biosynthesis was up regulated in response to osmotic stress [27]. It is crucial to note that an important product of the carotenoid biosynthetic pathway is hormone abscisic acid (ABA) and it is well documented that ABA protects the xanthophyll cycle and the photosynthetic systems from oxidative stress [28]. In addition, ABA triggers the closing of stomata when soil water is insufficient for transpiration [28].

This study analyzed the leaf transcriptome of Capsicum annuum undergoing osmotic stress. The results conclude that there is an increased regulation of major stress response pathways.

Although this study was limited to an in silico perspective, the putative findings establish a basis for additional investigations and validation experiments to clarify the transcriptomic changes in response to abiotic stress.

Special thanks to Electronic Laboratory for Science and Analysis (ELSA) High Performance Computing cluster provided by The College of New Jersey for enabling the analysis of this high- throughput data.

The author declares no conflict of interest.