Papaver somniferum, colloquially known as opium poppy, currently remains as the only commercial source of pharmaceutically important benzylisoquinoline alkaloids, of which include canadine. Canadine is an important naturally occurring alkaloid in current demand for pharmaceutical studies. Understanding the biosynthesis in plantae will help in increasing production of this alkaloid. In the present study, a comparative transcriptomic analysis was performed between gene expression data procured from the normal cultivar and a high canadine cultivar. Results indicated differential expression of key enzymes in the phthalideisoquinoline pathway leading to canadine biosynthesis. Specifically, it was found that transcription of genes encoding berberine bridge enzyme canadine synthase, and scoulerine 9-O-methyltransferase were significantly increased in the high canadine cultivar compared to the normal cultivar. These findings provide basis for further elucidating the coordinated transcriptional processes underlying canadine accumulation in P. somniferum cultivars.

Opium poppy (Papaver somniferum) is an important source of benzylisoquinoline alkaloids, a group of plant secondary metabolites that exhibits a multitude of pharmacological activities including antimalarial [1], antispasmodic [2], analgesic [3], and antitussive [4]. Canadine is a benzylisoquinoline alkaloid implicated in myogenesis, muscle preservation, and antioxidant activity [5, 6]. Given that canadine is an important naturally occurring alkaloid in current demand for pharmaceutical studies and procurement is limited to natural producers, it is imperative to explore novel methods for producing this compound. Understanding the biosynthesis of canadine in its natural producers, such as opium poppy, will provide insight for engineering metabolons, selective breeding, and prompting exploration for new sources of canadine. Analyzing gene expression profiles can allow for the elucidation of molecular pathways leading to synthesis of metabolites, especially for characterizing the transcriptional regulation of crucial enzymes [7, 8]. Previous studies have used transcriptome analysis to characterize the biosynthesis of benzylisoquinoline alkaloids in P. somniferum [9, 10]. However, no previous study has utilized comparative transcriptomics to focus on canadine biosynthesis in plantae between different cultivars of opium poppy.

The specific cultivar, T, analyzed in this study has been shown to accumulate canadine in greater amount compared to normal cultivar B1 (Table1). Further analysis revealed an increased expression of key enzymes in the canadine biosynthesis pathway such as canadine synthase, berberine bridge enzyme, and scoulerine 9-O-methyltransferase (Figure 1A, 1B). Genes for other enzymes in the canadine biosynthesis, such as pathway did not display significant differential regulation compared to B1 cultivar. 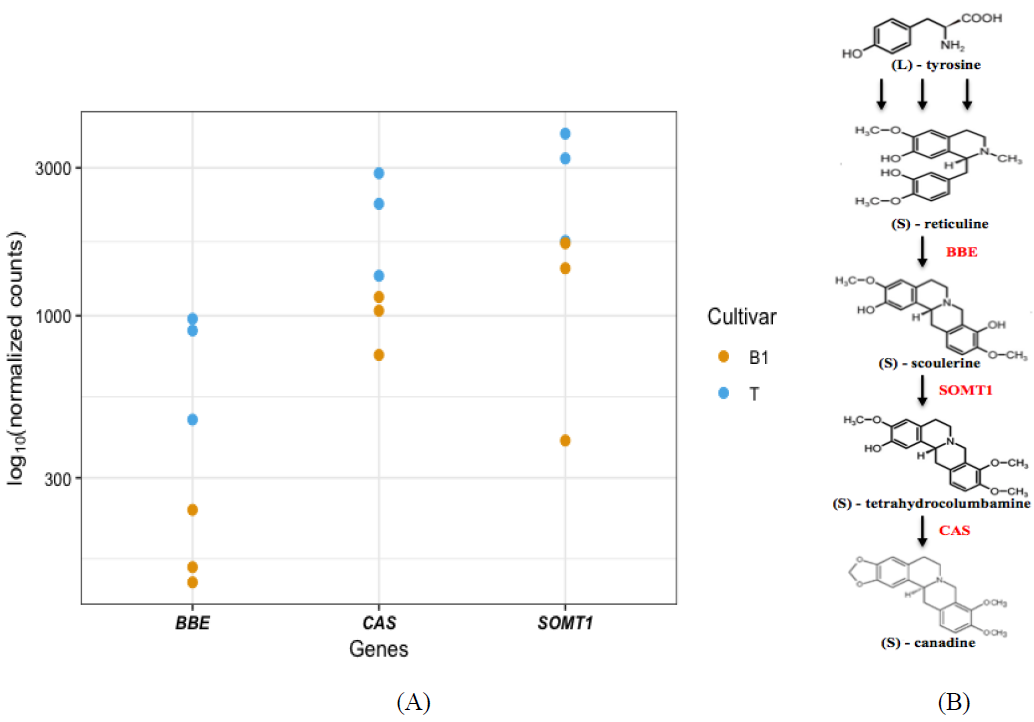 Figure 1: (A) Normalized counts of berberine bridge enzyme (BBE), canadine synthase (CAS) and scoulerine 9-O-methyltransferase (SOMT1) in the two opium poppy cultivars; (B) Biosynthesis of canadine in opium poppy. (S)-Scoulerine is formed from (S)-reticuline by berberine bridge enzyme (BBE). (S)-Canadine is then formed sequentially from (S)-scoulerine by scoulerine 9-O-methyltransferase (SOMT1) yielding tetrahydrocolumbamine, which then acts as a substrate for the methylenedioxy bridge forming enzyme canadine synthase (CAS).

The results indicate transcriptional upregulation for certain genes in the phthalideisoquinoline pathway leading to the synthesis of canadine in high canadine accumulating cultivars. The three enzymes in Figure 2a act sequentially and may provide further evidence for sequential enzyme expression [20]. The increased expression of scoulerine 9-O-methyltransferase may prevent scoulerine from accumulating in appreciable amounts compared to B1 cultivar. It is also important to note that not all of the genes encoding enzymes in the pathway exhibited increased expression. Further genome annotation of the P. somniferum genome will allow us to uncover possible alterations in transcriptional regulator expression specific to enzymes involved in canadine biosynthesis. Briefly herein, a novel characterization of the canadine biosynthetic pathway from a transcriptomic perspective in a high-canadine cultivar was reported. The putative findings establish a basis for additional investigations and validation experiments to clarify the transcriptomic regulation underlying the biosynthesis of this important benzylisoquinoline alkaloid.

Special thanks to Electronic Laboratory for Science and Analysis (ELSA) High Performance Computing cluster provided by The College of New Jersey for enabling the analysis of this high-throughput data.