At birth, one hundred and fifty beef calves were randomly assigned to one of three groups. Dams of the calves had received no vaccines for at least two years. At day sixty of age, serum was drawn for antibodies against exotoxins from Clostridium perfringens (Clp) type C and D, Cl. novyi (Cln) and Cl. sordellii (Cls). Calves in group one were administered 2ml of an intranasal vaccine containing modified live BHV-1, BRSV and PI3 virusa (IN), a modified live viral vaccine containing bovine viral diarrhea virus (BVDV) types 1 and 2 in combination with a Mannheimia hemolytica (BVDMh) inactivated leukotoxoidc and a Clostridium Chauvoei-Septicum-Novyi-Sordellii-Perfringens Types C and D Bacterin-Toxoid vaccine (7way).b Calves in group two received a systemic MLV combination vaccine containing BVDV types 1 and 2, BHV-1, BRSV, PI3 virus and the same Mh vaccined (FivewayMH). Group three were vaccinated with only the 7 way Clostridium vaccine. At 210 days of age serum was drawn and calves in group 1 received the FivewayMH and 7way vaccines. Calves in group 2 were administered the IN, BVDMH and 7way vaccines and group 3 calves were vaccinated with only the 7way. At 240 days of age sera was drawn for final SN titers. At 60 days of age high levels of maternal antibody against all the exotoxins tested were detected. Serologic responses in all groups indicated maternal antibody interference after 7way vaccination to Cl. Perfringens C and D and in group 3 to Cl. novyi and sordellii. Interference of the immune response to Cl. novyi by systemic MLV BHV-1 viral vaccination was seen on day 60 and 210 to Cl. sordellii. This study indicates that both maternal antibody and concurrent systemic BHV-1 vaccination may interfere with serologic responses to Clostridial exotoxin vaccination. The impact of the decreased antibody levels on protection could not be determined in this study.

Clostridia bacteria are spore forming gram positive rods. They are anaerobic and over 200 species are found in nature [1,2]. The bacteria are usually found in dead or dying plant and animal material where their potent enzymes digest the material, breaking it down and using it to as a growth media [2,3]. These potent enzymes, synthesized and released by the bacteria, are called exotoxins. These exotoxins are some of the most potent toxins known to man [3].

Clostridia also have the ability to form highly durable spores when the conditions are not favorable for bacterial growth [3,4]. Clostridial spores can remain viable in the soil for 25 years and are resistant to heat, cold and sunshine [1-4]. These spores can be picked up in the course of normal eating, circulate through the animal and be re-excreted [5]. If there is disruption of blood flow to an area in the body these spores can lodge, and in the anaerobic environment begins to replicate and release toxins causing sudden death [2,6,7]. Even though outbreaks due to Clostridia are rare, after an infection mortality rates are high. Furthermore, the spores are readily found in the soil [1-6]. For these reasons, Clostridial vaccines are among some of the oldest and most widely used bacterins in cattle, sheep and horses [1-4]. These vaccines have been used for well over 60 years in cattle [4,8]. The availability and use of efficacious bacterins, toxoids, and bacterin-toxoids has not eliminated clostridial infections.

However, little research has been done evaluating immune responses with these vaccines in recent years. This study was done to assess the effect of maternal antibody and concurrent vaccination with viral vaccines on serologic responses response of calves to a multivalent Clostridial vaccination program.

The study consisted of 150 newborn calves that were part of the resident Angus base herd. The dams of these calves ranged in age from 3 to 12 years. At birth, calves were individually identified with an ear tag and randomly assigned to treatment group 1, 2 or 3. To ensure that calves vaccinated intra-nasally were not comingled with non-intranasal vaccinated calves, treatment groups were maintained in separate pastures for thirty days after vaccination to minimize the risk of shedding post vaccination to calves not receiving the IN vaccination.

Table 1 shows the assignment of the calves and vaccination, sampling and other management at each time point in the study. On approximately day 60 (range 53-64 days), two serum tubes were collected from each calf and all calves received a Clostridium Chauvoei-Septicum-Novyi-Sordellii-Perfringens Types C and D Bacterin-Toxoid vaccinationa.

Calves in groups 1, received 2ml of an intranasal vaccine containing modified live BHV-1, BRSV and PI3 virusb (IN) vaccination and a modified live viral vaccine containing bovine viral diarrhea virus (BVDV) types 1 and 2 in combination with a Mannheimia hemolytica (Mh) inactivated leukotoxoidc. Group 2 was administered a MLV bovine viral diarrhea virus (BVDV) types 1 and 2, BHV-1, BRSV, PI3 virus and the same Mh vaccined (FivewayMH)d. On day 210, All calves were vaccinated with the seven way clostridial vaccine and serum was drawn. Calves in group 1 were administered the FivewayMH vaccine and calves in group 2 received the IN and BVD/Mh vaccination. On day 240 serum was collected from all the calves. BHV-1 serology was monitored during the study to for the possibility of viral transmission from the intranasal vaccinates.

All samples were transported on ice packs to the point of serum separation and sample freezing. Serum was separated, and all samples were stored frozen at −20 oC until the completion of the study and shipped to the diagnostic laboratory for laboratory analysis. Antibody to Clostridium perfringens beta and epsilon exotoxins (Cl. perfringens C and D), Cl. novyi and sordellii toxin were determined using an ELISA with the following format: beta or epsilon toxin was coated to 96-well plates. The serum samples were tested using a series of two-fold dilutions to determine the endpoint titer. Bound calf antibody was detected using a secondary antibody conjugate. Each serum sample was tested twice to determine titers. One calf’s sample was retested as the initial result was an outlier for beta and epsilon toxin levels.e

Four calves died during the study period, three were discovered autolyzed in the pasture (one from each group) and the cause of death was not determined and one calf died from pneumonia (group 3). Control calves had BHV-1 serum IgG levels of less than 1:8 during the study period indicating no BHV-1 exposure from vaccinates or wild virus occurred (Figure 1). 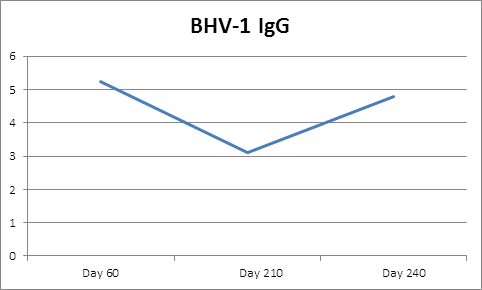 Analysis was performed on actual and log transformed antibody levels. Similar statistical results were seen on both analysis (Tables 2, 3 Figures 2, 3). High levels of Cl. perfringens titers were seen across all three groups prior to vaccination on day 60. Each group had significant decreases from the day 60 antibody levels and significant increases following their second vaccination (on day 210) by day 240 to both Clostridium perfringens C and D. 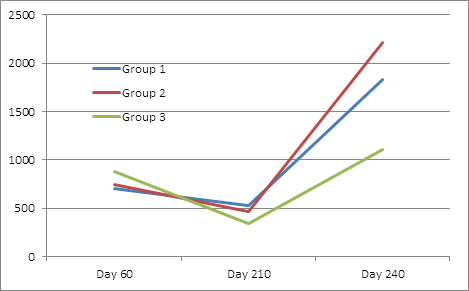 The herd was chosen for this study, in part, because the cows in this herd had received no vaccine for several years. However, the high titers against Clostridium perfringens exotoxins, seen in the sixty day old calves’ pre-vaccination, were most likely due to maternal transmission. While it cannot definitively be attributed to colostral transfer and not exposure, the fact the antibody levels declined until a second dose of vaccination was given on day 210, when the antibody levels had dropped, would indicate continual maternal decay not active immunity in the calves. While the maternal antibody transmission was not as high for Cl. novyi and sordellii, it was still high enough to block serologic responses in some of the calves. Whether the high level of maternal antibody is an indication of the ongoing exposure in the cows or persistence of previous vaccine responses could not be determined in this study but has been reported previously [9,10].

The lack of response to the initial doses is most likely due to maternal blockage of vaccination. It is important to note that the two groups with lower 60 day Cl. novyii and sordellii (group 1 and 2) did not show the decline of antibody following the sixty day vaccination and over the long time frame between vaccinations actually had some increase in antibody responses. It can be assumed that higher levels of maternal antibody can block clostridial vaccines responses, whereas moderate to low maternal antibody levels do not. The level of antibody in which blockage of vaccination occurs may vary by the vaccine antigen and/or formulation with different adjuvants [11]. For protection against early clostridial infections it may be more efficient to vaccinate the cows to increase colostral transmission of the colostridial antibodies and wait to vaccinate calves until they are older [10].