Over the past years, it has been discovered that microRNA possesses a critical role in lung cancer related deaths worldwide. Different research on molecular biology of lung cancer has improved our understanding that determines the behavior of malignant cells which has encouraged the discovery of driver mutations. The identification of driver mutations in lung cancer has led to a paradigm shift and provides us with new direction towards personalized therapies with improved survival rates. Therefore, it is of interest to explore microRNA driver mutations in this context. Hence, in this research different consistent point mutations are identified in candidate microRNAs at different sites and different numbers of transcription factors binding at these consistent mutations are examined. The highest consistency of mutation was 18 found in mir-23A at the genomic point (13880331) where total 5 transcription factors were binding. The second highest consistency was 12 found in different miRNAs at different genomic locals where 1-2 transcription factors were binding whereas; mir-25 is the only having consistency of 7 at genomic point (100089125) with 1 transcription factor attachment. The result of consistent mutation in regulatory regions indicates that these mutated sites may serve as potential biomarkers for lung cancer. Moreover, the comprehensive utilization of these microRNAs mutations, different drugs can be designed that mainly target these specified mutated loci and would be helpful in treating lung cancer.

Lung cancer is one of the leading cancer related mortality [1]. It is characterized by genetic diversity with relatively few persistent mutations, occurring at high frequency [2]. In this condition, the cells begin to divide in the lungs uncontrollably. These abnormal cells obstruct the functioning of lung that ultimately reduces the ability of a person to breath. Normally, our body has check and balance system by which our body programs cells to grow and die at certain stages of life cycle in order to avoid overgrowth of cells. Whereas in cancer, this instruction is overrides, causing cells to multiply and grow exponentially. This overgrowth of abnormal cells, leads to the development of lung cancer.

Moreover, many of these mutations are associated with several environment and heredity factors [3]. The changes in phenotype from normal lung cell to malignant occur in a series of genetic alterations and identification of these mutations has the potential to provide further therapeutic opportunities [4]. However, in recent years the vast improvements have been made in molecular biology that helps researchers to understand and underpins lung cancer. This has lead to a great improvement in prevention of diseases, treatments and early detection of tumors [5, 6]. The symptoms of lung cancer may comprise coughing with blood, stained mucus, persistent cough, wheezing sound, unexplained weight loss, breathlessness, pain when coughing or breathing [7]. The risk factors that are involved to take part in the development of lung cancer are smoking, asbestos fiber, pollutant air, exposure to radon, ceramics’, and fireworks [8]. These factors mutate the genome and some of these mutations may play aggressive role in driving lung cancer.

MicroRNAs also known as miRNAs or miRs, are short, non-coding, single stranded RNAs 20-25 nucleotide long [9]. The main function of MicroRNA is to regulate gene expressions post -transcriptionally [10]. MicroRNAs comprise of 1-2% of all genes [11]. The first microRNA was discovered as non-coding small RNA as growth regulator of Caenorhabditis elegans (lin-4 and let-7) [12]. MicroRNAs are unable to code proteins, but acquiring significant catalytic, regulatory and structural functions. Thus, microRNAs are capable of increasing and decreasing expressions of genes by binding to the untranslated region (3′-UTR) of their target messenger RNA (mRNA) and repress the production of protein by destabilizing the mRNA [13, 14], also known as gene silencing.

Different researches have proved that altered expression of miRNAs in tumors may also act as novel oncomiRs [15] and tumor suppressors [16]. These abnormal expression levels of microRNAs are characterized as a result of aberrant expressions of precursor microRNAs transcript. These aberrant expressions of genes have been observed to cause different abnormalities and cancers such as prostate, lung, breast, gastric, colorectal, lymphoma, leukemia, melanoma, and hepatocellular carcinoma [17]. Additionally to their role in physiological conditions, studies indicate that microRNAs is also playing significant role in the pathological mechanisms of neurodegenerative diseases [18].

In this mutational analysis, the initial step is to identify mutations in non-coding variants. For this purpose, non-coding variant file is downloaded from COSMIC database (release v87) and overlapped with 100kb extended genomic locations of candidate miRNAs using bedtools intersect command. The non-coding variants file contains complete data of non-coding mutations. Genomic locations of microRNAs are identified from Ensemble genome browser GRch38. The genomic locations are extended, prior to overlapping because, it has been found in almost 70% of cases, that regulatory region of a gene lie within 100 kb [19]. The overlapped result determines vastly repetitive mutational regions in candidate miRNAs. Therefore; we developed python code to obtain non-repetitive mutations to identify unique sites of interest.

In the next step, we identified consistent mutations in non-coding variants by overlapping repetitive and non-repetitive file. It is also not necessary that all consistent point mutations possess the potential of driving lung cancer. It might be possible that these mutated sites are just repeating itself because of any interruption of any cellular process like DNA repair mechanism. Some of them can be passenger mutations because throughout the life of human beings many mutations can occur randomly, and many of the mutations occur due to several environmental factors, and few mutations are inherited from parents to their offspring’s. In any case, a portion of these consistent mutations can be driver mutations.

Non-coding region of DNA contain regulatory regions that are capable of increasing and decreasing the gene expressions. At these regulatory regions transcription factors bind which can either enhance or suppress the process of translation. Different studies indicate that mutations inside regulatory region are extensively significant in cancers and other pathogenic diseases. To further characterize and shortlist candidates, IMR90 Transcription factors (TFs) are mapped that are downloaded from UCSC ENCODE with identified consistent mutations to examine the point mutations in regulatory regions. IMR90 is the cancer cell line of human lung. There are total 10 Transcription Factors (TFs) for IMR90 cells out of which 5 (CTCF, MAFK, RAD21, POL, CEBPB) were downloaded from UCSC ENCODE (hg19). The files are then converted to GRCH38/hg38 genome coordinates using UCSC liftover tool. The overlapped result recognized significant TFs’ binding sites (TFBS) as well as the number of TFs binding at these consistent point mutations.

MIicroRNA are crucial in various biological processes such as regulatory functions, cellular differentiation, development and apoptosis. In cancers, mutations in non-coding regions can cause dysregulation of oncogenes and tumor suppressors. Measures of function in the non-coding genome usually reflect on binding of transcription factors. In this study, we identified potential driver mutations in candidate microRNAs. As shown in Figure 1, all non-coding mutations in microRNAs are first identified by intersecting non-coding variants with 100kb extended genomic locations of each microRNA using bedtools intersect command. This recognized repetitive mutations therefore; we used python code to extract non-repetitive mutations. In the next step, consistencies in mutations are identified by intersecting repetitive and non-repetitive files. Higher the consistencies of mutations have higher probabilities of driving lung cancer.

After the identification of consistencies, we map total five Transcription factors (CEBPB, CTCF, MAFK, POL2, RAD21) of IMR90 (lung cancer cell line) with consistent mutations of microRNA using bedtools intersect command. The result of intersecting consistent point mutations with Transcription factors of IMR90 cells examine number of Transcription Factors binding as well as significant Transcription Factors binding sites as shown in Table 1 (A, B).  Highest consistency is found in MIR-23A as compared to other microRNA. At the highest consistency of 18 at a point mutation of (13880331) total 5 TFs are binding in MIR-23A. Recognition of this persistent mutated loci of non-coding variants, propose that it can play significant role in driving lung cancer and more likely to influence regulatory elements of genes that ultimately cause disruption in translation process because, this precise loci is having the highest probability of causing lung cancer. 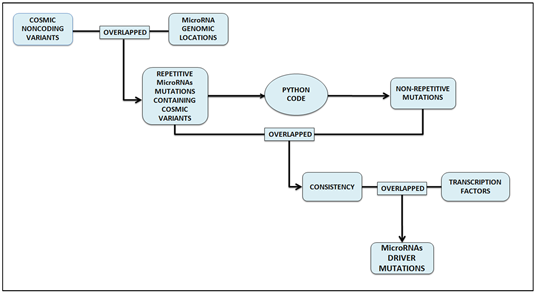 The exploration for driver mutations in cancer genome is a crucial step in the progress towards personalized approaches to cancer treatments. The ability of miRNAs to regulate gene expression levels and their key role in progression of lung cancer endow with new direction for research on prognostic and predictive biomarkers [20]. By recognizing the molecular variations in microRNA responsible for driving lung cancers, drugs can be designed that particularly targets deregulated or mutated genes. Furthermore, new approaches may be designed that averts the damage or even restore these mutated regions of DNA due to which these drivers are formed. Hence, it is of importance to evaluate these driver microRNA mutations for further consideration.

NAS and RN are thankful to National Center in Big Data and Cloud computing (Genomics Lab) NED University of Engineering and Technology for their tremendous support in this study.