Cowpea is a one of the major leguminous crop and plant based dietary sources of carbohydrate and protein in the tropic and subtropics where it is widely cultivated, consumed and used for managing protein energy malnutrition. They have trace amount of vitamin A, thiamine, folic acid, niacin, riboflavin, biotin, iron and calcium [1, 2]. Cowpea is majorly cultivated in Northern part of Nigeria. However, cowpea belong to the group of crops that strongly assimilate heavy metals (Ar, Pb, Cd and Hg) which pose serious health hazards to human. Human exposure to heavy metals has risen exponentially as a result of increase in the use of industrial processes, products and chemicals in raw and processed foods as well as use of irrigated water for planting [2]. Moreover, the accumulation of these heavy metals solely depends on the type and parts of plants, Cannabis sativa accumulates cadmium (Cd) most in its seeds [3], while soy beans also accumulates lead (Pb; 0.34 mg kg−1 for FD), Cd (0.23 mg kg−1 for ZX) and chromium (Cr; 1.14 and 1.75 mg kg−1 for FD and ZX, respectively) in its seeds [4]. It has been suggested that activities like funmigation, insecticide and herbicide applications both at pre and post-harvest stages of cowpea production, facilitates the accumulation of heavy metals and hydrocarbons in foods [2, 5]. Therefore, there is need to evaluate the content of toxic nutritional composition in Ibadan Metropolis, Oyo State, Nigeria.

The cowpea cultivars were sourced from Bodija market in Ibadan metropolis Oyo State Nigeria between January and February 2019.

Five clean and insect free cultivars of locally consumed cowpea namely; Olo, Oloyin, Oloyin milk, Drum and Sokoto were randomly collected per bag from three sections of the market into a clean, dry, air tight, and well labelled container. They were thoroughly rinsed in order to remove residues of insecticides applied on them, dried, milled and stored in their respective containers until analysis.

Heavy metal was determine using Atomic Absorption Spectrophotometer according to the method of A.O.A.C [6]. The result was expressed as mg/g d.w.

Moisture content determination was carried out using the air oven method at temperature between 103-105°C. Calculation

A known weight of finely ground sample was taken into a clean, dry crucible with a known weight (W1). The crucible was then placed in muffle furnace at 600°C for 6h until it ashed completely. It was then transferred directly to desiccators, cooled and weighed immediately (W2).

The soxhlets extraction method was used for the determination of crude fat with Petroleum ether at 40°C- 60°C boiling range. The fat extracted from a given quantity of sample was then calculated:

The residue obtain from fat extraction was used to determine crude fibre after series of digestion and washing,it was then was cooled and weighed. The loss on ignition was reported as crude Fibre

The carbohydrate content was calculated by difference. % CHO = 100-(Sum of the percentages of moisture, ash, fat, protein and crude fibre)

Values are Mean ± Standard error, n=3, Means with the same letter are not significantly different at P<0.05

Values are Mean ± Standard error, n= 3, Means with the same letter are not significantly different at P<0.05 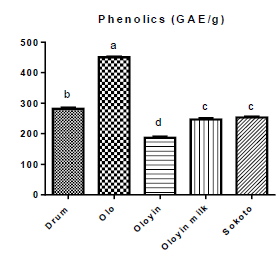 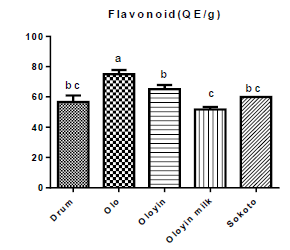 Table 1 shows the presence of arsenic in significant amount in all cultivars evaluated which is in the order Oloyin > Oloyin milk > Sokoto > Drum > Olo while Nickel is present in a negligible amount. Lead, Chromium, Mercury and Cadmium were not detected.

Figure 1 and 2 shows the phenolics and flavonoids contents in the cultivars. The phenolics content in the cultivars is in the order; Olo > Drum > Oloyin milk > Sokoto > Oloyin milk while flavonoids content is in the order: Olo > Oloyin > Drum > Sokoto > Oloyin milk. However, despite the highest protein and carbohydrate content in Oloyin and Oloyin milk, the highest arsenic content above tolerance limit as recommended by FAO, 2013 in these cultivars is suggested to make them unsafe for consumption although some cultivars contain arsenic and nickel content in tolerable limit, their accumulation in body overtime could be detrimental. Arsenic is highly poisonous and carcinogenic to human health. The arsenic content of Oloyin and Oloyin nla are 0.10 and 0.12 mg/g respectively. Just like Soybean that accumulates zinc lead and cadmium in their seeds [8], some of the cultivars of cowpea have similar capabilities. It is likely that most of these assimilations occur at storage stage as a result of the insecticides applied on them to prevent infestation of weevils. Many of these insecticides have heavy metals as their active ingredients.

Olo and drum cultivar have a significantly lower content of arsenic which is below the tolerable its level compared to Oloyin and Oloyin milk. This makes it relative safe for consumption. Moreover, all the cultivar showed varying contents of phenolics and flavonoids. Olo and Drum cultivars contain tolerable standard for arsenic. cowpea is one of the major cheap and affordable protein in the developing countries most commonly consumed by both poor and rich in Nigeria, accumulation of these heavy metals overtime could cause harvoc to human health especially arsenic being major potent human carcinogen as cancer is one of the chronic diseases causing over 8.8 million worldwide.

The present work show the accumulation of arsenic in cowpea cultivars consume in major market (Bodija) Ibadan which can be detrimental to human health although contain some levels of nutrients and phytochemicals which are regarded as antioxidants, its level and availability after cooking is uncertain. Therefore, regular intake of fruits and vegetables which contain some established level of antioxidants to neutralize the toxic effects of these heavy metals as a result of consumption of contaminated food will be beneficial.