Haemodynamic Response to a Standard Meal: Consideration on A Case of Significant Blood Pressure Peaks in a Diabetic Hypertensive Patient Treated with ARB and Comparison with Normal Age and Sex Matched Subjects

A standard meal is a stimulus that produces a response that consists in the redistribution of blood flow to the splanchnic district, potentially, affecting systemic blood pressure, this phenomenon was studied in animal models and in critic patient. Here we report a case of a diabetic hypertensive-in-treatment woman where two significant blood pressure peaks were recorded, during lunch and dinner, over an optimal 24/h blood pressure control. In the absence of previous normal reference values in the literature, we retrieved a series of n=10 age and sex matched subjects diagnosed normotensive on the mean of 24/h Ambulatory Blood Pressure Monitoring. We finally present our considerations on the normal response to a standard meal compared to what was found in the literature and in the present case, where an impaired control of resistance is hypothesised, and on the possible mechanisms supporting.

From a cardiovascular point of view, a standard meal is a stimulus that produces a response that consists in the redistribution of blood flow to the splanchnic district. In particular, during the digestion there is a sequential increase in the blood flow from the duodenum to the jejunum and, later, to the ileum [1]. In essential arterial hypertension (EAH) and diabetes (DM) an impaired control of resistance has been reported [2], however, it is not known if this impaired control can interfere with the physiological arterial blood pressure (BP) response to a standard meal. Here we report a case of significant increase in BP during standard-meal in a 56 yrs old female affected by DM and EAH treated with Angiotensin Receptor Blocker (ARB) with optimal control of 24/h BP. Since there are no previous data available on paradoxical BP increase during a standard meal in the literature, in order to define what could be a normal BP response to a standard meal, we retrieved the data of n=10 normotensive on the mean of 24/h Ambulatory Blood Pressure Monitoring (ABPM) age matched females. We finally present our considerations on the normal response to a standard meal compared to what was found in the literature and in the present case.

A 56 years woman, affected by EAH and DM underwent ABPM in order to evaluate the effectiveness of BP control with losartan 50 mg 1/die; the diagnosis of EAH was made after menopause (50 yrs) and, subsequently, that of DM, identified during a routine blood test, starting a moderately low carbohydrate diet. The ABPM showed an optimal 24/h, day and night BP control (Table 1), however, during the main meals on the 24-hour course, two significant pressure peaks were highlighted. The maximal increase in systolic/diastolic BP (SBP/DBP) was +57/+18 mmHg during lunch and +50/+27 mmHg during dinner, over the mean of the day interval. Furthermore, by using as baseline the measurement obtained at -15 min from the meal, the increase in BP during meal was of +53/+11 mmHg at lunch and +47/+24 at dinner. The increase in BP started 15 min before and lasted 75 after dinner/lunch, with the highest values during fasting (Table 2); the 24/h BP and Herat Rate profiles are shown in Figure 1. These values were quite impressive if compared to the overall excellent control of BP during the 24/h and, from the haemodynamic point of view, not justifiable for a standard meal. After having verified that the therapy for ESH had been correctly taken in the morning upon awakening, we checked the consistency of lunch/dinner that was according to the recommended dietary indications in a DM subject, 1000 kcal/day [3]. The error rate in BP measurements reported by the system over 24/h was very low (8.4%) and no repeated measures were done during lunch/dinner. Furthermore, even if we have no reason to consider the result an artefact, the exam was repeated a second time, at a week distance, by using same ABPM model, but different device and without changing any clinical parameter, namely, therapy and diet, and the results were substantially overlapping reporting similar pressure peaks. We asked for a third 24/h monitoring in the follow-up but it was refused by the patient since she poorly tolerated, the measurements, especially during the night. Finally, to elucidate the impact of a standard meal, we retrieved the data of n=10 age matched (47 ± 14.3 yrs) female subjects labelled as normotensive [4] by using as cut-off a BP < 135/85 mmHg obtained from the mean of 24/h ABPM (125.3 ± 8.3 mmHg). As expected from the haemodynamic point of view, a standard meal determined an increase in SBP/DBP of +9.6/+4.4 mmHg using as baseline 15 min before lunch/dinner; this increase was persistent at 15 min after meal, respectively, +7.6/+3.6 mmHg. Trying to answer the question on what is a normal BP response to a standard meal, we have therefore seen that the average increase in blood pressure values, using as baseline 15 min before meal, is +7.4% for SBP and +4.4% for SBP far from the +40% for SBP and +14.5% for DBP observed in our case (Table 3).

Table 2: 24/h Blood Pressure before and after standard meal. 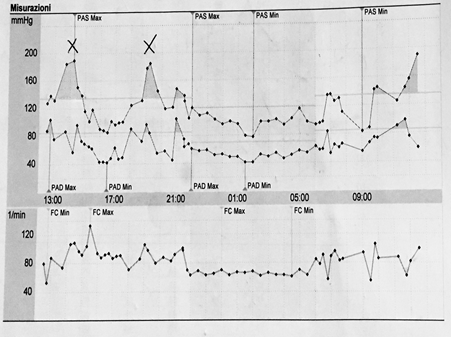 Haemodynamic parameters change continuously during day/night to cope the request from different organs; from this perspective, a meal represents a physiological stimulus that can significantly increase blood flow directed to the enteric tract, in particular pancreatic, duodenal, jejunal and, later, to the ileum. Indeed, blood flow is subject to complex regulation mechanisms, including autonomic and endocrine control [5], it is also possible that the final effect on systemic arterial BP of the local re-distribution of blood flow are self-limited. At this regard, some experimental data in dogs support that BP is not significantly changed after meal [1]; nonetheless, in our control group we found a slight increase in systemic arterial BP and this is in agreement with previous studies on humans that have shown a significant association between SBP/DBP in non-DM women and men [6]; this fact justifies the increase in BP during meal since it follows the insulin (INs) release. Nonetheless in a DM subjects we would expect a lower INs release during meal and, consequently, a lower increase in BP and in our case it was not. Furthermore, in this complex interaction pattern the gut flora has an emerging role since there are growing evidences on the interactions between cardiovascular system and cardio-metabolic disorder. It is known that microbiome (MB) is the main source of acetate/propionate (A/P) found in the blood stream, since bacteria produces these compounds during feeding; recently it has been shown that A/P, at high levels, are involved in the regulation of BP via the activation of Olfr78, a receptor that start the release of renin, and this possible explains, in part, the increase in arterial BP during meal [7]. Furthermore, at low levels of A/P, the Gpr41 receptor is involved in lowering BP. Thus we cannot exclude that in EAH and DM an impaired control of BP is mediated also by the MB [8] and/or by Olfr78/Gpr41 receptors. In this regard, it must also be said that in our reported case, the therapy consisted of an ARB, that affects renin angiotensin system (RAS). By having excluded that 1- the paradoxical increase in BP observed is not related to the size of the meal or 2- to a failure in the efficacy of therapy and after having defined what a normal BP response to a standard meal should be, we report in our case a 5 times greater response in SBP and 3 times in SBP if compared with the normal one. This fact possibly reflects: 1- an impaired control of resistance acting in EAH and DM; 2- an abnormal INs release in response to a standard meal; 3- a defect in BP control by the intestinal microbiome (MB) during a meal.

After the two pressure peaks, in our case, a significant decrease in BP was recorded (Figure 1); other studies have focused the attention on this post-prandial BP decrease claiming that it might be a long-term negative prognostic factor among patients admitted to high-intensity care departments. The mechanism of this decrease is not completely understood, but an inadequate sympathetic nervous system compensation for the meal-induced splanchnic blood pool is supposed, including impairment in the baroreflex function, inadequate postprandial increases in cardiac output, and an excessive vasodilatation mediated by INs and vasodilatory gastrointestinal peptides release [9]. Finally, the increase in blood pressure 15 minutes before a meal was highlighted in a previous study conducted on 10 healthy elderly people without an explanation. It has been hypothesized that the increase in BP may be the consequence of the relative hypovolemia that precedes the meal together with the increase in systemic resistance due to a marked sympathetic activation linked to the prominent role of the “hunt for food” reflex [10].

Our case and considerations support that the study of BP response to physiological stimuli such as meal could help in elucidating some of the defects underlying diseases such as EAH and DM where an impaired control of resistance is hypothesised.

The authors declare that there is no conflict of interest regarding the publication of this paper.