Fungi require already elaborated food in order to live because of lack of chlorophyll. In nature, fungi obtain their food either by infecting living organisms as parasites or attacking dead organic matters as saprobes [1]. Most fungal species grow on land and obtain their nutrients from dead organic matter. Some fungi are symbiotic parasites on other organisms. The majority of species feed by secreting enzymes which partially digest the food extracellularly, and then absorbing the partially digested food to complete digestion internally [2]. As with animals, the major storage carbohydrate of fungi is glycogen. Fungi lack complex vascular system found in higher plants so their transport of food and water is less efficient. Along with bacteria, fungi have an important ecological role in the decomposition of dead plants, animals and other organic matter. Thus fungi are ecologically important because they release large amounts of carbondioxide into the atmosphere and recycle nitrogen and other important nutrients. Fungi are parasitic, due to the fact that they obtain nutrients from a living host organism, a relationship which usually harm the host [3]. Fungal growth requires solid media with the following constituent, a suitable organic substances as source of carbon, a source of nitrogen, certain inorganic ion in appreciable amount, other inorganic ions as trace elements and certain growth factors in every low concentration [1,4]. All fungi can utilize an organic supply of nitrogen. This is often given as peptone, an amino acid or amide. Organic substances such as peptones or asparagines can sometimes serve both to supply the carbon and the nitrogen needs of the organism [5]. Carbon sources are needed for structured purposes and for respiration and must therefore be available in large quantities [6]. Substances such as carbohydrate, fats and oil, proteins, organic acids are all processes of obtaining carbon for the organism. Fusarium oxysporum causes wilt in cowpea, symptoms which do not appear until the plants are about six weeks old include stunted growth and chlorosis [7] also reported F. oxysporum as the causal agent of tomato foot and root rot. Phoma spp. are fungal infections that cause rot or gangrene in potatoes. Phoma foveata, Phoma exigua var. exigua, and Phoma eupyrena are among the species isolated from potatoes [8]. The aim of this study was to evaluate the effect of different sugars as source of carbon on the growth of fungi.

Seed borne fungi associated with cowpea (Vigna unguiculata) was carried out in accordance with the recommendation of International Seed Testing Association [9]. Four hundred (seeds) of cowpea were used. The seeds were surfaced sterilized by immersing them in 70% ethanol for 5 minutes. The seeds were immediately removed and rinsed in three changes of sterile distilled water. Ten seeds of sterilized cowpea were plated on 3 layers of sterile filter paper, moistened with sterile distilled water in 9cm Petri dish. The Petri dishes were incubated at a temperature of 25oC ± 2oC for 7days. At the end of the incubation period, the seeds were examined for fungal growth.

After incubation, the seeds were examined under a light microscope for identification of fungal growth. Pure culture was taken with the wireloop were put on a slide were picked with a sterile inoculating loop on PDA medium until pure cultures were obtained. After inoculation, different organisms were observed growing from cowpea seeds. The organisms suspected to be Fusarium oxysporum and Phoma exigua were examined under the microscope. The identified organisms were subcultured into PDA media to obtain pure culture. The pure culture were stored in a refridgerator at 4oC until when needed.

2.4 Effect of different carbon sources (at varying concentrations) on the growth of Fusarium oxysporum and Phoma exigua

The effect of six different carbon sources namely sucrose, glucose, maltose, xylose, lactose and fructose used in substituting dextrose in the normal PDA and at varying concentrations were determined in this research which was based mostly on observing the rate of growth. Various concentrations of different sugars for glucose and fructose was 0.06mol/cm3, 0.08mol/cm3, 0.11mol/cm3, 0.14mol/cm3 and 0.17mol/cm3. For sucrose, maltose and lactose was 0.03mol/cm3, 0.04mol/cm3,0.06mol/cm3,0.07mol/cm3 and 0.09mol/cm3, for xylose was 0.07mol/cm3, 0.1mol/cm3, 0.13mol/cm3, 0.17mol/cm3 and 0.2mol/cm3 for various masses of sugars. PDA was prepared using standard amount of potatoes and agar i.e 200g of potatoes and 20g of agar respectively (it is referred to as standard in the study to clarify things). The different carbon sources varying from 20g which is referred to as standard to 100g which is five times the standard), distilled water was added. The different media was placed in each conical flask and covered with non-absorbent cotton wool with an aluminium foil. The flasks was sterilized in an autoclave at 121oC for 15minutes and allowed to cool. The media was dispensed in 9cm petri dishes under aseptic conditions. This was done in replicates, the media in each petri dish was covered for 24hours to check for contaminant before inoculation. Phoma exigua and Fusarium oxysporum was inoculated into the centers of the petri dishes using 5mm cork borer. The organisms was place in the incubator for 7days. On daily basis, the mycelial growth in the petri dishes were measured using a transparent ruler (30cm)

The fungi isolated and identified to be associated with the cowpea seeds include: Phoma exigua Desm., and Fusarium oxysporum Schlencht (figure 1).

(a) Phoma exigua and (b) Fusarium oxysporum 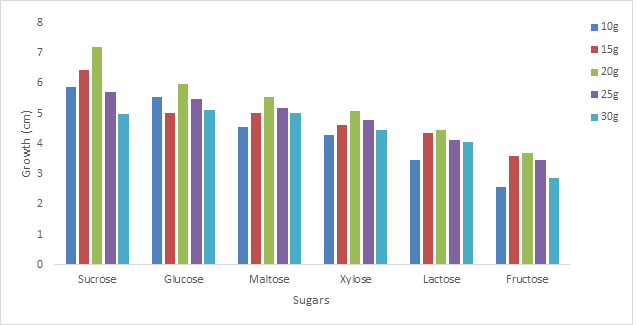 Figure 1: The growth of Phoma exigua in different concentration of the six sugars

Figure 2: The growth of Fusarium oxysporum in different concentration of the six sugars 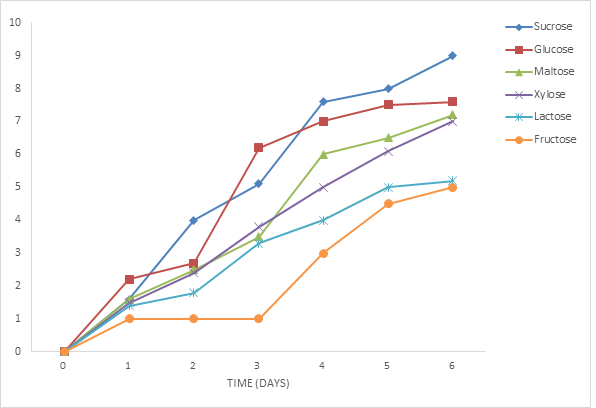 Figure 3: The effect of six different sugars on the growth of Phoma exigua 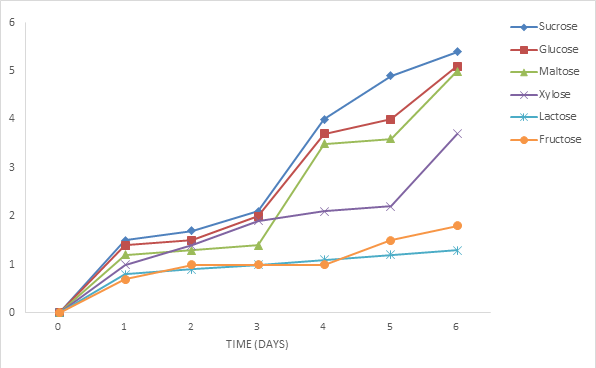 Figure 4: The effect of six different sugars on the growth of Fusarium oxysporum

Phoma exigua causes a number of diseases which includes damping off, leaf spots, and stem of cowpea and other crop plants while Fusarium oxysporum causes seed rot and stunted growth in cowpea and other crop plants. All the sugars supported the growth of P. exigua and F. oxysporum. Carbon sources are needed for structural purpose, respiration and the major structural component of fungal cells required for their growth and development which must be available in large quantities if all other physiological factors are favourable [6,10]. Also, living organisms require about 40 elements for their successful and normal growth among which carbon plays the key role. Carbon is of great significance because fungi and most bacteria being chemotrophs obtain their energy requirements from catabolic degradation of one or other carbon containing ingredients of the cell. According to [11], fungal growth is totally absent in the absence of carbon sources. The basic carbon components of the host are important for pathogenic microorganism [12]. Carbon sources such as Trisaccharides and disaccharides which include sucrose, maltose and lactose can be used by fungal species depending on the ability of the organism to produce appropriate hydrolytic enzymes [6]. This is in agreement with our findings which explains why sucrose supported the highest growth rate of all the three disaccharides (or even out of all sugars used as carbon sources in this study) it could be said that P. exigua and F. oxysporum possessed the ability to produce appropriate hydrolytic enzymes necessary for the breakdown of sucrose. Glucose is the preferred sources of carbon source for majority of fungi (even microbes), this hexose sugar sometimes interferes with the utilization of other carbohydrates. The phenomenon is referred as “glucose effect” according to [12]. The growth study of P. exigua and F. oxysporum using natural media (Potato Glucose Agar, Potato Sucrose Agar, Potato Maltose Agar, Potato Xylose Agar, Potato Lactose Agar and Potato Fructose Agar) revealed that Potato Sucrose Agar at its different concentration supported the highest growth of P. exigua and F. oxysporum followed by PGA, PMA, PXA, PLA and PFA supported the least growth in this study. [13] stated that the type of culture media and their chemical compositions significantly affected the mycelia growth rate and conidial production of Phoma exigua. This confirms the report of [14] that among seven carbon sources tested, sucrose was the best one used by all F. oxysporum f. sp. cubense.  However, this is in contrast with [10,15] who reported that maltose and starch showed significantly highest growth of F. oxysporum f. sp. carthami among the sources tested followed by glucose, fructose, sucrose and manitol. Natural media are preferred by fungi because they normally contain certain metabolites required by certain fungi for proper growth and development [16]. It has been known that growth and reproduction are frequently poorer in synthetic media than on natural media, the ability of the fungi to utilize it will depend on enzyme metabolism, environmental condition and other factors [17], reported the effect of concentration of carbon sources on growth of fungi generally and maintained that as concentration of carbohydrate in the medium is increased, the economics co-effient declines although more sugar may be utilized, the dry matter does not increase proportionately. This agrees with the result of this study where it was observed that increase in carbon concentration resulted in insignificant increase in mycelium products but the increase was not proportional [18], reported that increase in carbohydrate beyond optimum limit result in an absolute as well as relative decrease in growth which corroborate with our findings from this study. The use of different carbon sources vary from fungi to fungi, these variations is due to ecological location, species, environmental factor and enzymes action.

Our findings from this study showed that P. exigua increased in growth than F. oxysporum, also the organisms grew best in concentration equivalents to 20g per litre of each sugar therefore P. exigua and F. oxysporum must be grown in media which has the equivalent of 20g of sugar as the sole carbon source.