Methods: We retrospectively enrolled five consecutive patients who visited the urologic department for urologic disease from January 2016 to October 2016. All cases were followed up at least 12 months postoperatively. Of these, two renal mass, two adrenal tumors and one ureter stricture were reports.

Result: There were no significant differences between the characteristics of these groups. (p<0.05) The total complications and bleeding did not tend to difference to the discovered between the multiple port laparoscopic surgery. Postoperative length of stay and outcome were no difference then before data.

Single port retroperitoneoscopy is used commonly worldwide in urologic surgery. It is a minimal invasive laparoscopic procedure using endoscopy, widely applied in almost all urologic organ [1, 2], and also Gynecology organs [3, 4]. Recently, cases of partial nephrectomy or non-ischemic partial nephrectomy using this skill have also been reported [5-7]. This surgery has good post-operative outcomes while reducing the invasiveness of conventional open surgery and multiple trocar scars [5, 8, 9]. Thus, many medical centers worldwide have been developing this technique in urologic surgery ever since 2008 [7-11]. In this study, we pointed out that old age and poor performance patients whose condition is not suitable for infusion of CO2 on the peritoneal cavity. We propose cases to share new surgical methods for urologic disease. This case series study is aimed to evaluate the surgical outcomes of patients with Gassless single port retroperitoneoscopy surgery in urologic disease. To the best of our knowledge, these is no study that measurements the effect of gassless single port retroperitoneoscopy surgery in urologic disease.

From January 2016 to October 2016, a total of 5 patients received Gassless single port retroperitoneoscopy surgery in our Chang Gung Memorial hospital-LinKo. The including criteria were: (1) age more than 20 years old or older; (2) have urologic disease which needed surgery; (3) without medical history of complication diseases (Table 1). In the renal surgery group, two renal tumor patients receiving partial nephrectomy, off these, one right 5cm cystic tumor and the other left 2 cm solid tumor, as shown in Figure 1. One left ureter stricture with hydronephrosis was undergone ureteroureterostomy surgery and two adrenal tumor were undergone for adrenalectomy, with image shown in Figure 2. The operative time is from 90 to 186 minutes, and the patients were hospitalized for 3 to 7 days. Every patient underwent thorough exams including blood tests and image studies by CT, with clear lesion sights as seen in figure 1 and 2. All of the patients were under general anesthesia with lateral decubitus position. 2-D rigid laparoscope (Olympus, Tokyo, Japan) or 3-D head-mounted display system (Shinko Optical, Tokyo, Japan, and Endoeye flex 3D deflectable videoscope, Olympus) were used during surgery. 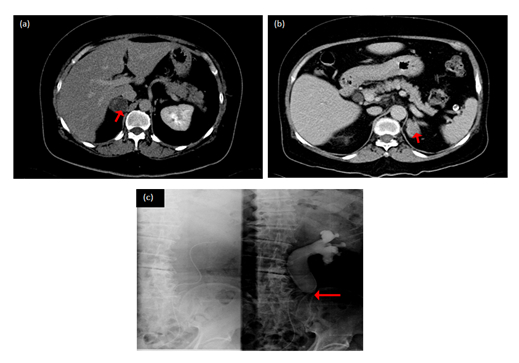 All patients received single port retroperitoneoscopy placed in lateral decubitus position. A 4 cm incision wound was made under 12th rib (Figure 3) and minlaparotomy into retroperitoneal space. Once we established 4 cm retroperitoneal space, and then enter the retroperitoneal space. We used 10 mm trocar one and 5 mm trocar two instrument for the surgery. In partial nephrectomy for renal tumor, Gerota fascia was opened and the tumor located. After dissecting the ureter and renal pedicle and exposuring the tumor, ultrasound was used to define the margin, depth and size of the tumor. Non-ischemia partial nephrectomy method was used without clamping renal pedicles. Ultrasonic coagulating device (Harmonic; Ethicon, Cincinnati, OH, USA) was used for excision of the tumor with a margin of at least 0.5 cm. In the adrenal and ureter group, retroperitoneal approach was used with same methods. 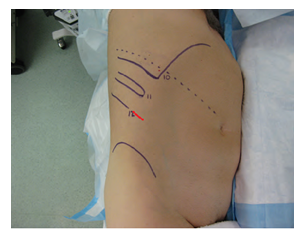 A total of five patients with received Gassless single-port retroperitoneoscopy surgery. The mean age was 67 years in the surgical group, respectively. In both cases of partial nephrectomy for renal tumor, negative margin was achieved with blood loss less than 250 ml. The pathological report of renal tumor showed T1 and complete resection. Drainage tube was removed after 5 days and length of hospital stay was around 7 days. There was neither blood transfusion nor complication. Both patients are now under regular clinical follow up with no renal function deterioration. Both cases of adrenalectomy and the case of ureteroureterostomy were performed smoothly with also free margin and 10 to 50 ml blood loss. All 3 patients recovered well and were discharged after 3 days of hospitalization. According to the Gassless retroperitoneoscopy surgery and the practice of our department, a week of medication treatment was given before further follow up.

Minimal invasive surgery is the mainstream surgery in the world [10]. If the patient has cardiovascular disease, there is no way to used CO2 into the peritoneal cavity for long -time surgery. Gassless single port retroperitoneoscopy is an effective surgery allowing the patient to achieve fast recovery and return to normal daily activity. This case series reports are an application of our experience to share and that the procedure is feasible. In non-ischemia partial nephrectomy patient, blood loss is controlled to less than 250 ml with no blood transfusion needed and no cases of complication were reported. The mean operative time is 3 hours and means hospital stay is less or equally to 7 days. Blood loss was less than 50 ml adrenalectomy and ureteroureterostomy with hospital stay of 3 days, all without complication. This indicates that apart from old age, poor performance and not suitable for infusion CO2 to the intraperitoneal space. It provides another option when considering minimal invasive surgery. From our experience, this is the development of a new surgical technology for urologic disease. Gassless retroperitoneoscopic surgery is a safe, effective and worth promoting surgery. This new surgical procedure is not just a safe operation but also a patient whose condition is not suitable for infusion of CO2 on the peritoneal cavity. Furthermore, more cases are needed for further evaluation of the procedure in the future.

There are some limitations in this study first, only five cases were included in this study; therefore, we do not know whether more cases will cause the same effect in younger and old patients. To study the clinically significant risks requires a much larger sample size.

Gassless single-port retroperitoneoscopic surgery is a safe, effective and worth promoting surgery. In patients with a urologic disease who considered received laparoscopic surgery and patient who are high risk for CO2 infusion, Gassless single-port retroperitoneoscopy surgery may did not worsen outcome results. Furthermore, more cases are needed for further evaluation of the procedure in the future.

This report was not funded by any specific grant from funding agencies in the public, commercial, or not-for-profit sectors.

The authors report no conflicts of interest in this work.