Intrinsicallydisorderedproteins (IDPs) lack a defined tertiary structure, yet they play key biological roles. The IDPs are over represented in signalling and transcription regulatory networks which involve hubs having several protein partners [1, 2].

The WRKY domain is characterised by the conserved amino acid sequence WRKYGQK at its N-terminal end, with a zinc-finger-like motif. The WRKY domain is found in one or two copies in a superfamily of plant transcription factors involved in the regulation of various physiological processes, including pathogen defence, response to salt stress, response to cold, response to wounding, salicylic response and the biosynthesis of secondary metabolites. The WRKY domain is required to DNA binding. WRKY TFs are structurally classified into three main groups (I, II and III), and also multiple subgroups (e.g. IIa, IIb and IIc, etc.) based on the number of WRKY domains [5].

The dataset was retrieved from the plant transcription factor database Plant TFDB 5.0 [6].

The binding regions prediction was used by ANCHOR tool (http://anchor.enzim.hu/) [8], which is based on the IUPred program mentioned above. Anchor predicts binding regions located in disordered proteins from the amino acid sequence.

The software IUPred and ANCHOR were requested from the authors and were compiled and executed locally.

The topological and statistical parameters of networks have been analysed using Cytoscape (version 3.5.1) [10].

The overall disorder contents of WRKYs in O.sativa, S.bicolor, Z.mays, T.aestivum, H.vulgare and A.thaliana are listed in Table1. These data clearly show similar mean content of disorder and of disordered binding regions between WRKYs analysed in this study. By grouping proteins according to the percentage of predicted disorder of their sequence, we found that the higher disorder content (>30%) of WRKY proteins is within the interval [30-60%] (Figure 1(A)) and (Supplemental file1).

Prediction of disordered binding regions (DBRs) showed that the average number of DBRs per protein was alsosimilar among studied species (Table1). When proteins were grouped according to intervals of DBR residues content,we found higher number of WRKYs in the [5-10) interval excepting T.aestivum (Figure 1 (B)) and (Supplemental file 1). 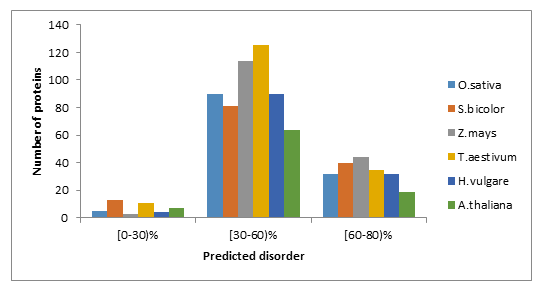 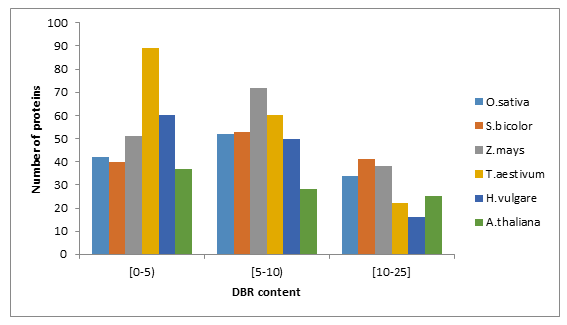 3.2 Location of DBRs within proteins

Figure 2: Schematic representation of disorder regions (in pink) flanking WRKY domain (in green) (a) Protein with one WRKY domain, (b) protein with two WRKY domains.

Based on genomic context, high-throughput experiments, co-expression and text mining, protein-protein networks related to WRKYs in O.sativa (Figure 3), S.bicolor (Figure 4), Z.mays (Figure 5), H.vulgare (Figure 6), T.aestivum (Figure 7) and A.thaliana (Figure 8) were constructed. We then analyzed the topological features of these networks. These parameters are listed in table 2 and in supplemental file 3.

The highly ranked nodes, namely hubs, are identified by combining degree distribution and betweenness centrality measures. In all studied species, we have noticed that these hubs have high disorder content and disorder binding regions (DBRs) allowing them high flexibility and interaction with multiple partners, of which participate in different functions. 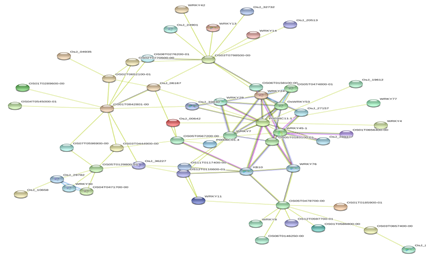 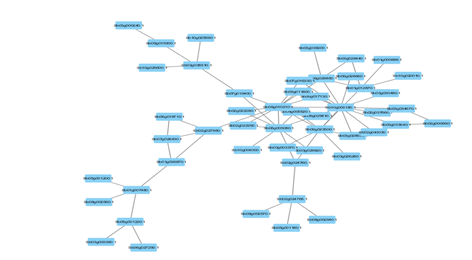 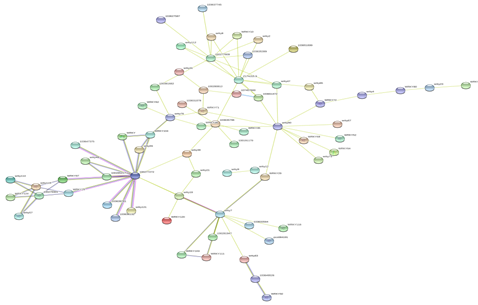 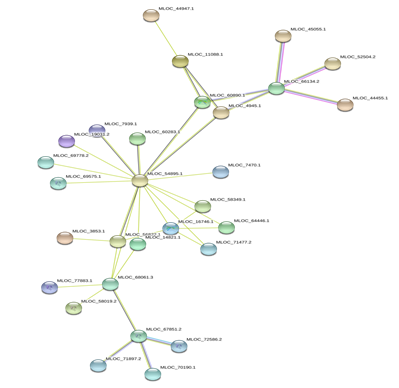 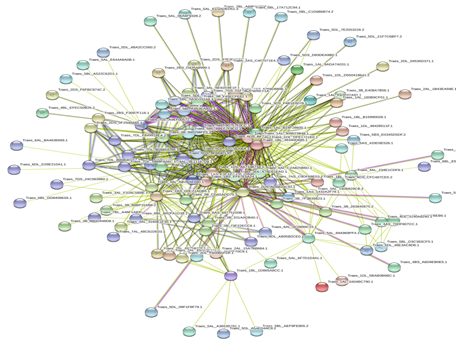 3.5 Evolutionary conservation of intrinsic disorder of WRKYs in cereals

We noticed that in spite of the strong evolutionary conservation of the WRKY DNA-binding domain, the flanking sequences of proteins are highly divergent, which might reflect their different functions. 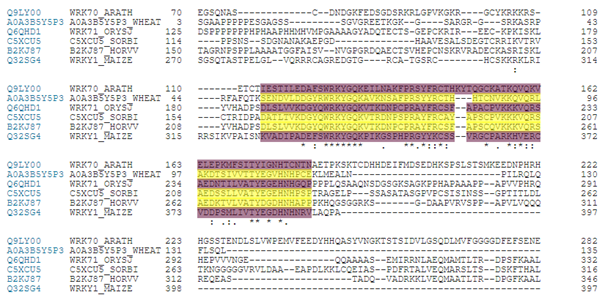 Figure 9: Multiple alignment of WRKY domain and flanking sequences of some members from A.thaliana, T.aestivum,O.sativa, S.bicolor, H.vulgare and Z.mays performed by clustal O [19]. Domain and DNA-binding sequences are highlighted in yellow and purple respectively.

To understand whether the intrinsic disorder is evolutionary conserved among studied species, we evaluated the evolutionary relationships between few AtWRKYs (from Group I, Group II and Group III) and their orthologs in O.sativa, S.bicolor, Z.mays, T.aestivum, H.vulgare (Figure10). 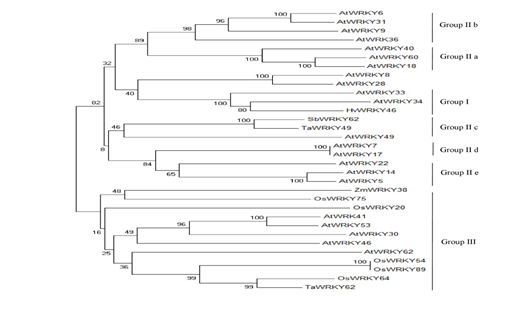 Figure 10: The phylogenetic tree of some WRKY proteins in the studied species.

The results indicated that WRKY family members within the same group, having similar functions, have also similar disorder content and DBR numbers among the species (Table 3).

Table3: Some WRKYs used in the phylogenetic analysis.

This study has aimed to explore the protein disorder in the WRKYs in O.sativa, S.bicolor, Z.mays, T.aestivum, H.vulgare and A.thaliana. We found that these proteins have similar disorder content, DBR numbers and biological processes among these species. Similar conclusions were reached by performing the disorder analysis on the complete proteomes of these species [12,13]. The results have also shown that the WRKY domain has regions of conserved disorder as well as the flanking disordered sequences. This indicates that disorder tendencies are kept in these proteins, suggesting that their function depends on disorder such as in protein-protein/DNA interaction. By examining the protein-protein interaction networks of the WRKYs in these species, we found that these networks are highly connected by hubs, having a higher disorder content, particularly important for flexible binding with many interaction partners allowing thus multiple functions. Hereafter, some examples are discussed.

In agreement with previous report, we found that AtWRKY33 acts as a one of the hubs in the protein-protein interaction in the WRKYs of A.thaliana [14]. AtWRKY33 (disorder content=0.65). Moreover, AtWRKY33 is involved in the regulation of the defense pathways mediating responses to P. syringae and necrotrophic fungal pathogens [15]. It is also involved in response to salt stress and abscisic acid (ABA) signalling [16].

In this study, we have provided a comparative analysis of the protein disorder of WRKY transcription factors in O.sativa, S.bicolor, Z.mays, T.aestivum, H. vulgare, and A. thaliana. Interestingly, we found similar and conserved disorder features such as the disorder content, the disorder binding regions (DBR) numbers and the Gene ontology including biological processes, molecular function and cellular components. The data provided here points towards the important role of the disorder of WRKYs in different biological processes notably in stress tolerance, deserving hence further investigation and experimental validation.

This work was supported by the Ministry of Higher Education and Scientific Research, Tunisia.

The authors declare that they have no conflicts of interests.