Effects of Processing Technologies on the Levels of Chlorogenic Acid, Gallic Acid and Theanine in Selected Kenyan Tea Cultivars by HPLC-PDA

Chlorogenic acid (CGA) one of tea biomolecules is a natural antioxidant that neutralizes free radicals in the body. It has also anti-obesity, anti-atherosclerotic and anti-cancer properties. Gallic acid exists in form of free acids and esters in plant material. This ubiquitous chemical is one of the many biologically active phenolic compounds of plant origin. Theanine a non-protein amino acid also called L-theanine is speculated to increase the levels of GABA, serotonin and dopamine. It has been used as a nutritional supplement in reducing stress, causing feelings of relaxation and improved mood. The aim of this study was to determine the variation of the levels of CGA, GA and theanine with processing technologies. Six tea cultivars TRFK 6/8, TRFK 11/4, TRFK 12/2, TRFK 31/8, TRFK 54/40 and TRFK 306/1 were selected for use in the study. Their leaf was processed to obtain CTC and orthodox tea products with green and black tea types being made. Profiling was done using High Performance Liquid Chromatography (Shimadzu Japan) equipped with photo-diode array detector (SPD-M20A). Graphical representation of the mean levels of Chlorogenic acid, Gallic acid and L-theanine contents was done using Microsoft® Excel, version 2010. Standard error of the mean was used to determine levels of significant differences. The result showed that TRFK 306/1 had the highest levels of CGA for both CTC and orthodox processing techniques while TRFK 12/2 had the lowest levels. In general, the levels were higher in black teas than in the green tea types. The levels of GA were in the range of 0.28-0.51% in green teas and 0.28-0.55% for the black tea types. At the cultivars level, black teas had significantly high levels of GA than the green teas. The theanine levels ranged at 0.97-1.87% for green teas and 0.79-1.47% for the black tea types.

ea originated in the Yunnan region during the Shang dynasty as a medical drink [1]. It was first introduced to Portuguese priests and merchants in Lebanon during the 16th century [2]. Drinking of tea became famous in Britain during the 17th century and later the British introduced tea production and consumption to India so as to compete with Chinese monopoly on tea [3] and this was then spread to other parts of the world. There are five major types of tea in the world based on the processing methods: white, green, oolong, black and Pu-erh [4]. Tea (Camellia sinensis) is the second most consumed beverage in the world, after water and it is the only food product known to contain substantial levels of the catechins [5]. The high consumption of tea is attributed to richness in important substances that have antioxidant, stimulating, calming properties, minerals and other divours health benefits [6]. In addition, numerous beneficial medicinal properties due to its polyphenolic content has been reported including; antibacterial, antimicrobial, anti-diabetic. he main components present in green tea are polysaccharides, flavonoids, vitamins B, C, E, gamma-amino butyric acid, fluoride and caffeine [7]. Tea leaf contains 2-4% of caffeine which stimulates the cerebral cortex and also causes irritation of gastrointestinal tract and sleeplessness for certain people [8]. The major catechin compounds of green tea are epigallocatechin (EGC), epicatechin (EC), epigallocatechin gallate (EGCG) and epicatechin gallate (ECG), of which EGCG is the major constituent and the most abundant one, representing 50-80% of the total catechin content. Catechins contribute to the characteristic bitter an astringent taste [9]. Phenolic acids and their derivatives are widely distributed in plants, many being essential metabolites. Chlorogenic acid (CGA) is one of the atmost extensively distributed phenolic derivatives, an important biosynthetic product and natural antioxidant which neutralize free radicals in the body. It has also been implicated in weight loss and exerting an anti-obesity effect [10]. The acid is a combination of two molecules comprising a Caffeic acid molecule bound to a Quinic acid moiety. Gallic acid a phenolic component of tea occurs in tea in free and esterified forms and along its quinic acid ester, theogallin, are the most abundant simple polyphenols present in tea [4]. Gallic acid has exhibited biological activities including showing anticancer properties and acting as a powerful antioxidant that neutralises free radicals in the cells. Theanine a major amino acid component in teas was initially identified as a ninhydrin?reactive substance. It can be found in proportions greater than 50% of the total amino acids in tea leaves and is in the developing shoot tips, where it acts as the chief source of nitrogen during alkaloids synthesis. Additionally, is an important precursor for the biosynthesis of flavonols in tea leaves [11]. Moreover, it is known to reduce blood pressure and regulate the physiological levels of norepinephrine, serotonin, 5?hydroxyindoleacetic acid, and dopamine [12].

Figure 1: Chemical structures of (a) Chlorogenic acid, (b) Gallic acid and (c) Theanine.

2.0 ± 0.01 g of the sample was weighed into aluminium dishes and heated in an oven at 103°C ± 2.0°C for 4 hours to obtain constant weight. The samples were weighed again and moisture content was then determined by subtracting the final weight from the initial weight, computed and expressed as a percent.

Five grams of the finely ground sample was weighed into a 250 mL conical flask and 150 mL of boiling 50% methanol/water (V/V) (MeOH) added then allowed to brew for 20 min on a magnetic stirrer (500 rpm). The tea brew was allowed to cool down, filtered using membrane filters into test tubes. 1 mL of sample was pipetted into 50 mL volumetric flask and made up to volume with 50% methanol/water (V/V) before transferring to vials ready for analysis.

One gram of a finely ground sample was weighed into a 250 mL conical flask and 100 mL of boiling double distilled water added then allowed to brew for 5 min on a magnetic stirrer (500 rpm). The tea brew was allowed to cool down then filtered into 100 mL volumetric flask and made up to volume with cold double distilled water before transferring to vials ready for analysis.

A standard stock solution was prepared by accurately weighing 25 mg in 1 mL of HPLC grade ethanol. From the stock, six working standards with concentrations of 3.92, 7.84, 23.52, 39.2, 54.88 and 78.4 mg/L were prepared by serial dilution, by use Hamilton micro litre syringe into 25 mL volumetric flask. The working standards were run in HPLC and used to develop the calibration curve.

he standards used were gallic acid. 0.1 g of gallic acid monohydrate (M.W. 188.14) was weighed into 100 mL one-mark volumetric flask, dissolved in water and diluted to the mark before mixing. The stock solution was diluted with double distilled water to prepare the standard solutions in the concentration range of 5-100 mg/L. as shown in Table 1.

Table 2: Theanine standard solutions in the concentration range of 5-100 mg/L.

A Shimadzu LC 20 AT HPLC fitted with a SPD-20 uV-Visible detector and C6 (250 × 4.6 mm) column was used for determination at 278 nm. The solvent systems for gradient elution included: Mobile phase A (9:2:89 (V/V/V) acetonitrile: acetic acid: EDTA and mobile phase B (80:2:18 (V/V/V) acetonitrile: acetic acid: EDTA at a flow rate of 1ml/min. The column temperature was set at 35 ± 0.5°C and sample injection volume of 20 µL used. The conditions for the binary gradient was set at 100% solvent A for 10 min then over 15 min a linear gradient to 68% mobile phase A, 32% mobile phase B and held at this composition for 10 min. The conditions were again reset to 100% mobile phase A and allowed to equilibrate for 10 min before the next injection.

A Shimadzu LC 20 AT HPLC fitted with a SPD-20 uV-Visible detector and C18 (250 × 4.6 mm) column was used for determination at 210 nm. The solvent systems for gradient elution included: Mobile phase A (double distilled water) and mobile phase B (100% acetonitrile) at a flow rate of 1 mL/min. The column temperature was set at 35 ± 0.5°C and the injection volume of 20 µL used. The conditions for the binary gradient was set at 100% solvent A for 10 min then the next 8 min was wash time with 20% mobile phase A and 20% mobile phase B. The next 20 min was conditioning with 100% mobile phase A before the next injection.

L-theanine quantitation was done using the regression equation of the L-theanine calibration curve obtained by plotting the concentration of L-theanine in the working solutions against theanine peak area. The theanine content was computed and expressed as a percentage by mass on a dry matter basis using the relation in equation 1.

Gallic acid and Chlorogenic acid quantification was done by generating standard calibration curves. The equation of the standard curves was used to determine the levels in the sample.

3.1 Effects of processing technologies on the levels of chlorogenic acid in selected Kenyan tea cultivars 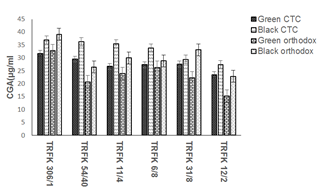 Studies have shown that chlorogenic acids qualitative and quantitative composition is various and dependent on plant parts, plant physiological stage, condition of storage and plant processing especially when processing is accompanied by heat and/ or enzymatic treatment [14]. From data generated in this study it can be shown that green and black teas can be a dietary source of chlorogenic acid.

Table 3: Levels of chlorogenic acid for both CTC and orthodox tea in selected cultivars.

3.2 Effects of processing technologies on the levels of theanine in selected Kenyan tea cultivars

Studies have shown that supplementing with L-theanine increases the frequency of alpha brain waves in humans leading to relaxed feelings and mental alertness [15]. Additionally, L-theanine may have an effect on anxiety and memory. Due to the health benefits associated with tea biomolecules, there is need to investigate theanine levels based on processing technologies in tea. Figure 3 shows the variation of the levels of theanine with manufacture technologies for selected Kenya tea cultivars. 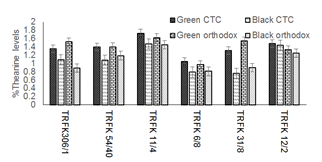 Figure 3: Variation of levels of theanine in selected tea cultivars with manufacture techniques.

3.3 Effects of processing technologies on the levels of gallic acid (GA) in selected Kenyan tea cultivars

eas can be classified according to the degree of fermentation, which has been reported to affect their levels of bioactive components [18]. In this study, effects of processing technologies on the levels of gallic acid (GA) in Kenyan tea cultivars of TRFK 306/1, TRFK 54/40, TRFK 11/4, TRFK 6/8, TRFK 31/8 and TRFK 12/2 was investigated. The manufacture technologies included CTC and orthodox processing for both green and black teas. Figure 4 shows the levels of GA in the different tea cultivars for the CTC and orthodox processing techniques. 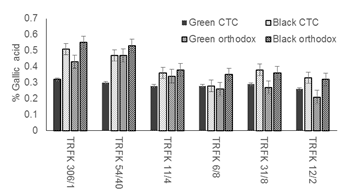 ea is a popular beverage almost all over the world with phytochemicals that are of importance in fight against diseases. Because of the growing lifestyle disease health concerns mainly due to reactive oxygen species (ROS) during food metabolic process there is need to study plant biomolecules that are related to healthy living. From the findings in this study, it can be concluded that:

Further research need to be done on the newly released TRFK cultivars especially the coloured cultivars since purple tea which is rich in anthocyanins consistently showed superiority in the levels of the biomolecules under the study.