Structural integrity and functional properties of protein are governed by arrangement and side-chain nature of every amino acid constituting it. Substitution mutations have been observed in many proteins which are very important for cellular functions. The current study aims to understand the molecular basis of protein stability, and solubility using SOD1 enzyme where multiple point mutations are have been reported. Around 51 point mutations reported in the SOD1 enzyme were retrieved from ALSoD and HuVarBase databases. The mutations were grouped based on the properties of amino acid residue involved. The impact of mutations on SOD1 function was predicted using PROVEAN and changes in the structural stability induced by point mutation was evaluated based on free energy change using Foldx. Influence of mutation on SOD1 solubility was studied using CamSol Intrinsic web server. The mutations resulting from the substitution of polar and charged residues were found to influence functionally important state, free energy value and solvent interaction of the protein. This study hypothesizes that the physicochemical properties of every amino acid residue constituting protein, influence the stability and solubility of the protein. The future prospect includes establishing a correlation between these two properties to identify factors driving protein aggregation upon point mutation.

The structural dynamics of protein has been mainly governed mainly by its stability and solubility. However, these two properties are in turn influenced by amino acid residues with distinct physicochemical properties attributed to side-chain groups which are vital for maintaining the structural and functional integrity [1, 2]. At physiological pH 7.0, the side-chain group of amino acids are charged or uncharged depending on their pK values, which determines their solvent accessibility. The residues with charged groups like lysine (K), glutamine (Q) have more solvent accessibility as they are less buried; whereas residues like tyrosine(Y), isoleucine (I) with uncharged side-chains have less solvent accessibility and are more buried [3].

The ionized side-chain of amino acid residue in a protein contributes to attractive or repulsive interaction between neighboring charged surface residues and buried ionizable, carboxyl groups contribute to the stability of the protein by hydrogen and other interactions [4, 5]. Experimental work suggests the role of hydrogen bonding between amino acids carrying –OH group and side chains of neighboring amino acids as a contributing factor of protein stability [6].  Amino acids with ionizable side-chain groups, such as Aspartic acid (D), Glutamic acid (E) have shown to improve the solubility of the protein considerably [7]. The precise configuration of the protein as coded by the gene and structural organization of amino acids is essential for the functioning. The mutation of specific residues in certain proteins has been shown to promote protein aggregation, disrupt protein-protein interaction, and develop drug resistance. Such type of mutations has been considered as one of the contributing factors in the manifestation of neurodegenerative disorders such as Amyotrophic lateral sclerosis, Alzheimer’s disease, Parkinson’s disease, etc.[8]. Literature suggests the presence of multiple point mutations in SOD1 as one of the factors promoting the progression and pathogenesis of familial ALS [6]. ALSoD [9] and HuVarBase [10] databases provide point mutation data associated with SOD1. Although a lot of point mutations have been listed for SOD1 their exact impact on protein dynamics in terms of stability and solubility has been less explored [11]. In the present study, the impact of point mutations on protein function, stability and solubility has been analyzed using the SOD1 enzyme and thereby to study its potential association with protein aggregation leading to ALS as one of the possible factors.

The point mutations for SOD1 were retrieved from ALSoD and HuVarBase and were classified based on the nature of mutated amino acid. The wild type (WT) SOD1 sequence was retrieved from UniprotKB (P00441). The impact of mutations on the function of SOD1 was predicted for WT and 51 mutants using PROVEAN (Protein Variation Effect Analyzer) tool [12].

2.2 Analyzing the effect of mutations on structural stability:

The structure of SOD1 (1PU0) was retrieved from protein data bank (https://www.rcsb.org/).  All deleterious and neutral mutations predicted based on the Provean scores were subjected for free energy change (ΔΔG) calculations using the FoldX suite [13]. Prior to free energy calculation the WT structure was refurbished using the repair command. Interatomic clashes produced by the mutated residue with the residues in the vicinity were studied for selected mutants using the findClash function of UCSF chimera. Substitution mutations were induced in SOD1 using Dunbrack rotamer library [14].

2.3 Analyzing the effect of the mutation on solubility:

The impact of 51 point mutations on Solubility was predicted using CamSol Intrinsic web server. A solubility score for mutants above -1, when compared with WT, is considered to be more soluble while the score less than -1 is less soluble [15].

All the point mutations reported in SOD1 protein were listed from disease-specific database ALSoD, HuVarBase. Based on the nature of the side-chain group of amino acids, mutations were classified as polar (charged and uncharged) and nonpolar. Categorization has been listed in Figure 1.a. This variation in the properties of the amino acid side-chain was explored to group mutated SOD1 variants. Most of the mutations resulted from the substitution of WT nonpolar residue with nonpolar ones. Further categorization of point mutant based on their origin has been supplied as supplement data (Supplementary Figure 1.b) 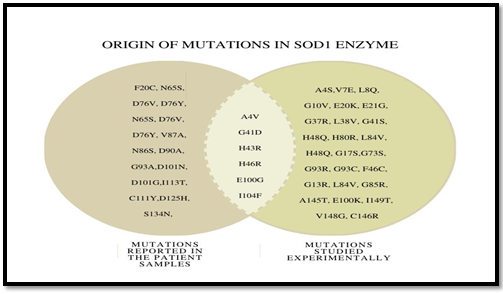 Figure 1.b: Origin of Mutations in SOD1 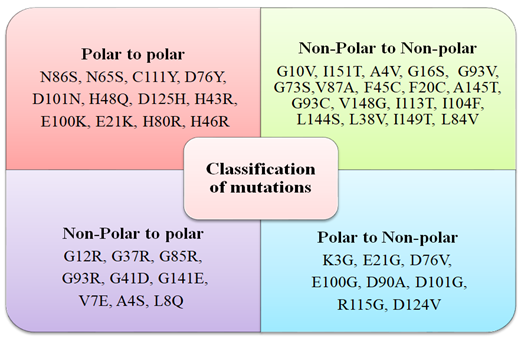 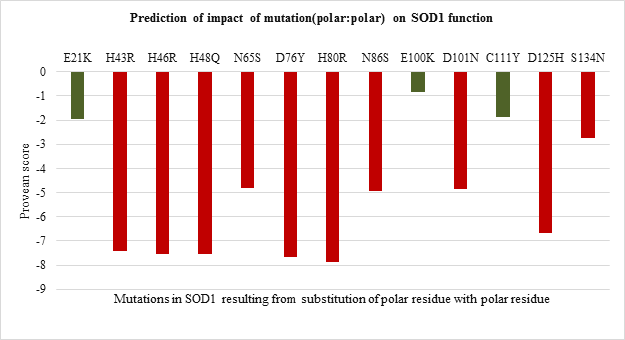 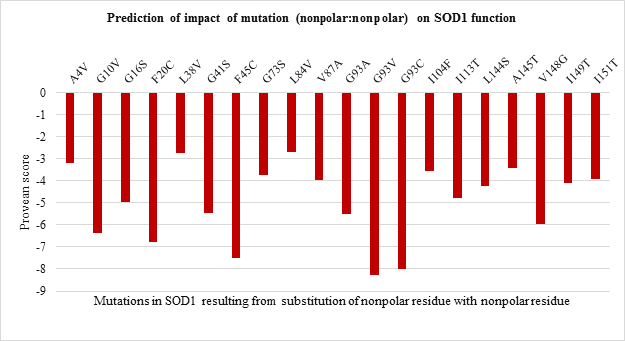 Impact of mutation on protein stability was evaluated based on free energy change calculations and inter-atomic interactions. Among polar to polar SOD1 mutations (Figure 3.a) it was observed that H46R has highest △△G values followed by S134N and H80R and point mutations E21K, N65S, D76Y, E100K and D125H were found to be stabilizing in nature.

Furthermore, interatomic interactions between the side-chain of mutated residue and neighboring residues were analyzed and represented in the form of pseudobonds [16]. The yellow colored bonds correspond to steric clash caused by atoms of mutated residue unveiling basis for destabilization. All destabilizing mutations show steric clashes at varying degrees (Figures 4 a-h). 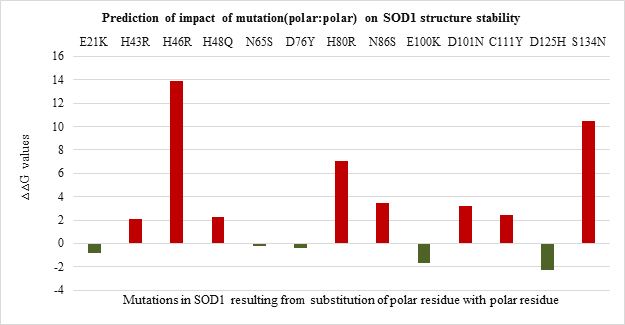 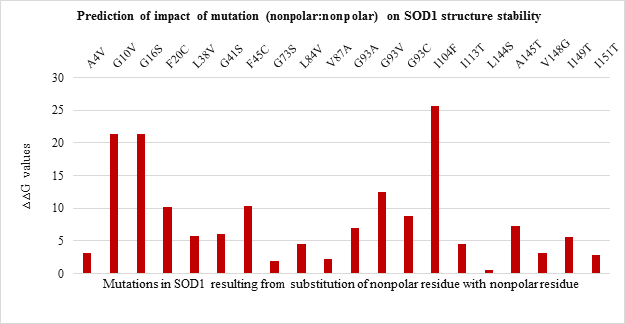 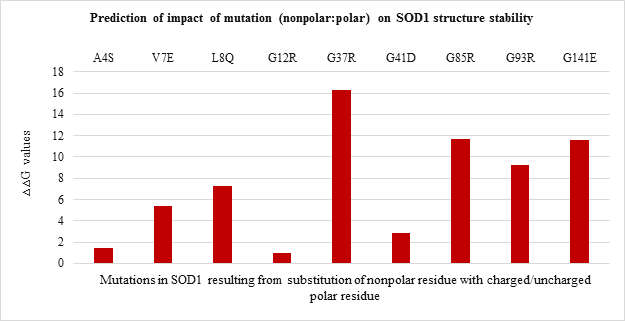 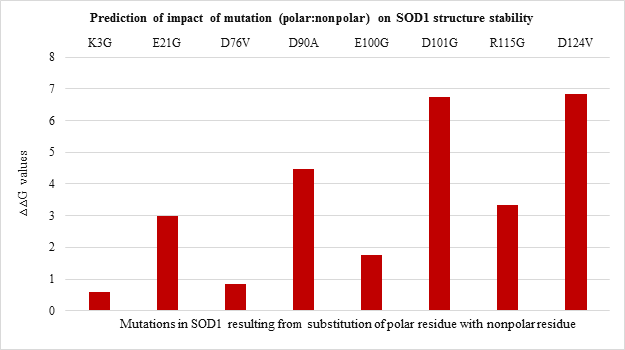 Mutations resulting from the substitution of the same residues drastically varied in their free energy change values and thereby differing in destabilizing effect. The analysis of interatomic clashes between mutated residue and neighboring residue revealed the basis of destabilization. The relative position, property of side-chain of mutated residue, and nature of neighboring amino acid found to influence the number of clashes caused by the mutated residue which in turn affected the stability of SOD1. For example, the clashes created by mutant G12R are less than clashes created by mutant G37R as the angle of rotamer, its position and surrounding amino acid residue varies.  (Figure 4. f and Figure 4.g)

3.3 Analyzing effect of mutation on solubility 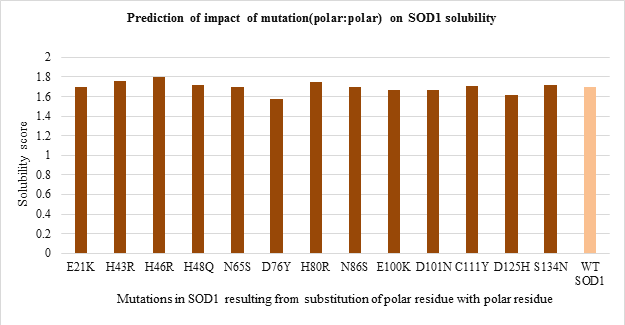 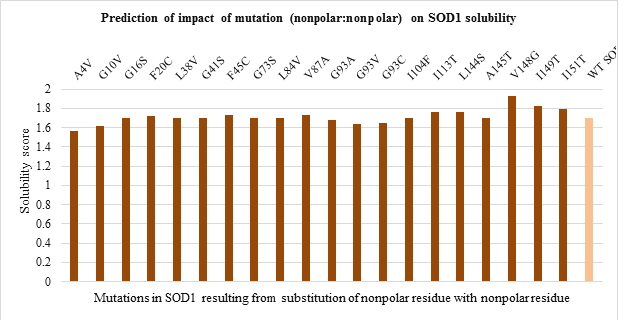 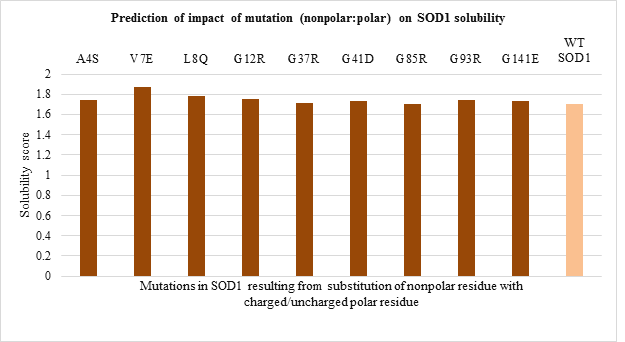 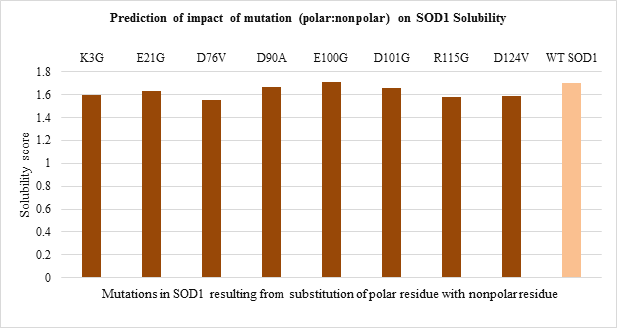 The structural and functional dynamics of protein is significantly influenced by the functional group of amino acids.  Point mutations in proteins alter this dynamism which in turn depends upon the type of point mutation [17-20].

Thus the current study is an attempt to unveil the contribution of amino acid residues based on the nature of side-chain group, position, and interaction with neighboring residue in maintaining the structural stability and functional properties. The 51 SOD1 substitution mutations were selected from the databases. Majority of the mutations belong to nonpolar to nonpolar category followed by polar to polar category. Least number of mutations belong to polar to nonpolar category. Studies on impact prediction by provean analysis showed most of the mutants being deleterious.  Irrespective of the nature of amino acid substituted, based on the provean score H80R, H48Q, H46R, H43R, D124V, D125H, G85R, G93V, G93C, G76Y are predicted to be more deleterious for SOD1 function. Among top 10 most deleterious mutations, H80R, H46R, H48Q and H43R are known to directly coordinate with Zn and Cu ions crucial for SOD1 activity, thus their substitution can impact SOD1 activity [21]. Whereas mutations G76Y, G85R, G93V, G93C, G124V, G125H resulted from the substitution of evolutionarily conserved residues can impact functional properties. Similar study was demonstrated by Zhang et al. 1992 where they reported no detectable or less activity of the human 5-lipoxygenase enzyme in which C-terminal conserved residues were mutated [22].  On the other hand, the neutral effect of E21K, D90A, E100K, C111Y mutants on SOD1 activity could be a result of the non-conserved nature of the residues that were mutated in the variants. The polarity, non-polarity, side-chain group bulkiness, and charge of amino acid residues seem to play a more important role over their conserved nature in case of structural stability of the SOD1 enzyme. The gain in the stability and relatively less destabilization of SOD1 resulting from the substitution of WT polar residue with another polar residue indicates they are vital for stability. In case of E100K, substitution of negatively charged glutamic acid (E) at 100th position with Lysine (K) has a stabilizing effect on the SOD1 structure. While substitution of positively charged histidine (H) with arginine (R) with the same charge has a less destabilizing effect than mutants from the same and other three (nonpolar to nonpolar, nonpolar to polar, polar to nonpolar) groups. Most of the mutations resulting from the substitution of the same polar residue with nonpolar residue and vice versa varied in their △△G values. Mutations like H80R, H46R, G37R, D124V were found to be more destabilizing which is apparently due to the difference in polarity and bulkiness of substituted residues whereas exceptions including H43R, G12R, D76V were found to be less destabilizing mutations. Inter-atomic clashes studied for the selected high and low destabilizing mutations resulting from substitution of same residues showed interaction with the neighboring residues. The analysis of inter-atomic interaction between mutated residue and side-chain residue in the nearest environment helps to identify the possible reason for SOD1 destabilization due to steric clashes. This study hypothesize, in addition to the physicochemical property of mutated residue, degree of freedom of rotamer selected, its relative position in three-dimensional space and nature of amino acid residues in vicinity governs the type of interactions mutated residue participate in. It was found that less destabilizing mutations create less steric clashes compared to high destabilizing ones. Considering the importance of the polarity of amino acid in structural stabilization of SOD1, its role in improving the solubility of the protein has been well studied for other proteins like RNase-Sa [17]. The current study also sheds light on the role of side-chain properties of amino acid residue and influence on protein solubility which can further influence its aggregation propensity [17, 20]. The solubility score determined by CamSol Intrinsic web server suggests that negatively and positively charged amino acids like aspartic acid, glutamic acid, glutamine, asparagine, arginine, and lysine can make mutant SOD1 more soluble than WT form [22-25].  Since mutants resulting from their substitution have less solubility score and mutant carrying them as substituent has a better solubility score. This observation holds true for all mutation groups. The key finding of the work suggests that polar / charged residues play an important role in maintaining the structural and functional dynamics of the protein. Furthermore, the present work opens up avenues to understand the effect of the accumulated mutation on the functional properties of the protein. Since the presence of SOD1 protein aggregates has been reported to play a role in the pathogenesis of familial ALS.

The authors have no conflict of interest.