Differences in Sagittal Balance in Patients with and without Degenerative Spondylolisthesis Who are Surgically Treated for Spinal Stenosis. A Comparative Study

1Department of Orthopaedics and Traumatology, General Hospital of Pyrgos, Greece

Bougiouklis Dimitrios, Patsiaouras Thomas. Differences in Sagittal Balance in Patients with and without Degenerative Spondylolisthesis Who are Surgically Treated for Spinal Stenosis. A Comparative Study. Journal of Spine Research and Surgery 2 (2020): 007-016.

Introduction: In pathogenesis of degenerative spondylolisthesis (DS) and its development, several predisposing factors have been advocated. However, the role of lumbar sagittal alignment has not been well studied yet. The purpose of this retrospective study was to analyze the sagittal spinopelvic alignment and to compare these parameters between patients with and without degenerative spondylolisthesis who were surgically treated for lumbar spinal stenosis.

Conclusions: In patients with degenerative spondylolisthesis, PI was significantly greater than that in patients without DS and PI had positive correlation with the percentage of slippage. Greater PI turns to be a predisposing factor to the development and the progression of vertebral sliding. On the other hand, patients who suffered by degenerative lumbar stenosis without sliding, have a normal PI. In patients with DS, a predisposing condition for an anterior displacement of L4 on L5, was represented by the increased vertical inclination of the S1 endplate. In these patients, segmental lordosis was increased at the levels above L4/L5.

Degenerative spondylolisthesis (DSL) and degenerative spinal stenosis (DSS) represent two different clinical entities with similar symptoms and clinical signs, but with peculiar demographic characteristics and radiographic findings [1]. The degenerative process which leads to lumbar stenosis is initiated by disc dehydration and bulging causing the narrow of the space and this one leads to an increased transfer of stress to the facet joints. This fact accelerates facet joint cartilage degeneration and osteophyte formation. The combination of degenerative changes in the disc and facet joints can lead to central canal or lateral recess stenosis [2]. Degenerative spondylolisthesis occurs mostly at L4/L5 in adults older than 40 years and it is defined as slipping of a lumbar vertebra with an intact neural arch (3). In pathogenesis and its development, several predisposing factors have been advocated. Some of them are sagittal orientation and osteoarthritis of the facet joints, hormone factors, ligament hyperlaxity, insufficiency of paravertebral muscles, increased body mass index and female sexual hormones [4-6]. On assessing pathological mechanism and treating degenerative disease of the spine, the spinal sagittal alignment is an important tool. Many studies have, primarily in the normal population, investigated sagittal balance, and it is well established that the shape and the spatial orientation of the pelvis determine the organization of the thoracolumbar spine. Pelvic shape is determined by a fundamental parameter, the pelvic incidence (PI) whereas pelvis spatial orientation is defined by two positional parameters, the sacral slope (SS) and he pelvic tilt (PT). However, few studies are referred to the impact of the spinopelvic sagittal alignment, especially the influence of the pelvic shape, as a factor that would be related to degenerative spondylolisthesis [7]. In 2005, Rousouly et al. classified four types of spinopelvic sagittal alignment [8]. In this classification type IV is characterized by a high pelvic incidence and sacral slope, associated with an important lumbar lordosis. In this type, S1 endplate orientation is relatively vertical, which could represent a predisposing factor for slippage of lumbar vertebrae. The purpose of this retrospective study was to analyze the sagittal spinopelvic alignment and to compare these parameters between patients with and without degenerative spondylolisthesis who were surgically treated for lumbar spinal stenosis.

A total of 68 patients with lumbar spinal canal stenosis, 34 patients with degenerative spondylolisthesis (group 1) and 34 patients without degenerative spondylolisthesis (group 2), were surgically treated for spinal stenosis between 200 and 2018. Group 1 consisted of 10 men and 24 women, and group 2 Consisted of 11 men and 23 women. The mean age was 64.5 years (range, 42-79) in group 1 and 67.3 (range, 43-82 years) in group 2, respectively. In every patient of group 1 the involved level was the L4/L5. According to Meyerding’s classification the slippage grade was evaluated [9] and was determined to be 67.6% grade I and 32.3% grade II. In group 2, the involved level was L3/L4 in 3 patients, L4/L5 in 14 patients, L5/S1 in 7 patients, L3/L4/L5 in 6 patients and L4/L5/S1 in 4 patients. All patients of both groups have sustained a surgical treatment after failure of conservative management for at least six months (Figure 1). From the study, the exclusion criteria were: previous spinal surgery, spinal disease (trauma or tumor), idiopatic or degenerative scoliosis, developmental spondylolishesis   and coxofemoral pathology. Both group were comparable in terms of gender and age. 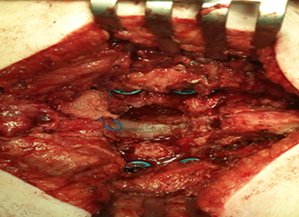 Figure 1: A intraoperative foto a patient with degenerative lumbar spondylolisthesis who underwent to wide decompression plus fusion. 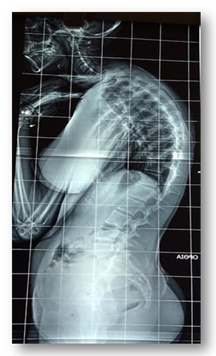 Figure 2: A preoperative lateral lumbar x-ray of a female patient with degenerative spondylolisthesis. The patient is standing with the hand placed on clavicles  and the hips and knees held in extension. With this protocol the thoracic and the lumbar spine, the sacrum and both femoral heads were visible for evaluation. 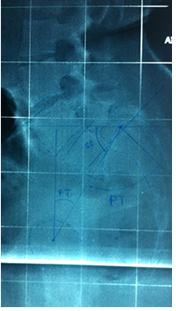 Figure 3: The spinopelvic parameters can by measured on pre-operative lateral view of lumbar spine as reported by Duval et al. 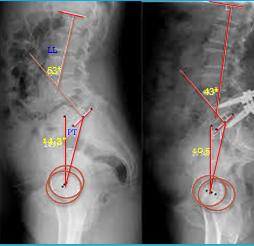 Figure 5: Pre- and post-operative radiographs of a patient with degenerative spondylolisthesis who underwent on posterior interbody fusion at level L4-L5. Postoperatively lumbar lordosis present a similar value to normal individuals.

Patients with degenerative spondylolisthesis have a greater pelvic incidence, lower segmental lumbar lordosis/PI ratio and relatively high propensity for sagittal imbalance compared with degenerative spinal stenosis patients. That means that a high PI may be a predisposing factor to the development of DS. Furthermore, there is a positive correlation between the pelvic incidence and the percentage of the slippage. Patients with degenerative spondylolisthesis have a significant loss of segmental lordosis of the caudal lumbar spine, which is partially compensated by hyperextension in the upper lumbar spine and pelvis back tilt. The degree of the correlation among the spinopelvic parameters differ between patients with DS and patients without DS. In the first ones, there is a strong correlation between the PI and the SS, rather than with the PT.

Authors declare no conflict of interest or any funding source received for this study.