Rapid industrialization over the past few decades has caused many adverse effects on the environment. Release of heavy metals into water streams is of major concern. Among many methods available for removal of heavy metals from water researchers have paid considerable attention on adsorption. Plant materials have been used as low cost adsorbents in many researches. Tea waste, rice husk, coir pith, corn cobs, sunflower stalks and many other biomass materials have been tested for the removal of heavy metals from wastewater [1-6]. However, most of the batch adsorption work is limited to determination of equilibrium data, kinetic and thermodynamic parameters. Mass transfer coefficient is an important parameter in any unit operation and less attention has been paid for this aspect in adsorption studies. Few researchers who have studied on mass transfer coefficient calculations have limited the studies to approximate methods and linear form of equilibrium isotherms [7-9]. Therefore, the objectives of this work are to investigate on removal of Cd and Pb using coir pith as an adsorbent, to determine mass transfer coefficients for the process and to analyze the results statistically.

Adsorption of Pb and Cd ions onto coir pith from the aqueous phase involves three stages [7-9];

t is the time in s, kL liquid film mass transfer coefficient in m/s and S is the surface area of the adsorbent per unit volume of the particle free solution (m-1).

At time t=0, Cs=0, C=C0 and hence the liquid film mass transfer coefficient is given by equation 2.

Liquid film mass transfer coefficient can be determined from the gradient of the C/C0 verses time plot at time = 0.

Overall mass transfer coefficient can be determined from the equation (4) obtained by rearranging and integrating the equation 3 between the boundary conditions; when t=0, C=C0, q=0, C*=0 and when t=t, C=C, q=q, C*=equilibrium concentration of solution with q where q is the solid phase solute concentration (mg/g) at time t.

Solute uptake (q) and C* are related by the equilibrium isotherm equations [5,7,17]. In this study Freundlich isotherm given by equation 6 was observed as the best fit and presented.

Hence, the C* value corresponding to any C value can be determined from equations (5) and (6) and the integral on the right hand side of the equation 4 can be determined graphically or analytically and KL can be calculated. Combining equations 4, 5 and 6, Equation 7 is obtained which can be used to determine KL when experimental data is available or to determine the time required forαgiven concentration drop when KL and equilibrium data are known.

Preparation of the Adsorbent

Coir pith (CP) was obtained from Sri Lankan coir mills. The coir pith was washed with hot water at 80°C several times until the water was virtually colourless. The bio mass was then washed with distilled water and were oven dried for 12 hrs at 85°C. The dried material was sieved and stored in sealed polythene bags. The fraction between 350-850 mm was used for all the experiments.

Synthetic wastewater solutions were prepared by dissolving analytical grade Pb (NO3) and Cd (NO3)2. 3H2O in distilled water to obtain 1000 mg of metal/L solutions. The solution was diluted to the required concentration for experiments. The pH of the solution was measured and observed as 5.5±0.5 and no chemicals were added to change pH. Our previous works on adsorption of heavy metal ions [5] have shown that biomass materials possess highest adsorption above pH 5.

Batch adsorption tests were conducted at room temperature 25°C by mixing known weight of adsorbent and solution of known single metal-ion concentration. The mixture was shaken inαmechanical shaker and samples of solution were withdrawn from the bottle at known time intervals and analyzed for the metal ion using atomic absorption spectrophotometer. Experiments were conducted to determine the kinetics and equilibrium data for adsorption of Cd and Pb onto coir pith.

The adsorption experiments were performed in duplicate to observe the reproducibility.

Atomic absorption spectrophotometer with an air-acetylene flame and hollow cathode lamps for Pb and Cd was used for metal ion analysis. The absorbance of the samples was read in triplicate. True and bulk densities of adsorbents were also determined using the specific gravity bottle method. The particle size was measured by sieve analysis.

Metal ion concentrations obtained from adsorption experiments were converted to mg of metal ion adsorbed per gram of adsorbent (q) values. Equilibrium data for adsorption of each metal ion onto coir pith was fitted to Freundlich isotherm with coefficient of determination (R2) values above 0.9 and the equations 8 and 9 were obtained for Pb and Cd adsorption onto coir pith respectively. Isotherm parameters will be used to determine the mass transfer coefficients in the subsequent sections.

Heavy metal ion concentration, C, asαfunction of time, t, data obtained from batch experiments for adsorption of Pb and Cd from single solute solutions were fitted to the exponential kinetic equation given by 10. The model parameters were determined by non-linear regression using Microsoft Excel Solver. Parameters thus obtained are presented in Table 1. Experimentally determined C/C0 verses time results are compared with fitted curves and presented in Figure 1 and 2. α and γ are dimensionless parameters and β is a parameter proportional to adsorption rate.

Hence, the equation 10 can be further simplified as equation 11 or equation 12;

New parameter b is defined as the concentration decay constant. γ depends on the adsorption capacity of the given solute onto the adsorbent. Higher the adsorption capacity the lower the value of theγand vice versa. This effect can be seen from the Figure 1 and 2 and the parameter values in Table 1. Adsorption capacity of Pb onto coir pith is higher than that for Cd and hence lower values of γ were observed for Pb compared to Cd. Further, sum of a andγvalues for a given test is very close to one in all cases tested as shown in Table 1. Equations of similar form have been presented by other workers for batch adsorption [9,15].

Parameters a, b and γ values vary with the initial solution concentration C0, and the parameters were fitted to non-linear functions of C0. A program was written in Python programming language to produce 3-D plots of C/C0 as a function of C0 and time. The surface plots are shown in Figure 3 and 4, and the effect of C0 on Cd and Pb adsorption rates are clearly visualize from the plots.

Table 1: Parameters of exponential kinetic equation (equation 10) for adsorption of Pb and Cd onto coir pith at 25°C 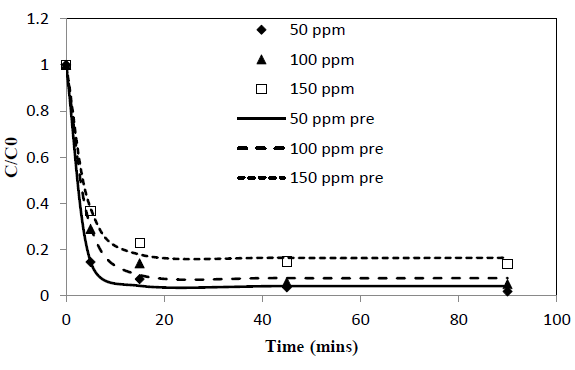 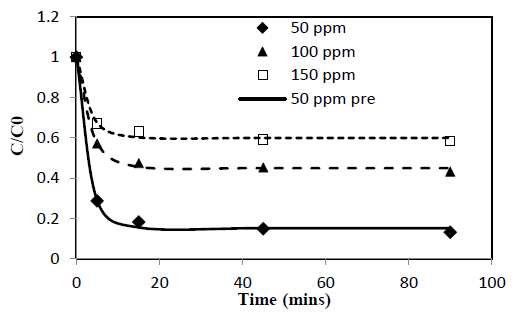 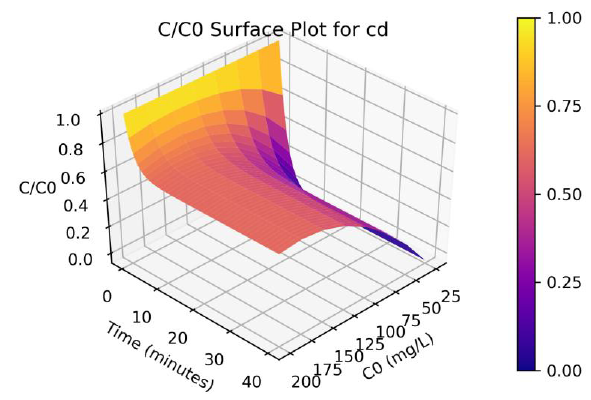 Figure 3: Surface plots of C/Co as a function of time and C0 for adsorption of Cd ions onto coir pith at 25°C, adsorbent dose =2.5 g/L 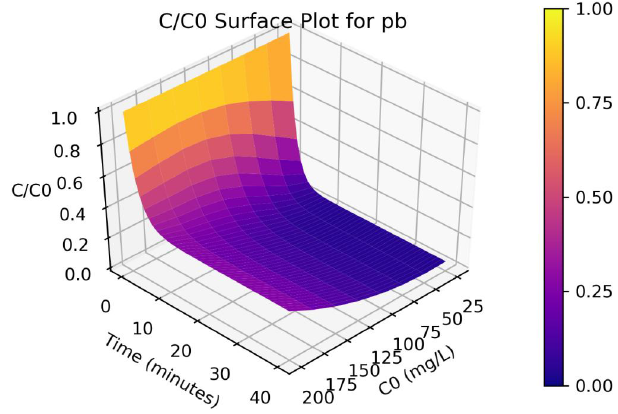 Figure 4: Surface plots of C/Co as a function of time and C0 for adsorption of Pb ions onto coir pith at 25°C, adsorbent dose =2.5 g/L

Liquid film mass transfer coefficient, kL was calculated as follows. Derivative of the equation 10 at time à0 is given by equation 13. Combining equation 2 and the equation 13, equation 14 is obtained and can be used to determine kL.

Table 2: Mass transfer parameters for adsorption of Pb and Cd ions onto coir pith at 25°C

Most of the previous work on mass transfer coefficient calculations have either assumed a linear isotherm or used the slope of the C/C0 vs time plot to determine the kL values (0 to 1 min) [8,13,20]. However, this is not accurate as the isotherms are not linear for most of the systems and further assumption Cs = 0 is valid only at t = 0. The kL values determined using the slope of the C/C0 vs t plot over the initial adsorption period are also presented in Table 2, and the results show that the use of gradient underestimates the kL value. This is because the slope is the average value over the initial period but not the exact value at t=0. Therefore, the proposed method (equation 13 and 14) in this work can be used to determine the kL value more accurately.

Further, the derivative of the equation 12, which is given by equation 15, can be used to determine the rate of change of concentration in the solution at any given time. 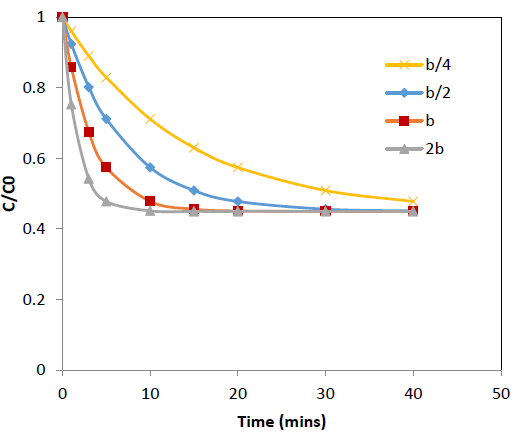 Figure 5: Effect of b, concentration decay constant on variation of C/C0 with time at 25°C for Cd adsorption onto coir pith; C0=r 100 ppm, adsorbent dose =2.5 g/L 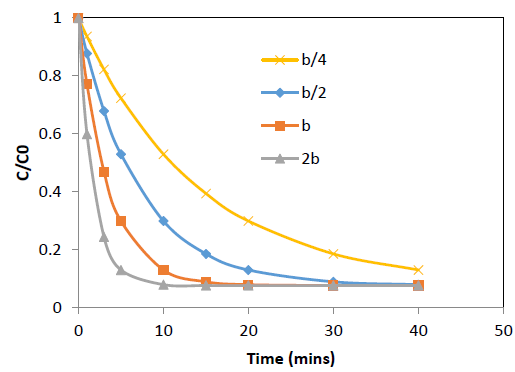 Figure 6: Effect of b, concentration decay constant on variation of C/C0 with time at 25°C for Pb adsorption

Overall liquid phase mass transfer coefficient (KL) values were calculated for Pb and Cd adsorption at various initial solution concentrations using equation 4 as follows. Solute concentration, C, as a function of time was obtained from the experiments. Solute uptake onto the adsorbent (q) were calculated from the material balance and the Freundlich isotherm equations were used to obtain the relation between q and C*. Integral on the right hand side of the equation 4 was evaluated using the trapezoidal rule. Overall liquid phase mass transfer coefficients thus calculated are given in Table 2. Nurbas et al. (2002) has obtained values of KL, similar range for Cu adsorption onto Ca-Alginate [14]. The overall liquid phase mass transfer coefficient (KL) values thus obtained can be used to determine the time required for a given degree of adsorption for a given adsorbent dose (w).

Spearman's correlation coefficient, (ρ) given by equation 16, measures the strength and direction of association between two ranked variables, in this study, initial solution heavy metal concentration, Co, and the mass transfer parameter.

Where di = difference in paired ranks and n = number of cases.

Further, the liquid film mass transfer coefficient kL, calculated by the method proposed in this work using the derivative of the C/C0 vs time function at t=0 was compared with the liquid film mass transfer coefficient determined by the gradient of the plot during initial adsorption period. The percentage deviation calculations show 45 to 60% deviation of the parameters calculated by two methods. This analysis further confirms that the use of initial gradient underestimates the kL vaue.

Adsorption of Pb and Cd ions from single ion aqueous solutions onto coir pith was studied. Experimental results show that the adsorption capacity of Pb onto coir pith is higher than that for Cd. Study on the variation of heavy metal ion concentration in the solution with time shows a rapid drop at the initial stages of the adsorption process leading to an exponential decay. New parameter, concentration decay constant, b, was defined to estimate the adsorption rate. Liquid film mass transfer coefficient was determined by a novel accurate method to overcome the inaccuracy due to underestimation of the value obtained using the gradient of the C/C0 vs t plot. Overall liquid phase mass transfer coefficient was determined by the graphical method and the method overcomes the errors due to assumption of linear isotherm equation. Mass transfer coefficients calculated are in the same order of magnitude as the values obtained by other workers for similar materials. The Statistical analysis of the mass transfer coefficients shows that the variation of the parameters with the initial solution concentration is significant for Pb.