Cystic mature teratomas presenting in the spine are rare, comprising less than 0.1% of all spinal tumors. They arise from all three germ cell layers and usually accompany other congenital abnormalities. Spinal teratomas are more common in children as compared to adults and are usually associated with spinal dysraphism. Dermal Sinus is a closed type of Spinal dysraphsim, lined with epithelium and are mostly associated with Dermoid, Epidermoid and Posterior arch defect [1]. We present a case of an infant with recurrent meningitis. His examination was remarkable for a lumbar dimple. Imaging revealed a dermal sinus track continuous with a dumbbell appearance of extradural and intradural nodules, while the histopathology confirmed mature cystic Teratoma.

A 7 months old child was a product of full 38 weeks of gestation and cesarian section (CS) delivery. Clinically the child was active, with expected growth milestones, moving all limbs, no neuromotor deficits. He had two dimples on his back, at S1/2 and another at the S4 area, with no other abnormality noticed. The patient had a history of left inguinal abscess at the age of 2 months, which was treated with drainage and IV antibiotics (Augmentin). At the age of 4 months, he presented with fever and decreased activity and was diagnosed with Klebsiella aerogenes meningitis sensitive to gentamicin and Meropenem, for which he was treated with 21 days IV Meropenem. The immunology workup was unremarkable and was declared immunocompetent. After two days of discharge, he was readmitted to Hospital, and CSF cultures grew Klebsiella aerogenes. The pediatric infection team continued him on IV Meropenem for six weeks and Amikacin as synergistic for two weeks. Repeat CSF after two weeks turned negative.  However, while on IV antibiotics at the 4th week, he had a fever spike, and repeat CSF regrew the same organism.  MRI head, dorsal, and Lumbosacral spine was done. MRI head showed meningeal thickening and enhancement, and MRI spine showed thickening and enhancement of cauda equina nerve roots. Further targeted 3D T2 series MRI (3D-T2-Space) with multiplanar reformats displayed to advantage a subcutaneous dermal sinus tract connecting the cutaneous dimple to a rounded extradural lesion which was connected by a tubular tract which continued into the intradural compartment coursing cranially to end in a similar-appearing intradural rounded lesion giving an intraspinal dumbbell appearance (Figure 1 and 2).

Inview of the recurrent infections, MRI evidence of spinal dysraphism with intraspinal extra- and intra-dural lesion, and after discussion with the parents, it was decided to excise the dermal sinus tract, which was believed to be the culprit of repeated meningitis. Other than two dimples at the S1/2 and S4 regions, no obvious deformity was noted on the back. Intraoperatively, elliptical skin incision was made at S1/2 region, the dermal sinus tract was identified, which had a small (about 8mm) extradural mass, the sinus tract was further followed which eventually became intradural at the S1 level, the sinus tract was identified running cranially to end at the filum terminale-CONUS junction as a second small (about 8mm) intradural nodule, Thus given a Dumbell shaped appearance.The sinus tract was carefully dissected from surrounding Nerve roots, blood vessels, and Filum terminale to be removed as single piece under continuous neuromonitoring. In total, it was about 8cm, and under a microscope, a few patchy hairs were noticed along the length of the dermal track (Figure 3). Samples were taken for pathology that showed skin excision with underlying fibro adipose tissue. There is a sinus tract that keeps dilation and forms a cyst (Figure 3A). The tract and the cyst are lined by keratinized stratified squamous epithelium with numerous keratin flakes in the lumen. The cyst wall has skin adnexal structures including sebaceous glands, hair follicles (Figure 3B), and eccrine and apocrine sweat glands. Focally there is mature glial brain tissue adherent to the skin (Figure 3c). Post-operatively the child had an uneventful smooth recovery. A follow-up MRI showed total resection of the sinus tract and intraspinal lesion and resolution of the previously seen meningeal enhancement and was eventually discharged after completion of his antibiotic course. 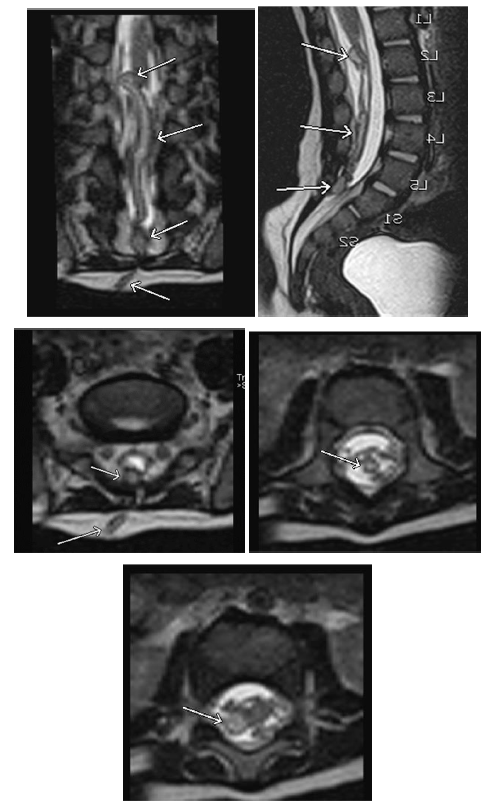 Figure 1: MRI of the lumbosacral spine, 3 D T2 weighted sequence 1 mm thickness (SPACE), coronal and sagittal reconstruction images (a), and (b) respectively showing the full display of the different components of the abnormality, from inferior to superior a subcutaneous sinus tract coursing to a 5 mm extradural nodular lesion at sacral S1-2 level, continuous with an intradural sinus tract, ending in an intradural 5 mm nodular lesion at L1-2 level (arrows from inferior to superior in a, and b). Axial sections at different levels, (b) at sacral S1-2, (c) at mid-lumbar, and (d) at lumbar L1-2 levels, showing the subcutaneous sinus tract coursing to the extradural nodular lesion with bright signal intensity center and low signal intensity rim (long and short arrows respectively in a), cross-section of the intradural tract surrounded by cauda equina nerve roots (arrow in c), and the upper intradural nodular lesion (arrow in d). 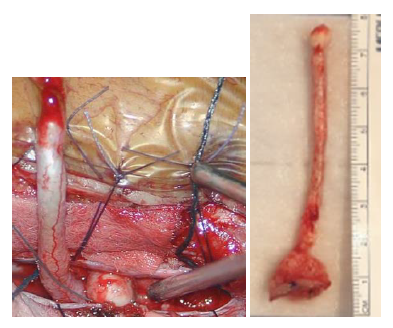 Figure 2: Intra-operative photograph (a) showing the dermal sinus tract and the second nodule seen intradural. (b) Total excision of the tract along with the nodules. 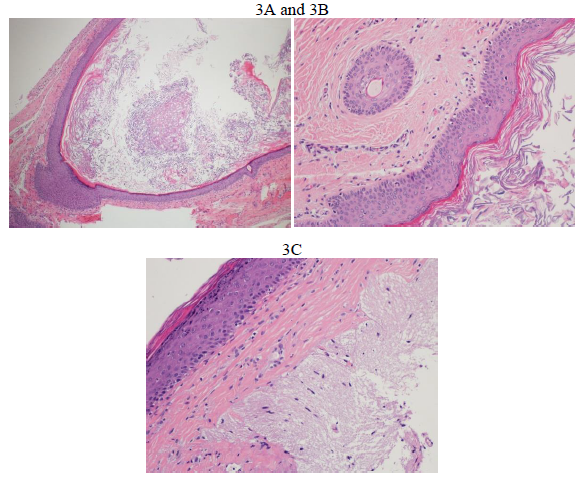 The spine's spinal tumors can be broadly classified into two categories extradural or intradural, with the intradural tumors further subdivided into intra- or extramedullary tumors. About 55 % of all primary spinal tumors are intra-dural extramedullary [2], with the two most common tumors of the spine being the nerve sheath tumors (neurofibromas and schwannomas) and spinal meningiomas [3]. Spinal teratomas are rare tumors encountered more commonly in children, usually associated with spinal dysraphism and a rare entity in adults where it can present as intramedullary tumor [4]. The first case of intraspinal Teratoma was reported in 1863 by Virchow [5]. Teratomas are embryonal tumors that normally arise from germ cells. They are defined as being composed either of tissues that are foreign to the area in which they form, or of tissues that derive from all three of the germ layers. Malignant teratomas are known as teratocarcinomas; these cancerous growths have played a pivotal role in the discovery of stem cells. “Teratoma” is Greek for “monstrous tumor”; these tumors were so named because they sometimes contain hair, teeth, bone, neurons, and even eyes.

A literature review described a broad spectrum of the association, including diastematomyelia, myelomen-ingocele, spina bifida, partial sacral agenesis, and hemivertebrae to Spinal Teratomas [6]. On the other hand, some cases have been described with preceding history of trauma or prior procedure like lumbar punctures [7]. There are two proposed theories for intraspinal teratomas, the germ cell theory that postulates that these tumors arise from germ cells that migrate during embryogenesis, the other theory postulates that these tumors arise from the misfolding of germ cells in the lateral mesoderm causing entrapment in various parts of the nervous system during secondary neurulation (non-dis-junction) [8]. Other than that, there have been case reports in the literature indicating that preceding history of trauma and intragenic intervention have also been implicated [9]. After the repair of myelomeningocele in patients, it has also been reported due to some dermal and epidermal tissue remains after the closure or after spinal epidural injection [10]. Most of the closed Dermal Sinus tracks present with  midline cutaneous dimple overlying the spine and are associated with other cutaneous abnormalities, such as hemangiomas or tuft of hairs, discolouration [1]. The orifice of the sinus may be so small that it escapes detection except on close inspection. Hair may be seen protruding from the opening. The sinus tract begins at the skin dimple and tracks cephalad through the soft tissues to traverse the dorsal dura. Our Patient except for 2 Dimple didn’t have any associated abnormality. Most of dermal sinuses clinically manifest within the 1st decade, usually before the age of 5, because of their tendency to become infected [11]. Authors have recommended inspection of the midline skin carefully in a child sufferings repeated episodes of unexplained meningitis [12].

The first case report of intraspinal cystic Teratoma revealed by recurrent episodes of chemical meningitis was in 1980 by Albert Larbrissea et al. [13]. Extensive Review of Literature by Tebruegge M et al., on epidemiology and pathogenesis of recurrent bacterial meningitis, described 24 cases of recurrent bacterial meningitis associated with dermoid and epidermoid cysts, with the most case having an abnormal connection to the CSF space in the form of a dermal sinus tract which was the causation for meningitis in early months of Life [14]. In his single center-based case series over 15 years, Sharma et al. reported 10 cases of spinal Teratoma, with age ranging from 10 months to 51 years (mean 23.5 years) with male predominance, and most common clinical presentation was the weakness of lower limbs, backache and urinary bladder symptoms [15]. Our patient presented with history of recurrent bacterial meningitis- with no focal neurological deficit or neurological manifestations - despite prolonged antibiotic coverage, Sharma et al, also stressed the importance of total surgical resection as the treatment of choice. They had one case of recurrence after nine years of operation. Total lesion biopsy should be done ,not only a sample biopsy; as many isolated tumors shows mixed histopathological patterns with immature cells, whole mass rather than just small biopsy specimens should be done  as many isolated tumors shows mixed histopathological patterns with immature cells.

Even though Spinal Teratoma can present in various ways, ranging from recurrent meningitis to paralysis and spinal compression symptoms, a lower threshold for Complete Spinal imaging should be maintained in recurrent infection, especially in the early age of Life immunocompetent patients. Although a rare entity, Mature cystic Teratoma should be included as the Differential diagnosis alongwith Dermoid and Epidermoid, especially when it presents the Dermal sinus tract. Complete surgical excision is the mainstay of treatment and to avoid further recurrent infections.