Non-alcoholic fatty liver disease (NAFLD), one of the most common liver diseases, is caused by the disruption of hepatic lipid homeostasis by various metabolic disorders. The progression of NAFLD into Non-alcoholic steatohepatitis (NASH) is mediated by inflammatory chemokines, cytokines, mitochondrial dysfunction, and oxidative stress resulting in hepatocyte inflammation, ballooning, apoptosis, and activation of hepatic stellate cells (HSC). NASH can further lead to cirrhosis, hepatic carcinoma, and also it is predicted to be a major cause of liver transplantation over the next 10 years. Chemokine receptors are majorly involved in recruiting the monocytes in the liver where they are converted into pro-inflammatory macrophages, which further activate the hepatic stellate cell (HSCs) to promote their survival while activating collagen production and fibrogenesis. Thus, chemokines and their receptor play a vital role in the pathogenesis of NASH and can be a potential target for the treatment of NASH. Herein, in this study, we have carried out a structure-based design of CCR2 and CCR5 dual antagonists. We performed pharmacophore mapping studies followed by virtual screening of commercial database to obtain novel molecules which can potentially act as CCR2 and CCR5 dual antagonists. We also performed molecular docking studies of newly obtained hits molecules to see their interactions with both CCR2 and CCR5 receptors.

Non-alcoholic steatohepatitis (NASH) is a liver disease in the absence of alcohol. Accumulation of excess fat in the liver is known as fatty liver [1]. Non- alcoholic fatty liver disease (NAFLD) is a common liver diseases which mainly caused by the disruption of hepatic lipid homeostasis. NAFLD is associated with obesity, insulin resistance or type2 diabetes, and other metabolic abnormalities, such as dyslipidemia and hypertension [2]. Cirrhosis, hepatocellular carcinoma, and liver-related mortality are all consequences of NASH, a progressive subtype of NAFLD. Hepatic fibrosis is the only histologic feature of NASH that has been found to be independently linked to long-term overall mortality, liver transplantation, and liver-related deaths [3]. The occurrence of NAFLD and NASH is increasing in western countries due to high dietary fat intake and low physical exercise which leads to insulin resistance [4]. When there is only steatosis in the liver, it is known as a less severe form of Non-alcoholic fatty liver disease (NAFLD) [5]. The progression of NAFLD into Non-alcoholic steatohepatitis (NASH) is mediated by inflammatory cytokines, mitochondrial dysfunction secondary to nutrient excess, and oxidative stress resulting in hepatocyte inflammation, ballooning, apoptosis, and activation of hepatic stellate cells (HSC) [6]. The probability of developing hepatic fibrosis is significantly high in individuals with steatohepatitis (NASH) than in those with simple steatosis. The fibrosis stage is the strongest predictor for cause and disease specific mortality in NASH patients [7].

Currently, the leading cause for liver transplantation includes NASH [8]. Although NASH is largely unrecognized and underdiagnosed, it is believed to affect at least three to five percent of the global population [9]. In its early stages, NASH is frequently thought to be asymptomatic and "silent", but symptoms such as persistent fatigue, malaise, apparent hepatomegaly, and upper-right quadrant abdominal fullness and discomfort have been recorded [10, 11]. Because NASH is usually asymptomatic, there is little published research on how patients feel it. However, emerging evidence suggests that individuals with NASH have a higher symptom burden and a lower health-related quality of life (HRQoL) [12]. Patients who are overweight, obese, have metabolic syndrome, insulin resistance, Type 2 diabetes, high levels of triglycerides or blood cholesterol, are more likely to be at risk for NASH [13, 14].

The approximation says that the global prevalence of NAFLD is as high as one billion [15]. According to a meta-analysis, the global prevalence of NAFLD is 25.24 percent, with the highest prevalence observed in the Middle East (31.78 percent) and South America (30.45 percent), and the lowest in Africa (13.48 percent) [16,17]. A smaller subset of these people may develop non-alcoholic steatohepatitis (NASH), which is one of the most common causes of hepatocellular carcinoma (HCC) in the United States and a reason for liver transplantation [18]. As obesity became more prevalent earlier in life, NAFLD/NASH prevalence began to rise in younger groups. NAFLD is predicted to affect 3–10 percent of youngsters in Western countries [19]. In America, the rate among those aged 18–35 years is at 24%, which has also been underestimated [20].

In India, the prevalence of NAFLD in the general population varies between 9% and 53%. The majority of studies conducted in urban areas have found a higher frequency than those conducted in rural areas. Rural West Bengal was the site of one of the first population-based studies in India, which revealed an obesity prevalence rate of 8.7% in predominantly nonobese populations [21]. After adjusting for sex, body mass index (BMI), diabetes mellitus (DM), and metabolic syndrome, population-based research from coastal south India indicated an overall NAFLD prevalence rate of 49.8%; the urban residence was shown to be linked with a greater risk for NAFLD [22]. The prevalence of NAFLD was found to be greater in urban populations (53.7%) than rural groups in the ongoing community-based Prospective Urban Rural Epidemiology (PURE) cohort research in north India (30.2 percent) [23, 24].

NAFLD is defined as fat accumulation in the hepatocytes when fat import or synthesis surpasses fat export or degradation. In these lipotoxic hepatocytes, a series of events occur, including immune mediator activation and inflammation, matrix remodeling via fibrogenesis and fibrinolysis, angiogenesis, and mobilization of liver progenitor cells [25].

The Pathophysiology of NAFLD is the accumulation of hepatic free fatty acids and triglycerides. The pathogenesis of progression of simple fatty liver to NASH is not fully understood, yet a "two-hit hypothesis" was initially proposed.

"Two hit hypothesis" suggests a "First hit" involves the lipid accumulation in the liver cells, which increases the risk for a "Second hit", which leads to hepatic injury, inflammation, and fibrosis. However, this theory has been criticized for being too simplistic in describing the pathogenesis of NAFLD. As a result, it has been replaced by the 'multiple-parallel hits' model, which appears to be a more exact portrayal of the process of NAFLD development and progression in subjects with genetic predisposition, in which various factors act in parallel and coherent ways [26, 27]. This multiple-hit hypothesis is based on the idea that obesity, insulin resistance, and changes in the intestinal microbiome are caused by genetic and environmental factors linked to dietary habits [28]. Insulin resistance promotes hepatic de novo lipogenesis and adipose tissue lipolysis which resulting into an increased flux of fatty acids to the liver. Insulin resistance will also lead to adipose tissue dysfunction inducing secretion of inflammatory cytokines [29]. 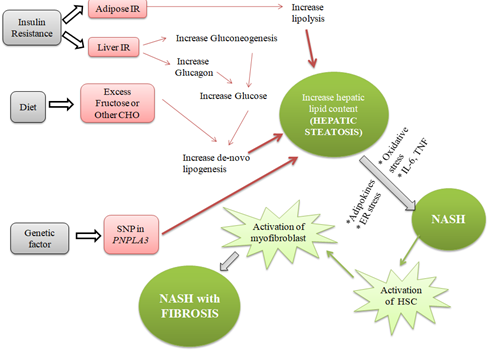 Docking studies were carried out using the Glide Module [32] of Maestro11.2. Prior to undergoing Protein-Ligand docking, protein structures for CCR2 (PDB ID: 5T1A) having resolution2.81 Å and CCR5 (PDB ID: 4MBS) having resolution 2.71 Å, obtained from the RCSB Protein Data Bank (www.rcsb.org) [33] was prepared using the Protein Preparation Wizard (Schrödinger Suite 2016 Protein Preparation Wizard) accessed via Maestro. Ligands including dual antagonist (CVC) and hits from virtual screening were subjected to the LigPrep module of Maestro. For geometry optimization, the OPLS3 force field was used. The grid box was generated at the ligand-binding site by selecting the co-crystallized ligand molecule and extended up to 15 Å as the inner box and 20 Å as the outer box for covering the binding site cavity entirely.

2.2.1 Validation of Docking Protocol: The validation of the docking protocol for both the receptors was done. To perform molecular docking validation protocol, the ligand in native co-crystallized structure BMS-681(in CCR2 receptor) [34] and Maraviroc (in CCR5 receptor) [35], were extracted and re-docked with the active cavity of CCR2 and CCR5 respectively.

Figure 2: Superimposition of native and re-docked conformer (CCR2) having RMSD 1.64Å and (CCR5) having RMSD 2.1 Å.

2.3.2 Validation of hypothesis: Pharmacophore validation was done to determine whether the generated hypothesis is able to identify the actives from the database of ligands. The docked ligand (CVC) was considered as active which was then combined to decoys set having 1000 drug-like compounds (Drug-Like Ligand Decoys Set) [38] retrieved from Schrodinger to form an internal library of 1001 compounds. For validating the screening protocol, the ability of the e- pharmacophore to differentiate the actives from the internal library was evaluated. Enrichment factor (EF) is employed for recovering a fraction of the known actives after a fraction of the database has been screened and it was calculated using the following equation, EF=(a/n)/(A/N), where a is the number of actives retrieved in a sample size of n, A is the total number of actives, and N is the number of ligands in decoy dataset.

The result of pairwise alignment shows that both receptors (CCR2 and CCR5) have the identity of 61.6% and similarity of 70.1%. 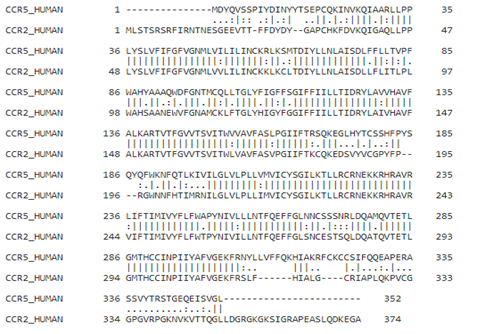 The binding site alignment showed that the most of amino acid residues of CCR2 at orthosteric site are identical with the binding site of the CCR5 receptor which has Maraviroc as a crystallized ligand. The residues which are not identical include the Ser101/Tyr89, His121/Phe109, Arg206/Ile198, PHE116/LEU104, THR287/MET279, and GLY191/SER179 in CCR2/CCR5 respectively.

Docking of dual antagonist Cenicriviroc [39] was done into the active pockets of both the receptors to find the important residues required for antagonism. The precision mode used was XP (Extra precision). 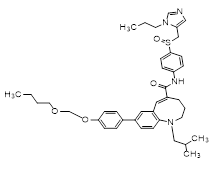 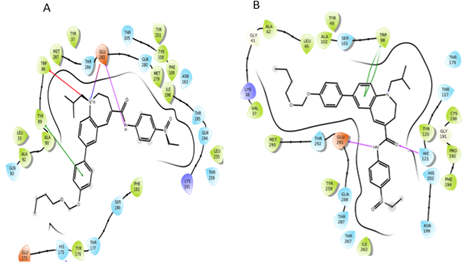 Figure 4: Interactions of CVC with CCR5 receptor and CCR2 receptor.

3.4.1 E- Pharmacophore generation (Structure-based pharmacophore): The E-pharmacophore was generated for both receptors using receptor-ligand complex (CCR2 with CVC and CCR5 with CVC). The seven maximum features were selected to generate with 2Å as the minimum distance between two features. To account for the shape of the active site, a van der Waals scaling of 0.5 was used for receptor-based excluded volumes in each hypothesis.

The NCI database was screened using the generated pharmacophore model (AHRRR) in order to search for potent dual antagonists. Phase Ligand screening module was used to screen the databases requiring a minimum of four feature matches with the hypothesis. The pharmacophore model (AHRRR) was able to screen 59 hits from the NCI database. The screened molecules showing the negative fitness score were rejected and the remaining 50 screened molecules were docked into active pockets of both receptors (CCR2 and CCR5) using glide standard precision (SP) scoring function. Then 20 ligands were selected from them according to their docking scores comparable in both receptors and docked again using glide extra precision (XP) scoring function. Then from XP docking, 5 hits have binding scores comparable to that of reference ligand cenicriviroc in both receptors (glide score -8.064 (in CCR5) and -10.736 (in CCR2) using glide XP scoring function) were selected for detailed evaluation. 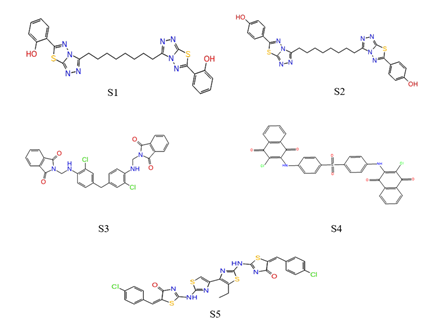 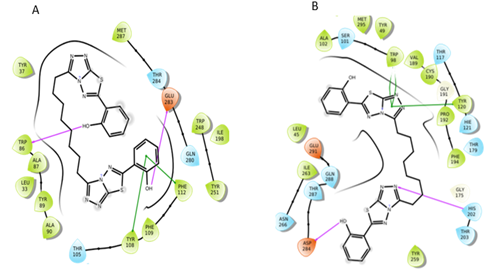 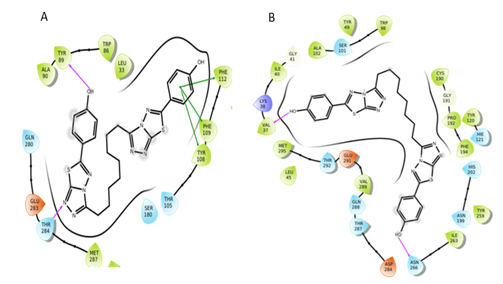 We thank the National Institute of Pharmaceutical Education and Research (NIPER) SAS Nagar, Department of Pharmaceuticals, Ministry of Chemicals and Fertilizers, New Delhi, Government of India for providing the provision to work. We also thank CSIR, DST and DBT, New Delhi for the financial support offered to establish the infrastructure of the Department.

All authors declare no competing interests.