Epidural anaesthesia commonly used for inducing anaesthesia and postoperative analgesia in patients undergoing lower limb surgeries. Fentanyl as an adjuvant to epidural local anesthetic has been for long time. Clonidine is a potent and selective α-2-adrenoceptor agonist with analgesic potency. The aim of the study was to compare the effect of clonidine and fentanyl as an adjuvant to epidural levobupivacaine in total knee replacement surgery.

Seventy patients American Society of Anaesthesiologists Grade I or II who were undergoing total knee replacement surgery were randomly divided into two groups. Patients were allocated to one of the two groups by computer generated random selection. Group I (n=35) patients received postoperative continuous epidural infusion of levobupivacaine (1.25mg/ml) with fentanyl (2 μg/ml) whereas Group II (n=35) patients received epidural infusion of Levobupivacaine (1.25mg/ml) with Clonidine (1μg/ml) in the range of 3-7 ml/hr. Pain intensity at rest and during motion (flexion of the knee, about 30 degree) was assessed using the VAS score.

The total number of bolus doses required in the 24 hours period was 17 doses in group I and 19 doses in group II. The difference in bolus requirement and the mean VAS score at various time intervals (0, 0.5, 1,2, 4, 8, 16, and 24 hours) in two groups was statistically insignificant.

Clonidine even in lower concentration (1mcg/ml) added as adjuvant to levobupivacaine is as effective as fentanyl (2mcg/ml), without any significant alteration in hemodynamic and side effects.

Total Knee Replacement surgery is associated with moderate to severe pain post operatively. Most of these patients are elderly with significant comorbidities, and inadequate pain relief can cause significant morbidity [1]. Epidural anaesthesia remains the standard of care in many of the centres in our country. The advantages include early mobilisation and a reduced risk of deep vein thrombosis and decreased postoperative pulmonary complication [2]. Various adjuvants like epinephrine, fentanyl, morphine, neostigmine, midazolam, clonidine etc have been used to reduce the dose of local anesthetic agents. However, the use of adjuvants brings their own side effects, hence search for an adjuvant continues which would have best potentiating power; while having reasonable side effect profile. In our prospective, randomised, double blind trial, we aimed to find clonidine, used as an adjuvant with levo- bupivacaine 0.125% has better analgesic efficacy and side effect profile when compared to fentanyl, in total knee replacement surgeries for post-operative analgesia.

After Institutional Ethics Committee approval and written informed consent, 70 American Society of Anaesthesiology physical status I-II patients between the age group 20 to 65, undergoing total knee replacement surgery were enrolled in this prospective randomised double blinded study. Patients with history of allergy to any of the study drugs, contraindications to neuraxial anaesthesia, cardiovascular disease (NYHA Grade III and IV), psychiatric illness or mental retardation, renal or hepatic impairment were excluded. Patients were randomly allocated to one of the two groups by computer generated random selection. Group I(n=35) patients received postoperative continuous epidural infusion of levobupivacaine (1.25mg/ml) plus fentanyl (2 μg/ml) whereas Group II (n=35) patients received epidural infusion of Levobupivacaine (1.25mg/ml) plus Clonidine (1μg/ml) in the range of 3-7 ml/hr. The patients along with the primary investigator and pain clinic nurse involved in the treatment of the patients were blinded regarding the study group allocation throughout the study period. Preanesthetic evaluation was done and the entire procedure along with Visual Analog Scale (VAS) was explained to the patient one day prior to the surgery [3]. Premedication consisted of oral alprazolam 0.25-0.5 mg night before and on the morning of surgery. Patient was shifted to the operation theatre and routine monitors like noninvasive blood pressure, electrocardiography and pulse oximetry were attached. Baseline noninvasive blood pressure, heart rate, respiratory rate and oxygen saturation on room air were recorded. An 18 Gauge intravenous line was secured and ringer lactate infusion was started. Epidural catheter was threaded after Loss of resistance (LOR) confirmation in sitting position. After confirming the position of the catheter by a negative test dose, the subarachnoid block was given with 25 Gauge Quincke Babcock needle using 2.75 to 3 ml of 0.5% hyperbaric bupivacaine. Urinary catheter was inserted and surgery was allowed to proceed when adequate anaesthesia had been achieved. A thigh tourniquet was used during the surgery and tranexamic acid 0.75 grams infusion was started before the surgical incision. Postoperatively patients were transferred to the post anaesthesia care unit. The epidural solution was prepared by a trained anaesthesia nurse who was not involved in treatment of the patients. The epidural infusion was started when the sensory block had descended to T10. Patients were initially administered a 5 ml epidural bolus of the solution and then epidural infusion was started at 4 ml/hr via an infusion pump. Epidural infusion rate was adjusted within the range of 3-7 ml/hr as per the requirement of the patient. Infusion rate was decreased if the patient developed systolic blood pressure less than 100 mm Hg or heart rate was less than 40 beats/min, or if motor block Grade-2, or sedation Score-2 developed. Patient was administered injection mephentermine 6 mg intravenous route (I.V.) if the systolic blood pressure was less than 90 mm Hg. Injection atropine 0.6 mg I.V. was administered if heart rate was less than 40beats/minute. The epidural infusion continued for 24 hours postoperatively. Study parameters blood pressure, heart rate, pain score, episodes of nausea and vomiting were recorded at study interval of 30 mins, 1hr, 2hr, 4hrs, 8hrs, 16hrs and 24hrs postoperatively. Pain intensity at rest and during motion (flexion of the knee, about 30 degree) was assessed using the VAS score. If VAS score was >3 at any time in the postoperative period epidural infusion was increased by 1-2 ml.hr-1. Levobupivacaine 0.125% 5 ml bolus was used as was used as the rescue analgesic. Inj. Paracetamol 1gm I.V. was given to all patients postoperatively every 6hrs. The above medications were documented by the pain clinic nurse. Pain relief was estimated from the VAS scores and total amount of epidural analgesic solution consumed postoperatively.

Motor Block was assessed at the above time intervals using the Bromage scale (0= Free flexion of knees and feet, 1= Just able to flex knees with free movement of feet, 2= Unable to move knees with some flexion of feet, 3= Unable to move legs and feet [4]. Nausea and vomiting score was used to assess the same during visits at above mentioned interval (0=no nausea/vomiting in past time interval, 1= nausea in past time interval, 2= retching/vomiting in past time interval). Postoperative nausea lasting for more than 10 minutes or vomiting were treated additionally as required with injection metoclopramide 10 mg intravenous. The use of antiemetics was documented by the pain clinic nurse on duty and was noted on subsequent visits at above mentioned intervals. Pruritus was treated with injection naloxone 0.1 mg intravenous.

The statistical analysis of the data was carried out using Statistical Package for Social Sciences (SPSS Inc., Chicago, IL, version 17.0 for Windows). All quantitative variables were estimated using mean, and standard deviation; Scores or skewed data were presented as median or IQR. Normality of data was checked by measures Kolmogorov Smirnov tests of normality. For normally distributed data means of quantitative variables of two groups were compared using student t-test. For skewed data or scores Mann Whitney test was applied.

The difference in MAP and HR between both the groups was statistically insignificant; at these time intervals. The incidence of adverse effect to either drug was reported during the study. 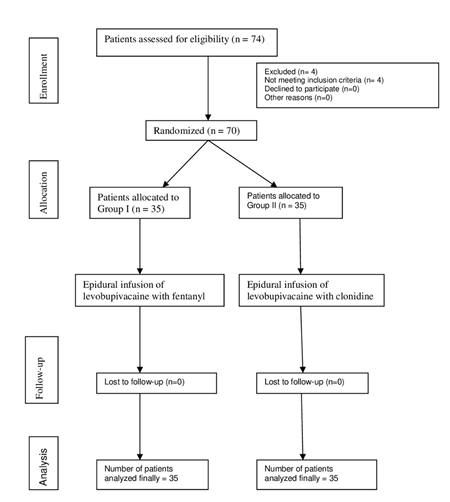 This study shows that epidural clonidine (1μg/ml) or fentanyl (2 μg/ml) when added to epidural levobupivacaine after total knee replacement surgery are similar in terms of analgesia, and incidence of adverse effects. There have been various studies establishing the role of epidural fentanyl at the dose of (2 μg/ml) for various purposes: labour analgesia, radical cystectomy, hip surgery, clonidine (1μg/ml) an alpha 2 agonist has also been used as an adjuvant to local anaesthetic in epidural, spinal and peripheral nerve blocks. It has been seen to prolong the duration of sensory and motor blockade without an increase in adverse effects. Similar result was found by Mahran EA et al. [5] in his study in patients undergoing radical cystectomy surgery, in terms of comparable efficacy of epidural clonidine and fentanyl. However, they have demonstrated more hypotension and bradycardia in patients receiving epidural clonidine as compared to fentanyl. In another study, A Arumugam et al. [6] also demonstrated good analgesic efficacy of epidural clonidine, but with a slightly higher incidence of hypotension and bradycardia. In both these studies, epidural clonidine has been used in a concentration of 2 mcg/ml. In our study, we did not find any significant hemodynamic changes in both the groups. This may be because; we have used clonidine in a lower concentration of 1 mcg/ml. Despite using low dose of clonidine in epidural infusion, we were able to achieve similar analgesia and VAS score, with no significant hemodynamic changes and no incidence of postoperative nausea/ vomiting or increased sedation in both our study groups. In a prospective double blind randomized controlled study done by Chand T et al. [7] clonidine and fentanyl were compared as an adjuvant to bupivacaine for postoperative lumbar epidural analgesia who underwent vaginal hysterectomy. They concluded that Clonidine is an effective and safe alternative to epidural Fentanyl for postoperative analgesia. In a study done by Karnawat et al. [8] fentanyl and clonidine were compared as an adjuvant to bupivacaine epidurally in patients undergoing total hip replacements. Both the groups were similar in terms of analgesia but fentanyl group had more incidence of nausea, vomiting and pruritus, whereas sedation was common in clonidine group. Kejrival et al. [9] stated that Levobupivacaine with fentanyl provides better anesthesia and hemodynamic stability than levobupivacaine with clonidine in thoracic EA for Laparoscopic Cholecystectomy. In a study by Apostolos et al. [10] fentanyl 2mcg/ml and clonidine1mcg/ml was added to ropivacaine1.5 mg/ml and compared in terms of motor blockade, pain relief and side effects in arthroscopic ACL reconstruction. They concluded that Ropivacaine plus fentanyl 2 mcg/ml administered through PCEA compared with ropivacaine plus clonidine 1mcg/ml guarantee higher quality analgesia. Dexmedetomidine has also been compared with fentanyl epidurally, with better analgesia and less opioid requirements, less incidence of nausea, vomiting, pruritis, urinary retention, and respiratory depression in dexmedetomidine group. In a randomized study by Mahran EA et al. [5], 50 urinary bladder cancer patients of undergoing radical cystectomy surgery, received epidural levobupivacaine with clonidine or fentanyl.  No statistically significant difference was found in sedation scale and VAS scale in both groups. However heart rate and mean blood pressure values were higher in fentanyl group   than clonidine group. The limitations of the study include a small sample size and a single centric study. Also, we did not compare epidural with more recent peripheral nerve blocks like adductor canal or femoral nerve block. We concluded that the randomized controlled trial establishes both clonidine and fentanyl as effective additives to epidural levobupivacaine for postoperative analgesia after total knee replacement surgery with no significant difference between them in analgesic efficacy and safety profile.

Conflict of interest for each author

No funding was received

Taken from the patient.