This study aimed to develop a combined of two observational methods, as video recorded and connected weighing scale in order to describe a mealtime episode in mother-infant pair during complementary feeding. Thirty (30) pairs of mother-child aged 11-23 months-old were randomly selected and enrolled in one of the village of Southern-Benin. The mixed of two observational methods showed a high positive correlation in data for describe the meal’s episode of mother-infant pair. The results revealed the existence of different mother-infant pair functioning and highly variability in the eating behaviour. The amount of porridge consumed varied of 150 to 400 g, respectively 150 g for pair 1,250 g for pair 2 and 400 g for pair 3 from connected weighing scale. The spoon content recorded were higher in pair 3. The total duration of food consumption were 10 min, 7 min 5 s and 8 min 2 s respectively for pair 1, 2 and 3. The time of the first refusal to consume from video recording were appeared respectively in first for the pair 1 at 2 min 28 s, in middle for the pair 2 at 3 min 16 s and totally in end for the pair 3 at 7 min 45 s during a meal consumption. Intra pair variability, the eating style of pair 2 was adequate models for optimal growth status in complementary feeding. The conditions of the use of combined observational methods might be improved in order to perform the description of mother-infant pair functioning during in mealtime episodes.

Crops that were less affected by extreme weather like cereals (such as wheat, barley, millet, and sorghum) and tubers (such as yams) slowly became popular throughout Africa and have remained important staples in the African diet today [1]. These foods contain high carbohydrate level. That is the case of Ivorians whom diets are carbohydrate based and most families plan their meals around it. Foods high in carbohydrates are an important part of a healthy diet. Carbohydrates provide the body with glucose, which is converted to energy used to support bodily functions and physical activity. Carbohydrates are the main energy source in most human diets, making up about 40-80% of our calorie intake play an enormous role in human physiology [2]. Despite the energy value of carbohydrates, their physiological effects on human health differ from each other [2]. Carbohydrate quality is important; some types of carbohydrate-rich foods are better than others. Indeed, the energy contents and digestibility of different carbohydrates differ. According to [3], the healthiest sources of carbohydrates are unprocessed or minimally processed whole grains, vegetables, fruits and beans. They promote good health by delivering vitamins, minerals, fiber, and a host of important phytonutrients. Unhealthier sources of carbohydrates include white bread, pastries, sodas, and other highly processed or refined foods. These items contain easily digested carbohydrates that may contribute to weight gain, interfere with weight loss, and promote diabetes and heart disease. These carbohydrate foods elicit a quicker response from insulin than others [4]. An excessive consumption of these foods will cause hyperglycemia, which in the long term will lead to diabetes [5] and other metabolic diseases.

A consumption survey was conducted from 26 August to 26 September 2019 in five municipalities (Cocody, Port-Bouet, Marcory, Abobo and Yopougon) in Abidjan (Côte d’Ivoire). These five municipalities were chosen taking into account their cosmopolitan character, their high population density and their social and food diversity. Sample consisted of men and women randomly selected. In each town, the interviews were conducted individually in French with 50 participants (young, adults and senior). The questions were about the food habits and the frequency of consuming these foods.

National foods (white rice cooked and attieke) and non-national foods (gari and akassa) were purchased in the big market of Abobo, Abidjan (Côte d’Ivoire). This market is one of the most populated areas where we find all kind of traffic, traders from several African countries. Attieke is a fermented cassava couscous. Gari is cassava root, dried and ground into a flour. Akassa is maize-based fermented dough. The samples (attieke, gari and akassa) were purchased from randomly selected four sellers. They were packaged in closed containers for analysis. The rice was cooked at home (1 kg of rice for 1.5 l of water).

Moisture, ash, proteins, lipids and total fiber, were determined by AOAC method [9]. The amount of carbohydrates was determined by difference as follows:

The energy value was determined by [10] formula using [11] coefficients.

The portion of food consumed on the base of 50 g of available carbohydrate were determined according to the following formula:

Consumption survey data were collected and analyzed with IBM SPSS software version 22 for windows where data were subjected to descriptive statistics for calculation of frequencies. Results of biochemical characterization are presented as the average ± standard deviation, and the differences among foods were assessed by one-way analysis of variance followed by Duncan’s New Multiple Range Test using Statistica 7.1 (StatSoft).

3.1 Characteristics of the respondents

3.2 Food habits of the respondents

Table 1: General characteristics of the respondents. 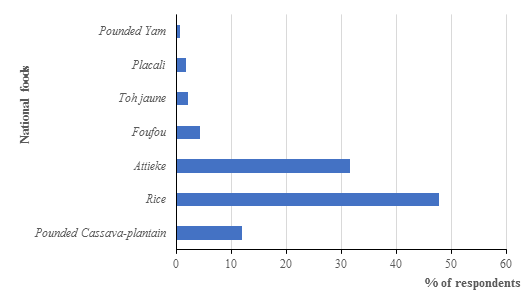 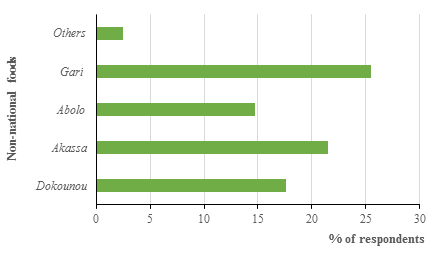 Table 3: Proximate composition of the test foods (% of dry matter).

The consumer survey focused on a population with more men than women. The majority of people were young people between the ages of 19 and 30. These people were mostly “Akan”. According to [12], the “Akan” are the most numerous in the Ivorian population. Rice and attieke are the national carbohydrate foods that these people consume the most. These results could be explained by the fact that rice and attieke are staple foods of the Ivorians. These foods are generally eaten for lunch and dinner in most households. Gari and akassa are the most consumed non-national carbohydrate foods. However, it is rarely consumed. But often once or twice a month. Akassa is also consumed among others in Benin, Togo, Nigeria, a little in Mali. It is of Beninese origin where it is consumed four times a week. It is a dish very appreciated by Africans [13].

The water contained in akassa is greater than that of cooked rice which is itself greater than that of attieke and gari. These results could be explained by the culinary techniques applied to these foods. Indeed, these techniques can either increase or decrease the water contained in foods. Preparation of akassa and rice requires the incorporation of water. That increase the water level in these foods. Both the attieke and the gari, which are made from cassava, certainly contain water, but high proportion of the water was removed from the attieke during pressing. As for gari, the step of pressing and roasting over high heat is believed to be the cause of this low water content. The amount of water contained in akassa (86.55%) is similar to that found by [14]. According to his studies, akassa is made up of 86.90% water.

Rice, attieke, gari and akassa are rich in carbohydrate (87.30 to 97.45%) and poor in lipids, proteins, fibers and ashes. These foods are made from tubers (attieke and gari) and cereals (rice and akassa). Indeed, attieke and gari are prepared from the cassava tuber which is rich in starched and poor in lipids, proteins and ash [15]. Thus, the derived dishes will have a very high carbohydrate content. Akassa is a preparation made from corn. According to [16], corn is a food low in lipids, ash and protein but high in carbohydrates. The preparation of akassa goes through various processes such as cleaning, soaking and sieving operations, which further reduce the content of these nutrients [14]. Some nutrients are solubilized by the water used in the process [14]. Losses of soluble protein increase with prolonged soaking. Indeed, [17] reported that prolonged soaking can result in loss.

The low nutrient content of rice could be explained by the mechanical treatments allowing to obtain the white rice and which lead to losses of lipids, proteins, dietary fibers, vitamins of the group B and vitamin E as well as the loss of main minerals such as magnesium, potassium or manganese particularly abundant in the germ, pericarp and aleurone layer [18]. Consumed alone, these dishes could cause nutritional imbalance and an increase of the glycemia because of their low fiber content (0 to 9.17%). For these reasons, [19] undertook work to fortify attieke with yeasts capable of increasing protein contents by up to 10.5% without significantly affecting organoleptic qualities.

For 50 g available carbohydrate, the amount of akassa to ingest was the highest (425.83 g) following by that of rice (180.31 g), attieke (131.05 g) and gari (61.08 g). These portions mostly contained water, low protein, lipid and fiber levels. The glycemic responses of these foods could be very high. Indeed, according to [20], there is a close relationship between foods in which more than 80% of the energy intake comes from their carbohydrates and the considerable rise in postprandial blood sugar. Also, rice, attieke, gari and akassa contain starch, more precisely amylopectin, which are easy to digest [21]. Indeed, attieke contains 83% amylopectins, gari 75%, rice 75% and akassa 78.5 to 80% [22]. Thus, regular consumption and high amount of these foods may cause short-term, significant peaks and hyper-glycemic long-term deterioration of glucose homeostasis.

No conflicts of interest have been registered on this work to the best of our knowledge.