Chemical composition and uses of Honey: A Review

Honey is an organic natural substance that is produced from the nectar of flowers by Apis mellifera and is a sweet, flavorful liquid. It is one of the most popular natural sweet substances. From a chemical point of view, it could be defined as a natural food mainly composed of sugars and water together with minor constituent such as minerals, vitamins, amino acids, organic acids, flavonoids and other phenolic compounds and aromatic substances. Its composition is particularly variable, depending on its botanical and geographical origins. Honey is used to feed bees during the winter. For centuries, honey has been used as food and as natural medicine, being prescribed by physicians of many ancient cultures for the treatment of a wide variety of ailments.

Honey is a natural substance produced by honeybees (Apis mellifera) from the nectar of flowers which is a sweet, flavorful, viscose liquid [1]. It has been used as a food and medical product since the earliest times.  Honey is a complex mixture and presents very great variations in composition and characteristics due to its geographical and botanical origin, its main features depending on the floral origin or the nectar foraged by bees [2]. The composition and quality of honey also depend on several environmental factors during production such as weather and humidity inside the hive, nectar conditions and treatment of honey during extraction and storage. The composition of honey varies with the feeding of the bees. Honey has been reported to contain more than 180 substances and is considered as an important part of traditional medicine. Honey has numerous uses and functional applications worldwide such as in food systems, religious and magical ceremonies as well as in human and veterinary medicine [3]. It is a very important energy food and is used as an ingredient in hundreds of manufactured foods, mainly in cereal-based products, for its sweetness, color, flavor, caramelization, pumpability and viscosity [4].

The composition of honey basically varies to the floral source, but seasonal, environmental factors and processing conditions are also important.

Sugar in honey is not a single species, but consists of three kinds of sugar. These are the fruit sugar (fructose), which has among the highest (41%), grape sugar (glucose), which has about 34% of ordinary sugar (sucrose) which is between 1 and 2% [5]. The ratio of one type of sugar to other depends of the source, i.e., flower pasture, and to some extent on enzyme invertase, which breaks down regular sugar in grape and fruit. This enzyme is located in the flower from which the bees collect nectar, but it is also present in the bee’s body [6]. 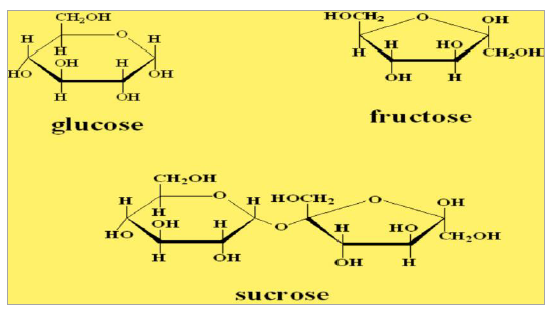 Proteins come in honey from nectar and pollen as a integral parts of plants. Proteins in honey may be in the form of a very complex structure or in the form of simple compounds, i.e., amino acids [7]. The content of amino acids and proteins is relatively small, at the most 0.7 %. Honey contains almost all physiologically important amino acids. The main amino acid is proline is a measure of honey ripeness. The proline content of normal honeys should be more than 200 mg/kg. Values below 180 mg/kg mean that the honey is probably adulterated by sugar addition [8].

Honey volatiles are the substances responsible for the honey aroma. Research on honey volatiles started in the early 1960s. Recently, by studying volatiles isolated from honey [9], it was found that most volatile compounds originate probably from the plant, but some of them are added by bees.  Until the present time about 600 compounds have been characterized in different honeys. Phenolic acids and polyphenols are plant-derived secondary metabolites. These compounds have been used as chemotaxonomic markers in plant systematics. They have been suggested as possible markers for the determination of botanical origin of honey [10]. Dark colored honeys are reported to contain more phenolic acid derivatives but less flavonoids than light-colored ones [11].

HMF is a six-carbon heterocyclic organic compound containing both aldehyde and alcohol (hydroxymethyl) functional groups [12]. The ring of the structure is centered on furan moieties, whereas the two functional groups, i.e., formyl and hydroxy-methyl groups, are linked at the second and fifth positions, respectively (Figure 3). HMF is a solid, yellow substance that has a low melting point but is highly soluble in water [13]. 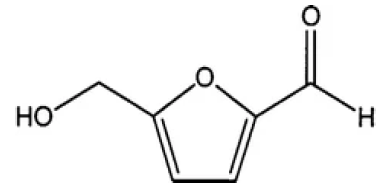 HMF is a breakdown product of fructose (one of the main sugars in honey) that is formed slowly and naturally during the storage of honey, and much more quickly when honey is heated. The amount of HMF present in honey is the reference used as a guide to the amount of heating that has taken place: the higher the HMF value, the lower the quality of the honey is considered to be [15]. Some countries set an HMF limit for imported honey (sometimes 40 milligrams per kilogram), and honey with an HMF value higher than this limit will not be accepted [16].

Honey contains varying amounts of mineral substances. The main element found in honey is potassium, besides many other elements (as shown in table 1). Potassium, with an average of about one third of the total, is the main mineral element, but there is a wide variety of trace elements Several investigations have shown that the trace element content of honey depends mainly on the botanical origin of honey. Minerals has about 3.68% [17]. Although this part of the honey does not make a large amount, minerals in honey raise the value of honey for human consumption. Honey contains most of the minerals: potassium, chlorine, sulfur, calcium, sodium, phosphorus, magnesium, silicon, iron, manganese and copper [18]. When the observed mean value, dark types of honey are richer in minerals than lighter. Of course, singles can find a darker species that are poorer than some lighter species [19].

Table 1: Minerals  in honey in relation to human requirements

Acids are also components of honey. Before it was believed that bees by stomach inserted bee venom into the cell honeycomb with honey and make it so conserved. Given that one of the main components of bee venom is formic acid, it was thought that the honey has a formic acid [20].  Even some people urged to other not to use honey because of that. Studies have shown that they are completely different acids that are composed in honey, mostly apple and lemon acid. Honey is a buffer, that means that that its pH does not change by the addition of small quantities of acids and bases. The buffer capacity is due to the content of phosphates, carbonates and other mineral salts [21].

The water content of honey (water-in-honey) is the quality aspect that determines the ability of honey to remain fresh and to avoid spoilage by yeast fermentation.  Raw honey can have a water-in-honey content of less than 14% and the lower the water content the higher the perceived value of the honey [22].  It is internationally recognized that good quality honey should be processed at less than 20% water content.  Low water content is desirable because honey may begin to ferment and lose its fresh quality if the water-in-honey is greater than 20%.  Unpasteurized honey ferments because it contains wild yeast.  However, due to honey's high sugar concentration these yeasts are less likely to cause fermentation in honey with low water content [23].

Bees produce honey to act as a food store for the colony for periods when there are no flowers, or the climate is adverse. For example, during the winters of northern, temperate countries, few plants are flowering between October and March, and bee colonies need honey stores to survive throughout this flowering dearth period, and when it may be too cold to leave the nest [24]. In tropical countries, bees need to survive through seasons when there are no flowers, periods of drought, or when bees are not able to forage because of rain or other adverse weather.

Honey is a useful source of high-carbohydrate food, and usually contains a rich diversity of minor constituents (minerals, proteins, vitamins and others), adding nutritional variety to human diets [25].

3.3.1 Antibacterial activity: Honey has proven antimicrobial activity [26]. Honey inhibits a broad spectrum of bacterial species [27]. The alcohol extracts of honey exhibit an inhibitory effect to array of bacterial species including aerobes and anaerobes, Gram positives, and Gram negatives. Honey has powerful antimicrobial effects against pathogenic and non-pathogenic micro-organisms (yeasts and fungi), even against those that developed resistance to many antibiotics. The antimicrobial effects could be bacteriostatic or bactericidal depending on the concentration that is used [28].

3.3.2 The antioxidant property of honey: Honey is being used since long time both in medical and domestic needs, but only recently its antioxidant property has come to limelight [29]. With increasing demand for antioxidant supply in the food, honey is becoming popular as a source of antioxidant. Oxidative stress results from lack of balancing chemical reaction between the production of free radicals and the natural protective effect of our body resulting into cellular damage and disruption of genetic structure the main antioxidants in honey are the phenols, such as quercetin, hesperetin and chyrsin, and the Maillard products called melanoidins. The phenol quercetin directly binds to and strongly inhibits cellular transcription factors’ activities [30]. The inhibition of the transcription factors surpasses the phosphorylation and activation process which avoids cellular effect of the free radicals. It, also, induces apoptosis (programmed cell death) of human osteosarcoma cells and reduces protein expression levels in human fibrosarcoma cells [31].

3.3.3 Wound healing property of honey: The development of wound infection has deleterious effects on patients by causing increased pain, discomfort and inconvenience and can lead to life-threatening illness or even death [32]. Also, it interrupts the healing process, contributing to extended hospital stays, as well as increased treatment costs in terms of antibiotics, dressings and staff time. Wound healing can be affected by endogenous (pathophysiology) and exogenous (micro-organisms) factors [33]. The risk of wound infection increases as local conditions favor bacterial invasion and growth [34]. Honey is one of naturally existing remedies that has been applied in the treatment of wounds [35]. It promotes faster wound healing through its regenerative tissue growth and epithelization effects, with little or no formation of scars. Furthermore, prostaglandins and nitric oxides play a major role in the healing process. Honey has proven safety for use. External application of honey dressings as well as application to mucous layers of the body cavities didn’t show signs of allergic reaction and side effects [36].

Honey is widely used as a source of sugars for making honey wines and beers, and in the manufacture of many secondary products: breakfast cereals, bakery goods, and a multitude of other value-added products.

Table 2: List of bacterial species sensitive to honey/honey products and diseases they cause [28].

High-quality honey has a variety of positive nutritional and health effects. The quality of honey depends on its floral origin and chemical composition. Honey has been always taken place in diet not only nutritional aspects but also for health properties. The main nutrition- and health-relevant components are the carbohydrates, which make it an excellent energy source, especially for children and sportsmen. Honey is highly special, nutritious, functional and healthy food. Except nutritious value, it inhibits some food spoilage organisms too. As it has high antioxidant activity it is preferred as not only direct consumption but also supportive or preservative in foods. To make use of the miracles of honey, the tricks of honey should be avoided. Quality honey production and consumption should be increased. Adulteration of honey, decreases income of honest producers and it also has negative effects on consumers’ nutrition and health.