Breast cancer in women represents the fifth cause of death in the world and the leading cause of cancer death in Colombia. Cutaneous metastases of this cancer are frequent, 23.9% of the cases, and 3% of them present as a carcinoma in cuirasse with papules and nodules, initially dispersed, which are later grouped into scleroderma-like lesions; Keloid-like lesions are rare. We present the case of a 56-year-old woman with a breast metastasis of a mammary carcinoma with pruritic lesions similar to keloids, from which a hidden breast cancer was diagnosed. In skin histopathology, a fibrotic stroma was found with atypical cells that infiltrated collagen bundles in an "Indian row" pattern, positive for estrogen and progestogen hormone receptors. The patient presented a clinical improvement of skin lesions and symptoms after chemotherapy. The clinical diversity of skin metastases and the importance of suspecting breast cancer from keloid lesions in the anterior thorax are highlighted.

Excluding non-melanoma skin cancer, breast cancer is the most commonly diagnosed cancer in women in Colombia, about 13,380 cases were diagnosed in 2018, corresponding to 24.8% of carcinoma cases. In the world, 2.1 million new cases of breast cancer were estimated in 2018. Female breast cancer ranks fifth among the leading causes of death worldwide (627,000 deaths, 6.6%) because the prognosis it is relatively favorable, at least in the more developed countries, however, in Colombia it is the leading cause of cancer death in women (15%), followed by lung cancer (13.8%) and colorectal cancer (9.5 %), which are also the third and second most common type of cancer in women, respectively. (http://gco.iarc.fr/today/data/factsheets/populations/170-colombia-fact-sheets.pdf)

Cutaneous metastases result from infiltration of the skin by proliferation of cells from malignant tumors located at a distance [1] Metastases to the skin may be the first sign of an internal neoplasm in up to 3.5% of cases, in these cases they are considered to be of poor prognosis and the diagnosis of primary carcinoma is usually difficult to perform. The overall incidence of cutaneous metastases in patients with cancer is 5.3% (ranging from 0.6 to 10.4%), it increases in patients with breast cancer up to 23.9% [2, 3] Breast cancer is the second cause of cutaneous metastases after melanoma [4].

Next, we report the case of a patient with a carcinoma in cuirasse that manifested as keloid-like lesions and was the cause for which the patient consulted with dermatology.

2. Synopsis of the Case

56-year-old woman, a native of the city of Medellín, Colombia. The patient went to the dermatological consultation for a clinical picture of 1.5 years of evolution of painful erythematous lesions such as scars on the right breast that progressed to affect much of the anterior and superior thorax, had not received any treatment. When the patient was interrogated for the presence of nodules or masses in the breasts, the patient reported the presence of an asymptomatic nodule in the right breast for 3 years, which she had not consulted because she did not consider it important. She had a pathological history of hypertension in treatment with hydrochlorothiazide 25 mg/day and diabetes mellitus in treatment with Metformin 1700 mg/day. Gynecobstrict history: menarche at 13 years, menopause at 51 years, one pregnancy, one vaginal delivery and a one live child. She had no surgical or allergic history. Family history of family hypertension, no history of oncological diseases in her family. During the physical examination, the presence of numerous pink and violet coalescent plaques was evident. They were bright, with a smooth surface and a keloid cicatricial appearance, sclerodermatous and painful on palpation, which made it impossible to palpate breast tissue. The lesions affected both breasts, being more infiltrated on the right side (Figure 1).

With the diagnostic impressions of a cutaneous metastasis of a breast cancer or spontaneous keloids or keloid nodular morphea, a skin biopsy was taken with a punch, the presence of a malignant neoplasm of epithelial lineage was found in the histopathological analysis, cells with a clear and scarce cytoplasm, pleomorphic and hyperchromatic nuclei and atypical mitosis, an infiltration of the collagen bundles by neoplastic cells was observed, in an "Indian row" pattern. Immunohistochemistry was positive for estrogen and progestogen hormone receptors. (Figure 2) The clinical correlation of infiltrated hard plaque type lesions such as extensive keloid scars that affected the anterior trunk and gave the appearance of a rigid armor and the aforementioned histopathological findings corresponded to the diagnosis of cutaneous metastasis of breast cancer type carcinoma en curaisse.

Mammography could not be performed due to the great induration of the breast tissue. Evaluation with bone gammagraphy showed a polyostotic metastatic compromise (Figure 3). No thoracoabdominal metastases were found by tomographic studies. 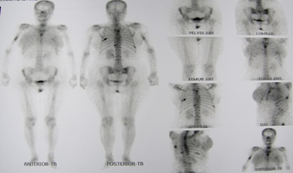 The case was classified in a stage of severity T4 N2 M1, received treatment with chemotherapy: 5-Fluouracil, doxorubicin and cyclophosphamide, with improvement of the infiltration of the lesions, decrease of the local discomforts and increase of the perception of well-being (Figure 4). The patient died of breast cancer after five years of treatment.

Figure 4: Post treatment control. Significant improvement in skin appearance and quality of life after 3 months of treatment with 5 fluorouracil, doxorubicin and cyclophosphamide.

Cutaneous metastases from breast cancer are located preferentially in the trunk and abdomen in 75% of cases. The remaining 25% is located in the scalp, upper extremities and face, usually after diagnosis, in advanced stages or as a manifestation of recurrence after treatment [4, 5]. In the case of our patient, carcinoma en cuirasse was the first cause of consultation. Seven pattern of cutaneous breast metastasis have been described: 1. Nodular 2. Telangiectatic 3. Of the inframammary fold, 4. Neoplastic alopecia, 5. Inflammatory or erysipeloid, 6. Paget's disease of the areola and nipple, and 7. En cuirasse. 80% of cutaneous metastases from breast cancer are nodular, telangiectatic represents 11.2%, and the other patterns are less frequent [6].

Carcinoma en cuirasse corresponds to 3% of the cutaneous metastases of breast cancer, was described by Velpeau in 1838 as a rigid plate similar to a shield, and Handley in 1922 observed that the skin in this type of carcinoma was similar to that found in the processes of chronic lymphatic obstruction such as elephantiasis, which is why it was called pachydermia [7] Carcinoma en cuirasse has also been described in neoplasms of the lung, gastrointestinal tract, kidney, vulva and penis [5-8].

Breast cancer in men is uncommon; about 1910 new cases are estimated per year, compared with approximately 230,000 new cases in women in the United States. 90% of cases of breast cancer in men are of the invasive ductal subtype and 3% of cases are related to congenital disorders such as Klinefelter syndrome. Lauren et al. described the first case of carcinoma en cuirasse in a man with pleomorphic lobular carcinoma, a rare and very aggressive subtype of breast cancer, with at least 5 cases in men, in the literature reviewed [9]. Carcinoma en cuirasse begins with papules and nodules, dispersed and firm, which are grouped into larger, indurated, sclerodermiform-like plaques. The progressive hardening of the skin in the manner of a leather or en cuirasse, evolves during several years in the absence of a systemic compromise and can be associated with pruritus, pain and ulceration.

Regarding the pathophysiology, it is known that tumor cells reach the skin through 3 routes of dissemination: the hematic, the lymphatic and by contiguity; in carcinoma en cuirasse, malignant cells spread through the lymphatic system and reach the skin of the trunk. The knowledge about the pathophysiology that explains the scleroderma-like changes of the carcinoma en cuirasse is poor, it is believed that pleiotrophin, a cell growth factor, acts as a signaling molecule that promotes the progressive fibrous growth or scirrhous growth in these carcinomas [10].

In the histology of the carcinoma en cuirasse the tissue resembles fibrosis, few tumor cells are observed that exhibit an "indian row" pattern, forming small malignant cell lines between the collagen bundles. Tumor cells are often overlooked, since they closely resemble fibroblasts, although tumor cells have larger, angulated nuclei and more intense basophilia [9]. The histopathological characteristics of the presence of a dense fibrosis matrix and a diminished vascularization, can explain why the tumors resist to a great extent the systemic chemotherapy [11].

Differential diagnoses may present with extensive keloid and/or hypertrophic scarring, multiple-plate morphea, especially nodular and keloid variant; desmoplastic melanoma and scar sarcoidosis [12, 13]. Mullinaz and Cohen described a case of a 63-year-old woman with a history of a mammoplasty, who developed lesions like keloids, for which she received numerous treatments with topical steroids and in infiltration, the lesions were located outside the sites of the previous incisions and had little response to the treatments, which led to the performance of biopsies that allowed the diagnosis of a breast cancer, the authors emphasize that the tumor cells can be overlooked due to their similarity in appearance with the fibroblasts [11]. In our case, the patient did not present a history of surgery in the breasts or previous cicatricial skin pathologies that could be related to a higher risk of abnormal or keloid scarring.

Treatment options for breast cancer in cuirasse are limited, the goal is palliative, they can benefit from local irradiation, skin grafting, and non-steroidal anti-inflammatory therapy. Given the presence of extensive reactive fibrosis and a decrease in vascularization, chemotherapeutic agents may be unable to obtain effective local concentrations, however, in our patient a favorable clinical response was observed with the chemotherapeutic treatment [11].

The authors declare no conflicts of interest