Background: Diagnosing chronic kidney disease (CKD) in clinical practice is quite difficult for patients presenting with uremia for the first time. Carbamylated haemoglobin (CarHb) may provide a better index of chronic uraemic exposure than a single measurement of urea.

Objective: To evaluate the carbamylated haemoglobin as an early biomarker in the diagnosis of CKD.

Accurately determining acute or chronic nature of kidney failure is frequently needed in clinical practice in patients presenting with uremia for the first time. One of the most important steps in acute nephrological emergencies is to identify renal failure either acute kidney injury (AKI) or chronic kidney disease (CKD). AKI is defined as any increase in serum creatinine by ≥0.3 mg/dl within 48 hours (≥ 26.5 μmol/L) [1]. AKI represents a substantial risk factor for CKD [1, 2]. CKD is characterized by a progressive and ongoing loss of kidney function for >3 month duration with or without decrease in glomerular filtration rate (GFR) [3].

Diagnosis of chronic kidney disease (CKD) is quite difficult for patients who present with uremia for the first time and if their kidney functions of previous 3 months are unknown.In the cases where findings are consistent with CKD, it makes the diagnosis easier. However, when the kidney size is normal as in diabetes mellitus, multiple myeloma, polycystic kidney disease, it is quite difficult to differentiate acute kidney injury (AKI) from chronic kidney disease (CKD) [4]. Patient’s history regarding renal impairment, relevant clinical examination and routine biochemical tests along with long-standing hypertension, uremic neuropathy, anemia, hypocalcaemia, hyperphosphatemia and hyperparathyroidism are consistent with CKD but still with low sensitivity and specificity [5].

Loss of kidney function is always associated with increases in blood urea level. Therefore, a new approach has been taken for its measurement that has broadened the scope of its use [6, 7]. Urea and other metabolites are retained in renal failure, which gradually increase day by day. It spontaneously rearranges under physiologic conditions to form ammonia and cyanate [7]. The protonated form of cyanate, isocyanic acid reacts with the amino groups of proteins resulting in the carbamylation of proteins like- carbamylated hemoglobin [7].

Carbamylated hemoglobin (CarHb) was first identified by Fluckiger et al. among uremic patients in the early eighties of last century [8]. It was reported that, carbamylated hemoglobin (CarHb), formed as a result of the reaction of isocyanate with N-terminal valine residues of α and β chains of hemoglobin (Hb), that was found in high levels in patients with renal failure [9]. Under physiological conditions, the level of isocyanate is approximately 1% that of urea [10].

Evaluation of carbamylated hemoglobin (CarHb) in patients with various degrees of renal function has shown that its measurement has potential clinical value [11-13]. Carbamylated haemoglobin has been found to be capable of diagnosing chronic kidney disease (CKD) and differentiating it from acute kidney injury (AKI) [14]. Carbamylated haemoglobin may provide a better index of chronic uraemic exposure than a single measurement of urea, as urea is subjected to day-to-day dietary and metabolic influences [15]. The aim of this current study was to evaluate carbamylated hemoglobin (CarHb) in patients with renal impairment and to assess its clinical value in the diagnosis of CKD.

This prospective observational study was conducted at Department of Nephrology, Bangabandhu Sheikh Mujib Medical University (BSMMU), Dhaka, Bangladesh from January 2019 to December 2019. A total of seventy (70) patients, who admitted in the Department of Nephrology, BSMMU, Dhaka, Bangladesh with renal impairment for the first time during the study period were selected following selection criteria. Adult patients (age ≥18 years) of both sexes with renal impairment for the first time (serum creatinine >1.3 mg/dl) was included in this study. Patient with pre-existing kidney disease (acute/chronic), patient with acute or chronic infections, patient with any types of malignancy, patients with severe anaemia, hypo-calcaemia, hyper-phosphataemia, hyper-parathyroidism, patients received blood transfusion in preceding three months and pregnant/lactating subjects were excluded from the study.

Following standard procedure 3 ml of venous blood was collected in a plane test tube from each patient. Then centrifugation was done at 2000-3000 rpm/minutes in room temperature (22°C - 24°C) for 15 minutes, plasma was separated by micro-pipette and discarded. Then the red blood cells (RBC) were haemolysed by adding cold distilled water. Carbamylated haemoglobin released after haemolysis of the RBC. Carbamylated haemoglobin was measured by modified Rosen’s colorimetric method [16].

According to *KDIGO 2012 Clinical Practice Guideline for the Evaluation and Management of Chronic Kidney Disease, CKD is defined as abnormalities of kidney structure or function, present for >3 months.

Criteria for CKD (either of the following present for >3 months)

1. a) Markers of kidney damage (one or more)

Data analysis was performed by Statistical Packages for Social Sciences (SPSS) version- 23. Quantitative data were expressed as mean with standard deviation (±SD), while qualitative data were expressed as frequency and percentage. The statistics used to analyze the data was descriptive statistics. The correlation between carbamylated haemoglobin (CarHb) and study parameters was assessed using Pearson’s correlation test.

Association between categorical variables was examined by chi-square test and continuous variables by unpaired t-test. A p value <0.05 was considered as statistically significant.

This study was intended to evaluate carbamylated hemoglobin (CarHb) as an early biomarker to predict CKD in patients with renal impairment. Table 1 shows the distribution of patients by study groups on the basis of developing CKD. A total of 70 patients were recruited in this study, among which 15 (21.4%) patients were developed CKD [group A (CKD)] and 55 (78.6%) patients did not develop CKD [group B (Non CKD)].

Table 1: Distribution of the study patients by study group (n=70).

Table 3: Distribution of the patients according to gender (n=70).

Table 4: Distribution of the study groups according to the risk factors (n=70).

Table 6: Comparison of carbamylated hemoglobin (CarHb) level between the group A (CKD) and group B (Non CKD) patients (n=70). 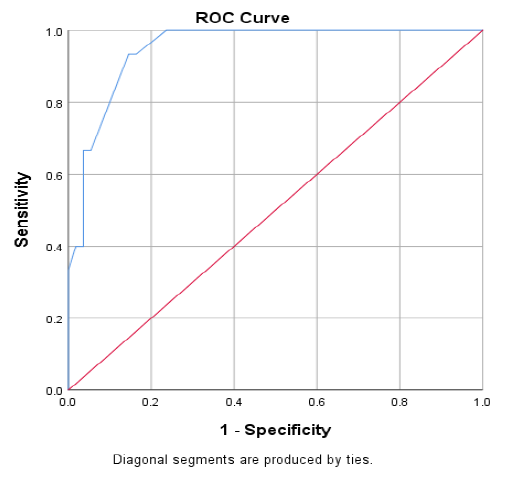 Table 7 shows effectiveness of carbamylated hemoglobin (CarHb) to predict chronic kidney disease (CKD). It shows that, a cut-off value of carbamylated hemoglobin (CarHb) was 101.5 µg VH/g Hb, the sensitivity was 93.33%, specificity was 85.45%, positive predictive value was 63.64%, negative predictive value was 97.92% and the accuracy of the test was 87.14%.

Figure 2 shows that there was weak positive correlation between carbamylated hemoglobin (CarHb) and serum creatinine in scatter graph. The Pearson’s correlation coefficient was +0.121 and p-value was 0.319 (Figure- 2). 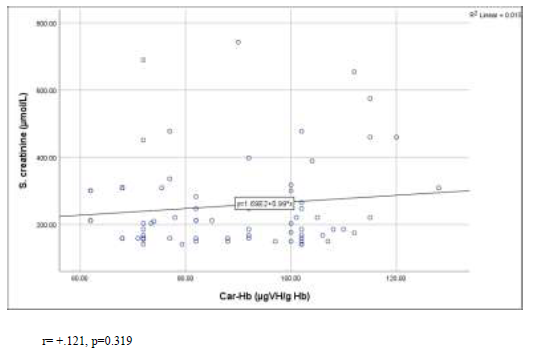 The scatter graph in Figure 3 displaying that, there was a significant linear relationship between blood urea and carbamylated hemoglobin (CarHb) in case of CKD patients and non CKD patients (p<0.001). But the Pearson’s correlation coefficient was greater (r=+0.865) in group A (CKD) patients than group B (Non CKD) patients (r=+0.674). 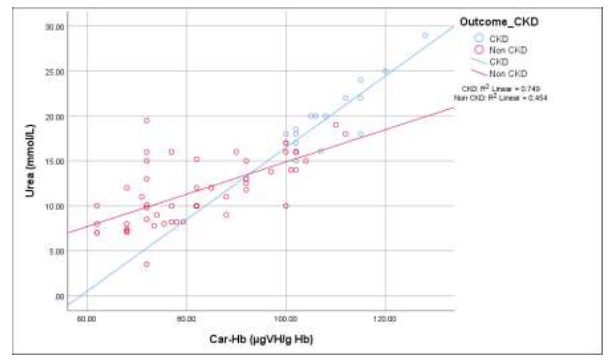 It is difficult in clinical practice to diagnose chronic kidney disease (CKD) among patients presenting with renal impairment for the first time with unknown kidney function in preceding 3 months and normal renal imaging [18]. The purpose of this current study was to evaluate the carbamylated haemoglobin (CarHb) as an early biomarker in the diagnosis of CKD in similar type of patients.

A total of 70 study subjects were enrolled in this study and out of which 21.4% patients had CKD which was consistent with the study conducted by Hasan et al. where overall prevalence of CKD among Bangladeshi adults was 17% [19]. In accordance another previous study reported that prevalence of CKD in Bangladeshi population was 26.0% [20].

In our study the mean age of the CKD patients was 54.47 years which was similar to the study conducted by Anand et al. where the mean age of CKD group was 49.50 years [20]. Almost similar finding was demonstrated in a related previous study where mean age of CKD group was 53.00 years [21]. This may be explained by as a part of the normal physiologic process; renal function (GFR) starts to decline even in a healthy individual after 30 to 40 years of age, which might deteriorate after 50–60 years of age due to structural changes in kidneys [22]. This increased prevalence of CKD among elderly individuals also can be explained by the higher prevalence of co-morbidities specially diabetes mellitus and hypertension among this group of people that are considered as important risk factors for developing CKD [23].

In this study, biochemical parameters of CKD and non-CKD patients revealed that there was no significant difference between these two groups and this may be due to patients with complications of CKD were excluded from our study. But there was significant difference between the groups in case of blood urea. This could be due to retention of nitrogenous waste products occurs as an early sign observed in patients with renal impairment and usually occurs before the appearance of other symptoms. Urea is one of the first worsening renal dysfunction nitrogenous waste substances that accumulate in the blood in renal disease and urea levels increase progressively with degree and duration of worsening renal function [21].

In this study we selected the patients with renal impairment along with normal serum calcium, serum phosphate, serum parathyroid hormone (PTH) levels and having no significant anaemia. Because these parameters are deranged from stage 3 CKD [17]. We included this type of subjects in our study to observe that carbamylated haaemoglobin level rises earlier than other marker of CKD. Patients with mild anaemia were accepted as most of our study populations were mildly anaemic without any organic dysfunction.

It was found that carbamylated hemoglobin level of CKD patients at first presentation was significantly higher (107.2 ± 9.3 µgVH/g Hb) than that of non CKD patients (86.2 ± 15.2 µgVH/g Hb). Similar result was observed in the study conducted by Okaka et al. where carbamylated hemoglobin level of CKD patients detected by colorimetric method and that was 107.5 ± 16.2 µgVH/g Hb [16]. A couple of similar previous studies also revealed significant difference of cabamylated haaemoglobin (CarHb) level between the CKD patients and non CKD patients [9, 13]. The plausible explanation for this could be; the higher the duration of exposure of reactive protein such as haaemoglobin (Hb) to urea concentration, the higher the amount of carbamulated haaemoglobin (CarHb) obtained [13]. It results from non-enzymatic post-translational modification of haaemoglobin by isocyanic acid, the reactive form of cyanate derived from the spontaneous dissociation of urea [9].

The current study showed that, cabamylated haaemoglobin (CarHb) has a weak positive relationship with serum creatinine level but strong positive correlation with blood urea. This type of correlation was found in the related previous studies [13, 16, 21, 26]. It may be explained by the fact that urea is the first nitrogenous product that is retained in blood in renal disease and urea level increases progressively with duration and worsening of renal function [26]. It was reported that, constant exposure of hemoglobin to increased urea levels results in the increased level of carbamylated hemoglobin (CarHb) [21].

According to KDIGO guideline; to define a case as chronic kidney disease (CKD), it needs to be persistence of any of the marker of chronic kidney damage or GFR<60 ml/min/1.73 m2 at least for 3 months [17]. Following these criteria to level CKD, it may be delayed in diagnosis and specific management of CKD. But in our study it was found that, the patients with first presentation of renal impairment whose other parameters revealing CKD were not significant but level of carbamylated hemoglobin (CarHb) was significantly raised among the patients with CKD.

This study concluded that the patients with CKD had significant higher level of carbamylated haaemoglobin (CarHb) than patients without CKD, before appearance of other biomarkers of CKD. Therefore, carbamylated haaemoglobin (CarHb) can predict chronic kidney disease (CKD) much earlier than the conventionally used biomarkers for CKD. Further studies will be warranted to elucidate the fact.

It was a single centre study with a relatively small sample size and the study was done in a limited time span.

Further multi-centered prospective study with large sample size should be done to establish the carbamylated haaemoglobin (CarHb) as an early biomarker of CKD.

The authors declare that they have no competing interests regarding the publication of this article.